Mixing Science and Theater In The Classroom

I was asked to co-teach a class that would, over the course of the semester, create a piece of devised theater around an environmental science topic. This is the first of three posts detailing that experience.

The first day of class, I have no idea what to expect. Though the college is a small one—only about 1,500 students—some of these fourteen undergrads have never met. That’s because the class is split almost right down the middle between theater majors and environmental studies students, with a few crossovers.

We spend the first half of our two-and-a-half hour block talking. We discuss what the environment means to us—how we define something that is at once all-encompassing and deeply personal. We talk about what live performance can bring to the realm of science. And we talk about what we’re getting ourselves into—devising a work of theater focused on an environmental science topic over the course of an all-too-brief semester.

It was less than a year ago that I was approached to assist in the creation of Washington College’s first Devised Theater/Environment course. I was to co-teach the class with drama department professor Dale Daigle and co-chair of the biology department Martin Connaughton. The class is a product of Washington College’s SANDBOX—a Mellon grant-funded initiative devoted to finding ways to merge the arts and the sciences.

It is unsurprising that such an initiative has found a home at Washington College. Nestled in the Chester River watershed of Maryland’s Eastern Shore, both the school’s science and theater departments have experienced significant growth spurts in recent years.

During our first conversations together, Dale, Martin, and I had plenty of questions. What kind of performance were we looking to create? What would the syllabus look like? How much interest would there be in the course? Was it even possible to create something that would be both scientifically interesting and artistically complex in such a short amount of time?

While some of these questions would remain well after the class began, the latter I answered immediately: “Yes. It’s absolutely possible.”

A Washington College alumnus, I have some modest experience with devised theater, having led devising processes for the now-on-permanent hiatus Bright Alchemy Theatre Company and with high school students at Imagination Stage.

So I knew it could be done.

How we would go about doing it was another question, one that we have yet to entirely answer.

That first day we have a much more immediate question to answer: Did this mix of drama and science students have the capacity to merge together into the ersatz devising company we needed them to be? Would they be open-minded, generous, and willing to play? If not, the entire semester would be an uphill process.

After we finished the discussion portion of class with Martin giving them their homework and the next week’s reading, Dale and I take over. This is how we planned for the first few weeks to go—heavy on the science, light on the theater, then reversing proportions as we got farther into the semester.

We split them into four groups, give them two minutes, and ask them to create fire, water, air, and earth. It’s a simple, potentially very silly exercise. The point is to get them on their feet, working together, and to set a precedent for thinking abstractly about concrete concepts.

The results are highly theatrical and downright witty in how they subvert what we think of as the qualities of the four elements. If you ask me to identify which students had three years of drama classes and which spent most of their day in the science building, I would fail miserably.

At the end of the first day I feel confident that, while the remaining questions are large and numerous, we have a group that’s up to the challenge of answering them. 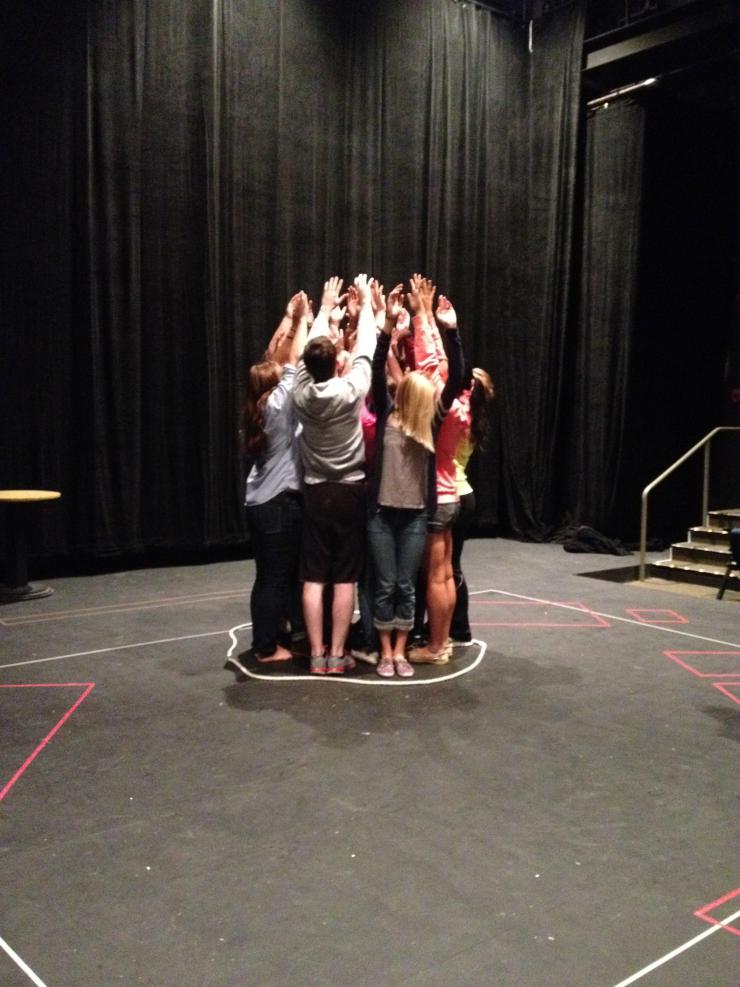 The next few classes are heavy on the science. Martin assigns essays, videos, and case studies that examine specific examples of humanity’s impact on the world and how we as a society have addressed it.

We also have a guest speaker—Rebecca Fox, assistant professor of environmental science—who speaks in great depth about her research into nitrogen levels in Eastern Shore watersheds. While the science involved is highly technical, the students (and teachers!) follow along intently, amazed at the complexity involved.

We are constantly being surprised by just how deep our personal impact on the environment is. And just how difficult it is to course correct, both on a personal level and a global one.

While Martin has his portion of the syllabus planned out from the start, Dale and I work more by feel—assigning (sometimes creating on the spot) devising exercises in response to what is sparking students’ interests. This is one way of reconciling the inevitable conflict that arises in fitting a devising process into an academic environment—creating flexibility in what can be a very rigid schedule.

One of the readings that has the most impact on the class is The Tragedy Of The Commons by Garrett Hardin. Published in 1968, it lays out the foundation of conservationist thinking in regards to resources and population growth: There are not enough resources to go around, and without careful thought and sacrifice, our species will not survive.

We dig deeper, asking the students to come up with personal examples of the Tragedy of the Commons in their own lives. It is incredibly easy to do so.

Martin breaks them up into groups that are meant to simulate separate communities, with each student representing a family in that community. In order to feed their imaginary families, students fish from a community fishing hole (played convincingly by a bucket of candy). They need a certain amount each round to survive, but the fishing hole replenishes at a very limited rate.

Despite having read about the mistakes of lost civilizations, several groups’ communities collapse almost instantly due to a mixture of hasty decisions, greed, and the mischievous desire to push a model until it falls apart. Those who succeed in creating a sustainable model do so only through great forethought and plenty of communication between group members.

Not only is the exercise a model of the tragedy of the commons, but it demonstrates the necessary qualities and inherent pitfalls in creating a devised piece of theater.

However, while we’re becoming convinced as a group that we can—and will—successfully create a performance together, the more we explore the science, the harder it becomes to imagine a future where mankind survives its own wastefulness.

At the end of that first month, we still didn’t know what this show is going to look like. But we know it will almost certainly center around this deceptively simple concept: Small actions by individuals add up to lasting damage to the environment, and to reverse that damage much more than small actions are needed.

Now we just need to figure out how to put perform it.

At the risk of becoming even more marginalized than I already am, I feel morally bound to point out that this (otherwise quite interesting) essay significantly misinterprets the lesson of "The Tragedy of The Commons".

In reality the lesson is that having a "commons" that everyone can use as much as they want for free (or without paying any extra) eventually results in destruction and starvation.

Much as if you and your neighbors had a common credit card that you split the monthly bill with equally no matter how much or little each person used it. Eventually people will start charging more of their monthly expenses (and frills) as they see someone else seeming to do so, until the monthly bill swallows up everyone's entire income (and still doesn't pay off the principle and interest).

(In fact, this is exactly why the federal government is in such tremendous debt -- the people that each congressperson represents gets the same share of the bill no matter how much they spend, resulting in runway spending.)

In the fishing hole example, the idea would be various families or groups have separate fishing holes, and are thus motivated to make sure they don't overfish them.

Having a "commons" approach to any resource results in overuse and destruction in the long run; private ownership encourages long-term thinking.

Of course, this isn't what we are taught in our government-run schools or by the politician-worshiping media. Nor is the true meaning of Thanksgiving (which was yesterday as I write this), which was to celebrate the abundant harvest brought about by changing the farming system from a commons to divvying up the land and allowing those people (families) who worked their share of the farmland harder to have more.

In fact, they had so much that they were able to share freely with their neighbors and the native Americans in the area, resulting in the first thanksgiving.

I strongly suggest that you do something along these lines. Yes, you'll probably get reamed by most theater people (alas), but that's the price of enlightenment in the age of darkness we currently live in.

"the more we explore the science, the harder it becomes to imagine a future where mankind survives its own wastefulness"

The problem is not with your imagination, or the science, but with your not understanding the true nature of the problem, even though the evidence is all around us.

There would be massive abundance if the government didn't spend hundreds of billions of dollars each year on death and destruction (war).

Further, if someone dumped polutants on your private home would you just let it slide? Unlikely. but the government permits the pollution of the air, oceans, open fields, etc all the time. Why? Partially because they are so corrupt, but even more fundamentally because the air, ocean, and land not owned private are all considered -- tragically -- "the commons".

Thanks for the thoughtful response, Neal. Much of what you say here was brought up just as passionately by our students.

Later rounds of the fishing hole exercise actually include options for creating smaller, private fishing holes so that the students could use a combination of public & private resources. It was finding a balance between the two that students eventually found a sustainable solution to the challenge posed by the exercise.

Playwright and professor Theresa May talks about creating a show about the planet, Sky Woman, and the Youth Climate Movement, and how collaborating with students enhanced the development process.

A River and Recovery in Many Acts

Maine artist Jennie Hahn explores environmental stewardship in Maine’s Penobscot River Watershed with the performance project IN KINSHIP and shares her three guiding principles for making art in a time of climate change.