The Devotional Re-Creation of Tragedy in Spades

Towards A New Stagecraft for Nostalgia

It’s Friday night on the Lower East Side at University Settlement, early slate-gray April, and a small audience has gathered to watch the opening of a play called Tragedy in Spades: A Crime Documentary. Or, as director Katherine Brook and writer Liza Birkenmeier tell us in programs dispensed at the door, it’s “a re-enactment piece,” based on a VHS tape found in an antique shop in Missouri by Birkenmeier. If you like petty intrigue, this might be your bag; the cover of the salvaged VHS titillates:

OBSESSED WITH A MURDER IN HER RURAL TOWN, VETERINARIAN AND AMATEUR FILMMAKER LORNA DAS UNCOVERS SOME OF THE HARROWING DETAILS THAT LED TO USPEAKABLE TRAGEDY IN THIS THRILLING 1994 CRIME DOCUMENTARY

The typo and perma-caps appear intentionally translated and it’s a trashy description; the evening is a hoax. But the performance space we enter is decidedly lacking in smoke and mirrors, as juxtaposed with the lurid proposal in the program. No pop or irony on display, just open pea green curtains framing a room void of set—save the small table down center for a script and mic, large speakers turned away from the audience, and some chairs that form an arc facing the upstage. The vibe is minimalist, not-chic, more AA meeting than gallery. When the actors stream on stage they wear plainclothes and begin to perform a choreography that feels analogous to a religious service. Choosing to reconstruct this material, the team mythologizes a tacky-sad news headline and makes an original ritual. What are those bearing witness being inducted into? The opening moments register insular; we’ve been invited, but the participating re-enactors don’t necessarily know how to put on a show, only how to lift up their hearts to the task. The idea seems to be: we will absorb you, not by virtue of plot, but through this model of devotion. 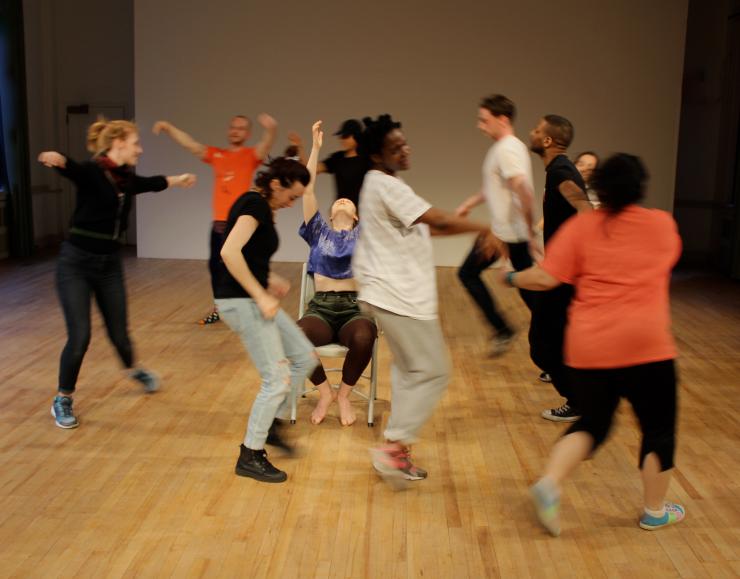 Through time and technique, Tragedy in Spades is removed several degrees from its origin story in order to not just show us the murder of nineteen-year-old Holly Spade, but to teach it like allegory. Our subject is a girl almost average in her goodness; an Everygirl, the tropes of her life are stock. Born and raised in a God-fearing small town to a fanatical mother and stoic father, Holly is a precocious student, active in school and gymnastics, apparently sexless. We meet her in pre-teen poses, performer Katiana Rangel hitting three marks along the upstage white wall, hands-on-hips, framed by a rectangle of light communicating the shutter or album display of photograph, photograph, photograph. Eventually Holly escapes to New York; eventually, maybe, she comes back home. Either way, by the time we meet her, she is no longer.

One magic of the theatre: that a live body can stand in for the dead, and for that moment we agree they are alive again.

The magic of theatre: that a live body can stand in for the dead, and for that moment we can agree that they are alive again.

This cautionary tale of bad omen in return is only one of Spades’ clever tragedies and feels specially delivered to those who flee to cities, seeking respite. Anyone who has ever escaped the milieu of rural decline knows the cliché “You can never go home again;” here the wry gives way to foreboding and the actual horror implicit in that claim. The set-up is reminiscent of Twin Peaks, yet the execution is arid, less glossily arch, with the exception of deadpan musical tracks provided by composer Chris Giarmo. Catchy and washed out, I’m still hearing these tweaked Muzak-esque hooks as I write. Moments of hypnotic goofiness appear too, like when the cast re-stages footage from one of Holly’s dance competitions or Lorna Das records the choir (“Let Christ light up your way…”) at Holly’s former parish. It’s the excruciating awkwardness of prolific, unaware mediocrity in real time. It’s one of my favorite things to experience. That, and beauty, which is also a reason to write and record this time spent in the dark with a show. 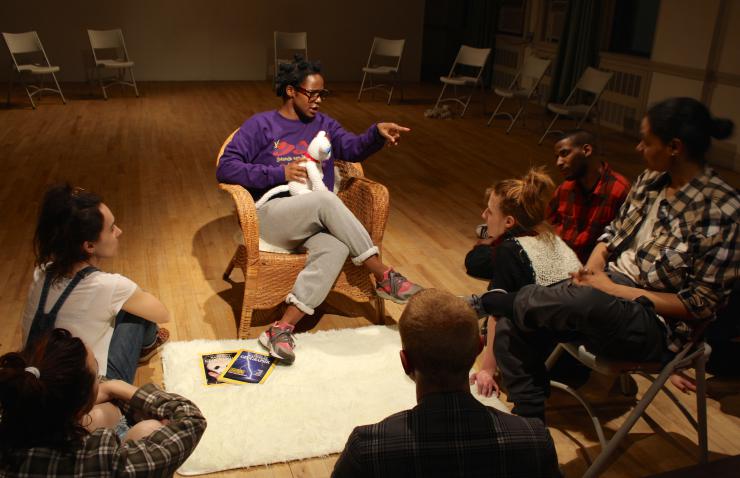 In his 2002 essay “American Beauty,” outsider art critic Dave Hickey writes about the relationship between democracy, art, and attraction. He thinks through the objects people decide to gather around and what calls them to circle. This is the promise:

If beauty does exist as a category of value, the cognitive priority of embodied signs more or less guarantees that the pleasant surprises we experience in the presence of art will function as a hedge against habit and rhetoric—will routinely preempt the blandishments of vested interest, tribal authority, transcendental religion, metaphysical ethics, and abstract philosophy.

It’s a dangerous concept, everything Plato was very worried about for good reason—seduction by aesthetics. And yet I come back to Hickey’s beautiful, persuasive sentence when I reflect on Birkenmeier’s transcript of this found VHS, her observational incessancy drawing me near. The comprehensive, intricate task of recreation she performs in writing is not so unlike the investigation pursued by her humble protagonist Lorna Das. Both women attempt, through journalistic-cool image capture, to answer a relatively local question that grows in cosmic significance through tenacity: Who killed Holly Spade? becomes Where am I?

Both women attempt, through journalistic-cool image capture, to answer a relatively local question that grows in cosmic significance through tenacity: Who killed Holly Spade? becomes Where am I?

Alex Spieth, one of Spades’ dozen re-enactors, speaks the first shot, no credits:

Grass along a gravel road.
A confederate flag waves in front of a newly renovated farmhouse.

Low hills, an abandoned train car,
a pile of cobwebbed firewood,
a man in a t-shirt with a sunset graphic, the sleeves cut off.

Two women stand in front of a bait and tackle shop,
both in acid wash jeans and eyeliner.
One drinks from an orange can of Vess Whistle.

Meticulous description is served at a one-to-one ratio with illustrative gesture—that’s roughly how my partner describes it when I go to see Spades the second time—and the flurry of moves is a physical reminder of how much there is to take in, Birkenmeier serving as camera conduit. This equation initially gives the work a sing-song cadence, ideal for learning the alphabet. A show-and-tell tack makes the staging strategy at turns whimsical and perverse; players embody a horse, a cat, an oscillating fan, the letters S-P-A-D-E lifted off a cross stitch, a shelf of trophies and a fetus on an anti-abortion billboard. Physical compositions feel derived from the material of children laughing, a double-sided icon of innocence and haunting. When that nursery rhyme rhythm is parsed critically, I infer that this is how you make a stagecraft of nostalgia in the poor theatre idiom, without hazers, foggers, physical montages set against filmic soundtracks; the dissolution of the action-to-text symmetry is the completion of Brook’s directorial proposition. Symmetries become inconsistent as time passes, it’s slippery and we are in the woods with Lorna, in the unknown. I stop understanding how bodies got where they were going and density falls away.

I found this to be a fascinating and provocative piece. In one regard, it's so personally anecdotal/experiential that it feels like I witnessed this performance, and yet my detachment from actually experiencing the re-enactment allows for larger ideas on ritual, staging, and the power of physicality in theatre to surface, too. This is my second time reading it today, and I'm taking away even more. Thank you.

Thanks for responding Brent. My personal favorite "personal" art critic is Chris Kraus. You should check out her collection "Where Art Belongs" if this approach appeals to you. Sometimes she writes about performance, she writes about all kinds of art. If you ever are in New York, we should take in a show together.

Pay Attention to the Men Behind the Curtain

Amelia Parenteau deconstructs the use of technology in The Builders Association’s production of Elements of Oz, an adaptation of The Wizard of Oz, presented at 3LD in New York City.

Sound designer Victoria Deiorio reflects on her experience of Complicite’s The Encounter and its ingenious use of sound.