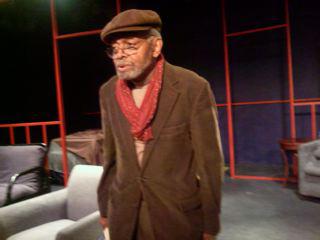 I feel fortunate to have had a few meetings with Amiri Baraka over the last few years in the city. They were not at necessarily political events, nor did I experience a "militant" disposition. I found Baraka a very kind and gentle soul. He was encouraging and funny.

The first time we met was April 21, 2008 following a Master class he gave at Cherry Lane Theatre, where his Obie-Award winning Dutchman premiered in 1964.

There was so much he said that evening about theater and working at the time that he had experienced. I wrote down so much of what he said that night. I guess his comment about Broadway Theatre being mundane was from a revolutionary mindset, but Broadway isn't for everyone…

I learned a lot from him that evening, many things I had read in books, but hearing these words from the man himself was a completely different experience. He spoke about being able to grade your own work, and having to be a little arrogant to be an artist. The theater is an exciting place and he knew that one could not write about boring topics and use boring language.

He spoke about working with music in one's work, and being intrigued by words coming out of people's mouths in a play, which is different than what happens in poetry. He also spoke of leaving the village [downtown, NYC] after Malcolm X died.

He referred to the race issue in Dutchman as more of a class conflict. 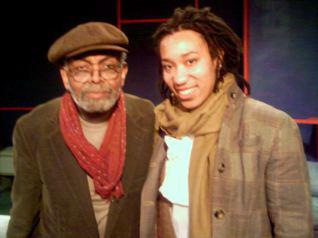 I sat next to an older woman and we chatted a bit before he began. I mentioned to her that I began writing because of Baraka. She knew Baraka and when he finished and there was the opportunity to shake his hand and say hello, I went up.

I had no idea what I was going to say. Plus, I stutter, so who knew what was going to come out!  Luckily, my new friend that evening, Vinie Burrows, made the introduction.

The next thing I knew, the three of us are at dinner in the area. I don't even remember if I ate. How could I?! I was at dinner with people that literally paved the way for what I was doing in the city. Hard for some to believe, I know, but I did a lot of listening and not much talking that evening.

Baraka had given me his card that evening and I promptly emailed a thank you.

I was more serious about my daily journal in those days.  Some of my notes from that evening were:

[…] I am on the train [home], it is 10:55pm—Amiri Baraka took me to dinner.  There are few people I'd be geeked to meet or who would turn me to tears…there was a moment when I almost started crying…it is so true about the serenity in my life.

Over the months and years that followed, I felt fortunate to be on his email list and receive a few encouraging exchanges about getting my work out there. I was even told that he made a comment about me and my reading series once, which to a young playwright in this city, where many can feel swallowed whole, means a lot.

I was lucky enough to meet his wife, Amina at a production of The Toilet that I wrote a review for during the summer of 2008.  We had another interaction following the grand funeral of Dr. Barbara Ann Teer of the National Black Theatre.

The news of his death was sudden to me, as it may have been to others, having not known he was in the hospital. Some might say that we are to accept death as natural once a certain age is reached, but that doesn't change how one feels when it happens. No one is prepared for death and I feel we have lost a great writer and thinker who was still very active in his own Newark community.

Mr. Baraka and I were a bit out of touch after I married and began a new life as a wife and mother, but I was thrilled when he met my husband at his Jazz Series this past fall.  He was there to support his friend, Charles Tolliver. I emailed Baraka in October and received his usual thoughtful yet short reply, congratulating me on our daughter, and that was it… our last correspondence.

I am not blind to the controversy caused by much of Mr. Baraka's work, but that is not necessarily the man I met. I had directed his work, both staging poems and a production of Dutchman with Black Curtain, the Black Theater group I founded at Indiana University (on a predominantly white campus, no less).

The black theater movement was because of this man and as a black playwright, it is important to know his work and to know the work that spans beyond theater

The black theater movement was because of this man and as a black playwright, it is important to know his work and to know the work that spans beyond theater; Baraka’s poetry was highly influenced by the Beat poets prior to his work as a playwright. A favorite college English professor of mine, Dr. Margo Crawford, really turned me on to the Black Arts Movement and I will be forever grateful. Dutchman was one of my first introductions to LeRoi Jones as a playwright while an undergraduate theater student at Indiana University.

I was able to meet and spend time with one of the people that gave me the inspiration to continue in the theater as a playwright.

Death does not change one's past. It further solidifies one's legacy, and Baraka's past is a colorful one to say the least. I was under the weather the weekend of his wake and funeral. I was very disappointed I could not attend, but I honor him here and will never forget how he touched my life.

No matter what anyone has to say, Amiri Baraka was a brilliant writer and a unique voice for his generation and the ones that followed. He will truly be missed.

This episode explores the recent revival of Ntozake Shange’s for colored girls who have considered suicide / when the rainbow is enuf, directed and choreographed by Camille A. Brown. Hosts Leticia Ridley and Jordan Ealey contextualize the production, its ongoing relevance and legacy, and its resonance in Black feminist theatre, dance, and performance.

Thanks so much for sharing this with all of us! I know how isolating it can feel to be home with small children, and it is great to see that you are keeping your hand in as much as you can. It will all come back to you!