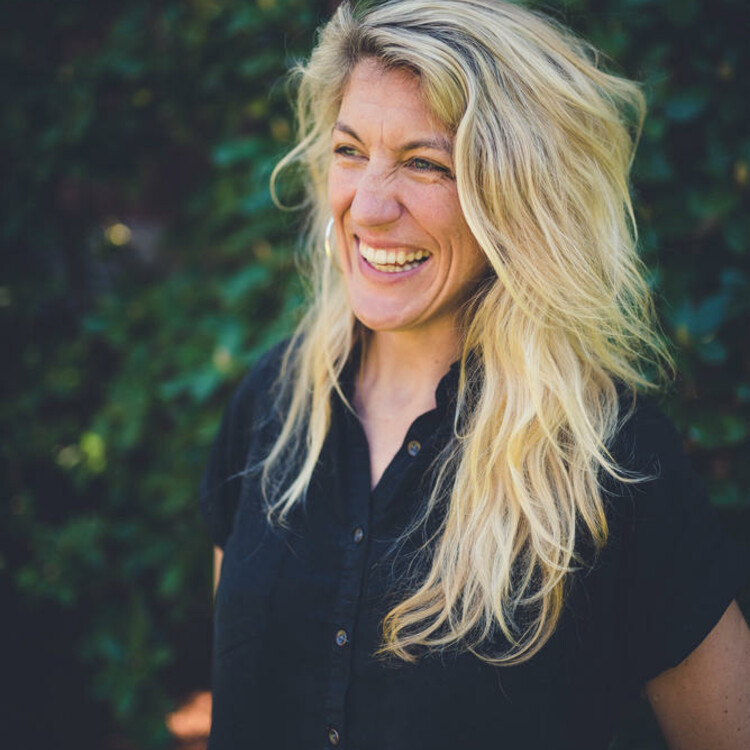 “My body is one with the bike,” says the kid. The kid is played by one to two to three or more performers in Caridad Svich’s Red Bike. Svich calls this play an open text, which means that when it comes to cast size, performers, character breakdown, and more, it is up to the artists interacting with the text to choose.

Svich’s line on the page stands alone, glowing from my computer screen. There are double spaces above and below it, sans punctuation. As with the body and bike, the invitation of this script is, as I see it, a chance for performance and text to unite... But how? How do theatremakers, specifically directors, consider scripts that invite us, in various degrees, to take part in assemblage and interpretation? How do we as makers and audiences embark on a journey into this kind of work? From texts with preambles asking for moments of dissonance, to texts inviting the restructuring of the presented order of events, to texts that ask the director to choose the number of performers because there are no set characters, to texts that offer no explicit stage direction—all of these require unique attentiveness from the makers who are engaging with them.

The concept of an open text is an ephemeral and shifty one. This past February, I was set to direct Red Bike in Rhode Island as part of the National New Play Network’s Rolling World Premiere, and, after talks with Svich, I wanted to understand and work with the concept more clearly. Through research, I found the term’s origin in semiotics via Umberto Eco and Roland Barthes (in reference to Barthes’s essay “The Death of the Author”). Barthes believed in the idea of a scriptor rather than an author, implying open texts are texts that allow multiple or mediated interpretations by readers. In the case of open texts for performance, they are ones that allow mediated interpretation by a director, a creative team, and an audience. 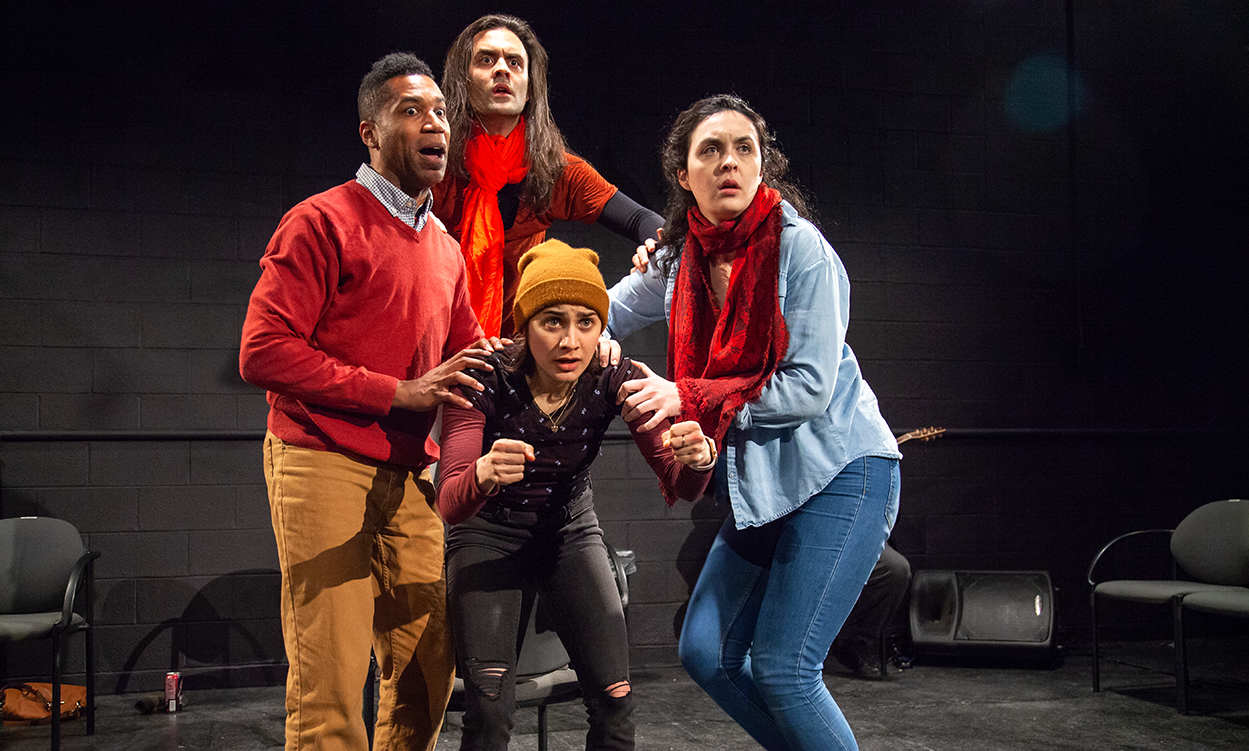 Open texts are documents that live somewhere in the realm between playscript, foundation for devising, instruction manual, deeply specific code for construction, narrative, manifesto, and call to action. Examples are subjective. In my view, they range from Sarah Kane’s 4.48 Psychosis to Caryl Churchill’s Love and Information to Peter Handke’s Self-Accusation to new work like Eric Marlin’s and come apart. Open texts can be funny, caustic, opaque, messy, chaotic, didactic, probing, and incendiary. Their challenges—from form to content—ask directors to flex unique interdisciplinary muscles as storytellers and activate their dramaturgical minds and intuitive hearts differently than when working on formal plays.

In the preamble to Alice Birch’s open text, Revolt. She Said. Revolt Again., Birch writes, “Most importantly, this play should not be well behaved.” Handke, in pieces like Offending the Audience and Self-Accusation, purposefully rejects what he refers to as “traditional play structure” to reinforce his “anti-theatre intention.” In Elfriede Jelinek’s preamble to her open text Sports Play, she writes, “The author doesn’t give many stage directions, she has learned her lesson by now. Do what you like.” Birch’s ask, like Jelinek's, seems to imply a call for liveness and invitation. As Jelinek shared in an interview with Simon Stephens for The Stage, “A play is never the product of the author, it is at most half, if at all, his or her work. It only comes into being through collaborative teamwork.”

Open texts are documents that live somewhere in the realm between playscript, foundation for devising, instruction manual, deeply specific code for construction, narrative, manifesto, and call to action.

So, without precedent or prescription, how do we as makers approach the open text form? In Red Bike, my approach involved meticulously re-reading the text multiple times. It meant getting deep into research about the Olneyville and Providence community where I was staging the piece. It meant trial and error in line division and voice work, throwing a number of experiments—assertions and impulses, actions and movements—at the story. It meant occasionally failing, starting over, and embracing imperfection, as well as being respectful without being precious. The structure of the rehearsal room was freed from prescription while still formal. We were more collaborative. After I released my anxiety about perfectionism, the experience rekindled playfulness and humility in me as a director. The process made me wonder if working with open texts might free other directors into periods of evolution and growth as leaders in our rooms.

In my work with Red Bike, another question I ran into was how do we maintain respect for the script even as it opens itself to unique interpretation? I found that showing the text respect meant becoming its adversary, best friend, lover, confidant. The playscript became an object—more alienated and yet more sacred—a catalyst, a tool, a talisman. It shape-shifted and got personal. Red Bike asked me to meet and create boundaries with it as much as it created its unique boundaries with me. The rehearsal evolution felt at times organic, at times obscene, at times like a treasure hunt, and at other times like—as in many great theatre moments—a transcendental experience. As the kid becomes one with the bike, so we as a company became more personally ingrained in the text. 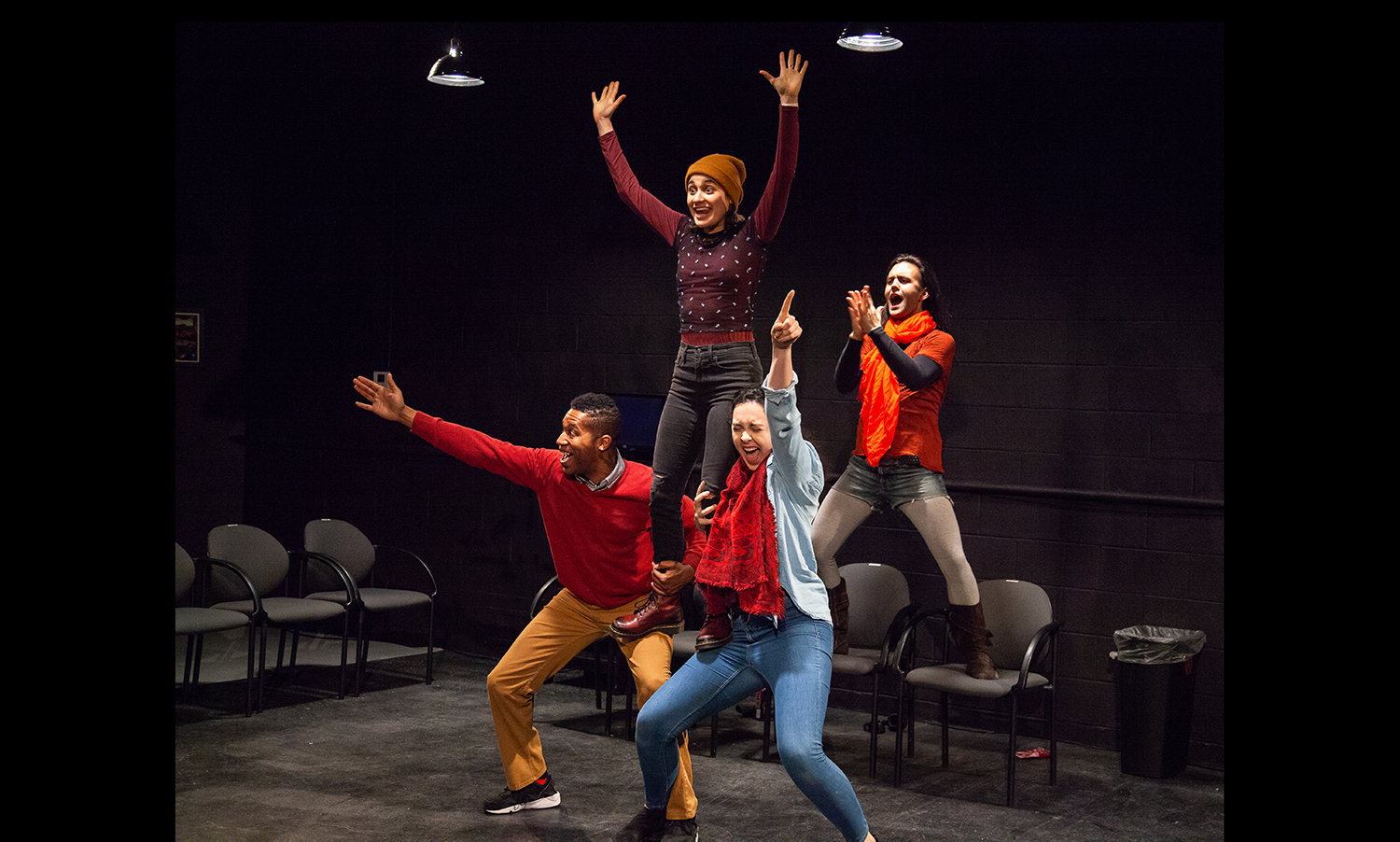 During the process of directing Red Bike, I spoke to old friends, colleagues, and collaborators at length about the frustrations, challenges, and excitement of directing an open text. I was also in the unique situation where, amidst trial and tribulation, I could speak to Svich herself via email or Skype. I recall asking her: How do I provide clarity for the audience amidst the kid’s nonlinear narrative? How many performers is too many? Why have more than one? Is the space between lines on the page signifying breath, breath and a sharp turn, a slight pivot, or just consideration? Is music going to oversaturate or keep the audience engaged?

These questions rendered me vulnerable. As a director, it was the engagement with impulse, local culture and community, and this vulnerability that created the lifeblood that invigorated the performances themselves. The act of telling the story as an open text asked for radical dreaming and resilience. I worried: Where is translation transgression? I found answer-adjacent notes both in communication with Svich and in my gut. Aesthetic on the page had a lot to do with breath. Musicality would, in some clauses or chapters, debase the intent, while in others it would make the text fly. In some ways, the text was like a child who has moved away from a parent: it had a life of its own, free from both my desires and Svich’s. It was not always useful to search for right answers, especially intellectually. The right answers appeared from trial and error, from presence and intuition, from experiments and patience.

How can the idea of an open text, even as it manifests idiosyncratically, further decolonize our minds and hearts as makers and audiences?

The conception of communion and translation around this text also intrigued me. Red Bike roughly centers around a kid processing their town and their future on a revolutionary bike ride. Who is the kid directly addressing? The audience. But who is the audience? That question in and of itself challenged our creative team to examine brittle assumptions and excavate our biases. Working on Red Bike, I discovered that translating moments to Spanish released the experience from a sense of false whitewashing in the multilingual audience’s idea of the “kid.” The translation invited audiences to engage with questions of their own biases, socialization, and childhood experiences. 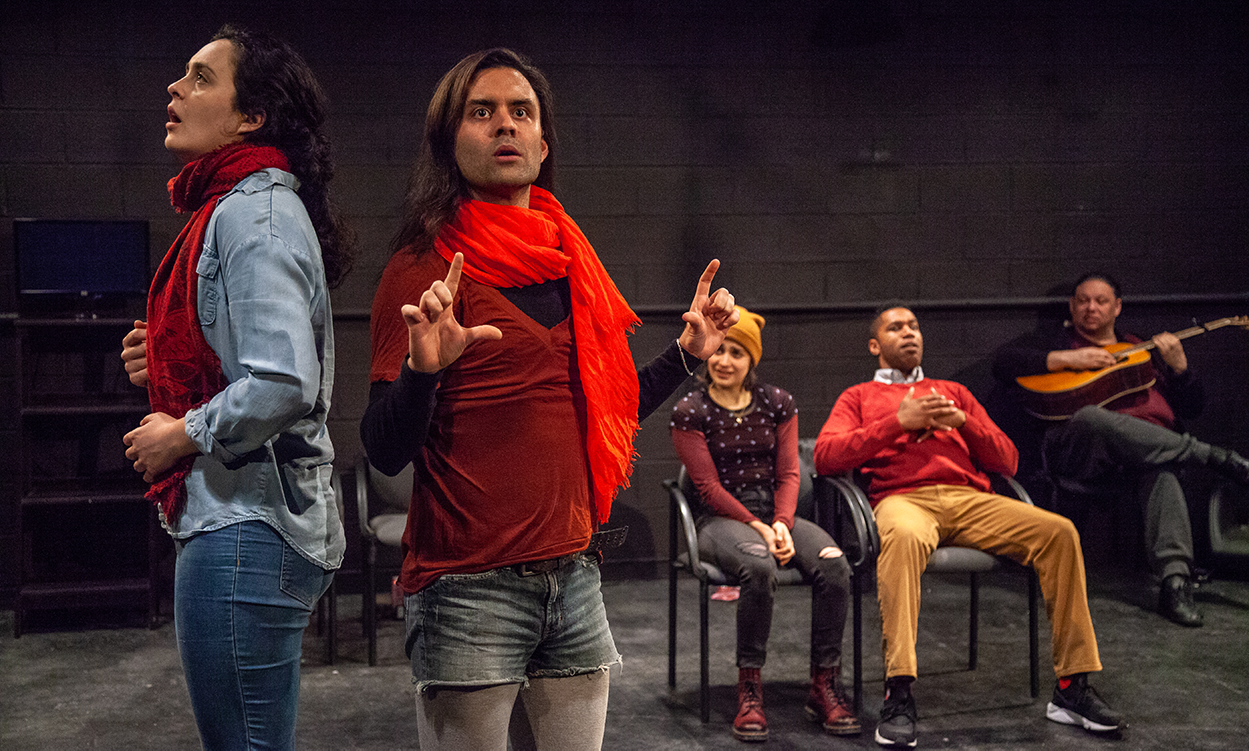 I am also curious how encountering an open text like Red Bike might free us, as an Ameircan audience, from our relationship with authoritarianism and authority. We have this idea that the most powerful voice is always right and that the loudest speaker should be feared and kowtowed to in our current political climate. In our theatres we envision and demand that not only the play but the playwright be the primary authority. But because the open text concept slightly alters the jobs of all the collaborators in the room creating the play, it also alters the audience’s perception of the play: rather than seeing it as dependent on the stalwart hierarchy of writer as sole author, they understand it as an innately collective creation. Practices like working with open texts might help, via collective imagination, re-direct a capitalist obsession with perfection in our country and disassemble disenfranchising practices on our stages. How can the idea of an open text, even as it manifests idiosyncratically, further decolonize our minds and hearts as makers and audiences?

Directing Red Bike reminded me that, metaphorically, a director's job is twofold. A director serves as the conductor of any variety of instruments culled forth in the interpretation of unique and varius symphonies (or scripts). A director also serves as farmer—planting, cultivating, and reaping what they sow in a rehearsal room and community, hoping for presence and liveness of organic, living theatrical material. In essence, my job on Red Bike was an exercise in balance. It was—like learning to ride a bike can be—joyful, scary, dangerous, and imperfect. It mirrored the way we, as artists, as citizens, must navigate the trials and tribulations of an ever-corporate, authoritarian world. I learned there is not always one “right way” to interpret and invigorate the text, but that, just as interpretation and invigoration are radical acts in the moment, they must first be about opening ourselves up to collective interdependence in a living, breathing process.