Do I Dare | HowlRound Theatre Commons Skip to main content

In the fall of 1993, I started my MFA in Dramaturgy at the School of the Arts of Columbia University. These were my insomniac years. Between lack of sleep and the coffee-n-bagel diet, my memory is pretty sketchy.

I remember halfway through my first term I forced my dramaturgy professor to admit he didn’t know my name. There were six of us in the class. As I remember it, later that that same day, a directing student blamed me for his project not going well, and the room erupted in dire warnings against dramaturgs. And, well, I lost my temper. I went home and started packing, only to be tracked down by Shirley Fishman who had been sent to assure me, “Andrei Serban thinks you have chutzpah.”

I remember standing on a chair, yelling at a very important New York theater manager, and I don’t regret it and have stood on chairs since. I remember being blind-sided at my first end of semester review when told I was a disappointment. I remember being assigned to moderate a talkback after a student reading with Tony Kushner as a guest — this was when Angels in America was happening right now—and it got back to me that a faculty member was trying to figure out how to remove me from the moderator slot because I could not be trusted. So much for the glow of the chutzpah remark carrying me through school.

Over the summer, I took a German translation class because I thought it would help me understand the German that my professors would lapse into during class. It didn't, but I translated “The Love Song of J. Alfred Prufrock” for my final, and in the years since have often told people to read Prufrock (German or English, your choice) if they want to understand my questions about the relevance of the profession of dramaturgy—lines 111-119 in particular.

I went back to Chicago (got the hell out of Dodge) to do my internships, got back my job in the Steppenwolf box office, slipped in where I had left off, and started freelancing. In those first five years out of school, I made maybe two hundred and fifty bucks for all the shows I did, but it was a great time, and no one else was getting paid, and I was young enough to have the energy for a day job and to then run around loving theater all night. I made more money later, then got a full-time dramaturg gig, and realized I still had no idea what I was doing.

Go to grad school because it’s something you want to do for yourself, not because you think it will get you a job.

I’ve told anyone who will listen to wait to go to grad school. Go to grad school because it’s something you want to do for yourself, not because you think it will get you a job. I’ve shared my reservations about pursuing a dramaturgy MFA in particular, which I do not believe matches up with the expectations or needs of theaters or of dramaturgs even if you do get a job. Is that a hint of regret? Do I dare disturb the universe?

My undergraduate experience at Tufts (Go Jumbos!) was wonderful. Nurtured and encouraged by many professors in the history and drama departments, I floated around finding myself. I thought grad school would be like that. I should have waited until I was a bit more found. For a long time, all I could remember about my time at Columbia was the frustration, crippling self-doubt, and insomnia. Maybe that’s just grad school.

Would I be where I am without Columbia? Probably.

I actually laughed out loud when my friend, Christian Parker, now Chair of the Columbia program, pointed out to me that I’m held up as a success story in the acceptance letter to incoming dramaturgs. The transformation from “disappointment” to “success story” has had little to do with my time or what I learned at Columbia, and more to do with chutzpah.

Was it worthwhile? I’m still not sure.

I remember Anne Bogart talking about deciding what to say as she walked slowly from the back of the theater to the front. I have been able to talk to that director about the actor transforming when they crossed into the square painted on the floor…liminal, magical space. I remember Linda Winer’s important lessons about researching and thinking before you criticize. I can drop Weltanschauung and Scheinwissen into conversation. 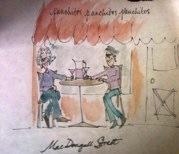 I remember sitting in Grandma’s Diner with Liz Engelman, and she was upset about something, but I was so happy. All I could think was, “Liz is upset about something? I’m not alone! Liz is my friend!” I remember the several in-jokes Liz and I developed and still laugh at twenty years later (Sheep!), and I remember our life-saving idea to head far away from Columbia down to Panchito’s in Greenwich Village once a week for margaritas—where we will meet again this fall to continue to celebrate. Maybe with a frozen peach margarita.

A discussion of the pros and cons of an MFA program.

I liked your comment about how much you made in those first few years. I myself quit an MFA program in dramaturgy, leaving Stony Brook University for New Orleans. I just kind of showed up and told people my interest in dramaturgy and worked on productions. Pretty successfully too! Although, the only show I ever made money on was STREETCAR, because I devised a pre-show historic walking tour and the tips were great!

While I feel like I could have been an excellent dramaturg, I felt pressured to spend time in a program learning skills for jobs. Instead of paying dues on the job, you were required to pay for an education, as if you couldn't possibly learn the trade on your own. You said, would you would be where you are without Columbia, but I feel like the atmosphere out there is that if you want a job in the vocation, you have to be educated, even over educated. A friend asked me, what would it take to be a professional dramaturg and I said, a PhD. I just didn't want it hard enough. But what I found in New Orleans (and managing an independent publishing venture) was a love for producing. So, that's my professional practice in London today, and having a background in dramaturgy really helps when you're representing live art and devised theatre companies.

Based on this and the other recent anti-grad school article, it sounds like Columbia might not be the right grad school, not that grad school might not be the right choice. I don't know anybody at Columbia, and maybe they have a reputation big enough that they don't care about word of mouth or the experiences of their students... but if it were me, I'd be noticing this kind of feedback--but then, I run an MFA program that realizes our success should be measured only by the success of our students. If one of our students ever says "Would I be where I am without (my school here)? Probably." I think I'd start wondering if it weren't time to get out of the teaching biz. We might have had some students who weren't a good fit, and we try really hard to keep that from happening, but none of our students--graduates or those who didn't complete the degree--would be so ambiguous about the time they spent there. We drink our share of margaritas, sure, but to celebrate what we're doing, not to escape from it. Of course, we are also a low-residency summer intensive so we try really hard to create an environment where nobody wastes any time wishing they were somewhere else doing something else. As an aside, Liz Engleman did a phone in session with a group of our dramaturgy students a few years ago and people still talk about what a great experience it was to meet her through that little speaker on the conference table. Hopefully we can get her here in person some summer, so we too can discover not only the joy of her intellect, but her company over adult beverages! :)

Hi Todd - First, I would say my experience there was indeed 20 years ago, and the program has changed and grown significantly under Christian Parker and his colleagues. And, as I hope is clear in this article, I was unprepared for grad school - that is my bad, not Columbia's. The Early Career Dramaturgs and my interns and mentees have heard more fulsomely my feelings about the MFA in dramaturgy and grad school in general. I am not anti-Columbia in particular (Go Lions!), I have questions about how grad schools present themselves to students and ask very many questions of starting artists as to why they are choosing to go to grad school instead of making their own paths.

And yes - anytime one can be around Liz Engelman is a wonderful day. As Catherine says above, my friendship with her has been worth all my student loans.

Days (and nights) at the Wolf. Never to be forgotten. Love to read you here.

At the end of the day, you met Liz Engelman. Isn’t that worth an MFA? xox