Saturday 15 May 2021
Essay by
Catherine
Castellani

I’m sitting on a metal folding chair in the auditorium of a public school on the Lower East Side, waiting for the show to begin. I’m taking pictures of the towers of painted egg cartons that make up the set, and zooming in on the dolls, decorations, flags, and other artwork displayed on the stage apron and along the walls. I am graciously agreeing with the lady sitting next to me that yes, I have put on a little weight. 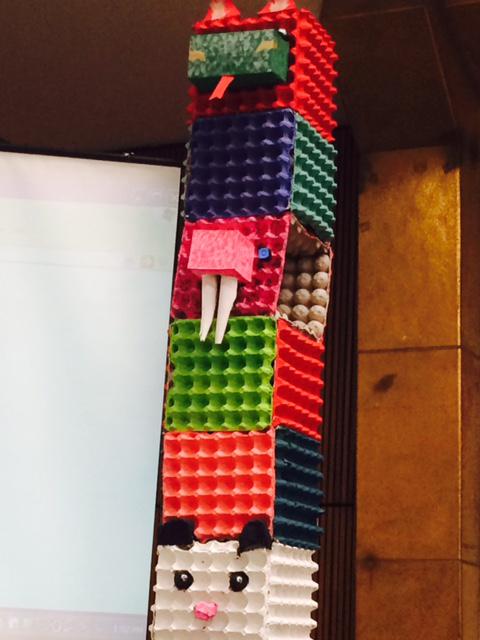 The principal enters to welcome us and we all sit up straight and make sure our phones are a) silenced and b) ready to record. We can’t wait to see our kids enter in the costumes they’ve made, hear the drumming and the songs they’ve learned, and watch the dances they’ve rehearsed.

“Don’t worry!” the principal calls out, arms wide in a reassuring gesture. “It’s not just art! It’s social studies and even math! They had to measure the stage area to fit the set they built. So it’s not just art; they’re not sitting around doing art.”

Now I am worried. I was completely unworried a few seconds ago, but my child’s principal has just dissed months of work by a couple hundred students, three talented teachers’ overtime contributions, and the entire multi-disciplinary field of art. I may be the odd woman out in this room, but that worries me.

This principal assumes I will be alarmed that my child takes a weekly visual art class, a dance class, and a music class. She is pretty sure I’m going to think there’s something fishy going on, that Real Learning is not happening...

While a direct, causal link between arts education and academic achievement has not been made (yet), there is a wealth of research that strongly suggests that arts education enhances children’s academic skills. I couldn’t find a single study claiming the reverse. But this principal assumes I will be alarmed that my child takes a weekly visual art class, a dance class, and a music class. She is pretty sure I’m going to think there’s something fishy going on, that Real Learning is not happening, because here are kids singing and dancing in costumes they made, on a set they built. What has that got to do with anything real?

I could reel off statistics about the strength and impact of the Broadway theatre alone, just one slice of the arts industry in New York City with a multimillion dollar contribution to the economy, but you already know that. The principal must know it, too. And yet the “not real” label sticks. Maybe because artists deal in fiction and illusion? Because we make something out of nothing?

Susan Ferziger, Playwrights Horizons’ Manager of Institutional Giving, got her poise and confidence from doing theatre in middle school. She says, “From the time I was in junior high, I was stage managing school productions or working backstage in some way. My first stage management experience was a production of No, No Nannette in eighth grade. At the end of the school year, I received the Drama award, which traditionally went to a student actor, so it was a huge honor and encouragement to me at the time (and I suppose it still is, since I still remember it!). As a stage manager, you’re required to not only get along with all types of people, but to be able to communicate and translate between them. As a fundraiser, I use these skills every day.”

Theatre director Maria Aladren teaches performance at the Middlesex County Technical & Vocational School in New Brunswick, New Jersey. It’s a public school dedicated to the arts, and her students are aiming at real careers. “These kids want to be makers, they want to be creating,” says Aladren. “It’s a young program, but of those students who do graduate, 100 percent have gotten into college. Of those, 90 percent are going to an arts-related program. 85 percent are pursuing a BFA. Of our high school graduating classes that have already now graduated from college, 79 percent or 80 percent are pursuing a career in the arts. Talk to me in five years, because that’s when you know. It’s easy to come out of college, young, and hit the industry, pursue this. But it’s very hard and you see down the road. But for now, they are pursuing this still.” And many of these students are the first one in their family to go to college.

But it’s an uphill battle to reassure parents that “just” art is worth pursuing. Says Aladren, “The question is: What good are you to society? What are you producing? …They [the parents] don’t understand anything about the field. Nothing. They see an actor, celebrities. That is the whole field to them. Sometimes I bring them in to see the work and I list: the director, the actors, the set designer, the lighting designer, the technicians, the stage manager, the crew, the people who are exploring technology, all of that. All the many, many creative people making this happen. I try to tell parents that this whole mythology, if you go into the arts you will starve, is wrong. The worst thing that will happen to you is you won’t be able to get work in the field you want, but you will never starve. They think, oh you should go learn some skills to be a secretary and you will always have a job. I explain that your job may be in more danger if you have only one specific set of skills. But an artist has trained to be creative, they’ve worked in adversity… You take that training and mindset and you can do anything.”

I feel lucky that my child’s school has a dedicated dance studio, a music room, a science lab, an art classroom, a gym, a library, and a stage. Even some more affluent schools don’t—they are so crowded that they’ve lost dedicated space for subjects that need it. We fight off an annual attempt by charter schools to take away one or more of our special rooms that “only” get used for arts and recreation. I don’t take it for granted. 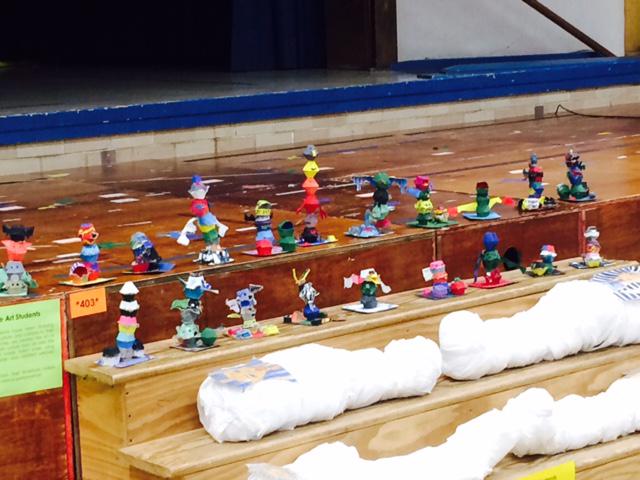 Then the kids storm the stage, dead serious, toting all kinds of percussion equipment, ready to rock. For the next ninety minutes, it’s just art.

I think I have a case of limerence for the lady who commented on your weight. :-DAs for the rest, I can't really even deal with it. "It's not just art?" I wish the arty scientists would give us real data to show the correlation between creation and mind/learning development.

The scientists have already begun the work. For starters, see the Dana Consortium: http://www.dana.org/Publica...

What worries me is that even artists, when trying to explain the value of art, talk in terms of economic impact. That isn't the real value of art. I like Martha Nussbaum's explanation: The real value of art is that it teaches us to imagine what it would be like in someone else's shoes. Empathy is the single essential skill to live in a democracy - we have to understand other people's positions in order for debate to be more than a shouting match; without that, our society becomes increasingly polarized. Something we see happening in the nation that we are busily making which devalues art - all those schools that give up their arts programs in favor of more STEM classes are busily creating citizens who value only themselves.

I agree. Maybe we all need to have a quick pitch ready on the value of art for art's sake, the same way we're ready to talk about our latest projects!

Lovely! I hope you share(d) this with your principal. As a side note, there ARE recent experimental studies with controls that link arts experiences with academic success.

Yes, many links! No absolute this = that proof yet (yet).