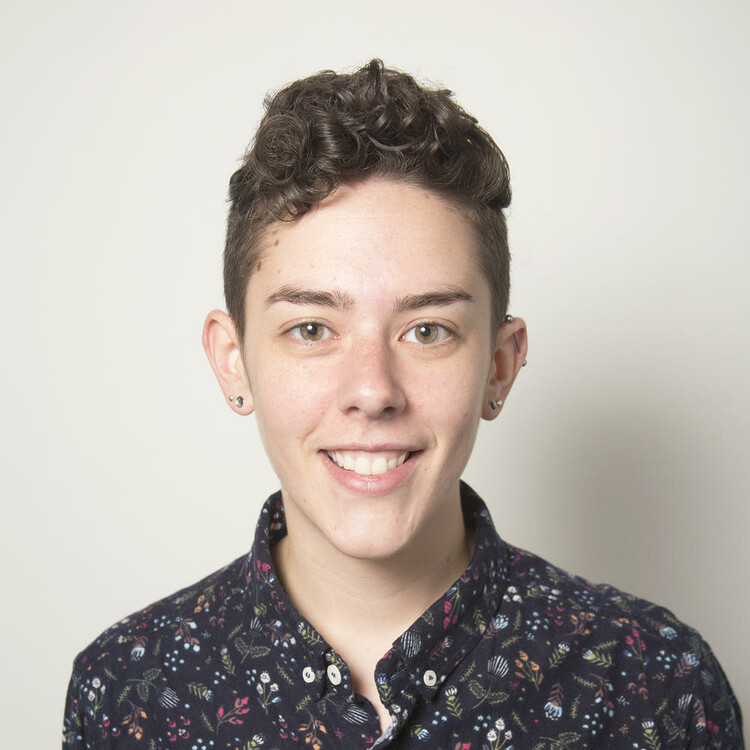 If sci-fi folk music seems like a combination you’d only come upon when pulling genres out of a hat during a songwriting workshop, then you don’t know filk. A mashup of folk sound and sci-fi themes, filk has amorphously existed at sci-fi and fantasy conventions for the better part of a century. Now, this niche genre is finding a foothold in musical theatre, with concert musicals like Rags Parkland Sings the Songs of the Future, which recently finished its run at Ars Nova; 1969: The Second Man, which had a two-week stint as part of New York Theatre Workshop’s Next Door series; and The Outer Space that ran at Joe’s Pub this past Spring.

Rags Parkland is essentially an underground protest concert—an exercise of resistance by an oppressed community of “constructed” bionic and cyborg beings, during a holocaust wherein biological humans are systematically deconstructing anyone not biologically born. The other two shows use a similar folk-concert frame as a basis for their storytelling: 1969: The Second Man explores the Apollo 11 mission and the life of Buzz Aldrin; The Outer Space tells the story of a stagnant couple who buy an old spaceship to explore the stars. Upon discovering these shows, I found myself wondering how something as specific and unique as using folk music to explore themes of sci-fi, space travel, and futuristic societies could have possibly become a theatrical trend. A quick Google search for “sci-fi folk” returned countless hits, but, looking a little closer, it became clear that much of filk’s history had been passed down through oral tradition. 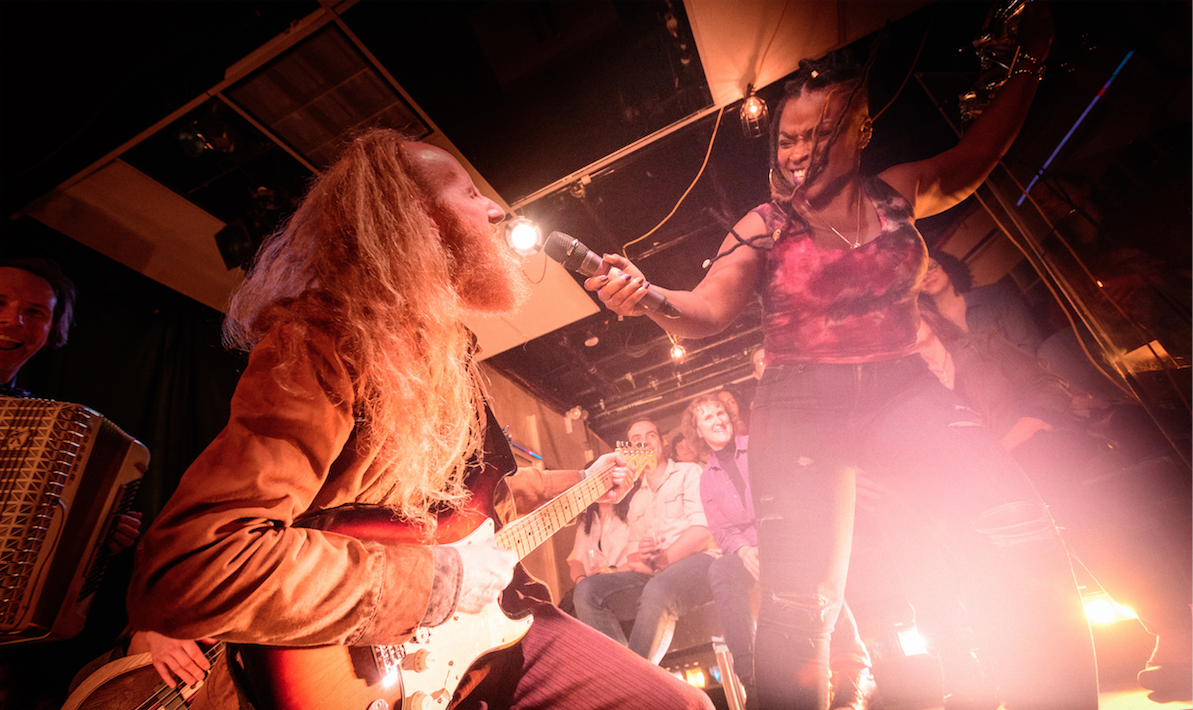 Primary sources were difficult to come by and ambassadors of the genre were tough to contact. Finally, after many of my emails bounced back, I got in touch with Merav Hoffman, a prominent member of the New York filk community and the vice president of Interfilk, an organization that seeks to connect filkers to new communities. “Filk isn’t one community, it’s hundreds,” Hoffman explains, citing this as the reason for a scarcity of entry points and centralized information. She explains that filk-specific conventions have existed globally for the past thirty years, and it’s become her mission to bring these disparate communities together. She had just returned from the largest convention—the Ohio Valley Filk Festival—but mentioned others in Seattle, California, Georgia, Ontario, Germany, and the United Kingdom. Day to day, filkers organize “house sings,” where they gather with their local communities to share songs they’ve written and to sing along to the filk musical cannon that has been established over time.

This cannon, hundreds of songs deep, includes pieces about Doctor Who, Harry Potter, time travel, space flight, and seemingly every other topic that might fall under the impossibly vast umbrellas of sci-fi and fantasy. At its simplest definition, filk music is the channeling of fandom through song. Sometimes these songs take the form of a Weird Al–esque parody, but just as often the tunes and concepts are completely original, lending themselves perfectly to a theatrical application. Theatre and filk have established a reciprocal symbiosis over the years.

At its simplest definition, filk music is the channeling of fandom through song.

Hoffman, who as luck would have it is a huge theatre fan herself, explains, “There are a lot of pieces of theatre right now that are being pulled into filk as inspiration. We’ve had musical theatre filk sings, and they’ve been jammed. People were in there singing Man of La Mancha, Camelot, Joseph… Pretty much anything you can think of. Hadestown frequently makes an appearance in filk circles. Sondheim is a big influence, too.” Filkers have long been using these songs as inspiration to write their own musicals. As an example, Hoffman cites H.M.S. Trek-a-Star, a Star Trek parody of Gilbert and Sullivan’s H.M.S. Pinafore which first premiered in 1967 at the sci-fi convention Westercon. Another example, circa 1987, is The Rocky Horror Muppet Show, which is exactly what it sounds like. Both of these filk musicals are frequently staged at conventions.

Today, Andrew R. Butler, the writer and star of Rags Parkland Sings the Songs of the Future, and Jacob Brandt, the writer and star of 1969: The Second Man, are bringing original filk musicals into the mainstream. Fascinatingly, neither playwright knew filk existed while they were writing these musicals. Butler discovered filk after making the same quick Google search I had, and was none too surprised to learn of the genre’s deep roots, pointing to the moments where sci-fi and folk have overlapped in the mainstream now and again. “I never imagined that nobody had done this before. Even just listening to old folk music, there are lots of great blippy instances of imagining a future inside of the shape of [folk],” Butler explained. “In [Rags Parkland], I talk about Bob Dylan’s Talkin’ World War III Blues, which is absolutely a work of science fiction. But I didn’t know about filk. Once I was already deep into writing this project, I started poking around, just trying to do some research and get my bearings and I discovered it. And I was like, ‘Oh, duh. Of course it exists!’”

For Butler, the seed that eventually grew into the character of Rags, a folk singer recounting the ill fate of a group of his bionic friends (known as “Constructeds” in the play) in the twenty-third century, was planted by “What’ll We Do With Ragland Park?,” a short story about political power–grabbing in a post-apocalyptic society, written by legendary sci-fi writer Philip K. Dick. “The [image] of this roots musician working in the future seemed so immediately rich in a way that the short story wasn’t interested in,” explains Butler. So, in true filk fashion, Butler imagined a new world for this character, tweaking his name but leaving the nod to Dick intact; giving him a backstory, a cause to fight for, and a reason to sing folk music.

The world of filk has always been varied and deep, but up to now it’s remained a largely underground community.

Rags Parkland asks the audience to imagine a future in which folk music is still a well-trod genre, eliminating some of the pitfalls that may come when trying to establish a brand new sci-fi universe from scratch. “The believability gap in theatre is really tricky. It would be so easy to try and build out a science fictiony thing and have it feel totally silly,” Butler explains. “Instead, we have a thing we can grab onto that has a shape we can understand. It comes with a whole kit of aesthetics that circumvent the need to portray futuristic technology. We don’t have to try to invent an aesthetic and get bogged down in ‘But would people dress like that? But would music sound like that? But would rooms be designed this way?’” Most importantly, all of this works on a character level, which is critical to ensuring it doesn’t feel like a cop-out. Folk music as protest song perfectly fits the bill as a vessel in which these characters operate. 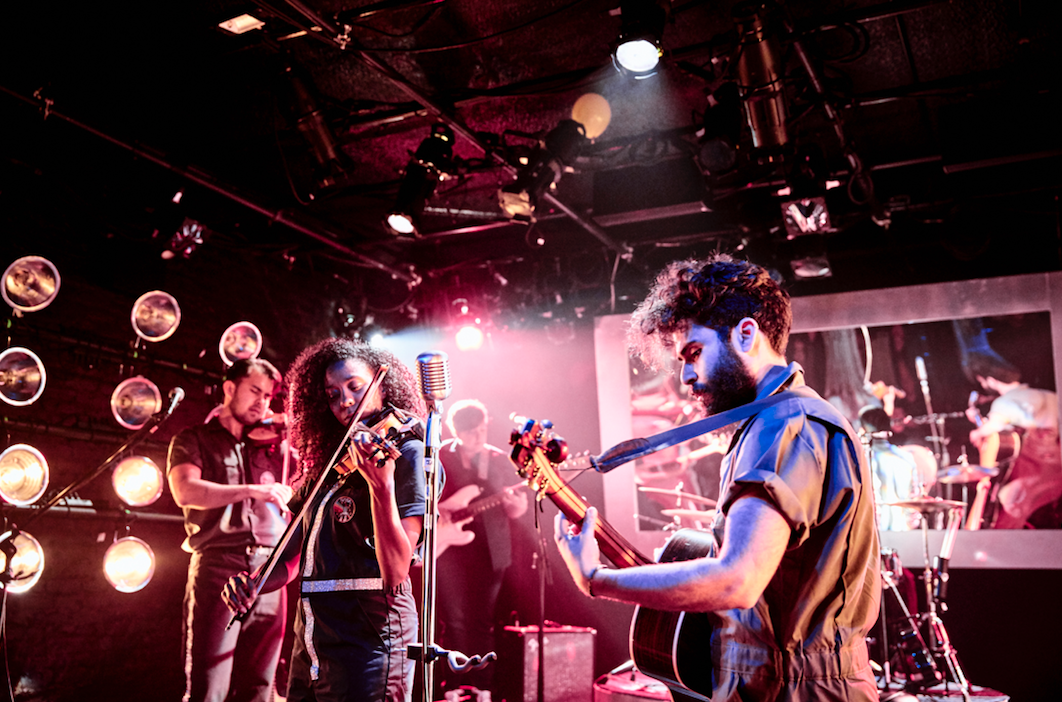 Hoffman, Butler, and Brandt all point to folk music as a perfect genre for storytelling. And, of course, sci-fi is a detail-rich genre that often builds an entirely new universe—plenty of story to tell there. But Butler takes it one step further, shifting the onus onto the audience to receive these details. “Folk music and science fiction are both forms that require a different type of listening,” he elaborates. “These worlds unfold, and you’re collecting clues. You’re not given a primer that tells you absolutely everything you need to know. Theatre often works in a really similar way.” Butler doesn’t want you to have all the information right away. He wants the information to reveal itself slowly, providing audiences with micro-epiphanies that satisfy and surprise, using the familiar and the unfamiliar in ways that make people put together the puzzle. This way, sci-fi, folk, and theatre come together in a perfect marriage.

The fact that there are suddenly several of these shows is thrilling to both Butler and Brandt. “It’s really exciting to see how many other people are also combining these ideas and seeing what happens,” Butler says, adding that this allows their shows to be in conversation that makes them all richer.

The world of filk has always been varied and deep, but up to now it’s remained a largely underground community. The landscape, however, is just right for filk theatre to peek its way into the mainstream, and Brandt has a bit of a dark theory as to why: “I think people are looking towards space not only in this escapist, sci-fi way right now, but people are really looking at it as a ripcord or an escape route. There’s this very real, kind of frightening, pervasive anxiety that people are feeling. We’re in a position where we’re looking at going to space as a real possibility, because we may have botched it [down] here.”

Butler’s approach is a bit more uplifting. In Rags Parkland, folk is used as a vehicle for community building. Audience and cast come together to rage against the fictional—yet all too real—machine of oppression and marginalization, and come out on the other side energized to stand up against the atrocities of present space and time. It’s downright filk-y, where community, collaboration, and self-expression are paramount.