Taking Hamilton to the Streets

This Café Onda series focuses on the new musical Hamilton by Lin-Manuel Miranda, which has generated rave reviews and unmatched buzz. The series explores Hamilton's Latinidad, adding a Latina/o spin to the discussion.

Lin-Manuel Miranda reading Alexander Hamilton. The cast of Fun Home rapping. A Spring Awakening reunion. The “Confrontation” from Les Mis. Lin-Manuel Miranda and Lea Salonga singing “A Whole New World.” Okieriete Onaodowan singing "Defying Gravity" as Mickey Mouse. Alex Lacamoire playing the melodica. You didn’t know you wanted it, but when you got it, you loved it.

I’ve been to many lotteries (won a few, lost a lot). It’s usually uneventful. A theatre employee collects names on paper slips, pulls them out of a bucket, calls out the winners, the winners do some sort of awkward celebration (guilty as charged), and that’s about it, folks.

Lin-Manuel Miranda’s Ham4Ham follows a long tradition of Latina/o (or the ancestors of present-day Latina/os) theatremaking that dates back to when the events in Hamilton were happening. 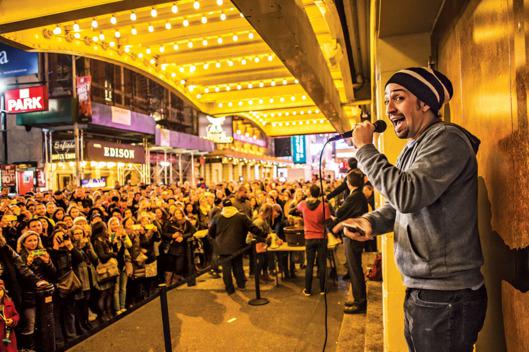 It’s become watercooler conversation that Miranda’s Hamilton is groundbreaking. President Barack Obama and Dick Cheney agree. Steven Sondheim and Andrew Lloyd Webber do, too. Yet, whereas what’s transpiring “in the room where it happens” is undeniably a landmark event, I believe what’s happening outside, on the street is most compelling in pioneering (we can hope) a new era of accessibility in commercial theatre. This is the New American Theatre.

During the lottery for the first preview performance of Hamilton, there were so many people that Miranda came out to thank and entertain the crowd. The tradition stuck and is now part of the aura that is Hamilton.

While the Ham4Ham show preceded the lottery (only $10, indeed a Hamilton for Hamilton) during every preview performance, Miranda has continued this work since the show’s opening, having a Ham4Ham show before the second show on two-show days in addition to special occasions. The five minute performances have become must-see events in and of themselves. Having hundreds of people spilling off of the sidewalk in front of the Richard Rodgers Theatre is not uncommon. The buzz in person and on social media is growing almost as fast as that for the musical itself. In fact, the lottery proved so popular that in early January Hamilton announced it would be implementing a digital lottery for the winter months due to safety concerns over the large crowds and street crowding on W 46th Street. When 50,000 entries crashed the online lottery system on the first day, the lottery returned to the Richard Rodgers while Miranda continued with a digital Ham4Ham show on YouTube that drops five minutes before the lottery winners are announced.

A quick browse on YouTube shows just how far the reach of Ham4Ham is. In fact, the August 15, 2015 Ham4Ham featuring Miranda and the late Kyle Jan-Baptiste performing “Confrontation” from Les Miserables has over 315,000 views and the October 24, 2015 show featuring the Schuyler Sisters—Jonathan Groff, Brian D’Arcy James, and Andrew Rannells—has over 275,000 hits (another version has over 252,000 hits). Somehow, Lin-Manuel Miranda has re-invented the pre-show lottery and created a product that has been seen—in person or online—by more people than Hamilton itself. Put simply, Hamilton is a game-changer in many ways, but, as Rae Votta claims, the show is “changing how fans interact with and consume the fandom around musical theatre.” Revolutionary, huh?

Lin-Manuel Miranda’s Ham4Ham follows a long tradition of Latina/o (or the ancestors of present-day Latina/os) theatremaking that dates back to when the events in Hamilton were happening. As Nicolás Kanellos describes, there is evidence that as early as the 1790s, while Alexander Hamilton was going toe-to-toe with Thomas Jefferson and Aaron Burr, professional Spanish-language theatre companies were performing in community settings in California. This continued throughout the nineteenth century as Spanish-language theatre companies frequently traveled throughout the country performing for the public and, later in the 1920s-1940s, Mexican-American duo La Bella Netty and Jesús Rodríguez traveled the Southwest performing short skits in public spaces. These are but a few examples. In fact “taking it to the streets” was a central principal of early Latina/o theatre movements in the United States, most notably El Teatro Campesino beginning in 1965 in the grape farms in California’s Central Valley to as recently as their October, 2015 collaboration with Center Theatre Group to present Popol Vuh: Heart of Heaven in downtown Los Angeles’s Grand Park.

The philosophy behind this is simple. If the people won’t come to the theatre, then take the theatre to the people. While El Teatro Campesino’s “taking it to the streets” originated from a place of social protest, Ham4Ham does so to create accessibility, tap into social media, and ultimately generate a free, self-functioning marketing campaign. In this way, Ham4Ham falls into a lineage of accessibility as a Latina/o theatremaking aesthetic—what I call an “aesthetics of accessibility”—that finds its roots in El Teatro Campesino. Others see Hamilton’s taking it to the streets as a tribute to the collaborative roots of hip-hop.

This aesthetics of accessibility cannot be overlooked in this age of hyper-commercialization on Broadway. In taking Hamilton “to the streets,” Miranda debunks the inaccessibility of Broadway. It is no secret that Broadway ticket prices have grown astronomically in recent years. Even Hamilton’s lowest ticket price is $139 before fees and taxes for the most-recent block of tickets (with prices rising well over $500 for prime seats). Naturally, these price points create a barrier that only allows certain people access, and leads many to disregard Broadway as a viable entertainment form.

Here you have the most commercial theatre in the world offering free shows featuring Broadway talent—oftentimes Hamilton cast members and a virtual who’s who of Broadway—on the sidewalk on a bi-weekly basis, breaking down the barrier between performer and spectator by placing everyone tightly underneath the Richard Rodgers marquee. In this way, the spectators become active participants and are arguably as important as the show itself; having a critical mass maintains Ham4Ham and Hamilton as must-see events. All of the things that are frowned upon inside the theatre are encouraged outside: hooting and hollering, photography, taking video, social media, and interacting with the performers—not to mention unwrapping your throat lozenges as loudly as you want.

Ham4Ham just goes to show that sometimes the revolution isn’t just on stage or even in the theatre. It’s on the streets.

Those who have great talent create great theater. Those who lack talent get worthless degrees in "Gender and Sexuality Studies" and master the language of racialism and tribalism. These sad men posture as critics, hoping that the very act of criticism will confer upon them some authority, some modicum of importance. But it doesn't. It just make them look smaller by comparison to the talented ones.

Thank you, Trevor, for as Dr.Teresa Marrero put it, "positioning" this within a broader context of [email protected] theater history. I was reminded of smaller but equally significant events. When Raul Julia played Dracula on Broadway at the Martin Beck Theater, he always made time for school children between shows on matinee days. The theater would be packed with busloads of students, and there was Raul, sitting at the edge of the stage, turning the Beck into a living room. He would have meaningful conversations with students, sharing from his life, always encouraging them to remember where they came from and to honor their histories. He modeled great pride in being Borikua, and also modeled a healthy and honest humility as well as cross-class and ethnic unity. To Raul, the usher was as important as the director, and those of us who sold drinks at intermission and checked coats were treated with equal esteem and welcome when he hosted a party. Those were analog days - but I assure you, those moments have been recorded in the hearts of everyone who knew him.

Thank you for sharing about Raul Julia. These are exactly the type of stories we need to capture and write about!

10 minutes of ham4ham hardly makes up for those ticket prices. a dvd would go a long way to making the whole thing accessible.

in case links are ok.https://www.youtube.com/wat...

no offense but there's a better, longer schuyler georges video by thebuffyx. where you can see everybody properly.

I like this positioning of Hamilton within a longer tradition of Hispanic- Latina-o theater and performance in the US, Trevor. Very smart use of the historical work by Kanellos. I think it is important, not only as a cultural event that is turning out to be a game-changer for the New American theater, but also to keep the piece from the media hype of appropriation.

Thanks, Teresa! After I wrote this, I actually started working on an article-length version that really looks at the historical continuum of [email protected] street performance. I'm looking at a lot of El Teatro Campesino's work and the commons/open-access of the Latina/o Theatre Commons in conversation with Lin-Manuel Miranda's work via Ham4Ham and Twitter. I will also analyze a few of the actual Ham4Ham performances (the "On Your Feet" one). It's been fun to write!

The West Side Story Appropriation We Never Really Talk About

Viviana Vargas compares West Side Story and La Carreta by looking at the history of Puerto Ricans migrating to New York to better understand an example of cultural appropriation in the arts, its effects, its telltale signs, and some lessons for the future.

The Power of Jo of Arc
W.M.
Akers
Essay

The Power of Jo of Arc

The grace and fury in the performance of Jo Lampert as Joan in Joan of Arc: Into the Fire.