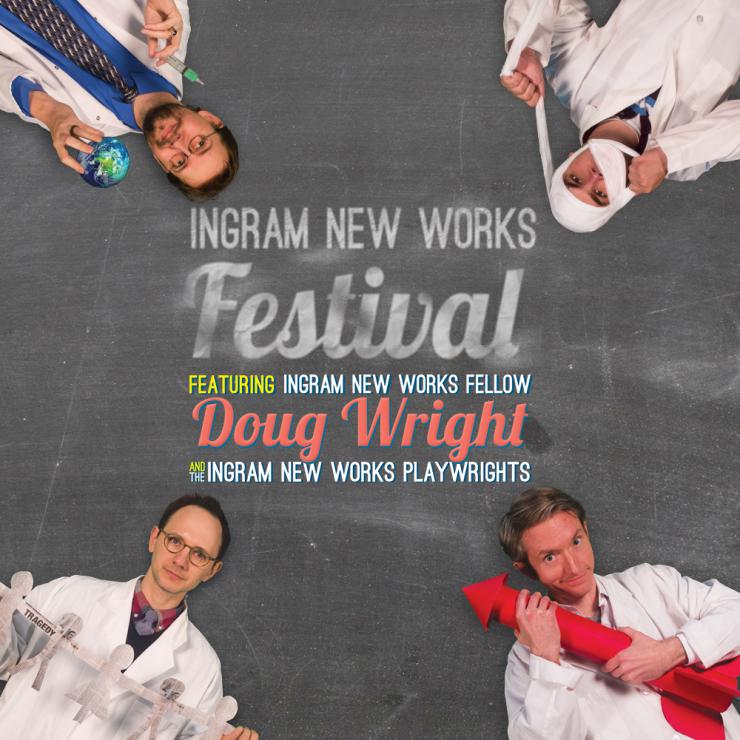 Live from Nashville, the Tennessee Repertory Theatre presented the Ingram New Works Festival livestreamed on the global, commons-based peer-produced HowlRound TV network at howlround.tv on Sunday 11 May through Wednesday 14 May 2014.

The Ingram New Works Project was created by Tennessee Rep co-founder Martha R. Ingram to provide an opportunity for emerging playwrights to develop new theater works with the artistic support of Tennessee Rep and under the tutelage of a Playwriting Fellow of national standing. Past Fellows include David Auburn, John Patrick Shanley, Steven Dietz, and Theresa Rebeck.

Sunday 11 May:
Pathogenesis by Jeremy Sony.
A global pandemic, a dangerous cure, and a father / daughter relationship set to explode at the end of the world.
5 p.m. PDT / 7 p.m. CDT / 8 p.m. EDT
Participate in a talkback with the author immediately following the performance on Twitter. Direct your questions to @tnrep and use #howlround.

Monday 12 May:
Cut It Out by Andrew Kramer.
Rebecca Helmer is a wife and mother becoming increasingly unsettled by her seemingly perfect life. Suffocated by the comfort of this illusion, she embarks on a journey of remaking herself. Quite literally. With plastic surgery.
5 p.m. PDT / 7 p.m. CDT / 8 p.m. EDT
Participate in a talkback with the author immediately following the performance on twitter. Direct your questions to @tnrep and use #howlround.

Tuesday 13 May:
Together We Are Making A Poem In Honor Of Life by Dean Poynor.
When the unthinkable happens, a mother and father grapple with what it means to be a parent in the wake of the tragedy that took their child. A powerful and poetic exploration of what it means to live through unimaginable loss.
5 p.m. PDT / 7 p.m. CDT / 8 p.m. EDT
Participate in a talkback with the author immediately following the performance on twitter.  Direct your questions to @tnrep and use #howlround.

Wednesday 14 May:
Good Monsters by Nate Eppler.
Frank is a police officer who moonlights as a security guard to make ends meet. She was a shoplifter. She was running. It was dark. He thought she had a gun. She didn't. And now Frank's the guy who shot an unarmed teenager. While he waits for the trial, the ghost of the dead girl haunts him every night. He tries to get rid of the her, but she refuses to leave the backyard. When she begins to make terrifying demands of him, the fireworks really begin.
5 p.m. PDT / 7 p.m. CDT / 8 p.m. EDT
Participate in a talkback with the author immediately following the performance on twitter. Direct your questions to @tnrep and use #howlround.

Jeremy Sony is a Midwest-based playwright, screenwriter, and recipient of the 2012 Scott McPherson Playwriting Award. His independent feature Separation Anxiety (Best Drama, 2012 Riverbend Film Festival) was produced by Glass City Films, starring Emmy-winner John Wesley Shipp and Drama Desk nominee Polly Adams. Mr. Sony is co-founder of Theatre Daedalus where he has produced numerous short play festivals including the Project 10 series, Caught in the Act!, Caught in the Act…Again!, and Triple Play. His play Frackture has received staged readings through the TAGS New Play Project and Ohio University Seabury Quinn, Jr. Playwrights Festival, and was developed thanks in part to support from the 2012-2013 Anthony Trisolini Graduate Fellowship. His other plays include Advice to the Happy Couple (MadLab Theatre), The Cosmonaut in Human Resources (Luna Theatre), Spin Cycle (2010 Heideman Award Finalist, Actors Theatre of Louisville) Mr. Sony holds an MFA in playwriting from Ohio University and a B.A. in film and television from the University of Notre Dame. Mr. Sony is founder of submissioncalendar.com and is an associate member of the Dramatists Guild. www.jeremysony.com.

Andrew Kramer is a current member of the Emerging Writer's Group at The Public Theater (NYC), where he is developing his play, Armature, which will be produced as part of Cleveland Public Theatre’s 2014 Big Box New Play Series. He is also currently involved in Horse & Cart Theatre’s playwriting competition, The PlayOffs in Denver. He is a 2010 graduate of Ball State University's Department of Theatre & Dance in Muncie, Indiana. Originally from Cleveland, Ohio, he moved to NYC when he was accepted into the Groundbreakers Playwrights' Group with the terraNOVA Theatre Collective. He was a 2012 member of the Ingram New Works Lab, where he developed his play, Crying for Lions, which has gone on to have readings/development in Nashville, Cleveland, NYC, and Williamsburg, VA. He was a Core Apprentice Writer at the Playwrights' Center in Minneapolis as well as a two-time semi-finalist in the Samuel French Off-Off Broadway Play Festival in both 2010 and 2011. Also in 2011, Andrew served as Playwright-in-Residence at the Cairns Arts Festival in Queensland, Australia, where Whales & Souls saw its world premiere. Most recently, he was a finalist for the 2050 Playwriting Fellowship at New York Theatre Workshop, as well as on the shortlist for the Old Vic, New Voices US/UK writer’s exchange.

Nate Eppler is a playwright and teaching artist based in the southeastern United States. Mr. Eppler's plays are fierce and funny field trips into our most fundamental anxieties. Full of surreal imagery and constantly surprising invention, Mr. Eppler's plays are roller coaster rides that delight and frighten in equal measure. His plays include Long Way Down (2011 Steinberg/ATCA New Play Award semi-finalist), Larries, Sextape (& Other Stories), and Keeping Up With the Joneses. Mr. Eppler is a passionate supporter of locally grown theatre in his adopted hometown and is proud a recipient of both the Tennessee Arts Commission Professional Development Support Grant and the Individual Artist Fellowship. Mr. Eppler is one of the curators of The Ten Minute Playhouse, a quarterly festival of new plays by Tennessee Playwrights, and is co-founder of Playhouse Nashville, an organization devoted to producing new works for the stage and elevating the voices of playwrights in the south. Mr. Eppler currently serves as the first Playwright-in-Residence for Tennessee Repertory Theatre and is a proud member of the Dramatists Guild of America. www.nateeppler.com.