Kyle Hatley's Master of the Universe at The Living Room Theatre

Produced With
The Living Room 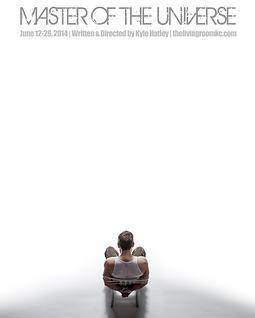 The Living Room Theatre in Kansas City, Missouri presented a performance of Master of the Universe written and directed by Kyle Hatley livestreamed on the global, commons-based peer-produced HowlRound TV network at howlround.tv on Sunday 29 June at 6 p.m. PDT/ 8 p.m. CDT/ 9 p.m. EDT. Use Twitter hashtag #howlround to share.

Master of the Universe is the story of a discharged soldier with a mysterious disability, trying to win the love of his childhood sweetheart. A science fiction retelling of Büchner's Woyzeck, infused with the spirit and music of Nina Simone, Master of the Universe leads us through the epic labyrinth of a destructive mind whose only salvation is love or death or both.

"Tirelessly, you fight for Life. Love. Marie. Hell, I'd fight for it too, I really would, but Life, I'm sorry to say, Victor, is nothing more than an accident, albeit a beautiful one..."- Ani, played by Vanessa Severo

The Living Room Theatre
The Living Room is an unconventional art space in the Crossroads Arts District in Kansas City, Missouri. Dedicated to creating an atmosphere that allows the audience to abandon their perception of "The Theatre," the two-stories of The Living Room is constantly being transformed, creating new and engaging performance spaces, to present thought-provoking works by local and published playwrights.

The ​Living Room was founded in 2010 by Rusty Sneary and Shawnna Journagan.

Originally an auto showroom, the three story building was transformed into a performance space by Sneary and Journagan with the blood, sweat, passion, and dedication of their friends and family in the KC community.

Aside from the unconventional playing space (which changes from show-to-show), what makes The Living Room unique is that the audience lounges in vintage chairs and couches while enjoying progressive and provocative performances.

The space has been used not only for The Living Room's past three—almost four—seasons, but has also housed KC Fringe Shows, staged readings, concerts, private parties, and even weddings.

Writer and Director Kyle Hatley
Kyle Hatley is an actor, director, playwright, producer, and the Associate Artistic Director of Kansas City Repertory Theatre in Kansas City, Missouri under Artistic Director, Eric Rosen. At the Rep, Kyle directed The Borderland, Broke-ology, Circle Mirror Transformation, A Christmas Carol (2010, 2011 and upcoming: 2012), Little Shop of Horrors and was the Associate Director on August: Osage County. Other Kansas City directing credits include Carousel (The Living Room) in which he also played “The Starkeeper,” Ben Franklin’s Apprentice (Coterie), Hamlet (Two Thirds Theatre) and The Darwin Project for Friends of Chamber Music at Helzberg Hall in the new Kaufman Center for the Performing Arts. For the Kansas City Fringe Festival Kyle wrote and directed Head, The Death of Cupid, Watering The Grave and Six. As an actor, Kyle was last seen as “Caleb” in The Whipping Man at directed by Eric Rosen, and before that he was “The Gentleman Caller” in The Glass Menagerie directed by David Cromer, both at Kansas City Repertory Theatre. Last season Kyle debuted his original musical, The Death of Cupid, right here at The Living Room. He is also the artistic director and co-founder of Chatterbox Audio Theater, a non-profit, web-based theatre company that produces fully soundscaped audio plays for free streaming or download, where he has written and directed The Dead Girl, which won the Silver Ogle Award for excellence in Horror & Fantasy for Audio Theatre in 2008; Six, produced both in Memphis and in Kansas City; Surfacing, a thriller series in partnership with the UMKC Department of Theatre; an adult adaptation of Pinocchio, starring Mark Robbins; and most recently he created and directed a new series called The Human Experience, which is a form of confessional theatre that features anonymously submitted pieces defining words that belong to all of us but mean something different to each of us. In 2009 he was named Best Director in Kansas City by The Pitch, a 2011 Man of the Year nominee for KC Connect and is a proud Charlotte Street Foundation Generative Artist Fellow. Kyle received his degrees in Theatre from Rhodes College.

Missouri
New Play Development
U.S. by State
Most Discussed
Designing Collaboration: In Search of a Taxonomy of Collaborative Methods
Emily McConnell
Most Watched
The Gathering from the CrossCurrents Festival
Wednesday 4 May to Saturday 7 May 2022
Upcoming
Livestreaming a Conversation: Suzan-Lori Parks' Watch Me Work
Monday 30 May 2022