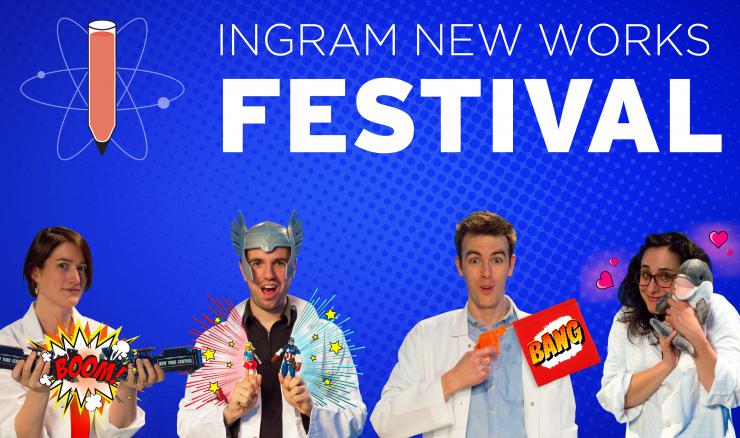 The Ingram New Works Festival is a celebration of new work born and fostered in Nashville Rep’s Ingram New Works Project under the care and guidance of Nashville Rep’s Producing Artistic Director René D. Copeland, Playwright-in-Residence Nate Eppler, and our 2015-16 Ingram New Works Fellow, Pulitzer Prize nominee Rebecca Gilman. The Festival presents staged readings of our lab playwrights’ new works performed by outstanding Nashville actors. Each reading will be followed by a talkback, bringing the audience into the conversations with the playwright, director, and cast.

Join the conversation! Tweet your questions/comments to @nashrep using #howlround to participate in the talkback immediately following each reading.

The Secretary by Kyle John Schmidt

Ruby runs a small-town gun company that aims to protect women by helping them protect themselves. But as production begins on the company’s newest model, guns start going off—and no one’s pulling the trigger. This exciting new play is a quirky, offbeat comedy for a world that’s up in arms.

We See What Happens by Jonathan Alexandratos

Jonathan wrote a beautiful solo play about his grandmother’s immigration to the United States. But you won’t be seeing that play. Instead, Jonathan's grandmother is here to tell you how it really happened. Armed with the action figures Jonathan left behind in Granny’s basement and enough spanakopita to go around, Granny is going to set the record straight.

This is About You by Edith Freni

YOU works with dolphins at a run-down facility in Key Largo, Florida. She's just moved into her best friend's apartment. He thinks of her as a roommate, but she wants more. And she's willing to do just about anything to get it. This electric new play explores the depths of denial and what happens when you finally realize that the thing you so desperately want is not the thing that you need.

A staged train wreck as the spectacular conclusion of a State Fair serves as the backdrop of this bold new play. A Victorian couple seeks increasing thrills to regain their bohemian marriage, but their reckless actions soon put an entire town at risk. Thrill Day is a collision of steel, sex, race, gender, class, and the pursuit of explosive pleasures.

Kyle John Schmidt is a writer from Montezuma, Iowa. His plays have been produced by Actors Theatre of Louisville (Take 10 Apprentice Showcase and the Humana Festival), Crashbox Theatre, the Kid Magicians, Play-in-a-Bar, the Samuel French OOB Short Play Festival, Theatre Southwest, Pittsburgh New Works Festival, University of Texas New Theatre, the David Mark Cohen New Works Festival, and read at the Stage West New Play Festival. He has been a finalist for the Humana Festival, PlayPenn, the Lark’s Playwrights’ Week, and the Princess Grace Award. Furthermore, Kyle is a winner of the Heideman Award and a recipient of the Theatre Masters Award. He received his MFA from the Michener Center for Writers.

Jonathan Alexandratos is a New York City-based playwright. His work has been presented at the NY Fringe Festival (2012), the Last Frontier Theatre Conference (2013), the Pop Culture Association Conference (2013), and other venues. He has received commissions from the Abingdon Theatre Company and Truant Arts. An avid comic book and action figure fan, Jonathan is always looking for ways to combine comics and pop culture with the stage. His most recent play, Duck, uses comic book tropes to craft an animal allegory about the nature of abuse. This play was completed at Mission to (dit)Mars, a playwrights’ lab in which Jonathan is a member. Jonathan holds an MFA in Playwriting from Queens College, and is a member of the Dramatists Guild. Beyond the stage, Jonathan co-programs Page 23, an academic literary conference centered on comics and pop culture that operates under Denver Comic Con. He is currently editing a collection of scholarly essays on action figures, which will be out late next year. Jonathan hides out at Queensborough Community College, where he teaches English. He also speaks Klingon.

Edith Freni holds both her BFA and MFA from NYU’s Department of Dramatic Writing. Her work has been produced, read, and developed by theatres around the country. Edith is a two-time nominee for the prestigious PONY award, has been a finalist for the Jerome Fellowship and the Heideman award, and was a semi-finalist for the 2015 P73 Playwriting Fellowship. Her work has been nominated for L. Arnold Weissberger Award, the Humanitas Prize, and the Francesca Primus Award. She was a Kilroy’s List Honorable mention in 2014 (Total Power Exchange) and 2015 (The Stroke). Edith was a long-time member of Youngblood and is also a member of Obie-winning Partial Comfort Productions. Her work is published by Playscripts, DPS, Smith & Krauss, and Applause. She currently lives in Atlanta, Georgia where she is the inaugural Emory University Playwriting Fellow.

Helen Banner is an associate artist with New Georges and a member of The Jam and the Inaugural Writer/Director Lab at Everyday Inferno Theatre Company. Her work has been developed at New Georges, the Wild Project, Dixon Place, the Edinburgh Fringe Festival, The Lark, the Great Plains Theatre Conference, and the Last Frontier Theatre Conference. Helen has been a Finalist for a 2015 InterACT 20/20 Commission and a Semi-finalist for the Gulfshore Playhouse New Works Festival 2014 and the Bay Area Playwrights Festival 2014. Her play Soldier Love was a Semi-finalist for the Stanley Drama Award 2015 and a Finalist for the Newman/Woodward Prize 2015.