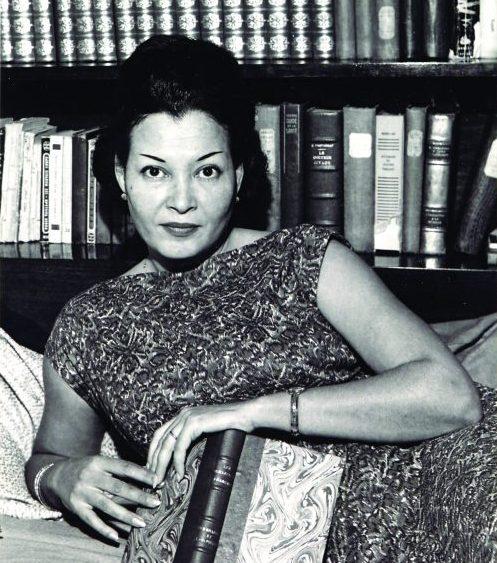 Join us for a celebration of the 100th birthday of Haitian playwright and novelist Marie Chauvet.

Marie Chauvet was forced to flee Haiti after publishing works critical of the race and class structures undergirding Haitian society and politics during the totalitarian regime of François “Papa Doc” Duvalier. Her most well-known work, the trilogy Love, Anger, and Madness, was first published in Paris in 1968 with the support of Simone de Beauvoir, bringing her much acclaim and putting her life in great danger. Exiled from Haiti, leaving her affluent family behind, Chauvet spent the final years of her life in New York City, where she worked as a maid and died in relative poverty in 1973. It is only in the last two decades that Chauvet’s work has been given critical attention, enjoying re-editions in French and translations in English and Spanish. Though best known as a novelist, Chauvet was also a playwright, and much of her prose fiction is written as dramatic dialogue.

The event is co-presented and made possible by the Henri Peyre French Institute, Program Director Francesca Sautman, with additional support from IRADAC (Institute for Research on the African Diaspora in the Americas and the Caribbean), GC CUNY. Alessandra Benedicty-Kokken is Assistant Professor of Caribbean and Postcolonial Literatures and Director of the MA in the Study of the Americas at the City College of New York (CUNY). She is author of Spirit Possession in French, Haitian, and Vodou Thought: An Intellectual History (Lexington Books, 2015). She is co-editor of both Revisiting Marie Vieux Chauvet: Paradoxes of the Postcolonial Feminine (2016), a special issue of Yale French Studies and The Haiti Exception: Anthropology and the Predicament of Narrative (Liverpool University Press, 2016). She is Series Editor of the Brill Caribbean Series. Her current research looks at how the culture industry affects identity politics in major urban centers.

Kaiama L. Glover is Associate Professor of French and Africana Studies at Barnard College, Columbia University. She is author of Haiti Unbound: A Spiralist Challenge to the Postcolonial Canon (Liverpool 2010); co-editor of Marie Vieux Chauvet: Paradoxes of the Postcolonial Feminine (Yale French Studies 2016); and translator of Frankétienne’s Ready to Burst (Archipelago Books 2014), Marie Chauvet’s Dance on the Volcano (Archipelago 2016), and René Depestre’s Hadriana in All My Dreams (Akashic Books 2017). She has won awards from the PEN/Heim Foundation, the National Endowment for the Arts, the National Endowment for the Humanities, the Mellon Foundation, and the Fulbright Foundation. She is founding Editor of sx archipelagos: a small axe journal of digital practice[smallaxe.net] and Director of the forthcoming digital humanities project In the Same Boats: Toward an Afro-Atlantic Intellectual Cartography. She is currently completing a monograph concerning individualism and representations of womanhood in Caribbean prose fiction. Stéphanie Bérard is a Marie Curie European fellow in the Department of Theatre Studies at the University Sorbonne Nouvelle in Paris. Her research deals with Caribbean literature and culture (Martinique, Guadeloupe, Haiti) and is situated at the crossroads of Postcolonial and Theatre Studies. She is the author of Théâtres des Antilles: traditions et scènes contemporaines (Paris, L’Harmattan, 2009) translated and published in English by Caribbean Studies Press (Florida, 2014), and the co-editor of Emergences Caraïbes: une création théâtrale archipélique (Paris: L’Harmattan, 2010). She has published extensively on the history of Caribbean theatre, Creole and French, oral tradition, and rituals (gwoka drum music and dance, carnival, and voodoo). Her research also deals with contemporary African drama and her book Le Théâtre-Monde de José Pliya was recently published in Paris (Editions Honoré Champion, 2015). She is currently working on a new monograph on Haitian Theatre funded by an NEH fellowship. Régine Isabelle Joseph specializes in francophone literature, postcolonial studies, feminism, and the political histories of the French Caribbean. She is presently working on a book manuscript that focuses on the literary responses to the rising suppression of radical politics in mid-20th-century Haiti. Her second book project–derived from her archival research on the correspondence between Marie Vieux Chauvet and Simone de Beauvoir (Yale French Studies, 128)–examines the politics of the literary market and the publication of French and Francophone women writers. Dr. Joseph holds an AB in Romance Languages and Literatures from Harvard University, and a PhD in French Literature from New York University. Christian Flaugh works in francophone Caribbean and Sub-Saharan African studies in the Department of Romance Languages and Literatures at SUNY-University at Buffalo. He concentrates on subjectivity and bodily materiality (disability, gender, race) as well as theatre and performance. Flaugh co-founded Le Théâtre de la Chandelle Verte with whom he performed for several seasons. He currently co-coordinates the interdisciplinary Performance Research Workshop through UB’s Humanities Institute. Flaugh has articles published in journals like Theatre Topics, Francosphères, L’Esprit Créateur, and recently in Journal of Haitian Studies on contemporary playwright, Guy Régis. He also edited a special issue on Aimé Césaire in Formes poétiques contemporaines, and co-organized another with Tammy Berberi for Journal of Literary and Cultural Disability Studies. After his first book, Operation Freak: Narrative, Identity, and the Spectrum of Bodily Abilities (2012), his current research teases out a theory and praxis of revolting performance in francophone festivals, sketch comedy, and theatre. Régine Michelle Jean-Charles is an Associate Professor of Romance Languages and Literatures and African and African Diaspora Studies at Boston College. Her first book Conflict Bodies: The Politics of Rape Representation in the Francophone Imaginary was published by Ohio State University Press in 2014. She is the author of numerous articles that have appeared in peer-reviewed journals such as The Journal of Haitian Studies, American Quarterly, Callaloo, French Forum, Journal of Romance Studies, Research in African Literatures, and Small Axe. She has received fellowships from the Ford, Mellon Mays, and the Woodrow Wilson Foundations. She is also a board member, lecturer, and performer for A Long Walk Home, Inc., a non-profit organization that uses art to educate, inspire, and mobilize young people to end violence against girls and women. Her current book project approaches Haitian diasporic cultural production by bringing together performance studies, gender studies, and visual culture. Jeremy Matthew Glick is an Associate Professor of African Diaspora literature and modern drama. He is the author of The Black Radical Tragic: Performance, Aesthetics and The Unfinished Haitian Revolution (2016, NYU Press). He is currently working on long-form essays on Frantz Fanon, Sam Greenlee’s Black Power Detective Fiction, and Century-Methodological Approaches to African American Literature. His second book project is entitled Coriolanus Against Liberalism/ Coriolanus & Pan Africanist Loss. He is the Hunter College Chapter Chair of the PSC-CUNY Union and lifetime activist. Judith Miller is Collegiate Professor of French and Francophone theatre at New York University. She is a former Chair of the Department of French and was one of the inaugural Deans of Arts and Humanities at New York University Abu Dhabi. She has published numerous books and articles in her field, including a study of director Ariane Mnouchkine (Routledge, 2007) and the forthcoming anthology of plays by Ivoirian author Koffi Kwahulé (Seven Kwahulé Plays by Koffi: In and Out of Africa, Michigan, 2017). At the University of Wisconsin, where she taught for some twenty years, she directed yearly plays in French with her students. She has also translated some 20 plays from the French, including works by Hélène Cixous, Olivier Kemeid, Ina Césaire, José Pliya, and Werewere Liking. In 2018, the Feminist Press will bring out her translation of Guadeloupian Gerty Dambury’s novel Les Rétifs. Alice Reagan. Directing credits include Or, by Liz Duffy Adams at Shakespeare & Company, Phaeton (a diggle of a fragment) by Mac Wellman at Classic Stage Company, Enter THE NIGHT by Maria Irene Fornes with Portland Experimental Theatre Ensemble, The Miser by Molière with Brave New World Rep, Nomads by Julia Jarcho at Incubator Arts Project, I Came to Look for You on Tuesday by Chiori Miyagawa at La MaMa. Upcoming: Elliot, A Soldier’s Fugue by Quiara Alegría Hudes at Profile Theatre in Portland, OR. Alice is Assistant Professor of Professional Practice in Directing at Barnard College.  MFA: Columbia. alicereagan.com Lena Taub Robles is Assistant Professor in the Department of Modern Languages and Literatures at California State University–Bakersfield where she teaches French and Spanish. She has translated numerous articles from French and Spanish into English. She specializes in Francophone and Hispanic Caribbean literature, cultures, and history. Carolyn Shread is Lecturer of French at Mount Holyoke College and has also taught translation studies at Smith College since 2013. Both a scholar and translator, most of her published articles address two principle areas of research: the implications of French philosopher Catherine Malabou’s concept of plasticity for translation studies and the process of translating Marie Vieux-Chauvet’s Les Rapaces into English. Dr. Shread is assistant editor for Translation: A Transdisciplinary Journal. She is also managing editor of the Voix féminines series of the LEGS ÉDITION publishing house and is on the editorial board of the Haiti based journal Legs et Littérature whose upcoming issue is dedicated to celebrating the centenary of Marie Vieux-Chauvet’s birth.

Gina Athena Ulysse is a feminist artist-academic-activist and self-described Post-Zora Interventionist. She is the author of Downtown Ladies: Informal Commercial Importers, A Haitian Anthropologist and Self-Making in Jamaica (University of Chicago Press, 2008), Why Haiti Needs New Narratives: A Post-Quake Chronicle (Wesleyan University Press, 2015), and Because When God is too Busy: Haiti, me & THE WORLD, a collection of poetry, performance texts and photographs (Wesleyan University Press, 2016). She is the editor of “Pawol Fanm Sou Douz Janvye,” in Meridians: Feminism, Race, Transnationalism (2011), and “Caribbean Rasanblaj,” (2015), a double issue of e-misférica. Her other works include: I Am Storm: Songs & Poems for Haiti, VooDooDoll What if Haiti Were A Woman: On Ti Travay Sou 21 Pwen Or An Alter(ed)native in Something Other Than Fiction and Contemplating Absences & Distances. Her writing has appeared in numerous journals and anthologies. A committed public intellectual, she is also a blogger. Her website: ginaathenaulysse.com