Julie Marie Myatt is the Playwright-in-Residence at South Coast Repertory  through the National Playwright Residency Program, funded by the Andrew W. Mellon Foundation. Find out more about her residency experience here and learn about the impact of the program at large here.

About the Pacific Playwrights Festival: 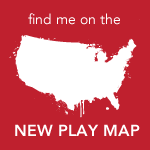 Launched in 1998, South Coast Repertory’s annual Pacific Playwrights Festival (PPF) has become a major national showcase for new plays. The 16th Festival in April 2013 will bring the total number of plays presented in PPF to 105, representing the work of 83 playwrights. Each year’s three-day festival attracts theater professionals from across the natio, who are drawn by the chance to be the first to see some of the best new plays in the country. These artistic leaders, along with SCR’s devoted new play audiences, take advantage of the opportunity to engage with seven new plays that traverse the theatrical spectrum. And along the way PPF becomes a convivial gathering place for the sharing of ideas with colleagues and friends, old and new.

Peter Nachtrieb talks to nine other Bay Area-based playwrights about their connection to where they live.