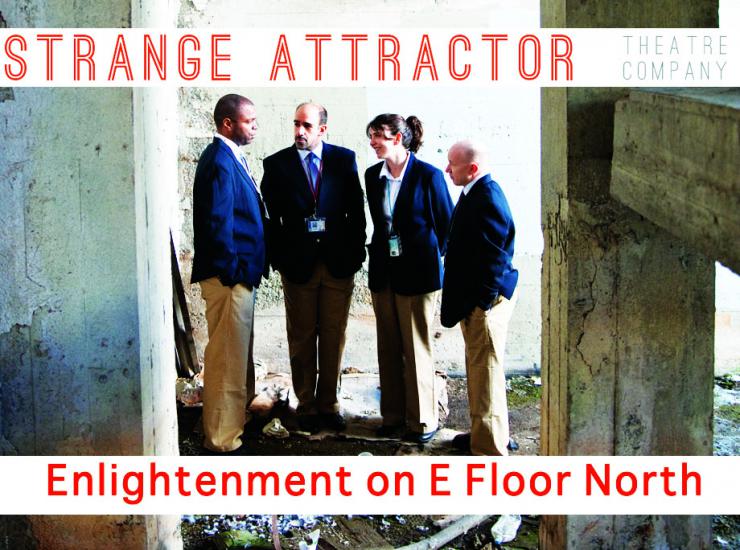 Simultaneous to Strange Attractor’s performance in Juneau, AK, they will host a live viewing party at the Empire Black Box at 95 Empire St in Providence, RI.

Not in Providence or Juneau but still want to participate? Host a watch party in your city and join the conversation on Twitter hashtag #EFloorNorth, #howlround. Follow @attract_strange and @HowlRoundTV for updates.

In Enlightenment on E Floor North, Strange Attractor Theatre examines the museum security guard, shedding light on the invisible American worker by playfully questioning the endless cycle of mindless work and revealing what actually happens when people pass the time while on the clock. The large drama that comes from small events, co-workers as simultaneous adversaries and allies, and the tiny pointless rituals performed all day become fodder for a theatrical universe built on hierarchy, games, and being at the mercy of the time card. Conceived and led by company member Jed Hancock-Brainerd, who spent two years working as a museum guard, the Lecoq-trained company brings their character-driven, highly physical, and outlandishly absurd style to this piece about jobs versus careers and how you get through the day when you got nothing but time.

Over the past eight months, Strange Attractor has developed Enlightenment with residencies in: Pawtucket, RI at the Pawtucket Armory; Portland, ME at SPACE Gallery; Philadelphia, PA at the Pig Iron School for Advanced Performance Training; and Sitka, AK at the Sitka Fine Arts Camp. The Saturday, July 6 show will cap off a week at the Juneau Arts and Humanities Council, and following a weekend of shows there, the artists will complete their Southeast Alaskan tour with performances in Tenakee Springs and Haines. In September, Enlightenment will premiere with a run at the Philadelphia FringeArts Festival.

This activity is made possible in part by a grant from the Rhode Island State Council on the Arts, through an appropriation by the Rhode Island General Assembly and a grant from the National Endowment for the Arts, The Rasmuson Foundation, the Alaska State Council on the Arts, the Juneau Arts and Humanities Council, Alaska Arts Southeast, Inc. and the Sitka Fine Arts Camp, the Haines Arts Council, the Maine Theater Fund, and generous donors on USA Projects.

Strange Attractor Theatre Co. is Aram Aghazarian (Philadelphia, PA), Roblin Gray Davis (Juneau, AK), Jed Hancock-Brainerd (Providence, RI) and Rebecca Noon (Providence, RI). Together we create inviting and unexpected performance that challenges the popular conception of live theatre while engaging new audiences with original, high-caliber, physically devised work. Drawing from our shared training at the London International School of Performing Arts, the four core actor-creators reinvent the classic styles of clown, melodrama, commedia, absurd and  grotesque, while staring unflinchingly at the darkest spots of our shared humanity to uncover the sublime, the foolish, and the ridiculous. Our physically-based performance style, the diverse universes we explore, and the hilarious characters we discover, unnerve while entertaining and confound while delighting.

Since forming in 2010 Strange Attractor has created four full-length shows: 2010’s F.orward O.perating B.ase, a quick-change comedy about war and torture created and performed in Juneau for the Perseverance Second Stage; 2010’s Special Happy, an absurdist birthday party thrown for the entire audience created and performed in Providence, RI for Perishable Theatre and the Wilbury Group; 2011’s If You Shoot A Boot You Might Get Wet, which follows the lives of two insufferable eccentrics living in a house of suitcases and was created and performed in Providence as a co-production with Spanish company Rompecabezas; and A Terrific Fire, an environmental immersive performance, part haunted house, part adventure novel, based on Ibsen’s Brand, developed with Juneau’s Perseverance Theatre, Providence’s 95 Empire and Perishable Theatre. We are currently developing our fifth show, Enlightenment on E Floor North, an investigation into invisible American workers through the lens of the museum security guard, which we are developing in Rhode Island, Philadelphia, and Southeast Alaska throughout 2013.

Acting & Performance
Alaska
U.S. by State
Most Discussed
A Collective Call Against Critical Bias
Critical Mass
Most Watched
The Gathering from the CrossCurrents Festival
Wednesday 4 May to Saturday 7 May 2022
Upcoming
Livestreaming a Conversation: #DeafWoke with John Autry II
Friday 20 May 2022