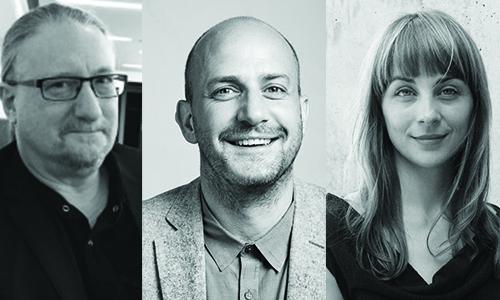 Join us for an evening with former and present Executive Artistic Directors of PS122: Vallejo Gantner, Mark Russell, and Jenny Schlenzka. They will discuss past, present, and future of PS122, one of the most influential theatre and performance spaces in the Americas.

Performance Space 122 began in 1980, emerging from a city struggling with high rates of poverty, crime, racial strife, and drugs, as well as the deaths of many vital artists and thinkers caught up in the AIDS epidemic. Together with AIDS Service Center NYC, Mabou Mines, and Painting Space 122, PS122 transformed an abandoned public school in the heart of a low-rise immigrant neighborhood into a multi-use community and cultural center.

Vallejo Gantner joined PS122 in 2005. Previously, he was Director of the Dublin Fringe Festival from 2002–2004, and Artistic Associate of the Melbourne Festival 2000/01. Originally from Melbourne, Vallejo has worked in a range of capacities throughout the arts in the US, Asia, and Australia—as a director, writer, performer, agent, producer, and programmer. He co-produced Spiegelworld from 2006-2008, a commercial producer/presenter of contemporary circus, cabaret, music across the US. More recently he’s performed in The Curator’s Piece by Tea Tupajic and Petra Zanki across Europe and in NY, Executive Produced the hit indie feature films Your Sister’s Sister and Touchy Feely by Lynn Shelton, and the upcoming Men go To Battle by Zachary Treitz and Kate Lyn Sheil and directed a new concert performance at the Irish Arts Center by composer/singer Julie Feeney. He is a partner in a micro-brewery—Mountain Goat Beer in Australia, and in 2006, he was a Deakin Lecturer in Melbourne. Vallejo also sits on the board of directors of Jianguo Pty Ltd (Aus), and Four Winds Foundation (Aus).

Mark Russell launched the Under the Radar Festival at St. Ann’s Warehouse in January 2005. UTR focuses on theatre based contemporary performance. The festival moved to the Public Theater in 2006 and has become a centerpiece in the New York City theatre season; mixing international performances with national and local artists. Russell has also served as the guest artistic director of the Portland Institute for Contemporary Art’s Time Based Arts Festival 2006-2008. He created the Off Center Festival for the Segerstrom Center for the Arts in Costa Mesa California, as well as the Off the Wall series at the Andy Warhol Museum in Pittsburgh, Pennsylvania. He served as an associate curator for the Act French Festival in New York in 2005. From 1983-2004 he was the Executive Artistic Director of Performance Space 122, bringing the space from an artist rental space to a world renowned presenting institution committed to developing the work of New York City artists. Russell has been involved with many artists over his career in dance, music, performance, and theatre, creating opportunities for them to reach wider audiences. In 2014 and 2015 Russell lived with his family in Lausanne, Switzerland, researching  European festival practice while maintaining his work with The Public Theater. He and his family are currently living in New York on the upper West Side.

Jenny Schlenzka was recently appointed Performance Space 122’s Executive Artistic Director and is the organization’s first female artistic leader. Prior to joining PS122, Ms. Schlenzka was the Associate Curator at MoMA PS1 in New York where she established the interdisciplinary live program Sunday Sessions. The program has featured artists such as Mette Ingvartsen, Ann Liv Young, and Justin Vivian Bond as well as new commissions by Trajal Harrell, Ragnar Kjartansson, Mårten Spångberg, Anne Imhof, Matthew Lutz Kinoy, and Tobias Madison, among many others. In addition to her event program that incorporated performance, music, dance, discourse, and moving images, Ms. Schlenzka also developed an interest in performance within the exhibition format, organizing at MoMA PS1 the New York presentation of Retrospective by Xavier Le Roy (2014) and Anne Imhof: DEAL (2015), both exhibitions with strong performance components. Prior to her work at MoMA PS1, Ms. Schlenzka was the Assistant Curator for Performance in the Department of Media and Performance Art at The Museum of Modern Art from 2008 to 2012, where she focused on presenting, collecting, and exhibiting performance-based art, including co-organizing the Performance Exhibition Series with artists like Tehching Hsieh, Simone Forti, Roman Ondák, Jerome Bel, Anne Teresa de Keersmaeker, and Allora & Calzadilla, among others. She has also worked as a curatorial liaison for KW Institute for Contemporary Art, Berlin. Ms. Schlenzka received her MA in cultural studies from Humboldt University, Berlin, in 2007. She was the recipient of the 2012 Yoko Ono Courage Award.

Nothing is an Answer, Everything is a Signal
Zach
Donovan
Essay

Nothing is an Answer, Everything is a Signal

On NYC’s the Shed and the Institution of Novelty

A Guide to Constructing Empathy

James Wyrwicz reflects on how two shows, Say Something Bunny! and Margarete, use found audio and video recordings as the basis for storytelling.