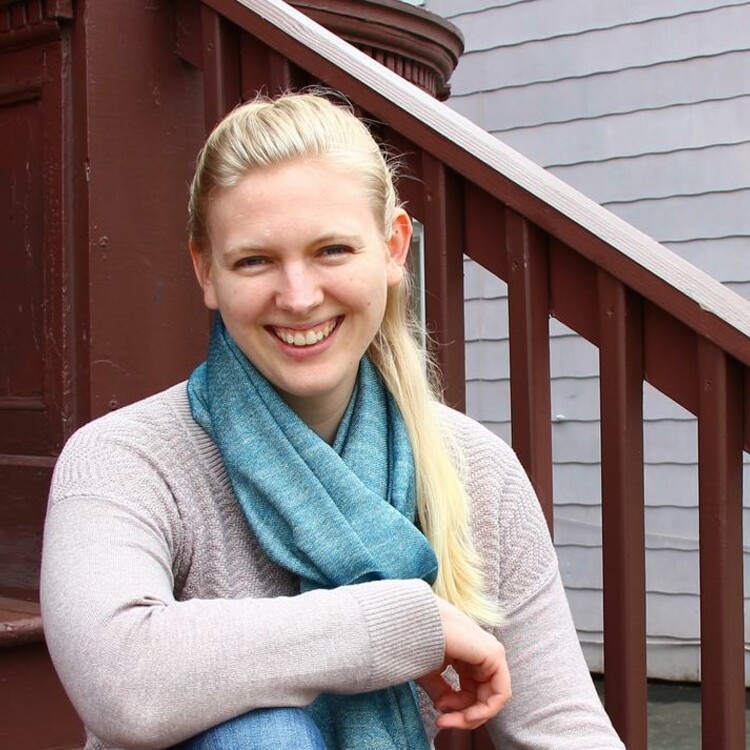 “Why is this the only way we learn women’s history?” This question was the last note I scribbled in my notebook while watching Heidi Schreck’s What the Constitution Means to Me at New York Theatre Workshop this past October.

Though broad in scope, this is an intensely personal question for me. I’ve spent the last four years studying the history of female solo performance in America, and I’ve often wondered why it took writing a dissertation on the topic to learn anything about women’s political, cultural, and social history in the United States.

Schreck’s play—of which she is the playwright and primary performer—is one that asks for a personal response. No matter how dated the rallying cry of second-wave feminists may seem to us now, What the Constitution Means to Me proves the ongoing validity and importance of the phrase “the personal is political.”

Alongside stories of Schreck’s own family history, the play teaches constitutional and judicial history. As Schreck explains to the audience at the top of the show, the performance centers on her attempts—as a teenager—to re-enact a speech she gave on the constitution at American Legion halls across the country while participating in debate contests to raise money for college. The contests’ guidelines encouraged debaters to make their speeches as personal as possible, and Schreck laments that her own connections to the document were insufficient compared with her rival’s stories about a pioneer grandmother. 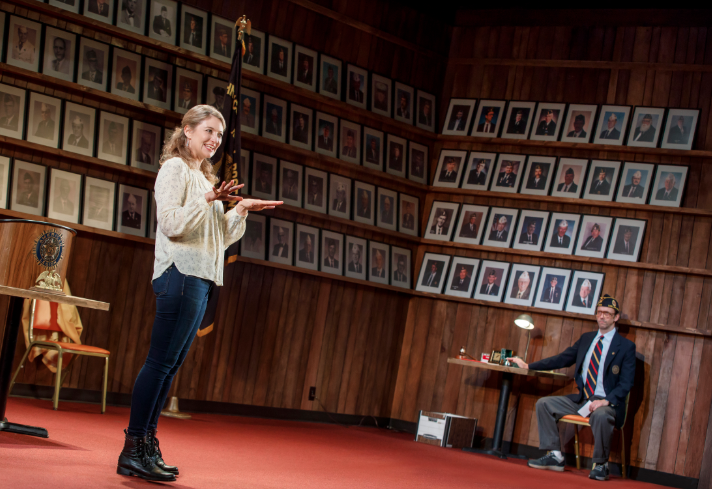 As an adult recreating the speech for audiences, however, connections between amendments, clauses, court cases, and Schreck’s own story spill out of the debate’s strict time-limits. Detailing generations of abuse suffered by the women in her family, Schreck’s speech is flooded with evidence of the constitution’s failings to protect anyone but the landowning white men who wrote it. These stories, clearly, are not what the Legionnaires had in mind.

Early in the play, Schreck introduces Justice William O. Douglas’s metaphor of the penumbra, the tool he used to find a constitutional right to privacy for his majority decision in Griswold v. Connecticut—the case that assured married women access to birth control and paved the way for Roe v. Wade. In scientific terms, a penumbra is “a space of partial illumination (as in an eclipse) between the perfect shadow on all sides and the full light.” In legal terms, the penumbra represents a “body of rights” that are not explicitly stated but can be inferred from “other rights explicitly enumerated in the US Constitution.” In addition to these definitions, Schreck points to another one: the space between audience and stage. Though cast in shadow and sometimes a trap, both legal and theatrical penumbras are spaces of possibility, making room for human rights or human stories that might otherwise remain in darkness. In literary terms, then, the penumbra becomes the metaphor on which Schreck builds her play, making use of the many murky regions between past and present, fact and legend, narrative and debate, and (of course) the personal and political.

No matter how dated the rallying cry of second-wave feminists may seem to us now, What the Constitution Means to Me proves the ongoing validity and importance of the phrase "the personal is political."

After Schreck introduces herself and explains the show’s premise, a figure clad in military garb emerges from the audience. This apparition (played by Mike Iveson) stands in for her original audience of Legionnaires. Along with the set—an oversized diorama of an American Legion Hall covered in pictures of men in uniform—Iveson’s presence places Schreck in an environment both hostile and mundane. She is a teenager in a pale-yellow blazer arguing before a sea of male faces. The more she speaks, however, the more she breaks the rules of the debate, taking up more time and turning more frequently to her family’s stories. Iveson remains on stage throughout; a reminder that when women take up public time and space, it is on loan from male authority. (The connection to the Kavanaugh hearings, which occurred the same week as the production’s opening, was lost on no one).

Schreck’s speech may be full of tangents and asides, but it is meticulously constructed and coalesces into a poignant argument. At one point, she explains the citizenship clause of the Fourteenth Amendment, notes that it leaves an unclear path to citizenship for immigrants, and then relates how her great-great grandmother was brought to the United States as a mail-order bride. When she moves on to the due process clause, she notes its importance to the Roe v. Wade decision and, as her fifteen-year-old self, proudly declares to the gentlemen in the room that she supports a woman’s right to choose, though she would never make that decision herself. She then steps to the side and, as her forty-year-old self, admits to the abortion she had six years later when she was playing Miss Julie in Seattle. The actor playing Jean was the father—“of course”—and she was on birth control at the time.

She shares this last point about birth control with a half apology for the need she feels to defend herself, and it’s one of the moments of the play that best illustrates Schreck’s penumbra metaphor at work. In the admission that she had an abortion, she distances herself from the fifteen-year-old girl who told groups of men that she would never personally make that choice. Yet she still feels a need to exculpate herself from accusations of carelessness or promiscuity. It is a scripted and politically motivated admission; one that she makes every night on stage. However, it feels completely raw—the very guardedness of the confession demonstrating her vulnerability as a writer/performer.

Later tangents continue to stress her difficulty with this admission, detailing how she failed to tell either her mother or grandmother about it at the time. And, thus, the manner in which she finally relates her abortion story demonstrates that it and others like it are penumbra stories—the kind you hide in the shadows and do not share until decades later.

Throughout the play, Schreck’s penumbra metaphor asks us to examine our gray areas a little more carefully. As a society, we’ve never been comfortable with either the nuance or the personal nature of so-called “women’s issues” like abortion or sexual violence, but we cannot let discomfort whitewash or blackout the great need to address these concerns in public. What the Constitution Means to Me is most powerful when it resolutely airs these issues while acknowledging the painful aspects of doing so. When the stories turn to rape, abuse, and violence against women, Schreck begins to read from notecards. She knows the lines, but finds the emotional toll, particularly the story of her Grandma Bette’s abusive second husband, too great to tell unfiltered. Her self-conscious, multilayered approach to storytelling accomplishes more than just her own protection. It draws special, critical attention to the stories and lessons in her show—allowing for both personal catharsis and political arousal in the audience.

As a society, we’ve never been comfortable with either the nuance or the personal nature of so-called “women’s issues” like abortion or sexual violence, but we cannot let discomfort whitewash or blackout the great need to address these concerns in public.

In the final act, Schreck stages a live debate between herself and a high school student, which moves the storytelling even more explicitly from black and white to gray. Two impressive young women debaters switch off performing this role every night: Thursday Williams (whom I saw) and Rosdely Ciprian. Like any good debate topic, the question at hand is polemical and provocative: “Should the United States Constitution be Abolished”? Shreck argues in favor of abolishment, with Williams or Ciprian being opposed. After detailing the many failures of the constitution to protect wide swaths of the population, Schreck’s black-and-white argument to throw it out is more appealing than it might otherwise be: “The constitution is bad, so let’s start again—this time with more positive rights.” Her opponent provides an optimistic outcome for the lessons learned in What the Consitution Means to Me. “No, the constitution isn’t perfect, but consider what it has accomplished through its amendments and what it will accomplish if we continue to advocate for universal human rights.” 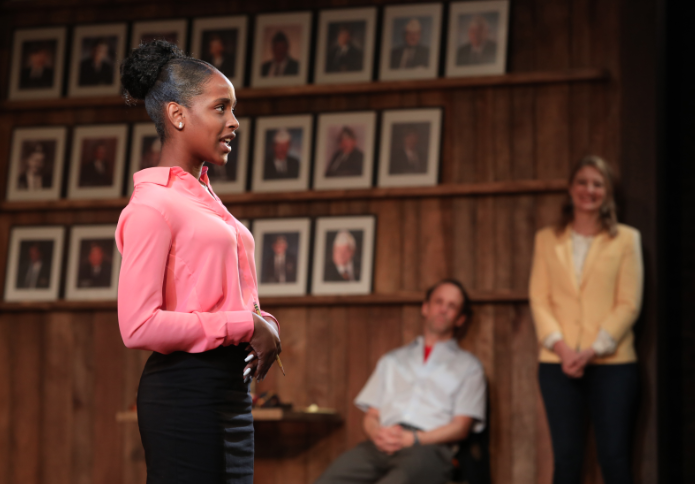 At the end of the debate, Schreck and her opponent choose an audience member to decide the winner on behalf of us all. The night I saw it, our representative was a teenage boy from Scotland, who cavalierly sided with Schreck to abolish the constitution. Barring the occasional Scotch wildcard, however, it’s quite clear that the debate is setup for Williams or Ciprian to win. They represent the voice of the future, and they want to keep working to make the constitution work for everyone. They are also the voice of the gray areas—of nuance, debate, empathy, and possibility—and this, ultimately, is what the show is arguing for.

No matter the debate’s outcome, Schreck ensures that every performance ends with finding hope in the shadows. At the conclusion of the show, she and Williams or Ciprian sit down together on the edge of the diorama. They dim the lights (cue penumbra) and ask each other personal questions. The first few are submitted by audience members from previous performances. The last question is always the same. Schreck asks her debate partner where she sees herself in thirty years, and, as the young woman details her personal goals and dreams, the political future suddenly looks brighter.

So… Why don’t we learn women’s history? Because: most of the time history is trapped in a penumbra, too terrifying, heartbreaking, or revolutionary to confront in the full light of day. By writing a monologue-heavy, autobiographical text within the framework of a moderated debate, Schreck demonstrates how women’s speech and their personal/political histories are so often policed, suppressed, and overshadowed. But with her carefully structured play, she also entices the audience into the penumbra with her, to hear, learn, mourn, and hope. She uses the penumbra of theatre—that space of partial illumination that makes so much possible—to confront these issues, air this history, and maybe, just maybe, inch our country towards a more perfect union.