I’ll never forget the cold December night in 2007 when August: Osage County finally opened on Broadway. We were supposed to debut in November but shortly after starting previews, a stagehand strike was called and the opening was postponed indefinitely. The delay was painful, not knowing when—or if—we’d get a chance to tell our story.

Everyone sensed Tracy Letts’ play was special, relevant, perhaps even important. Each day we weren’t in the theatre the pain grew more acute—made all the more excruciating because Dennis Letts, Tracy’s father and our patriarch onstage and off, was dying of stage IV lung cancer. 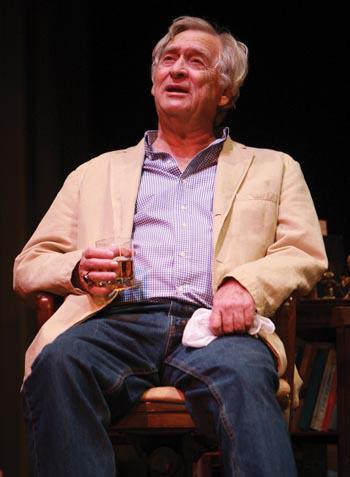 After nineteen tortuous days, the strike broke and we were allowed back into the theatre. The play opened to raves from audiences and reviewers alike but still, one of our own was dying. A few weeks later Dennis sat on stage opposite me for the last time, pouring himself out in a way that transcended performance—it wasn’t ephemeral, it was eternal.

After he passed, the set became holy ground. And the play, a consecrated thing. It wasn’t as if Dennis haunted the play; it was as though by honoring his spirit through remembrance, Tracy’s father blessed the story with a sublime depth of meaning.

Perhaps in part because of Dennis, August: Osage County has a kind of shamanic quality to it. Like an oracle draped in a prophetic mantel willing to show seekers what’s really going on beneath the surface of things. Ready to speak truths that may not be pleasant to the ears, but are medicine for the soul.

In light of this discussion about the need for more authentic Native American representation on the American stage, I’ve revisited the play—this sage—to find out what it has to say about the matter. 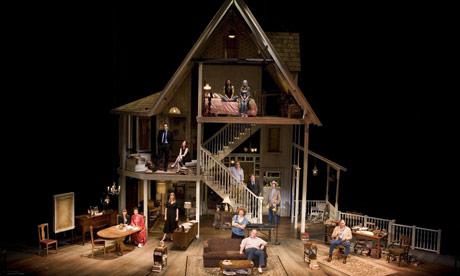 The cast inhabiting the set in London at The National Theatre.

Osage County is Osage County because it is home to the Osage Tribe. The whole play takes place on indigenous land, shedding light on the fact that—barring a handful of theatres on reservations—every stage in America is built on confiscated Indian land.

Secondly, there’s the playwright himself.

In a story as personal as it is political, why did Tracy Letts choose to include a Native character? In his words, “When you grow up in Oklahoma and you have Native American blood, that heritage is embedded in your DNA.”

Dennis Letts was a member of the Muscogee (Creek) Tribe. Along with European ancestry, he also passed indigenous DNA on to his sons. Tracy Letts is of mixed blood. The story of our nation is one of mixed blood. As storytellers, it is vital we engage every strand of DNA in our collective being in order to function at our highest potential.

Finally, there’s the role I played in all of this—the role of Cheyenne housekeeper, Johnna Monevata. 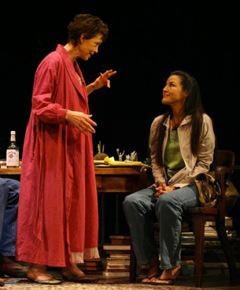 Deanna Dunagan as Violet Weston with Kimberly Guerrero at Steppenwolf.

Though some writers critiquing the play viewed Johnna as a “small piece of satire” (please read Osage poet Carter Revard’s response), dismissed the role as mere “device,” or ignored Johnna’s presence altogether, she is the spine of the play.

Johnna is the unbreakable thread on which the jewels of the story—hilarious and tragic, compassionate and merciless, insightful and inane—all hang with Pulitzer Prize-winning precision. Tracy cut, director Anna Shapiro polished, and a transparency was achieved allowing the play’s Native character to remain profoundly visible.

Johnna was meant to be seen living in her assigned quarters, the attic; the most remote, uninhabitable part of the entire house—a type of reservation.

Johnna was meant to experience long periods of staged silence—perennially present, but rarely heard from.

What message is our family, the American Theatre family, to divine from August: Osage County?

There are Indians in the attic!

There are multitudes of indigenous writers, directors, actors, choreographers, designers, and composers who have work to share that is special, relevant, perhaps even important. Every day we aren’t in the theatre, the pain grows more acute. Not knowing when—or if—our stories will be told. A reality made all the more excruciating because our Native people are dying.

When Native Americans—or any of those marginalized within its creative body—aren’t fiercely sought after and brought alongside to take their singular places on the front line of that battle, the effectuality of the American Theatre can’t help but be compromised.

So hire us. Produce us. Cast us. Not because we’re Native American, but because we’re good at what we do. Storytelling is in our blood. We have fresh insights, unique approaches, and valuable new perspectives to bring to the table.

American Theatre, this is a humble, but passionate plea to bring us down from the attic. Let us contribute to the family dinner.

And please don’t make us sit at the children’s table.

A great article. August: Osage County is a beautiful script and I use it as required reading for any class I teach (from Intro to Theatre to Stage Management). I've seen the play a number of times and I've NEVER felt that any director has understood the significance of Johnna. I so appreciate your insight.

Love to hear that theatrelover! Especially from someone who knows the theatre soup to nuts, as it were. I felt very, VERY fortunate from the get-go in the hands of both Anna Shapiro and Sam Gold (in The Old Globe iteration). Thank you for your comments!

Beautifully written. I'm reading August: Osage County right now, so it's very helpful to have this in mind as I read.

Thank you Amelia! What did you think of the play?

It's so beautiful! Definitely something I'll have to re-read a few times because of how layered it is. It's so well-written, though; definitely on my list of things to act in/direct in the future.

I was kind of hoping Johnna's character would be featured more throughout the play; she's clearly a crucial character, with the way she is written in, but I also feel like she had a lot more to say.

This brought back many powerful memories. Not only was Johnna central to the play but Kimberly was also the welcoming heart of the ensemble, knitting together a cast of colorful personalities with kindness and warmth.

Hope you are well, Little Charles the third.

Hello Dearest MM! Thank you for your kind response. Miss you, and our tribe. terribly and thrilled to watch your ongoing success!!!

Dennis Letts was a friend of mine, as was his wife novelists Billie Letts. Billie told me that when she was touring the state of Oklahoma visiting libraries to promote her last novel, she visited my hometown Cheyenne and spent some time among the people of the Cheyenne tribe. While there she learned of the custom of drying a baby's umbilical chord and then placing it in a pouch which was worn for life. Billie said she was going to use that in her next novel, but Tracy said he needed it for a play he was writing. To me that one thing is the essence of the play. The family to which we are born defines us for life--for better or worse.

Hey Ken! What a FASCINATING backstory to that umbilical cord necklace. The original one I used in the Steppenwolf play is not three feet from me as I type this. And I sent it on the road with Delana Studi who played "Johnna" on the tour. Thank you for sharing this. And how lucky were we to know and love Billie and Dennis. Billie + Dennis = Pulitzer Prize winning genius that somehow manages to stay humble. :)

Great piece. Your thoughts on Johnna's silence remind me of an article by the theatre scholar Odai Johnson who radically reframes Roman comedy as a genre by and featuring slaves, shot through with mutae personae -- silent characters -- whose presence around the edges of wild physical comedy is no accident. Johnson reminds us (as do you) that absence of evidence is not evidence of absence. Here's a link to the article for anyone who's interested: http://mlq.dukejournals.org...

Thank you so very much for sharing this article by Odai Johnson. What a deep and rich connection you've drawn here. WOW. "Absence of evidence is not evidence of absence." That is one that will stay with me a long, long time, both as an actor and a writer!

L.M. Bogad shares the story of the beginnings of Clandestine Insurgent Rebel Clown Army, several tenets of “clownfrontational” tactics, examples of rebel clowning in a different contexts, and more.

Virtual Reality and the Trump Effect

A Man For This Season
Manuel
Betancourt
Essay

A Man For This Season

Manuel Betancourt on the Young Vic’s production of A Streetcar Named Desire by Tennessee Williams at St. Ann’s Warehouse.