In the Intersection | HowlRound Theatre Commons Skip to main content

Recommended
Devising Our Future
HowlRound Theatre Commons
Most Discussed
A Collective Call Against Critical Bias
Critical Mass
Most Watched
The Gathering from the CrossCurrents Festival
Wednesday 4 May to Saturday 7 May 2022
Upcoming
Livestreaming a Conversation: #DeafWoke with John Autry II
Friday 20 May 2022
Essay by
Diane
Ragsdale

Partnerships in the New Play Sector 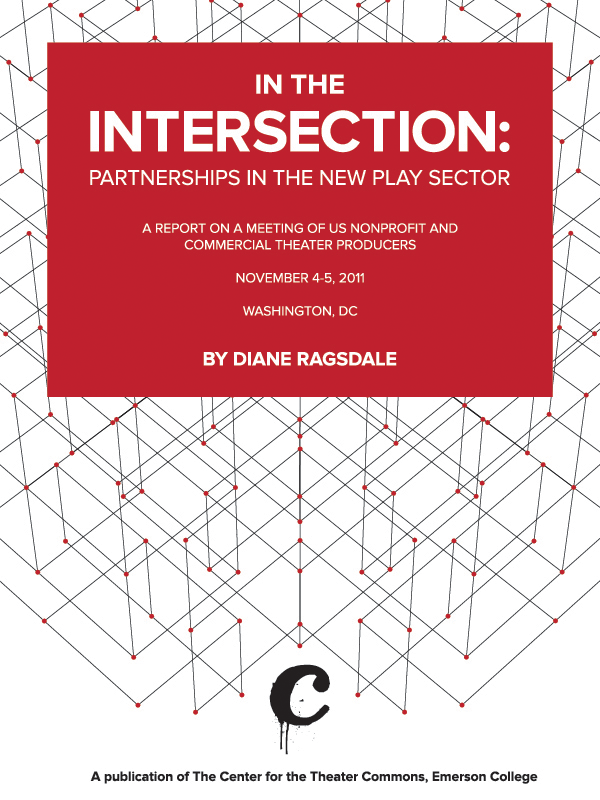 In November 2011, twenty-five theatre professionals gathered in Washington, DC, to discuss not-for-profit and commercial collaborations aimed at the development of new theatrical work. In spirit (if not structure and size), the meeting represented the third installment of an ongoing conversation that was sparked in June 1974 when 224 representatives from the American theatre gathered at Princeton University to entertain the (then) remote possibility of cooperation between the not-for-profit and commercial theatre in the interest of advancing the American stage. The 1974 convening was highly contentious, and more than a quarter of a century would pass before another would be scheduled. By the time the conversation was rekindled in 2000, and a comparably constituted group gathered at Harvard University, much had changed: once unlikely alliances with commercial producers had become business-as-usual for a number of not-for-profit theatres.

So begins In the Intersection: Partnerships in the New Play Sector, the report on the November 2011 meeting, released today by the Center for the Theater Commons at Emerson College (and written by yours truly).

As many will recall, the resident theatre movement in the United States was perceived to be a revolution: an attempt to create a viable alternative to the commercial logic that dominated the American theatre in the first half of the twentieth century. Though things would begin to unravel for the resident theatre movement by the end of the decade, at the 1974 meeting it was still confident and idealistic. As I write in the report, an alternative theatrical arena with alternative financing, goals, and values had been successfully created and it was gaining legitimacy. Broadway was no longer the only (or even preferred) destination for new work. Aside from the clear ambitions to align interests on the part of the commercial producers, what emanates most from the report on the 1974 meeting is the sense that not-for-profit theatres were still actively defining themselves in opposition to the commercial theatre.

Though things would begin to unravel for the resident theatre movement by the end of the decade, at the 1974 meeting it was still confident and idealistic.

By the meeting in 2000, however, collaborations between not-for-profit and commercial producers had become commonplace. And while some continued to question whether deals between the two sides would corrupt not-for-profits, they seemed unable to persuade others in the room that there were reasons for concern. Commercial/not-for-profit partnerships were resulting in high-quality (even Tony award-winning) shows, some of which recouped their investments; successful shows brought both prestige and critical income to not-for-profits, most of whom were facing an increasingly tough financial environment.

Opinions on commercial/not-for-profit partnerships in the theatre have been, and continue to be, divided, with some seeing them as a positive development (or at the very least benign if kept in check), some as a necessary evil, and some maintaining that they are, or will be, a corrupting influence on the values of the not-for-profit theatre. There are perhaps those that will read the report on the 2011 meeting and want it to be a clear-cut case for discouraging not-for-profit/commercial partnerships; others, the opposite. From my perspective, it is neither.

It is the documentation of twenty-five passionate, intelligent, open-minded people who love the theatre attempting to grapple forthrightly and personally with difficult realities, among them: the challenge of attracting sufficient funds and audiences to sustain large not-for-profit institutions with Broadway-sized venues and high fixed costs; the exorbitant costs of real estate in New York and the seemingly impossible economics of successfully producing on Broadway (or commercially Off-Broadway); the fact that the culture has changed dramatically since the formation of the not-for-profit theatre sector and, with it, the tastes and values of foundations, corporations, government agencies, board members, individual donors, audiences, and other stakeholders; and the reality that it has become increasingly difficult, given these challenges, to produce the ambitious, transformational kind of theatre that many set out to make when they got into the theatre, much less uphold the original ideals of the not-for-profit resident theatre movement.

I am close to both the report and the subject (since my research topic for my dissertation is the evolving relationship between the not-for-profit and commercial theatre over the past thirty years); thus, rather than commenting further on it, I will leave you with a key passage from the executive summary with the hope that it will entice you to read the full report and share any comments you may have. I welcome them.

Here is a link to the HowlRound Store where you can purchase a copy of the paperback version. Amazon also has electronic copies for 99 cents.

I will close by saying that throughout the two-day convening I was struck by two things: the complexity of the issues (which are clearly agonizing at times for those dealing with them) and the generosity of spirit of all who attended the meeting. I am grateful to P. Carl and David Dower for inviting me to write the report and the participants for trusting me to do so.

What I’m trying to say is that there are certain ideals that were constructed for the not-for-profit theatre, which I have not heard a word about in the last two days. We all deviate from the ideals—ideals are meant to deviate from. But you have to know what they are in order to deviate from them. And what I’m not hearing is the fact that there was a time when we were different theatres, we did different things. We didn’t join together to do the same things to please the largest number, to bring in the greatest amount of money and the greatest subscribers. We did, as a not-for-profit theatre, most of us did these things because nobody else would do them! —Bob Brustein

If there was a recurring theme to the 2011 discussion, it was that the not-for-profit theatre appears to have lost sight of its values and raison d’être. While commercial partnerships were not perceived to be the cause of this erosion of ideals, necessarily, participants acknowledged that commercial transfers from not-for-profits have increased in frequency (within organizations and across the field) and—along with box office success, reviews in the New York Times, enhancement income, royalties, Tony awards, working with celebrities, and the other “bells and whistles” associated with them—have become increasingly important measures of success at many LORT theatres.

Collaborations and partnerships were generally considered to be beneficial by the group, with both commercial and not-for-profit producers acknowledging that there is work that would not be created were it not for these partnerships.

Collaborations and partnerships were generally considered to be beneficial by the group, with both commercial and not-for-profit producers acknowledging that there is work that would not be created were it not for these partnerships. At the same time, concerns were expressed. Among them, that the goals and values of not-for-profit and commercial producers can be at odds; that costs and risks associated with enhancement deals are escalating; that artists are often put in the position of serving two masters; that the prospects of a Broadway run can change the artistic process and product; and that such partnerships have the potential to create a legal and moral slippery slope for not-for-profits.

If there was a clarion call from the meeting, it was perhaps for clarification around this moral line—what some called the value proposition of resident theatres. There was a sense that regional theatres have been, to some greater or lesser degree, falling down on their watch—not providing adequate support to artists; not taking the artistic risks that they were created to take; not existing first and foremost for their local communities; and, most of all, not upholding alternative measures of success and an alternative set of values to those upheld by the commercial theatre. While there was agreement that a larger shift in the values of the culture at large has created an environment increasingly less supportive of the not-for-profit theatre and that, in many ways, the not-for-profit theatre has simply turned toward the market (by necessity) along with the rest of the culture—there was also a pervasive sentiment that the not-for-profit theatre, if it is to have a purpose distinct from the commercial theatre, needs to reclaim its lost identity.

PS: Beyond the excerpt that ends this essay, this post draws heavily on passages I wrote for the executive summary of the In the Intersection report.

Not-For-Profit Theatre and Commercial Theatre
Organizational Models
Most Discussed
A Collective Call Against Critical Bias
Critical Mass
Most Watched
The Gathering from the CrossCurrents Festival
Wednesday 4 May to Saturday 7 May 2022
Upcoming
Livestreaming a Conversation: #DeafWoke with John Autry II
Friday 20 May 2022

I think the work you're doing on the history and current status of nonprofit/commercial theatre production partnerships is immensely important for the field, the future of the art form in the US, and the future of playwriting.

All of the key issues are being dealt with -- or at least put on the table -- in the discussions you are documenting and if there are no solutions yet, at least the problem is beginning to be identified. Among those key issues: the rise in power of managing directors (introduced originally by the Guthrie) eclipsing that of artistic directors or at least profoundly challenging their authority; the unintended consequences of the subscription-based business model; the loss of the motivating ideals of the original regional theatre movement, driven by market forces beyond the control of our organizations; the "to-big-to-fail" structures of the largest rep companies; and the growth of commercial theatre thinking and values in rep company boards, affecting the assessment of organizational and artistic success.

One concept raised in this latest discussion may well be worth more detailed consideration: Is the US nonprofit theatre as represented by mid- to large-size resident companies being undermined by its continued use of a manufacturing model instead of embracing an R&D (research and development) model?