Long Distance Affair, a PopUP Theatrics international collaboration between playwrights, directors, and actors worldwide, is a project conceived by Ana Margineanu, developed with Tamilla Woodard, and produced by Molly Morris. It is being presented at the 2013 Edinburgh Fringe. This is a three-part series on the process behind making Long Distance Affair.

Tamilla Woodard: For artists, Long Distance Affair is an international collaboration that allows playwrights, directors, and actors living in different parts of the world to meet and work together without having to travel to one central location through using Skype. 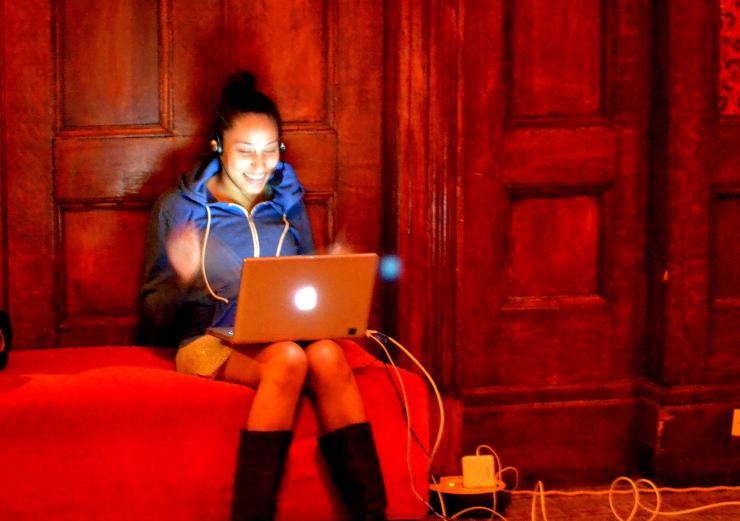 For audiences, Long Distance Affair is more of an experience to engage in rather than a show to go to and sit back and watch. Each ticket allows an audience member to virtually travel to three countries and have three personal encounters. The audience is invited to one location in an environment meant to inspire familiarity and playfulness and privacy —a hotel salon, a meeting room, on a stage—and then, while they lounge on couches, sit at pianos or simple desks, they watch the show on a computer, via Skype—they interact with the actors, who are performing from the intimacy of their own spaces, most often their own homes.

In this moment for Edinburgh, Ana and I have gathered no less than fifty artists and teamed them up to create eighteen unique one on one encounters. These artists hail from seventeen different countries, spread over six continents!

Garret: How did Long Distance Affair get started?

Ana Margineanu: Like most things, it started out of a contradiction. First, there was a hunger to create a work in New York City, and second the reality of no money, no rehearsal space, and no stage. The only resource there was at the time of the idea were my human connections with artists around the world as hungry to create work as I was.

I was very new to New York City, myself, having recently immigrated after my long distance relationship with my boyfriend had bloomed into marriage. I was using Skype a lot to keep in touch with my family back in Romania. At some moment I thought, why not use Skype in our artist lives the way we use it in our personal lives?

It began as a crazy experiment and at that moment I never imaged that it would grow so much and evolve into the full theatrical event it has.

Ana: If we count the very first trial, we've done this four times. Aside from the fact that we have more and more artists each time, the most dramatic change is how this virtual travel is presented. It’s becoming a more holistic theatrical event from top to bottom, from the time the audience enters the space until they exit the venue.

For example in Mexico, we did not have a hostess—just guides and six computers in a meeting room. However in New York last February, the show took place in a lush, red velvet meeting room at the Gershwin Hotel and began by with a beautiful actress in a ball gown offering kisses to the audience members in the hotel lobby. The role of the Hostess is growing into a fully developed theatrical moment for which our actress, Charlotte Purser, will travel from New York to perform in Edinburgh and Peca Stefan, one of our most frequent collaborators, will pen.

It has challenged us to go deeper and deeper in exploring what is meant by internet connection. What is the camera? What can these things offer us as collaborators in theatrical terms?

Also, by having more and more artists participate each time (twenty-one the first time, over thirty for New York, and now over fifty), it has challenged us to go deeper and deeper in exploring what is meant by internet connection. What is the camera? What can these things offer us as collaborators in theatrical terms? In each presentation we go further and further into this exploration of the technical medium.

Tamilla: In terms of production, the experience of having curated now four separate Long Distance Affairs makes us much better at communicating with the artists we've invited. We try to help them understand and take risks and embrace the extraordinary possibilities of the collaboration as well as the challenges.

Overall Long Distance Affair is becoming a community—and the affairs get wilder and wilder!

Ana: When dealing with people from so many different places, cultures, and rhythms of working, you can never say anything too many times.

Garret: What's new for this version?

Ana: And then, who wouldn't be thrilled just to be presented at the world’s largest theater festival?

Garret: How does technology change the theatrical experience? 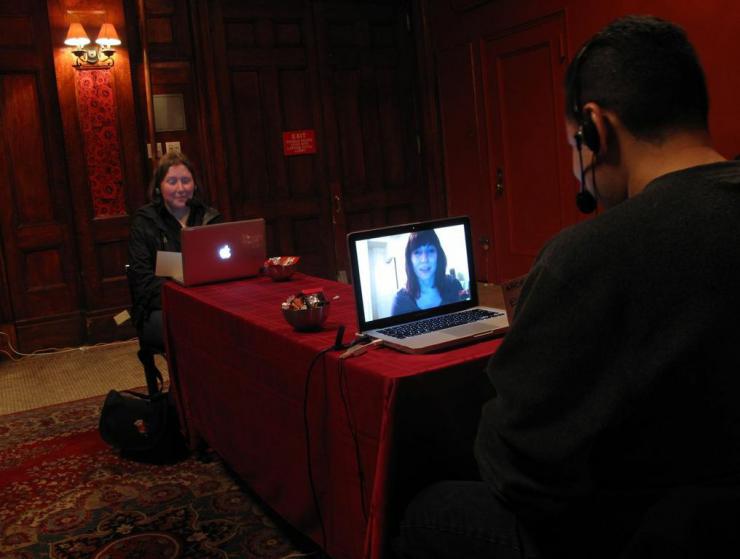 Tamilla: Because we use a camera, Long Distance Affair is an interesting cross between theater and film. We are actually using film techniques in the creation of theater. Every moment can be deliberately framed as if it were a film. In the proscenium theater there is no possibility of a close up. But here we can have a close up and a long shot. We can really curate where the audience’s eye goes.

Ana: Also, the medium makes the spectator more prone to interact, because they feel less exposed. If the audience were alone with one actor in a room, they might be shy. But thousands of miles of distance and a computer screen seems to make them very daring.

Garret: What's been your favorite part of your past Long Distance Affair experiences that you are looking to share with audiences in Edinburgh?

Tamilla: Our favorite moments actually happen at the end of the events. I love the moment audiences receive something from one of the affairs. It’s so unexpected, after they have had this virtual rendezvous to actually receive a physical token of the encounter. Sometimes it's a piece of cheese, a grain of cooked rice, a frayed wire from a lost connection. They are so often surprised and delighted.

Ana: My favorite moment is the writing of the postcards. Spectators are asked at the end to write a postcard to any of the affairs they chose. I love that all of them are writing to characters and not to actors. I love how intimate the messages can be. Some of them give advice. Some of them share their own love stories. Some of them leave their email address and phone numbers.

After each evening's performance, we read all the postcards written that night to the actors. It’s like their curtain call. And then the actors tell a few anecdotes of their own connections made that night. It’s also touching to see how the actors are awaiting their mail at the end of each night, like children waiting for Christmas presents.

Garret: What does the future hold for Long Distance Affair and Pop Up Theatrics?

Tamilla: After Edinburgh we pack our bags for Buenos Aires in November. We are going to create a Long Distance Affair in Spanish, involving eighteen brand new teams, with fifty-four artists under age thirty. We've done three processes in Spanish speaking locales now. This one is the biggest and unlike the others—the working language will be totally Spanish.

I had my play skyped to me from Canada---it was thrilling! This sounds like that and so much more: the postcard idea is fantastic.

Love this! Can't wait to experience it for myself in Edinburgh! -cdcrouch