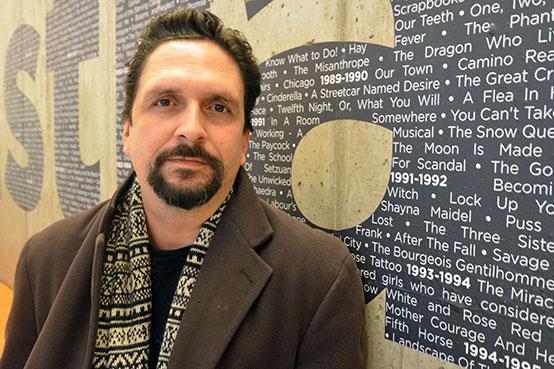 Anne García-Romero: Who were your teachers/mentors?

Carlos Murrillo: My education in theater was pretty scattershot. I studied acting as an undergrad at Syracuse, dropped out after less than a year, then moved to New York City in the early 90s. There I tried to learn from anyone that would let me into their world—I got to learn from some incredible people. I hung around the folks at Circle Rep and NY Theatre Workshop. I studied playwriting with Maria Irene Fornes and Eduardo Machado. I spent a couple of years working in the literary office at The Public Theater with Morgan Jenness and Shelby Jiggetts-Tivony, and did a year as a research assistant to Robert Woodruff. I took workshops with Anne Bogart. I was fortunate to have David Greenspan direct a couple of my early plays—I never got around to doing the MFA thing—I followed what I think of as a “medieval apprentice model,” which I think has served me well both as an artist and a teacher.

Anne: Can you share a brief story about learning from a teacher of yours and/or some words of wisdom that your teacher imparted to you?

Carlos: Maria Irene Fornes once told me: “You have to write a lot of shit before you write anything good.” I work with undergraduate playwrights—getting them to understand that plays rarely hatch fully formed, but rather are the outcome of a lengthy process, is one of our major learning goals. I still find it a useful guide in my own work, especially when I am at the very beginning stages of writing a new play. My students start off impatient—“I don’t want show it yet because it’s not perfect.” I try to teach them that a) perfection is rarely attained; b) to attain perfection you must start with inherently flawed goods; c) in every crap thing you start with there is at least a tiny node of something that if pursued, gnawed on, and peeled apart, will lead to something really good.

I also remember an actor asking Robert Woodruff something about a particular moment in rehearsal and him responding, “I don’t know.” The most brilliant person in the room—hell, one of the most brilliant people I’ve ever met—can fearlessly say, “I don’t know.” Paradoxically, saying so gave the actor permission to explore some far out, wildly counter-intuitive, places. What she ultimately found was absolutely right. Woodruff’s “I don’t know” gave her the space to try, fail, try again, and crack through to make something true.

a) perfection is rarely attained; b) to attain perfection you must start with inherently flawed goods; c) in every crap thing you start with there is at least a tiny node of something that if pursued, gnawed on, and peeled apart, will lead to something really good.

Alice Tuan: In what venues, forums, and contexts have you taught playwriting?

Carlos: I head the BFA playwriting program at The Theatre School at DePaul University, where I’ve been teaching for about a decade. It’s a conservatory program, so it’s a pretty rigorous place blessed with a deeply committed student body and faculty. I also do visiting gigs from time to time at colleges, theaters, and community organizations. In those contexts I’ve worked with folks of every stripe—from MFA candidates, to undergrads, to septuagenarian enthusiasts, to at-risk youth.

Carlos: I’m catching my playwrights at a formative time in their lives, so at the beginning of their training my job is to give them the tools to discover and coax out their distinct, individual, idiosyncratic voices and worldviews. I think once they discover this, a seismic shift occurs for them: they no longer write towards assignments or page goals I give them, they write from an inner, core imperative. I avoid advocating for particular stylistic or formalistic approaches—I certainly don’t want them to write like me. My playwrights run the gamut from psychological hyperrealists to fantastical illusionists (they’re also free to hopscotch from being one to another and everything in between) and I like it that way—their plays should be unmistakably their own. When a student comes to me saying they want to write a play about an all-female Thin Lizzy tribute band, or a play in verse about the last two survivors of an ecological catastrophe whose fates are determined by the whims of Gaia Divine, a god in the form of an aging drag queen, I can only say yes and yes and yes. In our program we’re training our writers to give the reins to their imaginations, yet at the same time impart a level of discipline and understanding of form to contain them.

Carlos: The tools/skills students develop writing plays and making theater are useful and applicable in almost any field. The capacity to execute tangible works from pure imagination, to engage effectively in a collaborative process, to express oneself with clarity and conviction, to think critically in regards to one’s own work as well as others’, to see the world from multiple perspectives, to stretch limited resources to their maximum efficiency—who wouldn’t want to hire someone who can do all that? Many of our student playwrights have continued successfully in the field. Others have found success in other fields. I like to believe that the time they spent with us contributed something to their journeys.

Anne: What are the deeper benefits of exploring drama writing and its forms and how do they help us understand, articulate, unpack a more and more complex, technological world?

Carlos: I’m not sure if dramatic writing in and of itself can help us understand the present acceleration of technology and the inevitable merging of human beings and intelligent machines. I believe the exponential acceleration of technology has created a fundamental paradigm shift in human existence—as decisive as the invention of the printing press or the wheel were in their respective eras. But even more so, and faster. The way we communicate, tell stories, relate to each other, extend our consciousness into the machines we use, engage in commerce and the marketplace of ideas, extend life, exist in a landscape where access to all human knowledge is being democratized—how we define humanity itself—all that is transforming. I think this frightens many people, especially people in the theater. We like to think our old vinyl records sound better than their digital counterparts. Which may be subjectively true, but objectively sounds like a recipe for obsolescence.

For me, I say bring on the brave new world. In a world where everyone is not only a consumer of free content, but also a potential maker of content that is cheap to make (YouTube has more hours of content than the entire history of broadcast television—and it’s only been around for eight years), what role does the storyteller play? Especially the theatrical storyteller? It’s a massively inefficient way to tell stories if you consider the resources that go into the upkeep of producing organizations, the amount of effort it takes to produce work in proportion to the number of people that stand to benefit from it, and the time it takes from conception to opening night. Maybe a few theaters will survive and end up like those niche bookstores we all love, and only seem to exist in certain cities and in funky college towns. Or maybe there’s some genius out there who can figure out a way to deliver theater as cheaply, efficiently, and pleasurably as Zappos.

This year I’ve actively challenged my students to really look at the tools at their disposal, the means of communication they use—the forms of story they are exposed to in the digital landscape—and explore their application to dramatic writing. The base text for my class on form this year is David Shields’ Reality Hunger: A Manifesto, which is essential reading for anyone who is thinking about these questions. It’s a manifesto of sorts that embraces wholeheartedly the present world shift and advocates for a wholesale rethinking of the future of storytelling.

Alice: Can scripting transculturation and the performance of it deepen our democratic promise?

Carlos: Sure. Sesame Street did it. We can too.

Anne: Can you share one writing exercise or classroom approach that is fundamental for you in establishing a space for your students to create new works for the theater?

Carlos: I teach a seminar that’s all about form. We look at things that are not plays. One week we might read the architectural theories of Le Corbusier or Rem Koolhaas, and the next we might delve into the evolution of Bob Dylan’s songwriting from 1962-1965. Or read the stories of Borges. Or listen to audio experiments from The Third Coast International Audio Festival. Or engage in a comparative study of the structure of the front page of The New York Times compared to other news publications. We then attempt to reverse engineer these artifacts to understand the principles of their construction, and explore practical application of those principles in writing performance texts.

Every other year we read Raymond Queneau’s Exercises in Style. A quick summary of the book: it begins with a very brief, purposefully mundane two-paragraph story. Queneau then generates ninety-nine variations on the story, each in a distinct “style.” I then ask the students to come up with a short play drawn from a mundane every day experience, and then write ten exercises in style from it—five of the exercises must correspond to variations in Queneau’s book, the other five the writer must come up with on her own.

Some student take-aways from this exercise:

1) They realize in a concrete/experiential way that all forms are up for grabs and usable/applicable/adaptable in a theatrical context;

2) Even the most mundane subject matter has explosive potential depending on the angle from which you approach it;

3) It’s an extremely useful strategy for when you need to crack through a block;

4) Sometimes you can arrive at depth through pure lightness.

Carlos, Anne, and Alice -- thank you for sharing this conversation. Carlos: I want to take your classes! Those lucky, lucky students.

Thank you for sharing your words. As an emerging playwright, what other books might you recommend I read?

Anne García-Romero and Alice Tuan interview Brooke Berman to find that academia helped Berman find the backbone to advocate for her work.

Anne García-Romero and Alice Tuan interview Kristina Wong about her “trial by fire” playwriting. Wong’s passionate about theatre that cannot be matched by a camera.