Robert Frost famously professed the benefits, when approaching a point of divergence in a journey, of taking the road “less traveled by.” Yet: I’ve found the travels that made all the difference for me have been on roads created from the convergence of multiple paths, merging snakelike into one another. The goal isn’t to explore undiscovered terrain, but the intersection of lands (supposedly) already traversed. How can investigating the crossover between disparate spheres provide fresh perspectives, possibly new insights?

Armed with this question, I enter into a year-long quest exploring the junctions of my two paths, or rather passions, in life: ensemble theatre and audience. 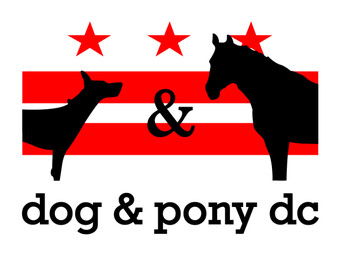 One. I possess a self-described “healthy obsession” with the triangulation of art, artist, and audience. In other words—I am endlessly fascinated with the relationships formed around a work of theatre by artists and audiences. This fascination guides, even "dictates," everything in my career as a theatre artist, producer, and administrator. Luckily I found people to share this obsession with: the eleven other company members of dog & pony dc and the host of artists with whom we collaborate.

d&pdc is an ensemble-based company in Washington, DC focused on devising performances that provide audiences new ways of experiencing theatre. We weren’t audience-fixated at first. d&pdc was initially founded as an ensemble company focused on remixing classical texts into contemporary performances. My two co-founders and I wanted to increase collaboration between all the players in the theatrical production—producers/administrators, artists, and audience. We believed ensemble-based collaboration would not only create stronger, more complex productions, but it would amp up the intensity and immediacy of shows in performance.

Over the course of a handful of productions, the audience experience quickly emerged as d&pdc's raison d'etre. We had always wanted our shows—whether original works or productions of previously written scripts—to shake up the stagnant theatre-going experience, aiming never to take the audience's presence for granted. With every show we were inclined to increase the audience’s agency and participation: first we acknowledged the audience's presence; then we casually interacted with them; then we moved them around the theatre; invited them to create their own characters; requested (almost required) they perform with us—literally assigning the audience parts integral to the show's narrative arc. We came to view the audience as our final collaborator in shaping productions; so much so that the company and board almost immediately came to agreement at our annual retreat last year that one of our defining values is "the audience completes our ensemble." Our collaborative, ensemble process transitioned to becoming the means to our “audience integration” ends.

When d&pdc began dialoging at the national level we were surprised by how broad and inclusive our definition of “ensemble” was in comparison with our colleagues. While we don't operate at the “consensus” end of the collaboration spectrum, we value transparency and inclusivity at all points in the production process from all participants and the audiences’ experience is the central component of our devising process. As we plan our company’s organizational development and artistic growth, we're trying to figure out—where do we fit into the spectrum of ensemble theatre? What can we learn from our colleagues? What do we have to share? How can we make stronger work? And, most importantly, how can we alter artists’ and audiences’ expectations for theatrical events in DC and the country?

While we don't operate at the “consensus” end of the collaboration spectrum, we value transparency and inclusivity at all points

Two. I see myself as an artist of two “types”: 1) a maker of theatrical experiences that are conversational in nature, and 2) a maker of interpretive opportunities around performances that build community. As much as my devising, directing, and performing is affected by my art-artist-audience, so too is my interest in engagement initiatives. My enthusiasm ignited quietly and smoldered throughout a twelve-year career in arts education and community-arts projects in regional theatre. It fully manifested and unleashed during my time at Woolly Mammoth Theatre Company leading the conceptualization and launching of their "connectivity" innovation. I served as the first Connectivity Director at a critical point in the emergence of the “audience engagement” field in regional theatres: social media became mainstream, “marketing departments” widely began reframing as “engagement departments,” and dramaturg-led audience engagement activities (e.g. post-show discussions) peaked in popularity.

At Woolly, I submerged myself in shaping systems that would allow the theatre to harness the power of its art and the resources of its city to reposition theatre itself as a center of discourse. I sought to develop processes that would be repeatable and yet yield results unique to each production, and involve many voices (staff, artists, current audience, future/potential audience, community members with a stake in the conversation shows teed-up). But as engagement became a leading buzzword, it remained almost exclusively on the lips and in the minds of administrators—and select administrators at that. In the past few years the conversation about audience and their engagement with and around the art has not been dominated by the artists making the work or the audience that takes it in. This feels like playing a football game without your receivers, most of the coaching staff, and another team.

What are the lines of communication between artists, arts leaders, and audiences? Why are artists/leaders making the art that they do? How is this vision translating to shared sense of purpose in organizations? With audiences?  With connection to communities?

One + Two = ?
At the 2012 TCG conference, Howard Shalwitz examined the “innovative” concept of a shared sense of purpose around productions in American theatre, making a case for increased collaboration between artists and institutions in play development and productions. Ensemble-based companies responded to the resulting benefits Shalwitz listed with a fairly resounding “but of course! it’s why we chose this method of creation.”

I am curious: do ensemble-based companies have this shared sense of purpose? They are primed and inclined toward artistic collaboration and exchange already, aren’t they? But who is involved in the production process and at what stage (particularly for devising ensembles)? How does process affect project? What is the relationship between the makers and the receivers, the artist and audience? (Is there one?) How do your “art,” “artist,” and “audience” triangulate?

As I seek to define the uncharted land dog & pony dc has inhabited, I need to survey the vast landscape around me—to learn about the transitioning relationships between ensemble companies, the communities they're based in, their impetus for creating, the people they create for, the manner in which they shape their experiences, and how all of this ultimately impacts the work they make. For myself and for my ensemble, beyond naming my healthy obsession with the triangulation of art-artist-audience as an ensemble theatre maker, I must interrogate and share.

Care to help me on my journey? Take five minutes to complete my Ensemble Theater & Audience Definitions Poll here.

Column exploring the junction of ensemble theatre and audience.

Hello Rachel - Thanks for the thoughtful and provocative article. As a member of a newly formed theatre company (2by4) in the Bay Area founded on the principles of cross disciplinary collaboration, emotional and intellectual curiosity, and a commitment to exploring what it means to truly be an art-making organization that is rooted in our community we are exploring (and being challenged by) the very questions you raise. Part of the excitement for us is how raising these questions helps us to see how deeply we have been influenced by some of the dominant creative and operational theatrical models - it forces us to ask the question "Is this how we want to make work. What do we really believe?". It also forces us to look at how we view the role of our audience (since we are developing one as a new company) in the making of our work. What I can say for sure is that while we have no answers at this point we certainly are generating a lot of questions. Which feels vital and energizing.

Nicely articulated Rachel. We all (theater-makers) need to pay a lot more attention to the audeince experience, not only because the possibility of doing so is/can be what makes theater distinct and essential, but also because the audience is changing. I don't mean that there is a monolithic "audience" and it is getting younger, or older, or broker - but that the larger context in which people encounter a piece of theater is constantly changing. And we need to attune ourselves to that!

You have chosen a holy quest.

Exciting! I'm thrilled you're taking this on, Rachel, and can't wait to read the next installment. I suspect that there will be strong take-aways for those of us making theater in more traditionally structured institutions. It always seems to me that the "connectivity" work, if allowed to truly create momentum, inevitably must effect the processes we use to make work and not just the way we present it. Thanks!

Triangulation has been the word I've been looking for! Thanks, Rachel!

Thanks Jeff! It is a favorite.

Isaac Mafuel talks about Malawi’s most prevalent form of theatre, its history, and its impact and challenges.

Writer and performer Rob Onorato explores what makes the Chicago Neo-Futurists so special.

Director Meggan Gomez reflects on working with her youth ensemble based in New Mexico to create _____ Historias, a play that is created in real-time in response to stories shared by the audience.