It All Comes Back to the Hook

Collaborators don’t have to agree. They have to trust each other. We have been friends since high school in Saginaw, Michigan, and so our trust is deep, and allows us to occasionally disagree. In 2010, we found ourselves in New York City at the same time and with the same sets of goals and interests. We agreed to begin to lay the groundwork for an open ensemble of artists brought together to create and produce original theatrical work. Initially we each invited three artists to join what would become Hook & Eye Theater—“Hook” being the spark that ignites our collective interest, and the “Eye” being the joint and several lenses through which we make our work. This early group became the "Core" ensemble, which has enjoyed a healthy rotation of membership each year, with members encouraged to explore with and without the confines of the company. For us, ensemble means connection, it means continuously celebrating, navigating, and wrestling inside the hive mind where disagreement gives birth to newness, and it most definitely means we value long-form, wild, collective creation over being jobbed into production after production with a hierarchical paternalistic structure.

Hook & Eye Theater operates with an eight person Core. We serve as artistic directors, managing the company's business and—aided by our long history and strong trust—helm the company through the sometimes dangerous waters of collaborative creation. Hook & Eye’s ensemble functions in concentric circles, with us at the hub, around us a core ensemble of eight who have the freedom to come and go based on life and career demands, and a larger circle of over 250 performing and visual artists which we refer to as our "Cloud" of artists. Invitations to create and perform initiate with us, and then ripple out through the circles of collaboration, through our core company, all our artistic colleagues in the “Cloud,” to the city's creative community at large, even our audiences.

Our process is open-source, inquiry-based and ever-evolving. We love hyphens. We flirt at the intersection of playmaking and script writing. We believe that theater requires the whole performer—mind, body, and voice. Often we draw strong, immediate connections that open up a dialogue between past and present, and play on themes of history, science, mathematics, and social justice. One of our guiding principles that has evolved this year is “Finding the Art in Smart”; not just smarty-pants theater, but deeply artistic human exploration of academically rigorous material. We want to offer our audience questions bigger and more nuanced than “who is sleeping with whom,” and let them instead think, “How can I find out more about that?” Each of our creative endeavors is an experiment at its heart. We begin with a spark—an idea that hooks our collective interest. Using improvisation, discussion, and research, we excavate and excite until we've found a story that can catch fire. Working with our writers, musicians, and artists, we roll the story around, adding layers, and eventually a piece comes into focus.

We strive to make the telling as captivating as the story itself. We invented the Rules for Creative Collaboration, developed over years of working together, and have put them into our ensemble practice. One of our pieces, Unlawful Gatherings, was based on historical source material (news articles, diary entries, and photos from the Velvet Revolution), and devised in workshop over nine months by several groups of artists. Another, The Summoners where residents of a small town are sequestered in a warehouse and forced to reenact their lives over and over in an attempt to bring back the sun, was co-written with a playwright and devised playfully around a central creative voice. With one of our next pieces, World Game: the Buckminster Fuller Project, we are unifying these approaches: we will involve all creative elements from the beginning, share the research burden, and employ a unifying directorial eye to create an engaging, complex, and provocative devised work. It will be performed as a live game. As theater artists, we want people to feel, and we aren’t afraid to make them think. We want to see if we can get them to play our game with us. 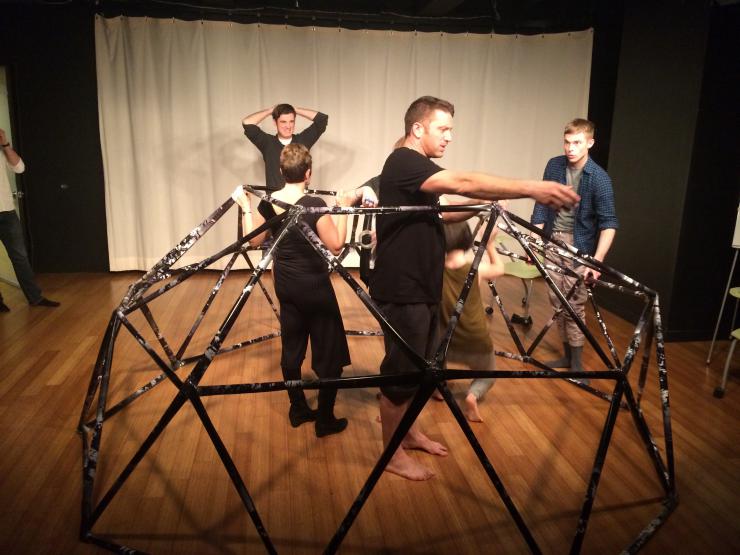 To keep the artistry fresh and flowing, we offer an annual seasons of PlayLabs, which are guided evenings devoted to new work and ensemble-driven creativity. Interested in expanding the limited notions of a "closed" company, we set about opening our world of collaboration to include the whole of the city's artistic community. We created PlayLabs to encourage new voices to join us, and to build our audience from within the community. We are now in our third season of the very successful program. Free to actors, musicians, playwrights, directors, and attendees, Hook & Eye's PlayLabs bring new short plays to life in an open workshop setting. The ideas, or “Sparks,” are loosely commissioned by the company. Participants are given a theme, and we draw names from a hat on the night of the PlayLab to cast the roles or improvisations. After a group warm-up, we divide into groups, and each "company" gets an hour to work, a director, a musician, or choreographer. The evening ends with a show and quick discussion of what has unfolded. It brings together the artistic community in a low-pressure, high-energy night of creativity. Often, these PlayLabs lend agency back to the performers to create content around what interests them based on suggested themes. We have found new Core members at PlayLabs, and cast from them as well.

In our educational programming, members of Hook & Eye Theater teach a variety of curricula from playwriting and cooperative playmaking to dance, singing, and song-making to individuals and groups of students. Our methods encourage group creation and critique, and help the individual find his or her voice. These community programs often culminate in a performance featuring the students with the full Core of Hook & Eye.

We’ll continue to grow and expand and create new and enlightening and terrifying pieces, and we’re committed to our Open Ensemble plan—to allowing artists to opt in on a project-to-project basis—and to keeping the doors wide open to new and emerging artists around the world. Leave your insecurities at the door—there’s a bowl for them—and come join us!

Seventeen Thoughts (in Random Order) about Neo-Futurism and Experimental Theatre

Can friendships survive a separation in time, values, and life choices? Carey Purcell looks at the quiet questioning of the role of women in Sheila by The Associates.