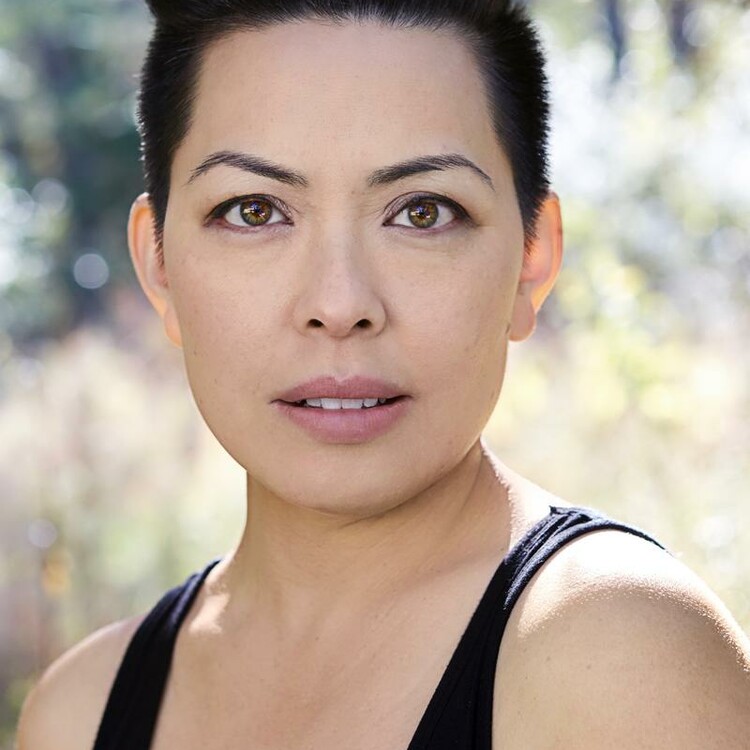 Jubilee for the Future

AAPI Theatre and the Promise of Solidarity

In mid-February of this year, I attended a preview of Cambodian Rock Band on one of the designated Asian American Pacific Islanders (AAPI) Community Nights, where Asian American theatremakers and friends are invited to fill the seats to build energy and support for a production. These performances intentionally gathered AAPI audience members in the spirit of the defiant disability rights credo: “Nothing about us without us.” Here was something about us, by us, with us, and for us in our infinite variations.

Directed by Chay Yew and written by Lauren Yee, the play moves between a Cambodia of the past, darkening with cultural erasure and genocide, and a Cambodia of the present, where survivors struggle to piece together memory and family. The past and present converge towards the end of the play in a pivotal final rehearsal of the fictional rock band, Cyclos, on the verge of performing for their first audience. The events of the play tempt us with the delicious possibility of these young Cambodian musicians: art that could have been. 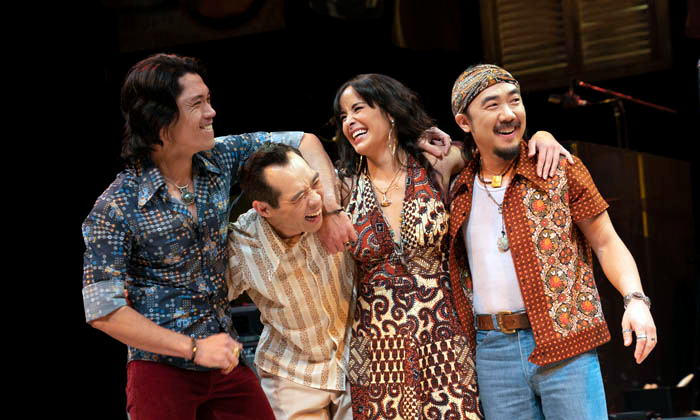 There Were So Many of Us

This preview performance of Cambodian Rock Band was intended to be the first of an explosion of AAPI productions during the month of March in New York City. A critical mass of productions seemed to overflow with not only the visibility of stories embodied and imagined by AAPI performers and playwrights, but also with the agency of AAPI directors and designers. And while AAPI creative agency has been in force since at least 1965 with the founding of East-West Players in Los Angeles, February and March of this year showcased an unparalleled multiplicity of voices of Asian descent. Notably, it was a spring when the Ma-Yi Writers Lab, founded in 2004 by playwright Sung Rno, saw their organized investment in AAPI playwrights for over fifteen years bear prolific fruit.

We were to witness the work of Labbies Hansol Jung (Wolf Play with stage management by Anita Shastri), Qui Nguyen (Poor Yella Rednecks, which follows the world dramatized in Vietgone, directed by May Adrales with lighting design by Lap-chi Chu), and Yee within the same season—undoing the isolated and tokenized status typically accorded Asian American voices. As part of the company’s main season, Ma-Yi had also shepherded the remount of Haruna Lee’s Suicide Forest, directed by Aya Ogawa, which ran right up until the pandemic hit, and for which Ma-Yi had coordinated special Japanese American community nights.

Affinity audience nights creatively disrupt the transactional pressure to measure success by ticket sales, part of the larger system of white supremacy that promotes economic scarcity to place and define those on the margins. Both the incubating nature of the Writers Lab and these community nights seeded abundance, looking beyond a production run, beyond a season, and towards a long-term shared purpose to create AAPI representation and narratives on our own terms.

The future cannot mean assimilating to existing structures; it means insisting on and carving out spaces that do not yet structurally exist. The future demands transformation.

Naming the culturally specific labor that made such a watershed spring possible is vital. What we can invoke and record, we can make claims on in the future. It is this future I envision as I step into my own role as the incoming head of acting at the Brown/Trinity MFA program. I draw on the wisdom, muscle, and care of leaders like Yew, Adrales, Ralph Peña, and Mia Katigbak of the National Asian American Theatre Company as I co-create a future with my colleagues and students. The future cannot mean assimilating to existing structures; it means insisting on and carving out spaces that do not yet structurally exist. The future demands transformation.

If creative liberation deepens our collective humanity, cultural erasure and xenophobia are its cruel opposites in depriving us of each other. In what seemed like an instant, the momentum of unprecedented acclaim and agency for AAPI theatremakers this spring transformed into an inverse rise of AAPI-directed bigotry and bias, scapegoating Asians and Asian Americans for a global pandemic, COVID-19. Layered onto this stage, devoid of the humanizing narratives in which AAPI artists and citizens have labored to see ourselves, this past May we instead bore witness to Minneapolis police officer and Hmong American, Tou Thao, playing a perverse variation on the stock Asian sidekick in his role in the extrajudicial murder of George Floyd. Thao’s bystander/accomplice looms as the tyrannical sum of us, playing his/our supporting role in the narrative, or pathology, of white supremacy. While Thao is not actually all of us, he is certainly one or even many of us.

AAPI theatremaking and the humanizing visibility it confers must include identifying, confronting, and rooting out anti-Blackness. Draping jingoistic red, white, and blue isn’t what we need to cover ourselves and this broken world in; believing in and valuing Blackness, Black lives, and Black artists and working towards a multiracial solidarity will put us on the shared path of repair.

Creative agency demands political consciousness. As theatre and our expectations of “liveness” adapt and shift, our citizen-artists selves can find defiance and inspiration in creative mutual aid. Indeed, BlackOut nights, as coined by Jeremy O. Harris, playwright of Slave Play, is a clear template for the disruptive joy of affinity found in the community nights for Cambodian Rock Band and Suicide Forest. The power of self-worth, indicting the cultural and economic oppression of white supremacy, flows throughout playwright and theatre visionary August Wilson’s 1996 address to the Theatre Communications Group. Wilson is a powerful ancestor of the current testimony of telling truth on racism, We See You White American Theater, penned by Black, Indigenous, people of color (BIPOC) theatre artists—with near eighty thousand signatories and growing.

As an independent educator, I have worked to incorporate a critical consciousness of how white supremacy shows up in theatre training. But any such efforts remain isolated until we can create an urgent and critical mass of political education and outrage—an ongoing public and collective analysis and disruption of power.

The season we planned for has taken a different shape. The streets have become the space where our narratives matter and amplify each other in resistance.

Since the spring, Asian American theatremakers have pivoted online to embrace the question of how to proceed in solidarity with Black lives. To build coalition with integrity necessitates an examination of how white supremacy permeates theatrical traditions and current practice. Bay Area’s Cal Shakes, led by artistic director Eric Ting, embarked on an ongoing series entitled Direct Address featuring multiracial panelists, beginning with a conversation called “Allyship + Anti-Racism.” Lily Tung Crystal, artistic director of Theater Mu in the Twin Cities, hosted a playwriting partnership in the spirit of Black and Asian solidarity, pairing Black and Asian writers for original work in response to George Floyd’s murder, performed live online in RE:Plays. And the Consortium of Asian American Theaters & Artists (CAATA), led by Perseverance Theatre’s Leslie Ishii, shifted from an in-person gathering to a virtual series for what was to be the seventh annual Asian American Theater Festival and Conference, honoring and centering Native Hawaiian and Pacific Islander voices. In response to economic stress and the uncertainty of safety wrought by the pandemic, CAATA’s panel “Modeling Solidarity: Theater As Political Action” recently gathered BIPOC theatre leaders to share and build community and resistance.

Enormous credit must go to theatre educators Nicole Brewer, who has worked openly and fiercely at the frontlines of developing explicitly anti-racist theatre training, and Erin Michelle Washington, who creates learning and liberation in Black space, drawing from a rich tradition of wholeness outside of white, Eurocentric paths—among so many others. The future of theatre training, of transformation, has its visionaries. 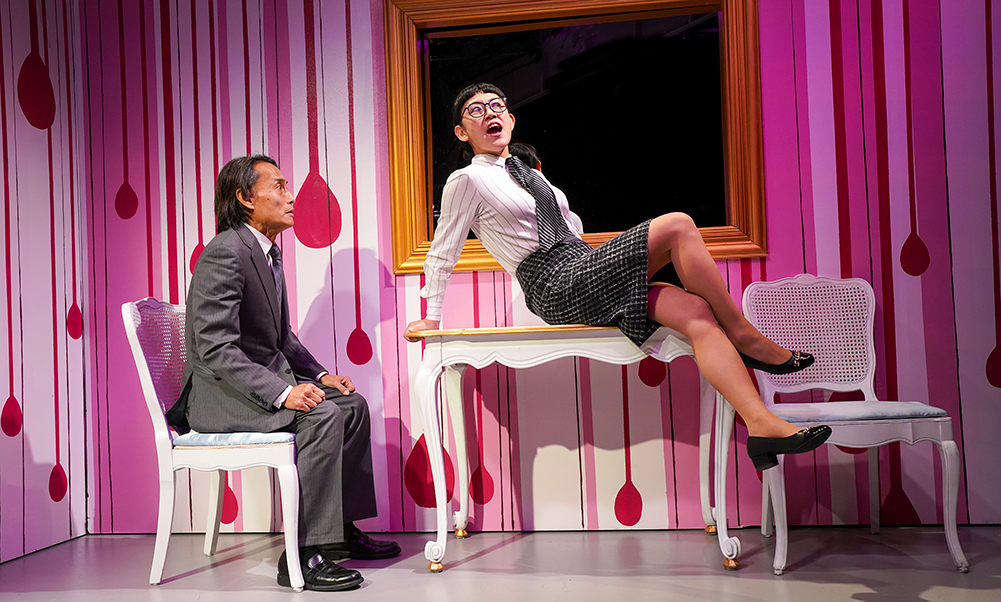 Suicide Forest by Haruna Lee and directed by Aya Ogawa. Produced by the Bushwick Starr in association with Ma-Yi Theater Company. Photo by Richard Termine.

“We have different ideas of what a party is.”—August Wilson

In the fall of 2015, the Committee for the Jubilee shared a celebratory vision for the industry on HowlRound that would take shape in 2020—“in which every theatre in the United States of America produces works by women, people of color, artists of varied physical and cognitive ability, and/or LGBTQA artists.” It would be called the JUBILEE.

Here we are, in the fall of 2020. For those of us who create in classrooms, we are, like the modern-day characters in Cambodian Rock Band, gathering to piece together memory and community. What kind of training truly binds all of us together in purpose? What must we finally let go? The season we planned for has taken a different shape. The streets have become the space where our narratives matter and amplify each other in resistance. I celebrate the emergent reality that political consciousness and education—an analysis and disruption of power—are becoming fundamental to our identities, survival, and, ultimately, success as artists.

Art that could have been. Art that must be.

As an AAPI theatremaker, educator, and citizen, I choose to lean into the loss and grief of the voices and spaces that were shuttered this past spring. I also choose to become intimate with outrage at the culture of white supremacy that labors to determine what and who matters, and what and who does not. And, finally, I draw grace from fellow visionaries in the field—because we never work alone—to carry with me into the classroom, in theatres, and in the streets.

There are so many of us.