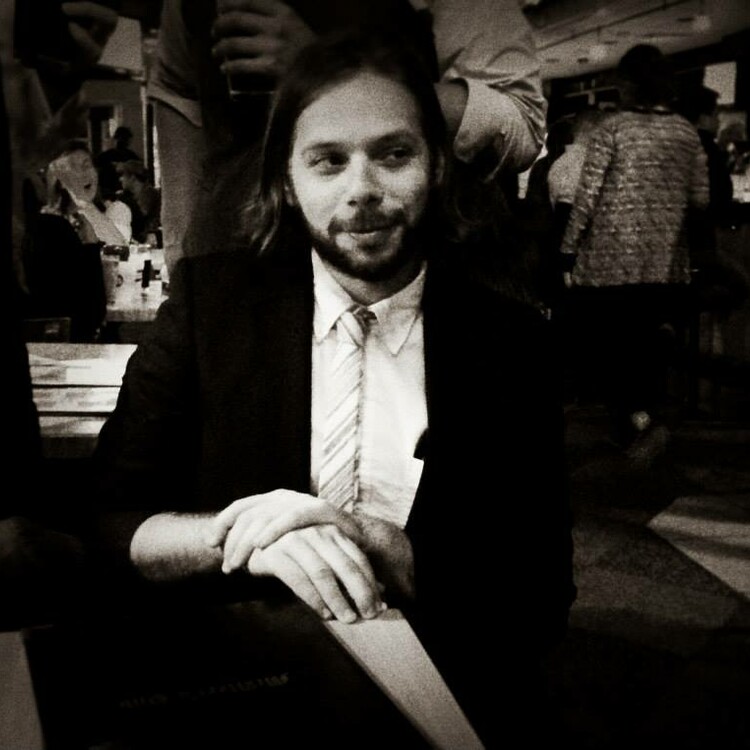 If you dig a rabbit hole all the way through to the center of Earth, and pop your head out in Australia, you might find a person doing the same stuff that you’re doing on the other side—a Bizarro Superman Seinfeld with eerily similar behaviors and tastes, mysteriously sexy foreign accents, and amazing recommendations on poetry and Techno.

I put this theory to the test during the summer of 2009 when I attended World Interplay, a now defunct international exchange program for playwrights under thirty in Cairns, Australia. That’s where I first met David Finnigan, a dude from Canberra, with whom I would eventually start an AustraliAmerican Theater Collective.

David Finnigan could’ve harvested my American organs on the Filipino or Australian black market and left me for dead innumerable times during the span of our eight-year transcontinental friendship. He could’ve slit my throat in England or Ireland, Canberra or Cairns, Malingap or Mapagkawanggawa and probably gotten away with it, but shockingly to my xenophobic paranoid suburban American Trumpisms, David is a stand up lad and a playwright just like me only wif a funny accent… and something called “Government Arts Funding?”

His new play Kill Climate Deniers is a satirical look at the collision between the unstoppable force that is anthropogenic climate change, and the immovable object that is Australian federal politics.

In 2014, Kill Climate Deniers received over $18,000 AUD in development funding from Arts ACT, the arts funding body for Australian Capital Territory. The funding was to undertake a two-week professional development workshop with five actors, a choreographer, a musician, and a designer. This was all a very big problem for Australia’s most read conservative commentator, Andrew Bolt.

Bolt attacked the as yet unproduced play on his blog: “How does the ACT Government justify spending taxpayers’ money on a theatre work entitled Kill Climate Deniers? What sane Government donates to a project urging others to kill fellow citizens, even as a ‘joke’? Are these people mad?”

Despite his comments, Bolt hasn’t actually read the play. If he ever does, he will find that Kill Climate Deniers doesn't advocate for the murder of those who deny the existence of global warming. Sure, on the surface, Kill Climate Deniers is a high-speed action drama in which an Australian minister for the environment goes Die Hard on a group of heavily armed eco-activists at a Fleetwood Mac concert. But much like our melting polar ice caps, there is a ton of substance beneath the surface. Finnigan uses the tropes and structure of a shoot-em-up action movie to present a researched and cogent argument about the politics of environmental policy and the science behind global warming.

Finnigan received hundreds of complaint emails and threats from conservatives. Surprisingly, many of these complaints came all the way from America. David received angry letters from climate change deniers in Iowa and Kansas, who were very upset about Australian arts funding.

After Bolt’s article, Finnigan and his collaborators received hundreds of complaint emails and threats from conservatives. Surprisingly, many of these complaints came all the way from America. David received angry letters from climate change deniers in Iowa and Kansas, who were very upset about Australian arts funding.

Amidst the controversy, Canberra conservative politician Brendan Smyth obediently followed Bolt's lead in condemning government funding for the script by inadvertently repeating the play’s opening dialogue, intended to be spoken by a generic politician character. Talk about art imitating life!

In American playwright terms: imagine a scenario where Bill O’Reilly writes an op-ed in the Washington Post condemning an unproduced play (which somehow received twenty grand in taxpayer dough from the NEA?). O’Reilly’s op-ed raises enough of a stink that a playwright with no agency representation gets called out by Eric Cantor, and starts receiving e-threats from a cabal of international conservative white dudes. That may seem like pretty bizarro scenario, but that’s basically what happened to David Finnigan in 2014.

Arts funding is a hot button topic in Australian politics right now, which is severely hurting possibilities for a premier production of Kill Climate Deniers.

In mid-2015, the Minister for the Arts, George Brandis, cut $104.7 million of the Australia Council's funding (to put this number into perspective, the entire budget of the NEA in 2015 was $146 million), and no major theatre company wants to risk getting “Bolted” by Andrew Bolt or his international followers. If you're a major theatre company trying to sell tickets, pay your artists, produce good work, and cover your costs, do you want to risk getting attacked by a noisy minority of bloggers with a lot of time on their hands?

“It was an interesting process, going through the play line by line with a lawyer and confirming that there was nothing defamatory or inciting in it. And in a way, having an aggressive minority try to shut the project down based on nothing more than hearsay and an automatic impulse towards outrage has ensured that I'm going to go ahead with seeking a production,” Finnigan confided to me in the summer of 2015 on the island of Camiguin, where our AustraliAmerican Theater Collective Everything Is Everywhere held a writers workshop in preparation for our performance at The Karnabal Festival in Manila.

Finnigan responded to the Kill Climate Deniers controversy by revising the script to include Andrew Bolt as a character, but as far as his plans for production, Finnigan told me via email:

Obviously our plans for a stage production needed a rethink after the burst of controversy. Normally I like to make a play over a long period of time, develop it in public, through a series of test performances and showings to different audiences. At each stage you refine and improve the play, until it's ready for a general release. Without a major theatre company backing us, we'd have to take each step slowly, and this is not a project I want to sit on for the next three years. I want it out in the world, soon, because the time for these conversations is now. But without funding to produce the full stage play in the way I imagined, I didn't want to compromise and do a half-baked, cheap production that didn't do justice to my vision or the importance of the topic. So instead, we decided to do two things:

1. Release the script as an illustrated e-book that anyone can buy and produce.

We'll release both of these things online in April, available to everyone around the world. That way everyone can experience the work directly and form their own opinion, rather than making up their mind based on rumor and hearsay.

As an American playwright, I have not yet had my work stir up conservative or congressional controversy, but during McCarthyism in the 50s, theatre artists like Elia Kazan and Arthur Miller faced blacklists and governmental tribunals scrutinizing and blocking their work.

In 2016, I’m sure Ted Cruz and Ben Carson have heard of Wicked and Book Of Mormon, but the probability that either man would publicly come out against an unproduced play by a unrepresented playwright seems pretty improbable.

This begs the question: Is this a failure on the part of playwrights or government? What happened in the last seventy years to make American playwrights lose their status as dangerous and worthy of governmental inquiry or acknowledgment? Have we dismantled the mechanism that would allow for a playwright to have an impact large enough to warrant a comment from congress? Have we stopped believing in the ability of theatre to affect public opinion or social change? Or is fear of art’s power to illicit social change exactly the thing that keeps our government from funding enough of it? Do we believe that artists should be paid a living wage? If so, should the federal government contribute? Or would more governmental intervention in the arts inevitably lead to the same catastrophic policy mistakes that caused the recession, the war in Iraq, and the continued plundering of our natural resources? In a hypothetical post-Trump America, doesn’t a Mccarthy-esque censorship tribunal for artists seem a lot more likely than an increase in National Endowment for the Arts spending to encourage new playwrights?

I asked David why he thinks the Australian government is more willing than America to reward artists:

This is a fascinating question, because growing up, it seemed like a natural part of the arts landscape. Why shouldn't taxpayer dollars go to support a nation's cultural expression? Isn't that one of the most vital parts of a society? But of course there's no history of arts funding in the Philippines at all (a place where David has an ongoing collaboration with Manila’s vibrant Sipat Lawin Ensemble), and unlike the USA, cultural product is not a major export. Some Asian artists have only had negative experiences with government involvement in the arts: censorship or outright closing down of theatres, no freedom of speech whatsoever. So it all exists on a spectrum, and in Australia I think we're fortunate to sit towards one end of that spectrum.

When arts funding is working, it helps to support the arts in regional communities, Indigenous artists, young people, people who don't have access to money or infrastructure.

I think one of the main values of arts funding is that it allows people to participate in the arts who otherwise would be unable. When it's working, it helps to support the arts in regional communities, Indigenous artists, young people, people who don't have access to money or infrastructure. Without that, the arts tend to get dominated by people who know people, who have money, who already have a voice in the system. My impression of the USA is that if you want to work professionally as an artist, there are only a very small number of cities where you can really hope to do so, and all of those cities are expensive to live in, which means artistic success is limited to people who are already somewhat financially affluent. Which limits the diversity of voices and ultimately makes for less interesting work.

Perhaps comparing America and Australia is somewhat unfair? After all, Australia’s population is 23.13 million (according to 2013 census data) compared to America’s 318.9 million (according to 2014 census data). But as the seemingly endless election circus rages on in 2016, I can’t help but think of my time down the rabbit hole and wonder if there is any possibility of making American arts funding and engagement seem less bizarro.