The Man Behind Scena Theatre

Four years ago, when I stumbled on Scena Theatre, I felt I had come upon a hidden treasure. By that time, I had lived in the D.C. area for twenty years but only knew the work of the bigger theatres. I had never run across Scena, in part because it’s not a theatre one can easily discover by driving or walking past; its name is not emblazoned on the side of a building because Scena doesn’t have its own space, but produces at Atlas Performing Arts Center and at the new Anacostia Playhouse. Scena Theatre is small but ambitious, and in spite of its relatively low profile, it has thrived in Washington for twenty-seven years.

Founding artistic director Robert McNamara is tenaciously committed to bringing new work from around the world to D.C. audiences. My first encounter with Scena’s work was a production of Conor McPherson’s The Weir—a subtly directed and memorable show. Young Finnish-Estonian playwright Sofie Oksanen’s Purge impressed me a month or so later. It was fresh, edgy, and riveting. The audience, too, was a departure from the norm, incorporating a large number of Finnish and Estonian embassy personnel, including ambassadors. In short order, I returned to see Steven Berkoff’s Greek. Walking a tightrope between beauty and profanity, in language by turns shocking and poetic; it was like nothing I had ever seen on a D.C. stage.

In the spirit of full disclosure, readers should know that I have volunteered from time to time at Scena, attending a literary committee meeting over a year ago and assisting the director during several rehearsals of Scena’s first Capital Fringe production. Because Scena’s work and McNamara’s work ethic have so impressed me, I asked McNamara to explain how it all started and why.

Patricia Davis: How did Scena Theatre come into being?

Robert McNamara: Amy Schmidt and I founded it in 1987 after long and careful thought. The theatre scene in D.C. was quite different then. There were no more than fourteen theatres and they weren’t doing international work. It was a conservative town back then. In 1987, our first season consisted of Help Wanted by Franz Xaver Kroetz, Endgame by Samuel Beckett, and Tropical Madness by Polish writer Stanisław Ignacy Witkiewicz.[caption] 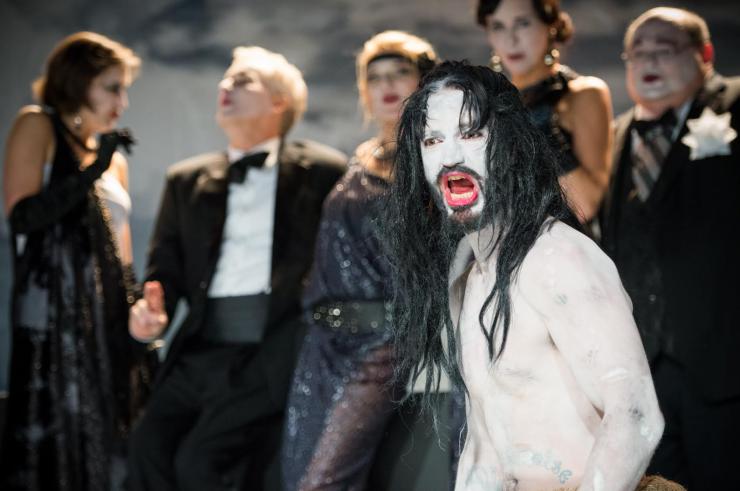 Patricia: What niche does Scena fill in Washington?

Robert: Scena brings new plays from around the world to the Washington stage that I am quite sure would never have been produced here. We do a lot of plays that no one would look at twice in the United States. It’s a way to find another Sartre, Camus, or Ionesco. Scena's mission is unique. We basically pioneered European and international work in Washington D.C.  While other local groups are now bringing international work to D.C., we also go on tour in Europe, representing both D.C. and our country at major international festivals and arts events.

Scena has introduced over twenty-five major international playwrights into the U.S., including: Suzanne Brøgger (Denmark), Drago Jančar (former Yugoslavia), and Theresia Walser (Germany). To my knowledge, no other theatre in Washington has pursued this course and committed themselves to developing and supporting new writing from outside the U.S. We seek out quality writing from around the world—from Australia to Denmark, to Germany and beyond.

Patricia: Is there any particular aesthetic you gravitate toward when selecting plays? What makes a play compelling to you?

Robert: It has to speak to me of its inner obsessions. Language is a key prerequisite. Writers from around the world excite my interest. I think I have a commitment to new European theatre that deals with issues that would be classed as distinctly "un-American" in tone, shape, and form. In other words I am looking constantly both for the "outsider" and the new emerging work.[caption] 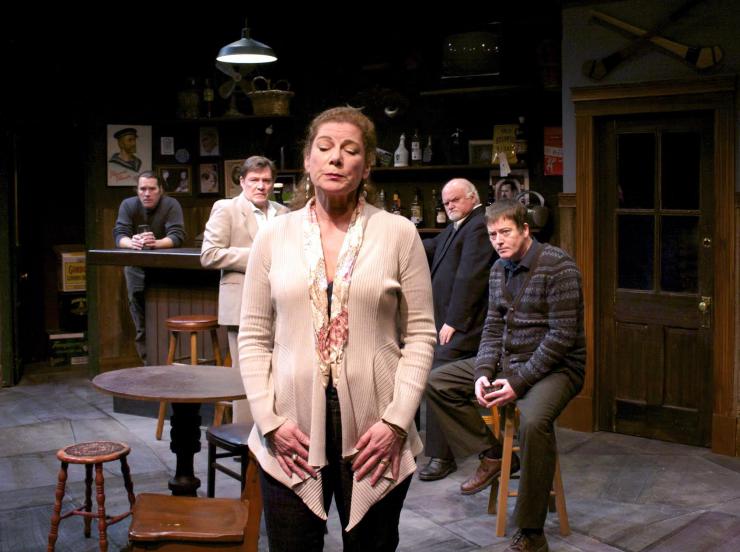 Patricia: Some of your world premieres have featured the work of American writers.

Robert: We did the world premiere of Charles Marowitz’s Silent Partners in 2005, which examines the relationship between Bertolt Brecht and his English-language translator, Eric Bentley. We’ve also done world premieres of plays by DC playwright Otho Eskin—Season in Hell, Eskin's play about French poet and iconoclast Arthur Rimbaud, and Eskin’s adaptation of Miss Julie, set in the Deep South.

Patricia: What are the most exciting projects you've worked on and why?

Robert: The Beckett Festival we mounted in 1990, in collaboration with the internationally renowned San Quentin Drama Workshop; Greek, by Steven Berkoff (which we staged in 1998 and in 2011); also, the first ever public reading/workshop of Samuel Beckett's first play, Eleutheria, in 1998 at the Embassy of France. Beckett's publisher, Barney Rossett, was there from New York City, plus people who'd known Beckett. It was a great night.

Also among the most exciting projects were the Scena Theatre tours to Yugoslavia (we played Stakeout at Godot's in Sarajevo in 1989) and tours to Berlin, Vienna, and Poland, where we did Ivona, Princess of Burgundia at a festival. We have these interesting contacts with artists and festivals around the world. We’ve been in combat zones during shows, the Balkans in ’95.

Recently, we’ve been reaching out to a lot of German-language writers. We were the only theatre in Washington this year doing anything on November 9 to mark the twenty-fifth anniversary of the fall of the Berlin Wall; we had a workshop production of Lydia Stryk’s Lady Lay. 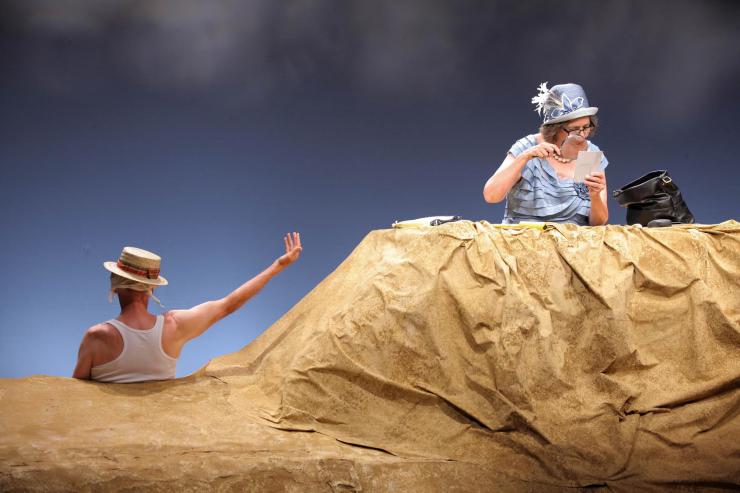 Patricia: You direct the shows at Scena, as well as directing the theatre. Often you have two shows running simultaneously. How do you manage to do it all?

Robert: I began in Ireland with Doug Kennedy as my partner and we had a three-play rep all the time. Really, it was a five-play season at Stage One (Dublin Stage One Theatre), so I was used to staging one and preparing another. It seemed like the natural thing to do.

Patricia: Why did you leave Dublin?

Robert: In the 1980s I left as a young director because I had hit a glass ceiling and wanted to grow and develop in a larger talent pool—the United States. Originally I had offers to stay on and direct in London at Foco Novo and other venues, but the lure of my home proved persuasive, and of New York. I wasn't happy with directing in the commercial system, and therefore Scena Theatre evolved.

I think I have a commitment to new European theatre that deals with issues that would  be classed as distinctly 'un-American'   in tone, shape, and form. In other words I am looking constantly both for the 'outsider'   and the new emerging work.

Patricia: You also act. Could you talk about that?

Robert: Yes. I began as an actor in D.C. and in Ireland. I've played Shakespeare, Beckett police detectives, Generals, murderers, priests, etc., in films, too. Most recently I acted in Report to an Academy by Kafka, directed by German director Gabriele Jakobi. This May we’re taking it to the Prague fringe festival, so I have the honor of returning to the stage in Europe. We’ll probably do it in Berlin, too. I'm also a writer—thirteen plays to date and several shorter pieces, including The Classics Made Easy, Little Criminals, Amelia (about Amelia Earhart), The Informer, and Saboteurs.[caption] 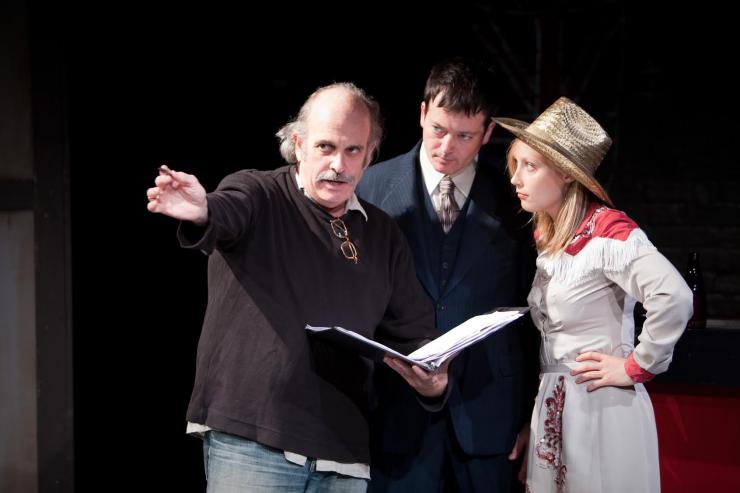 Robert:  We just finished Handbag, by Mark Ravenhill, who wrote Shopping and Fucking, which Scena originally staged in 2002.We’re doing a Scandinavian series, workshops of five new writers from Denmark, Norway, Sweden, Iceland, and Finland. Later in the season, we’ll do The Three Sisters, and the final show will be either an Irish Play or a new play by Norwegian writer Jon Fosse.

Photo 2: DC's Kerry Waters as "Valerie" with Eric Lucas and a trio of acclaimed actors from Ireland including Brian Mallon, Gordon Fulton, and Barry McEvoy in Conor McPherson's  The  Weir.   H Street Playhouse, 2011.

We are long time fans of Scena and the work of Robert McNamara. His Endgame was the best we have ever seen-better even than those in Dublin, London, etc. Thanks for the insights.

New Visions, Voices, and Perspectives in Theatre for Young Audiences