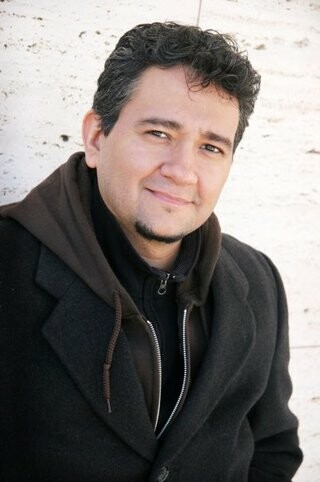 April 1978. It is a warm summer day in Barrio Logan, San Diego. My father and I are attending the annual Chicano Park Day celebration, and I am about to meet my godfather, Rodolfo “Corky” Gonzalez. My father has brought me to hear him speak at a rally that afternoon, and a crowd has gathered to take part in a grito that affirms this park as vital gathering place and instrumental part of this small, proud community.

There are moments when we share with the world who we are. I remember the moment when I told my parents that I was going to become a theater director. For them—and for many Latina/os who hope their children become doctors, lawyers, engineers—it was a moment filled with contradiction. As their child, they expressed their love and support for me, but deep down they felt a fear for my pursuit of this dream. And like all dreams, there is an intangibility that surrounds it.

We all wanted a sense of community. To feel connected to one another, to support each other’s endeavors

For me, the question was what kind of director did I want to be? For a few years, I had cofounded and run Chicano TheatreWorks, a college-based theater company that later became a not-for-profit. I was about to graduate and had come to a crossroads: stay and lead a new teatro for the central coast of California, or to find my artistic voice as a director?

The decision wasn’t easy. I had a company, but I also knew that I could only go so far in my work without further guidance and training. So I applied for graduate school. And in my interviews with programs across the country, I explicitly stated, “I am a Chicano director.”

The crowd waits with anticipation for Corky. He is a beloved figure in the Chicano community, a former boxer turned civil rights leader who founded the Crusade for Justice, a national movement dedicated to the empowerment of Chicanos, as well as fighting for higher educational access and opportunities.

In my hand is a silver pamphlet. It contains a poem written by Corky entitled, “I Am Joaquin,” and it was given to my parents as a baptismal gift from Corky. It is an epic poem that begins with:

I am Joaquín, lost in a world of confusion,

caught up in the whirl of a gringo society,

confused by the rules, scorned by attitudes,

suppressed by manipulation, and destroyed by modern society.

My fathers have lost the economic battle

and won the struggle of cultural survival.

And now! I must choose between the paradox of

victory of the spirit, despite physical hunger,

or to exist in the grasp of American social neurosis,

sterilization of the soul and a full stomach.

My proclamation as Chicano was met with blank stares or outright confusion. This was in the mid-nineties, and Chicanismo had already made its mark on Broadway with Luis Valdez’s Zoot Suit and writers like Eduardo Machado, María Irene Fornés, Cherríe Moraga, Migdalia Cruz, Edwin Sánchez, Caridad Svich, and Edit Villarreal had entered the mainstream. But for introductions at the group audition for Columbia University’s MFA directing program, the lead auditor asked everyone in the room how they identified themselves. English. French-Scottish. Hungarian. The replies of “ahs,” “ohs,” and nods came easily.

“I am Chicano,” I pronounced.

[The longest silence in the universe.]

“What is that?” the auditor replied.

Mind you. This is New York City, 1995. Cultural center of the universe. After the auditor answered, I looked around and I could tell that no one had ever heard the word “Chicano” before.

I am just eight years old, but in my imagination, Corky looms larger than life. He is not just a hero to everyone at the park that day. He’s my hero. I’ve been looking forward to this day all my young life. I’m nervous. I ask my father where he is. He says, “He’ll be here soon.”

And then I hear the announcement of his name. A loud applause erupts. He walks on stage. And I see him for the first time.

My name isn’t John, or Diane, or Will, or Susan. It’s Tlaloc. It’s not an easy name to read or pronounce. I began to imagine how folks in the regional theater take one look at my name and decide not to contact me because, well, if they can’t pronounce it then why make the effort.

My grandfather, before he died, told me that if I was to become an actor or director, I should my change name. “Like Richie Valens,” he said. “Or Martin Sheen.” He believed in assimilation. He changed his name from “Esteban” to “Steven.” But he was also born in the United States … Barrio Logan, San Diego to be exact. He grew up playing baseball with Ted Williams (yes, that Ted Williams), whose mother was from Mexico.

But one thing kept me from considering that name-change option: I loved my name. And I wanted to keep it for all to know and remember me by.

I am Cuauhtémoc, proud and noble,

leader of men, king of an empire civilized

beyond the dreams of the gachupín Cortés,

who also is the blood, the image of myself.

I am the Maya prince.

I am Nezahualcóyotl, great leader of the Chichimecas.

I am the sword and flame of Cortes the despot

And I am the eagle and serpent of of the Aztec civilization.

Email this Page
Share this Page on Facebook
Share this Page on Twitter
Print
Print this Page
Most Discussed
Every Production Is a Moonshot: Research on Improving Repertoire Selection
Kristin Patton, Nick Rabkin
Most Watched
International Presenting Now: Collaborative Models, Practices, and Pathways Toward a Sustainable Future
Monday 9 January 2023
Upcoming
Artists and Scholars Consider the Intersection of Puppetry with Other Disciplines and Ideas
Saturday 21 January and Saturday 28 January 2023
Newest First

The LTC announces they are now accepting applications for Colaboratorio, a series of learning opportunities to encourage authentic creative expressions and collaboration between Latinx designers and directors.