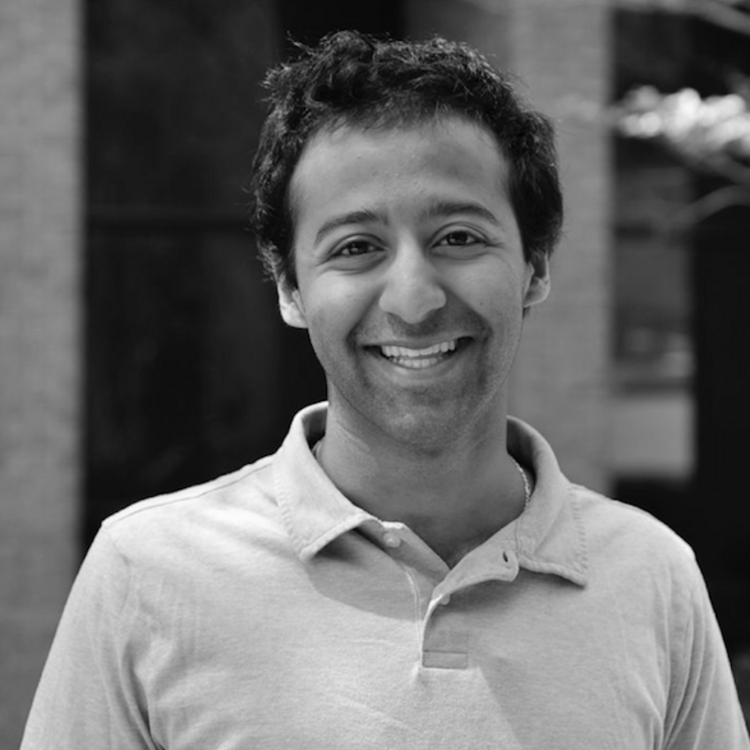 Performance Despite the Pandemic

Continuing to Create at the Intersection of Coronavirus, Crisis, and Care

How do we continue to create amid crisis? Over the past few weeks, this question has been on the hearts and minds of many theatre practitioners around the United States and other parts of the West, where theatre tends to rely on a privileged system of access to physical spaces, resources, and bodies. Ongoing responses to COVID-19 have complicated things, to say the least. Seasons are being cut short, gigs are being canceled, and Broadway has shut down. HowlRound’s recent discussions on ways of gathering and artists in a time of global pandemic attest to the uncertainty of the moment. And because of this uncertainty—at the same time that the United States continues on an outbreak trajectory matching the direst predictions by public health officials worldwide—it is not clear when or at what rate the situation will improve. We are left with playwright and poet Bertholt Brecht’s “dark times.”

But, of course, the concept that underpins theatre is possibility. (This is not to say that it is always positive possibility, but possibility nonetheless.) Such possibility has reasserted its relevance, not least in a recent writing, performance, and production experience I had with Washington, DC’s Convergence Theatre. At the exact same moment that the pandemic became real, the experience of moving my show, Snapshots, from physical to virtual space—resulting in a livestreamed performance on March 27 that was only available through HowlRound TV—can offer lessons for others struggling with similar challenges.

Snapshots is a play I wrote while living in the United Kingdom. It examines the intersection of Islam, sexuality, colonial history, and cultural appropriation. Snapshots was first written as a series of phone calls between four characters living and working in different parts of the world. The piece spun off from my involvement with Memories of Partition, a 2017 monologue-writing project with Manchester’s Royal Exchange Theatre (RET) about the legacy of the 1947 Independence and Partition of India. Through that project, Snapshots’ main character, Mustafa, came to life as a Muslim man of color questioning his sexuality while talking on the phone to his lover. The monologue was ultimately censored by RET for its strong language and sexual content. Convergence Theatre—a nomadic and multidisciplinary theatre collective with which I’ve been associated since 2015—has since become a home for the work, quickly adapting as the piece and everyday life have twisted and turned. Indeed, it is actually because of the pandemic that Snapshots has a significantly wider potential, reach, and impact than would otherwise have been the case. 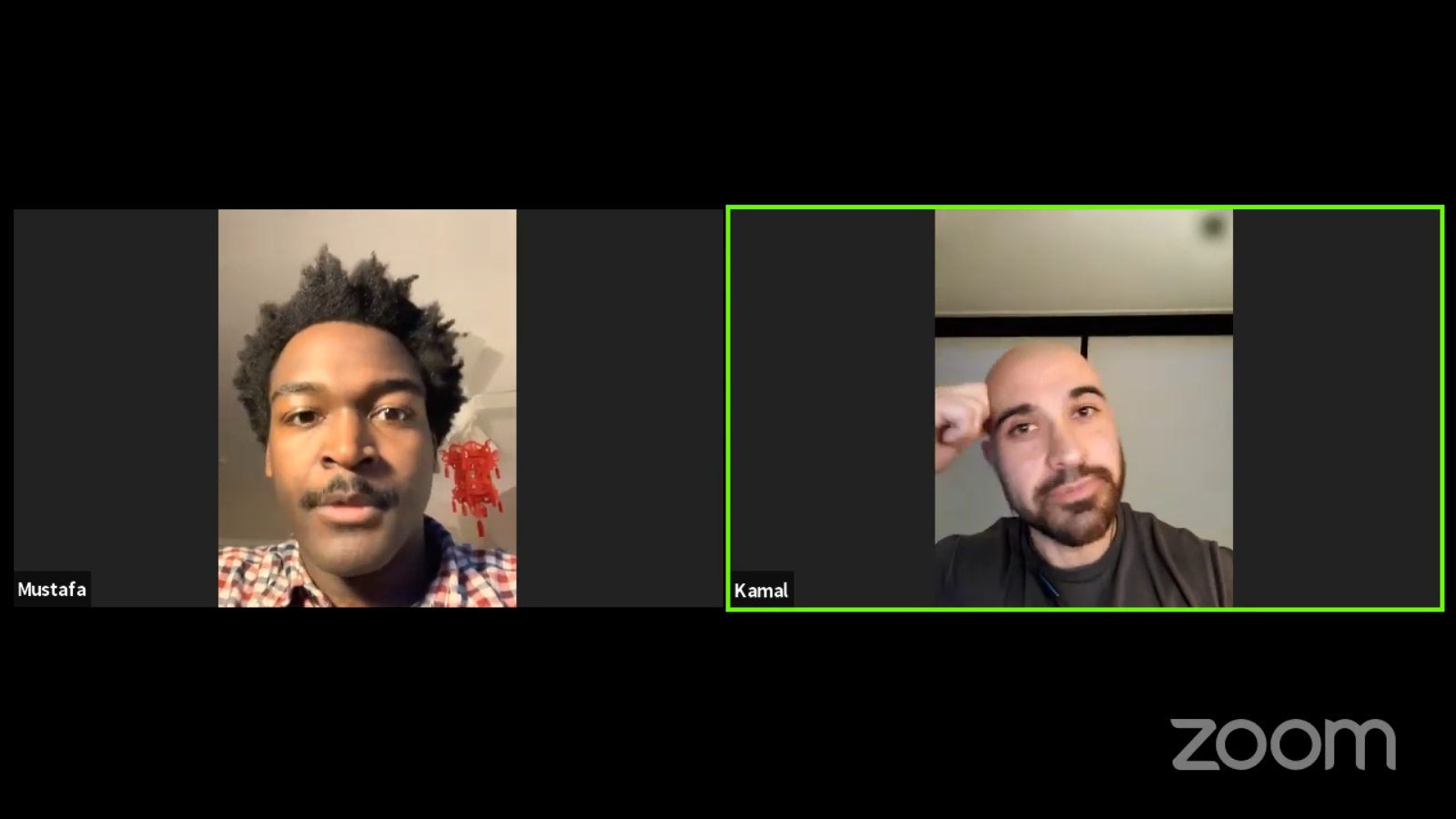 This particular development process began like many others. Drawing on my pre-existing relationship with Convergence, I submitted an early version of Snapshots to the collective’s Incubation Cycle for new work. All was going swimmingly—table reads, community reads, and staged excerpts—before the COVID-19 crisis became real. The World Health Organization’s declaration of the coronavirus as a pandemic came two days before Snapshots was due for a public reading, shutting down the venue for our show. We first moved to a backup location at a private residence, but even that seemed ill-advised as a national emergency was declared and local governments instituted increasingly restrictive emergency policies. The kicker, though, was personal: I live with my elders, as do some of the cast members. Social distancing thus became about much more than stopping the pandemic from getting worse for society at large. It became about care of those elders. Ultimately, it became about survival.

The decision to go digital, it turns out, actually served the work rather than simply accommodated our impaired ability to physically interact with one another.

As a result—and in consultation with Convergence’s artistic leadership, the project’s director, and the piece’s cast—Snapshots has become and continues to be entirely digital. To be clear, this was not simply a matter of swapping something embodied for something not. The piece was already written for a primarily virtual space, particularly in terms of its built-in phone calls that attend to questions of diaspora, disconnection, and distraction. The phone calls demonstrate how the characters are simultaneously attempting to juggle their work and personal lives alongside the technologically mediated nature of contemporary Western society. But rather than viewers watching phone calls taking place on stage, Snapshots is now performed online for a digital audience, with audiences looking in on video calls between characters while still being unable to participate in those calls themselves. Indeed, the switch from phone to video calls heightened the intimacy of the virtual performance space. The decision to go digital, it turns out, actually served the work rather than simply accommodated our impaired ability to physically interact with one another. 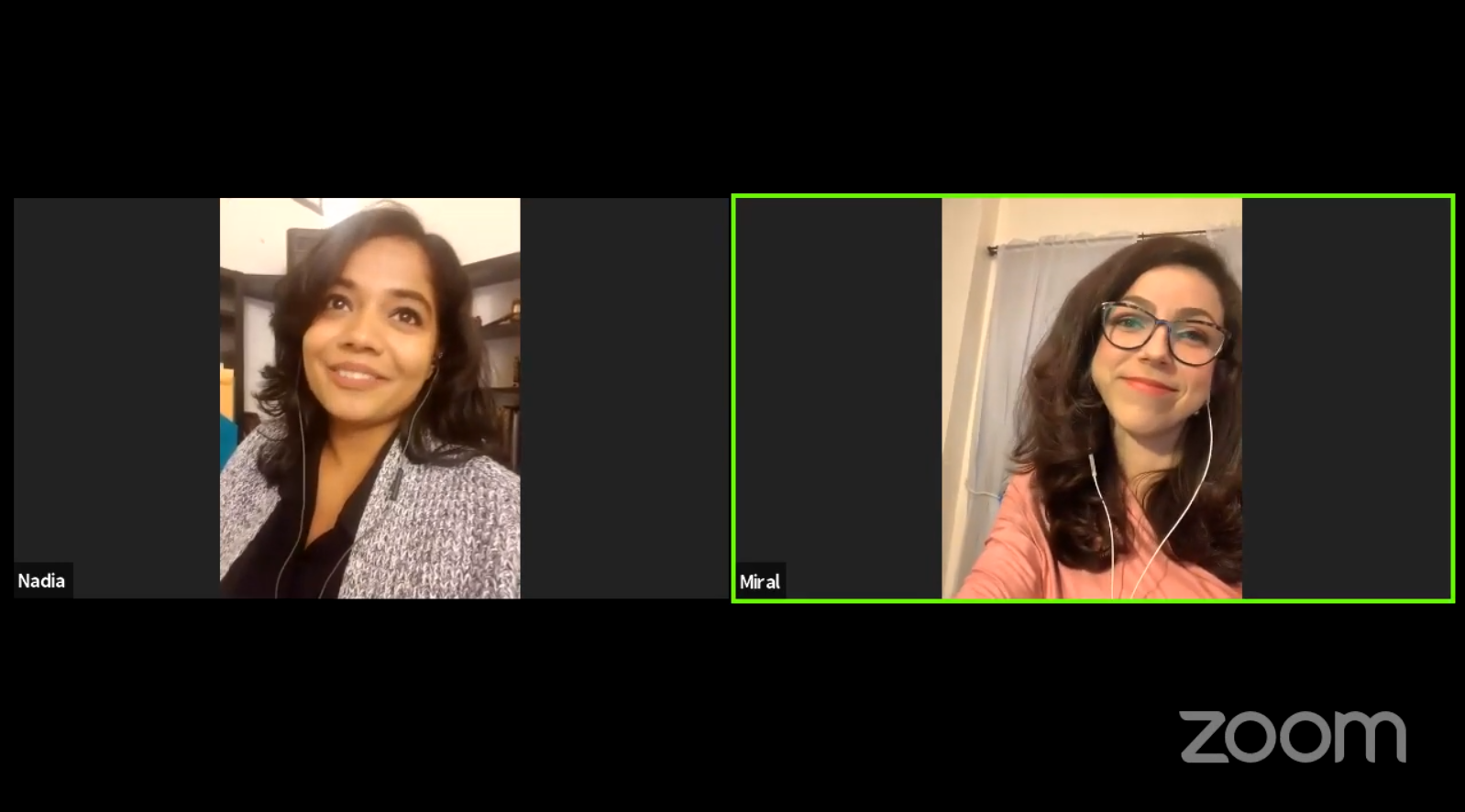 Rehearsals, too, went digital. The performers, director, and I all signed in to Zoom—the video conferencing tool that became our venue for rehearsal, tech, and performance all at once— from our phones and laptops. We experimented with different backgrounds, frames, levels, lighting, eye contact with camera, and more. The process recalled the challenges of adapting theatre for film—a common refrain in rehearsals was “this is so weird”—except none of us were ever in the same physical space, even up to and including our recent performance. That said, most of the current cast was involved in developing Snapshots physically and in an embodied way before the pandemic. That sense of ensemble and momentum cannot be understated.

Audience experience in virtual theatre is perhaps more central than is sometimes the case with Western proscenium theatre. For our performance of Snapshots, audiences logged in at the appropriate time, the virtual “doors” closed behind them, and a live event took place. The dozens of people who previously planned to attend the show in DC now became nearly four hundred watching it online all at once, creating a digital, transnational community from Berlin to Bamako, Sydney to Seattle. Folks from twelve countries and twenty-six states tuned in. Much of this had to do with the cast and creative team’s pre-existing transnational connections, but the extent of HowlRound’s reach, the show becoming free, and the dearth of other live theatrical programming at the time were also contributing factors. A “Converging Minds” post-show conversation on Zoom followed the event, engaging audience members in the issues and topics that were raised by the show rather than simply glorifying those performers who raised them. Participants were reticent to contribute at first, but readily offered questions and thoughts via Zoom’s chat feature so that they did not have to speak in a digital public.

In light of the pandemic, Western theatre is entering a moment of self-reckoning.

Audiences had differing relationships to the performance and each other, despite being members of a shared digital space. On the one hand, the possibility of staring into somebody else’s virtual life, as if a fly on the digital wall of a character’s confidential Zoom call, led some to describe the piece as borderline voyeuristic, while still creating immersion and being intimate. On the other hand, audience members did not rub shoulders with their seatmates or feel the plush of the cushion below them, even though many of them reported gathering family and loved ones close while attending the performance. Thus, the show ultimately was, and was not, in person. It was mediated by technology that immersed the audience in some space, between here and there. All the trappings of Western proscenium theatre were present, at once scripted and staged in terms of lighting, sound, set, text, body, and character. But so too were the possibilities of performance theorist Philip Auslander’s approach to “liveness,” maintaining the slips and mistakes and pauses and missteps that separate theatre from pre-recorded film or television while also recognizing our mediatized moment. In that mediatization, the possibility of connection despite contemporary precarity emerged. 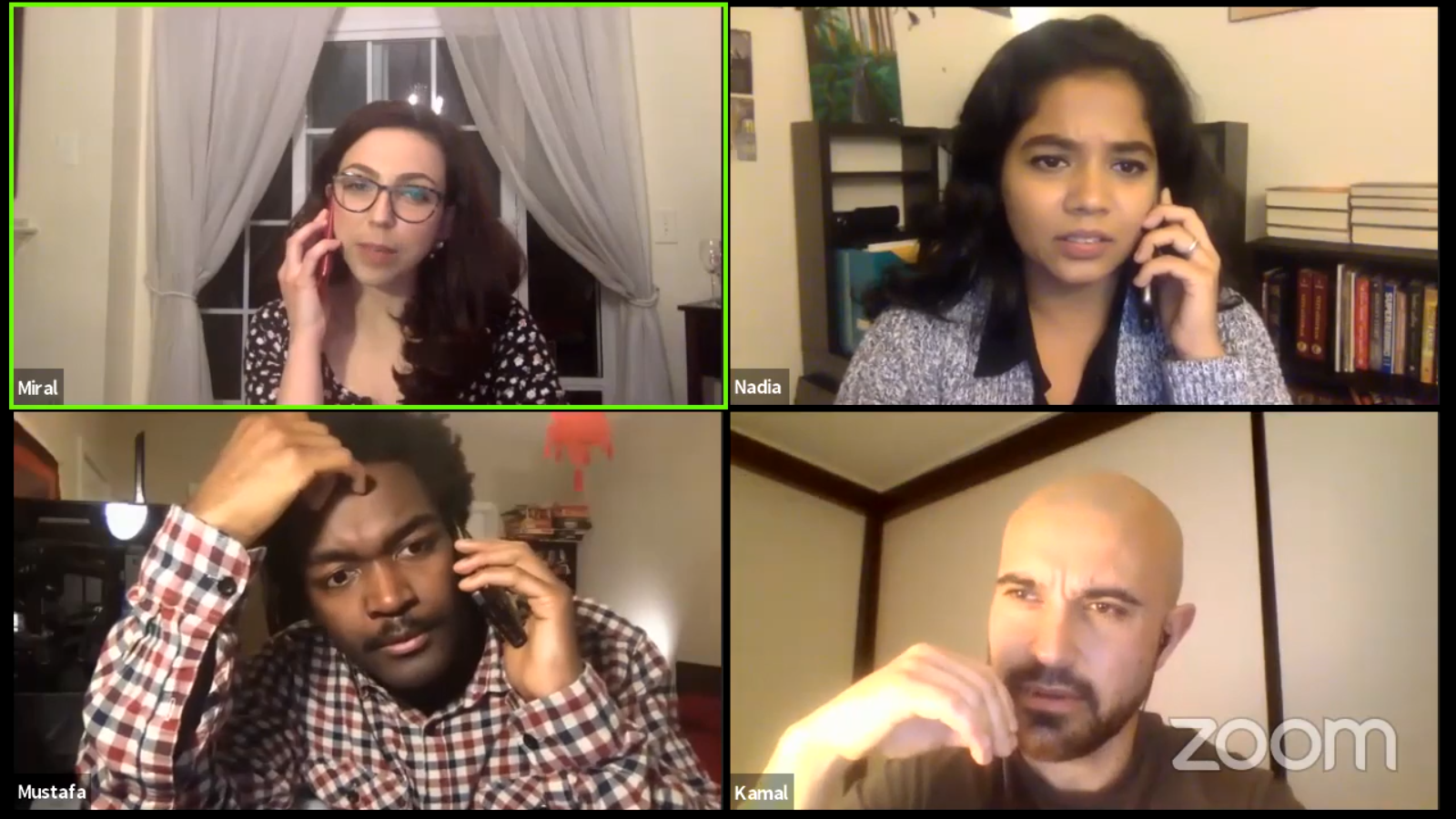 The cast of Snapshots. Photo by Asif Majid.

In light of the pandemic, Western theatre is entering a moment of self-reckoning. Bodies are not as accessible as they once were. The physical, so much at the heart of how Western theatre has functioned for many generations, is now at temporary remove. An argument could be made that the world’s physical needs matter more, that there is no way to make in this moment, that performance has no place in a pandemic. I refuse to believe in that negative possibility.

Creation can and must continue through the particular tools and technologies we have at our disposal; Snapshots is one example of how virtual theatre can function. Centering decisions of collaboration, creativity, and care when thinking about virtual theatre may heighten the social and global impact of our often-insular field—one that regularly finds itself speaking only to itself—through filling a social desire for art, attending to the energy of the pandemic moment, and departing from the convention of people coming to theatre rather than theatre going to people. Now, more than ever, we require performance that is intentionally intersectional, politically progressive, socially incisive, and globally accessible, lest we regress dangerously to Western theatre’s historically close-minded failure to adapt. One important way for our field to respond to the pandemic is through virtual theatre. The time to do so is now.