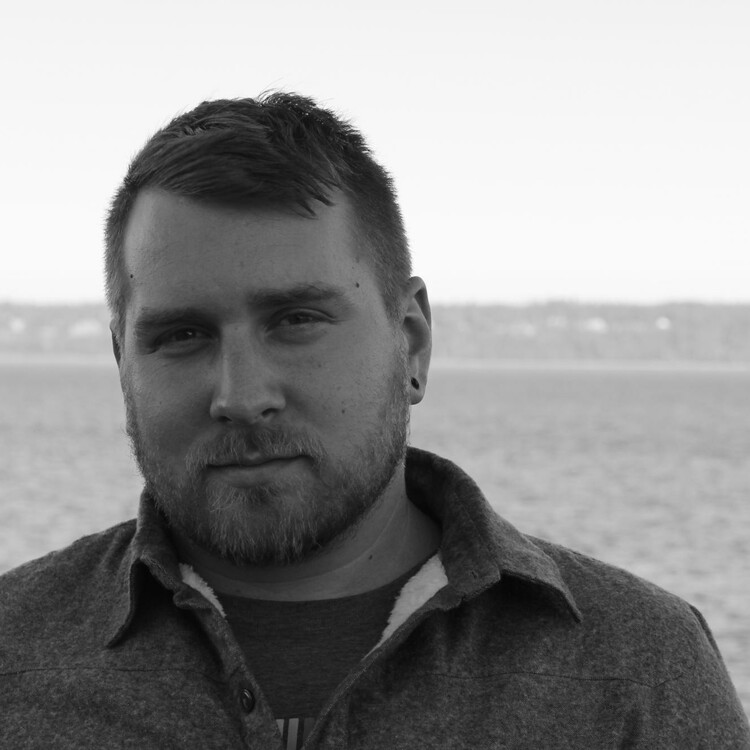 The Cost of Growing Up a Soldier

In the opening moments of Avishai Millstein’s translation of Heiner Müller’s adaptation of Sophocles’ Philoctetes, the cast, acknowledging the absurdity of the moment, offers the audience one final chance to leave the auditorium before the play begins, in the off chance any of us have been misled about what we are about to see. One man in the front row stands, begins to put on his coat, looks down at his companion, and thinks better of it. That, as Odysseus tells us, is the last truly comedic moment of the show. A moment, perhaps, of what Jordan Tannahill has asked us for, of potential failure—having surprised us in this fashion, both we the audience and they the actors can pop the bubble of “theatre” and get to work.

Wearing ill-fitting life-vests, and swaying back and forth at the lip of the stage, Odysseus and Neoptolemus debrief: who is Philoctetes, and why are they hunting him? Marooned for over ten years on the island of Lemnos with a foul, festering wound for company, Philoctetes is the Greek army’s only hope for victory—with his bow. Odysseus cannot approach Philoctetes because he advocated leaving Philoctetes behind. Enter Neoptolemus, the young son of Achilles—devoid of any political capital, and famously angry at Odysseus for stealing his father’s armor—who is the bait. Odysseus, who trained Neoptolemus in the proper words to say and which behaviors to perform, runs back to the ship, leaving Neoptolemus to face the madman with a bow.

As I watched this play, I couldn’t help but notice how the set and text contribute to creating a conversation about other interminable wars.

Full disclosure: I was recently discharged from the Israeli Defense Force (IDF). So, my eyes are primed to see references to military experience where others do not. As I watched this play, I couldn’t help but notice how the set and text contribute to creating a conversation about other interminable wars. Set on the island of Lemnos, the scenic design marries certain Grecian urges including: massive, collapsing statuary, and the sails and masts of sea-faring ships. There is also the contemporary detritus that even the smallest military outpost acquires: folding beach chairs, a television, a VCR. When Odysseus and Neoptolemus first land on the shore of Lemnos, the TV plays a looped recording of IDF soldiers on parade, and tanks in training drills. Odysseus brings out a handheld video recorder, which he attaches to the television, taking photographs PR professionals love to send out with their press releases. Later the camera passes to Neoptolemus, who records various scenes that are played for us both on the television and projected onto the sail of the ship.

This doubly-abandoned outpost brings to mind Beaufort, and the exhaustion of the heroes of the first Lebanon war, which stretched for eighteen years. Children like Neoptolemus were the war’s final participants; these strategic videos recall the unending and uneasy pseudo-war of the past twelve years— the Second Intifada; operations Cast Lead, Pillar of Cloud, and Protective Edge, collectively the Gazan wars; and the disastrous second Lebanon war.

As the putative hero, Philoctetes enters chained to the island by his rotted foot and a literal chain. Neoptolemus panics as a newly minted soldier entering a forward base with a veteran commander—nothing he does is right, and mistakes carry grave consequences for himself and others. It’s important for me to interject that Heiner Müller’s 1964 adaptation expunged the godly voice. The redemptive and pure nature of Neoptolemus, instead of redeeming his elders, is corrupted by the harsh moral and ethical demands of Philoctetes, and the wishy-washy political relativism of Odysseus. In the end, Neoptolemus kills Philoctetes, entering into a distrustful pact with Odysseus.

I don’t think Millstein foresaw what would happen in the Israeli political climate after June 2016. Yet, due to the rare nature of performances, current internal debates on politicians, heroes, and young soldiers, Philoctetes has become current and hyper-relevant.

Here, we see a world where the demands of politicians overcome an individual’s moral compass. When pushed further, Millstein’s television and camera apparatus provide a compelling and frightening overtone: at what cost does a nation at war create soldiers out of young men? How do soldiers become heroes? And how do political leaders use these soldiers as heroes? I am reminded of an experience I had shortly after being discharged: I mentioned a living friend of mine from basic training, who is, in my eyes a clear hero. A child who overheard me asked, “Oh, how did he die?” Within the military, we had all sorts of over-the-top names such as hero, general, master, and cannon. Yet, on the outside, I was reminded that the only true hero in this world is the one who can’t talk back.

Interestingly enough, the language of the play matches the tenor of Israeli society’s dialogue regarding the value of every soldier, as in Alterman’s “The Silver Platter.” Here, Neoptolemus is the naïve citizen, while Odysseus is the ultimate dissembling politician:

Neoptolemus: For us, every warrior who falls is a whole world. A whole world!
Odysseus: No one can really remember why this war even started—
Neoptolemus: Worse: no politician has a solution, or even hope!

Millstein’s production of Philoctetes is performed in repertory as a travelling production by the Khan Theatre, which produces a performance roughly once every six to eight weeks. Once a week or so, the show is mounted for various local municipalities around the country. I don’t think Millstein foresaw what would happen in the Israeli political climate after June 2016. Yet, due to the rare nature of performances, current internal debates on politicians, heroes, and young soldiers, Philoctetes has become current and hyper-relevant.

Last spring, a soldier by the name of El-Or Azaria was caught on film approaching an incapacitated (“neutralized”) Palestinian, who had attacked another soldier, and shot him from point-blank range in the head. This footage, and the ensuing series of hearings and trials, led to conversations on how the so-called “Rules of Engagement,” are practiced and enforced, and the question: what is the responsibility of the army to youths who are taken from high school and trained as soldiers? What relationship, if any, does the nation have with these soldiers, whilst they serve?

Gadi Eizenkot, Commander-in-Chief of the IDF, said this about the process: “when an 18 year-old man is drafted to the IDF, he becomes a soldier, and not ‘the nation’s child,’ and it falls upon him to offer his life in order to protect us.” Much like the Greeks and the Trojans, there is a failed agreement between the people and their state, and between the people and their military, especially today. There is a desire to protect every child, and to punish the heroes for willingly sacrificing the lives of other soldiers. But in Philoctetes, it is devastatingly clear that the politicians are not without blame.

Notably, in every version of Philoctetes produced onstage, the role of Neoptolemus is crucial. For Sophocles, Neoptolemus’ innocence and naïveté allow him to redeem Philoctetes and Odysseus. Then for Müller, Neoptolemus is compromised and subverted by the politics he attempts to alter. And for Millstein, it seems that Neoptolemus is the wielder of the camera, posting videos to YouTube or Facebook—videos that are endlessly edited and re-edited to confirm one position or story, and deny another.

Millstein may not have intended it, but in his production he asks us to consider the costs of raising children to serve in an army they are no longer sure they can trust. What does it do to the psyche to implicate death as a necessary step in the heroic process? What good are politicians if all they can do is think of their own skin, and wrap it up in the “good of the nation?” I don’t have the answers, and neither does Millstein. But still the questions need to be asked.