Legitimizing the Art of the Actor for 125 Years

The mandate to research, record, and archive the art of the actor has always framed the work of The Players, a club for actors and those who love them that has called a stately 1840s townhouse at 16 Gramercy Park South home since the club’s opening on December 31, 1888. After several decades of huge Victorian families and servants roaming the halls of this beautiful building, Edwin Booth, founding President of The Players remade the place. His vision? Upper floors housed quarters for Booth and guests, and lower floors featured an “actors club” replete with dining hall, performing and meeting spaces, and study areas.

Long tenures and traditions distinguish the place, from the presidents to the librarians. There were just four presidents between 1888, when Edwin Booth and colleagues established the club, and 1954, when Walter Hampden stepped down (the first President to step down before dying in office). A twenty-year presidential tenure ended a year ago amidst some turmoil. And the club’s century-old males-only rule was blasted open in 1989, inspired by a New York City ordinance more than unanimous member pressure. That year on Shakespeare’s birthday—traditionally the one day each year that women were welcome—the first thirty female members were installed with a cocktail reception, theatre event, and club dinner.

Current president Arthur Makar leads the social club and repository of American and British theatre history, memorabilia, and theatrical artifacts. Today’s club members are artists from theatre, film, television, music, and publishing, as well as patrons of the arts. The Great Hall hosts receptions, the Dining Room holds special events and performances on a small informal stage, and the basement Grill Room offers libations, simple fare, and camaraderie to members and their guests. 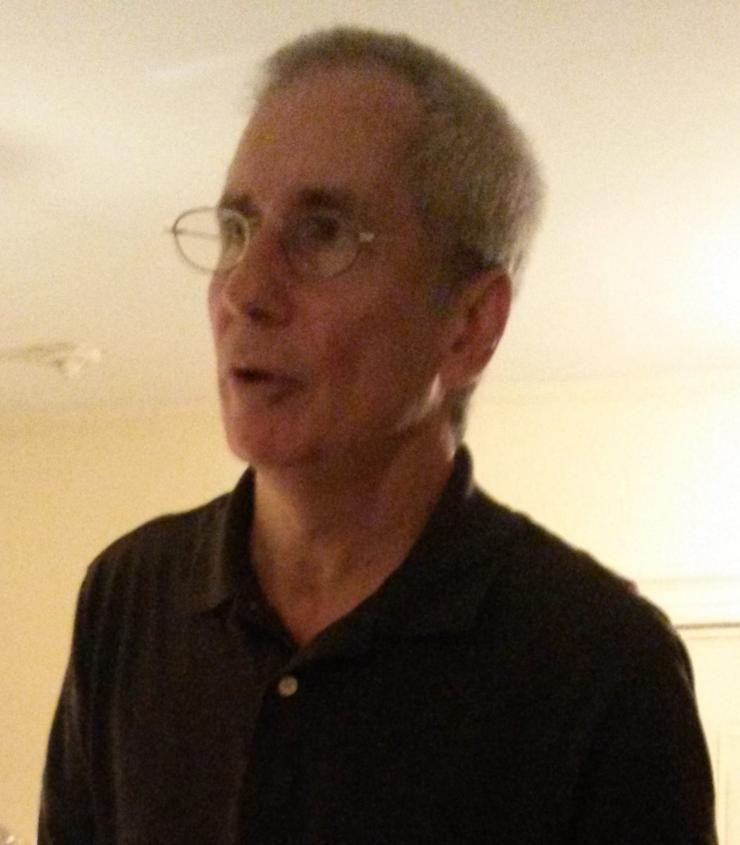 Raymond Wemmlinger is the current curator and librarian of the club’s Hampden-Booth Theatre Library, named for the collections of club presidents Walter Hampden and Edwin Booth that are the most extensive of the library’s holdings. The research mission he oversees today is totally in line with the club’s vision as articulated over 125 years ago:

First—To provide for social intercourse among the members of the dramatic profession, artists, and the patrons of art. Second—For the formation of a dramatic library and a house for dramatic records. Third—To collect historical data of the stage in general and of the American stage in particular. —“An Important New Club Founded by Managers, Actors, and Others,” New York Times, January 8, 1888

Wemmlinger clarifies that The Players consists of the club and The Players Foundation for Theatre Education, into which the finances and business of the library have been merged. The club owns the building, and co-owns the collection (paintings, artifacts, ephemera) with the Foundation. The art collection (excluding contents of the Booth Room, which are owned by the club) is under the care of the Foundation, whose nonprofit status allows for fundraising.

The research collections have been housed in several areas of the club building over the years. Now the second floor library primarily holds valued but replaceable items. Biographies and publications fill the shelves, and ephemera and theatre memorabilia of many varieties are on display to tempt interested general visitors and serious researchers alike. A small room abutting the library reading room was once the “conversation area” and then became an enclosed office, now bearing a plaque commemorating meetings in that location hosted by club member Francis Wilson that led to the founding of the Actors Equity Association. Public hallways are adorned with delights such as portraits (Katharine Hepburn, Rosemary Harris, Marian Seldes, Joseph Jefferson, and scores of their compatriots), stage costumes, and Tiffany glasswork in an interior window overlooking a lounge area. 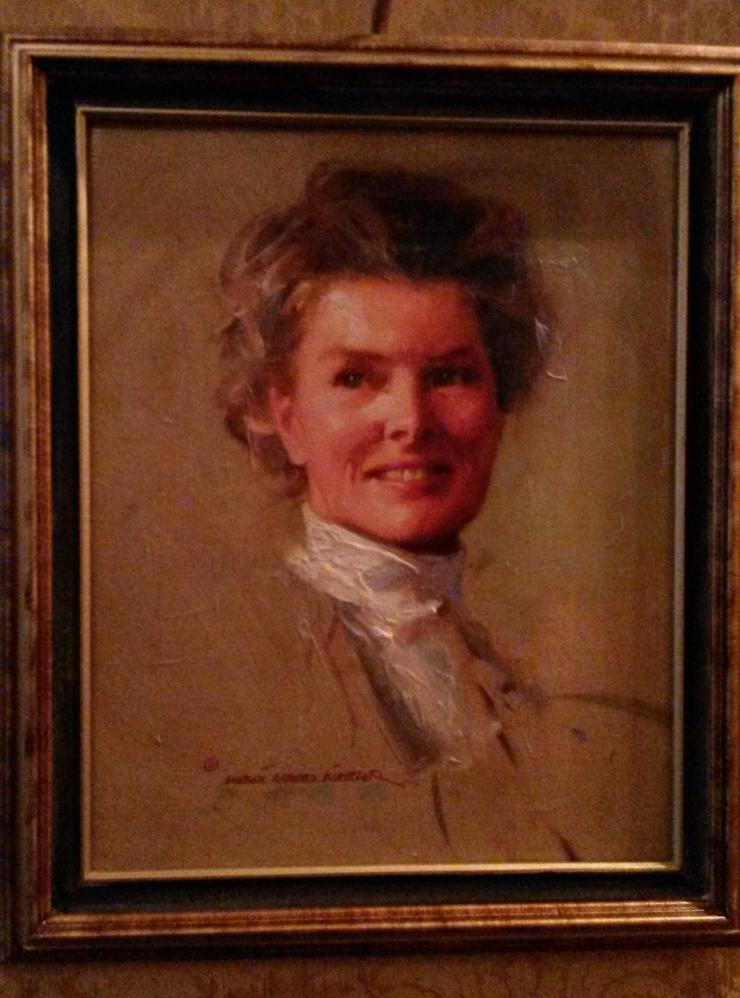 Wemmlinger recalls unsecured treasures early in his tenure in the 1980s. “We had a Shakespeare Second Folio on display in a cabinet in the back that was not even locked. We had lots of letters by Mark Twain and Walter Scott that I cannot leave out on display anymore.” These and other precious items now have been relocated upstairs. Though Wemmlinger notes, “You never really want an archive on the top floor because of the possibility of rain damage.” A bit of serendipity borne out of sturdy construction and airflow benefitted this relocation decision. “There’s no heat in these rooms other than what is provided by electric heaters. For about nine months out of the year, the way the heat rises in the building, the temperature stays in the range that we need for archival materials.” As any archivist will tell you, temperature regulation and maximum usable space for their collections are most important. 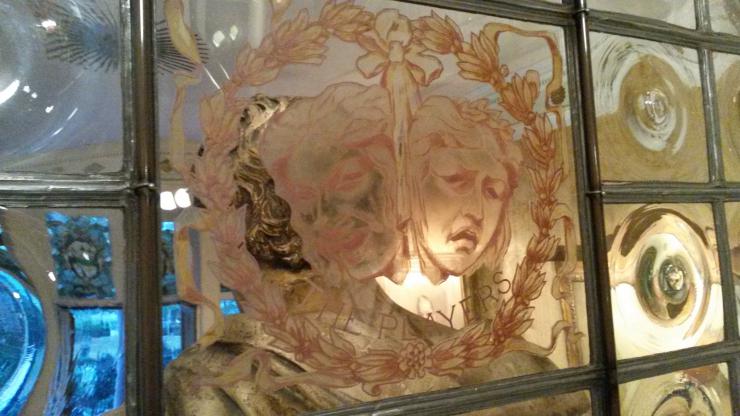 Tiffany glasswork at The Players[/caption]

The core collection is the Edwin Booth Collection—2000 letters, forty prompt books, and scrap books of his many tours. The Hampden collection inspired the creation of the research library that opened the club’s collections to non-member researchers for the first time. Hampden revived for a time the actor-manager tradition that thrived in the 19th century. Wemmlinger says,

He had his own company, traveled all over the United States, chose the plays, acted in the plays—he had complete artistic and commercial control. The actor-manager tradition was broken in this country around the first decade of the last century by the Syndicate, a monopoly of theatre owners that gained control of all the properties in the United States, and forced theatre people to work with them, pulling the commercial control away from the performers.

Hampden went to England to continue his training where the tradition was still alive, and he worked with an actor-manager named Frank Benson. “When he came back to this country, the syndicate had been broken, and he was able to revive this style. But he was seen as a man out of his time, even then.”

A number of additional collections all relate in some way to the 19th century, some of which are catalogued, indexed, and accessible via an online database. Other collections are not yet accessible through the database, but researchers come to the archives after learning about the resources through published articles, books, and references in performing arts resources. Records for Players revivals for limited Broadway runs between 1922 and 1933 reside in the archives—prompt books, playbills, outsized programs, clippings, and photographs by the White Studios. And member records in the “penthouse” storage room await indexing and cataloguing. Wemmlinger notes,

What I’m seeing now is this whole thing has to be completed as a collection because it’s an entire record of the life of this organization. The point of the Foundation is the history of the Players and the members, and the development of the Archive is what chronicles and supports that.

Collections among the archives can be idiosyncratic. For example, materials recently examined by a researcher interested in early 20th century burlesque performer John Callahan are left out for us to leaf through during our visit. Callahan was a non-member who left unusually complete records of his act to the archives of the club. Toward the end of his life, Callahan was working toward a comeback and worked with an assistant to type up and index all of over 200 of his skits and routines—invaluable records of burlesque style performance of that time. 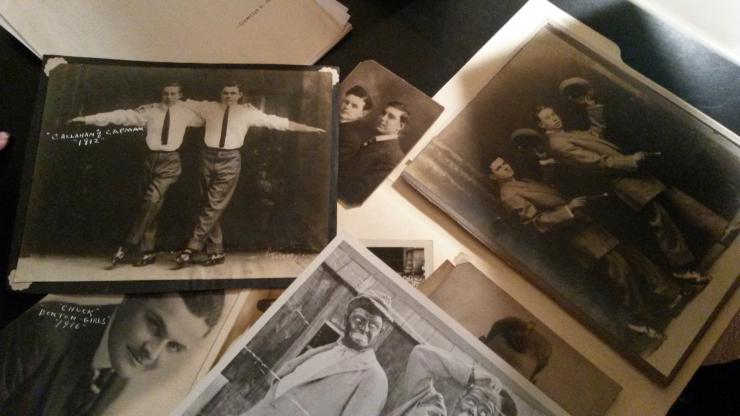 Photos from the John Callahan Collection[/caption]

The Players collections are stunning troves for archivists and dramaturgs and researchers and theatre-lovers of all stripes. While the Booth Room is held in abeyance awaiting fundraising to refurbish and restore, the archives and Collections are ready now as they have always been—to augment and illustrate a researcher’s theory, a story of a performer, a style, a theatre, a production, and the theatrical arts.

The Consciously-Embodied Art of Erica Fae

Erica Fae talks about her stage, television, and film career “embodying women who have come before and who have done incredible things.”