The Playwrights, Rewrites, Multiple Productions Series is a weekly series of interviews examining the process of developing a new play through a National New Play Network Rolling World Premiere as a part of their Continued Life of New Plays Fund. The series is curated by Thea Rodgers and Emma Weisberg. Visualizations are from HowlRound's community-powered New Play Map. 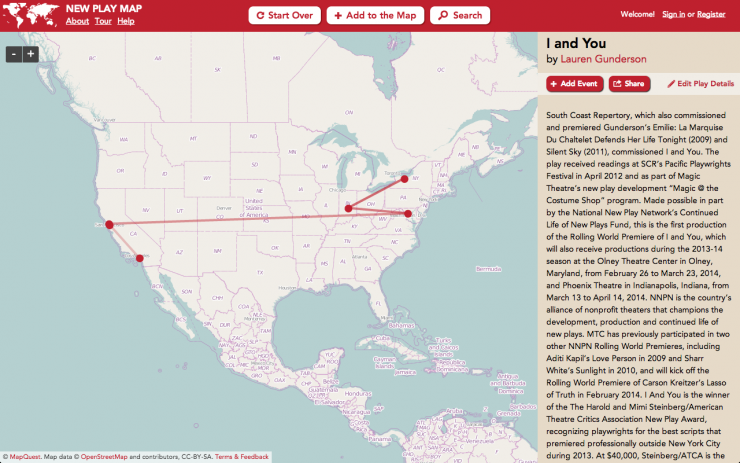 Click on the image above to see the journey of Lauren Gunderson's I and You on the New Play Map.

1. How did the different communities (creative team, location, audience) influence the development of I and You?
As it usually happens for me, the first full production of a new play influences and reimagines the play profoundly. For me, that happened at Marin Theatre, which was our first leg of the National New Play Network Rolling World Premiere (RWP). That process was thorough and productive with changes, new beats, and rearranged sections coming fast and furiously. It ended up a production of strength and grace that I was very proud of. We learned a ton during that rehearsal and production, so I arrived at Olney Theatre (our second stop on the RWP) with a lot of questions and rewrites in hand. Almost immediately following the Marin production, I was in discussions with Jason Loewith (Olney's artistic director) and Eleanor Holdridge (Olney's director for the play) about where we saw the play going and changing. Eleanor got to see the Marin production (directed by Sarah Rasmussen), so we had a built-in shared language from the first to the second production. But I approached the Olney rehearsal process exactly like the Marin process. Everything was on the table for discussion. We had new designers and actors so I could hear everything freshly. This was great but also hard, as it would have been nice to show up and change only a few commas. Alas, there was more to do. I was there for the first week of rehearsal and skyped back often as their production progressed. It proved to be a very productive process because I trusted Jason and Eleanor, and felt a part of the process even while living across the country.

2. Did you rewrite after the first premiere?
Very much. I always do. But what makes a RWP so essential is that I'm rewriting with a production in mind, not rewriting to lob the play into the ether and hope someone finds it. Again, I learn a ton from first productions and want to apply all of that to every production that follows. That's how you really make a play. There's only so far you can take a play in one production. We all know the feeling of being a week away from opening night and wishing you had another month to develop a scene, or add a character, or completely rethink the set. And the learning doesn't stop at opening night of the first production. I was absorbing reactions throughout the month of performances, talkbacks, and the general growth of the actors’ performances.

Logistically, the structure of the play was the exact same. What changed were moments of pacing, removing a few things that I finally had to admit were just never going to be funny, moving the first act break to a moment of connectedness instead of a moment of division, doing a whole pass that tracked technological references, removing a late-in-the-play speech that dragged, amping up their big argument in the third act, and making more reference to the physical manifestation of Caroline's illness.

3. What’s one valuable experience you had during the National New Play Network Rolling Premieres that made a significant impact on your process?
So many: moments of staging that made their way into the final script, great style, or lines that carried over from one production to the other. But one non-dramaturgical moment was in learning about how to talk about the play (as opposed to how to write or perform it). We learned that you don't want to talk about this play as a play about teenagers. It is, but that might make it sound like it's only for teenagers. It's for all of us; it's a mainstage play about defiance over death and love and mystery and mortality and hope and the small beauties that even one room in one house can hold. We also learned about how to talk about the underlying mystery in the play, and that it's okay to make some reference to it, to hint at the deeper undercurrent, to encourage the wonder.

That is one of the lessons I've passed on to every production that's come to me. It's so important because marketing defines how audiences will meet the play, and it needs to give this play its best chance of reaching the people who will find it meaningful.

I also wanted to aggregate ideas from production to production so I maintained a tumblr site for the play: iandyouplay.tumblr.com. This proved to be a great way to share reflections and revelations with other cities.

4. Freshly out of the last of three stops on the National New Play Network Rolling World Premiere, where is the play now? If still in development, where do you see it headed?
The play is now published (both in American Theatre Magazine's July/August issue and at Playscripts). The play had the incredible honor of being awarded the Harold and Mimi Steinberg/American Theatre Critics New Play Award this year, and was a finalist for the Susan Smith Blackburn Prize. I'm so pleased to say that the play will continue its life across the country with a bunch of upcoming productions. None of this would have happened without National New Play Network (NNPN) and the true commitment to play development. This play might have slipped off the radar without its NNPN Rolling World Premiere to support its necessary growth. I've said it before, so why not say it in writing: Rolling World Premieres are the best idea in American theater.