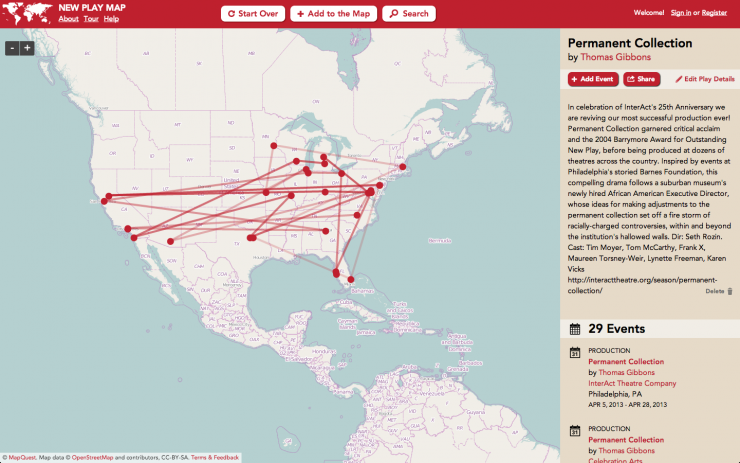 1. How did the different communities (creative team, location, audience) influence the development of the play?
Permanent Collection takes place in an art foundation, modeled on the Barnes Foundation in Philadelphia, which is renowned for its collection of Impressionist and post-Impressionist paintings. Before the first production of the play by InterAct Theatre in Philadelphia in 2003, the Barnes had been in the news continuously for several years: first, because of conflict between the Foundation and residents of its neighborhood, and second, because of the Foundation’s proposal to move to Philadelphia from its original location just outside the city, which led to years of costly litigation. InterAct’s production then dealt with a local story and received extensive publicity. We found that some audience members came in expecting to get the “backstage story”—that the play would be a documentary, essentially, rather than a meditation on the racial divide that drew on the history of the Barnes—which I renamed the Morris Foundation—but wasn’t bound by it. In contrast, audiences in other cities knew much less (or nothing at all) about the Barnes, had no preconceptions, and weren’t distracted by the question of whether the play was “true.” I felt that they perceived the themes of the play more clearly and responded to what was on stage, rather than what was in the news.

2. Did you rewrite after the first premiere? Second?
I’m very lucky to be playwright in residence at InterAct, and I develop my plays there over a couple of years through a series of in-house readings. By the time we went into rehearsal with Permanent Collection, I’d done six drafts and the script was pretty much set, at least in terms of structure. My tendency is to overwrite, to make connections explicit for the audience; rehearsal for me was a process of taking lines out to allow audiences to discover connections and resonances for themselves, to give the actors room, and to make the dialogue less predictable and spikier. I continued doing this after each subsequent premiere, and I didn’t feel the play was finished until the twelfth draft.

3. What’s one valuable experience you had during the rolling premieres that made a significant impact on your process?
My stage directions for Permanent Collection stipulate that the walls are covered with paintings. The first three theaters to stage the play took completely different design approaches to accomplish this. At InterAct, director Seth Rozin and designer Nick Embree used a combination of original paintings and reproductions to closely approximate the appearance of a Barnes Foundation gallery. At Florida Stage, director Bill Partlan and designer Kent Goetz chose to use not paintings, but frames filled with a reflective material. At Mixed Blood, director Warren Bowles and designer Kate Sutton-Johnson suggested the paintings with squares of multicolored light. I found all these approaches successful in different ways, and the experience changed my expectations for subsequent productions of Permanent Collection, as well as my later plays. I’ve become much more open to alternative approaches, surprising choices, and unexpected discoveries; in fact, I hope for them.

4. What was your experience as the first playwright working with NNPN on a Rolling World Premiere?
I had already worked with four of the five theaters on productions of my earlier play Bee-luther-hatchee. What made the NNPN Rolling World Premiere experience unique for me was that, for the first time in my career, I went into rehearsals at InterAct with the knowledge that four other productions were scheduled at Florida Stage, Kitchen Dog Theater, Mixed Blood Theatre, and Unicorn Theatre. No matter what the reviews in Philadelphia said, the play would have a future life. And, of course, the process of working with five different directors, casts, and design teams, seeing their differing approaches to the play and responding to their particular questions and ideas, was thrilling, stimulating, and challenging in equal measure. I was able to attend rehearsals, at least in part, for four of the five productions; consulted with all five theaters by phone or e-mail when I wasn’t present; and attended four of the five productions.

Since then the play has had an additional thirty productions at professional and university theaters, and I have no doubt that the attention generated by the NNPN Continued Life program led to many of those productions.