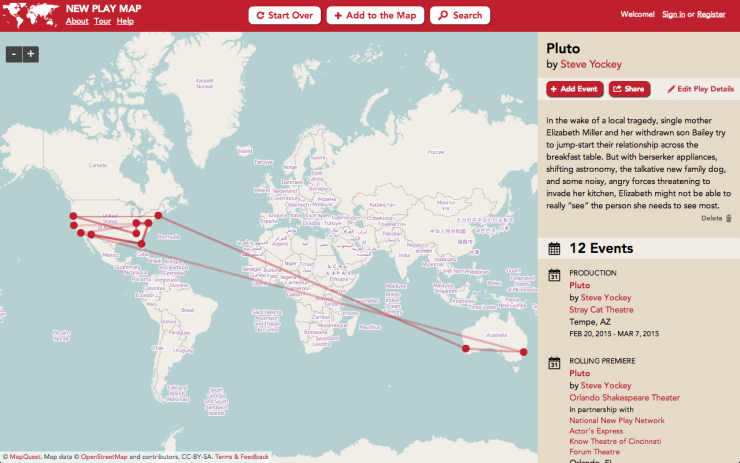 (Click on the image above to view the New Play Map journey of Pluto by Steve Yockey.)

1.  How did the different communities (creative team, location, audience) influence the development of Pluto and its all-too-relevant themes?
Despite some cosmetic/casting decisions, the productions were largely in the same vein. Without getting up on a soapbox, it's a very "American" play and touches on two things that exist beyond regional divides: mother/son family dynamics and the national conversation about guns. Even in more conservative areas, theater audiences inherently tilt towards the liberal side, so there wasn't much pushback on content. The devastating shootings in Newtown happened right after the National New Play Network showcase reading in December 2012 and a few interested theaters did quickly back away from the play. That's something I completely understand. As an artistic director you have to take care of your audience; you have a relationship with them and you know their temperature. For all of the thematic discussion that has swirled around the school shooting story elements, Pluto is ultimately a play about difficulty in communication, about how not talking to each other can result in tragic events on both an intimate and an epic level. How ignoring something, no matter how zealously, doesn't make it cease to exist. So by default, it's not an easy conversation to have with an audience—especially an audience that is bombarded by shootings on the evening news—and it's definitely not a play for everyone. It's odd. It's willfully unusual. But I was genuinely heartened by the critical response and consistently thoughtful emotional audience response, especially in very full, very engaged talkbacks in all four cities. 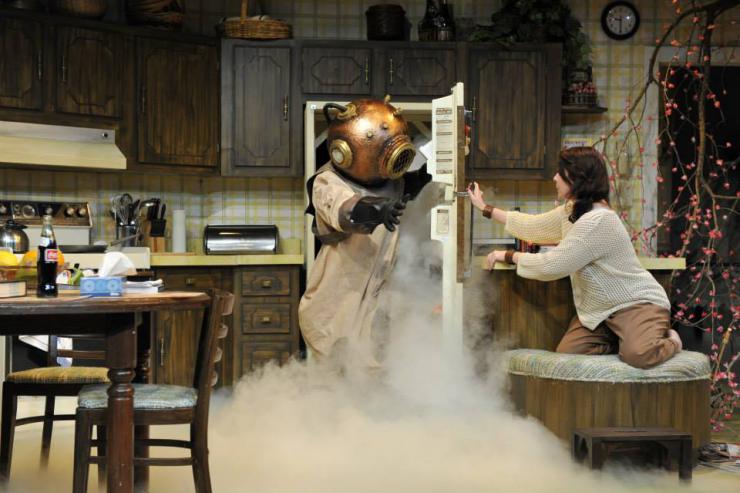 2.  Did you rewrite after the first premiere? Second?
I've been lucky enough to do a couple of these now and the first leg (primarily that first rehearsal process) of an National New Play Network Rolling World Premiere is always important in terms of really getting the play into shape. You learn a huge amount and the following legs benefit from that knowledge. In fact, it's really more of an avalanche in that each subsequent production benefits from all of the rehearsal processes and tech that have come before. Frankly, it’s a lot easier to take chances on new fixes or changes when you know future productions are locked in. For Pluto, I kept writing and adjusting all the way through the fourth production in Orlando. And I had a similar experience the season before with Wolves.

3.  What’s one valuable experience you had during the National New Play Network Rolling World Premieres that made a significant impact on your process?
Sort of touched on it above, but it's really the freedom to continue to work on the play and let people go out on a limb because a) you know you'll have chances to try a variety of different incarnations, and b) the nerves about future productions depending entirely on the success of this first one are wiped away. It just pushes all of the anxious noise into the background. And lot of times this idea of taking chances has much more to do with design choices and how things are realized that might seem tiny to other folks, but can really influence the storytelling. 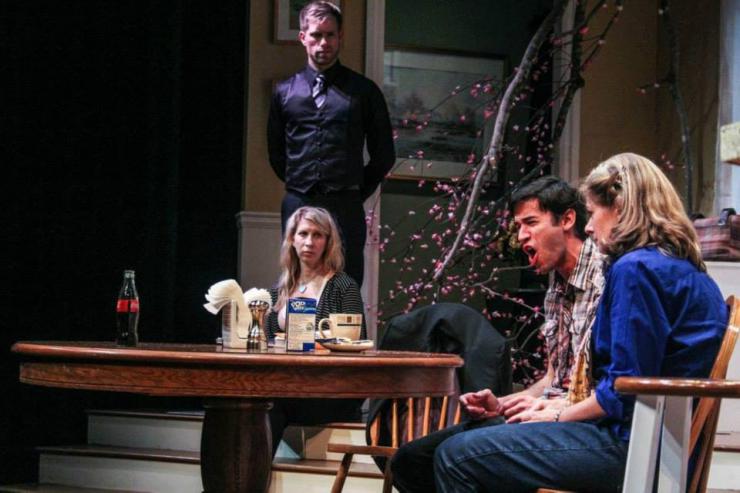 For example, in the final moments of Pluto, Cerberus—yes, the three headed dog—is left alone in the kitchen with a giant upside down tree. In the Washington DC production, the upside down cherry tree that invades the kitchen wasn't simply coming in through the ceiling as if it crashed there; it was a gorgeous, free-suspended floating full tree visible all the way up to the roots near the grid. It was remarkable, but my immediate concern was being able to see the end of the tree (as opposed to having the end obscured from view) would take away the "it goes on forever" quality of it, and make it feel like an abstraction that had been abstracted even further. That's something I have to watch out for a lot in my plays because I ask for some weird theatrical gestures: flooding, upside down trees, a giant clockwork doll, etc. But because I had already seen the "as written" incarnation work so well in Atlanta, I relaxed up a bit, took it in stride, then sat back and watched as Thomas Sowers, a stunning sound designer, incorporated the creaking branches and wood into the ethereal moments throughout the show, and then director Michael Dove and actress Kimberly Gilbert (as Cerberus) crafted a final moment for the play involving the tree, the visibility of the entire tree, and an powerful expression of the "movement" of grief through time. That's a moment I never would have been gifted with if I hadn't already seen it work the original way in Atlanta—it's now in the script.

4.  How did Pluto develop between the National Showcase and its National New Play Network Rolling World Premiere stops?
The week after the showcase, the Boston Court in Pasadena did a pretty fantastic public reading that resulted in some more adjustments. Then National New Play Network and Playwriting Australia sent Carson Kreitzer and me to Sydney and Perth that February as part of a playwriting exchange where I had the opportunity to work on the play in each city with two different casts. Lee Lewis from the Griffin Theatre directed the Sydney read at the National Institute of Dramatic Art (NIDA). In a very short amount of time, she gave me the courage to make a substantial cut/move right in the heart of the play that cleaned up a lot of lag time and misdirection. I then test drove those changes in Perth the next week at the National Play Festival and the resulting overall shape has held. As a side note: it was fascinating to see how the play landed with Australian audiences who don't experience/perceive gun violence in the same commonplace way we do in the US. When I came back, I did some more tightening on the script in the Oregon Shakespeare Festival’s Black Swan Lab and then it was time to dive into rehearsals for the first production at Actor's Express. So it was a pretty consistent development process across 2013.