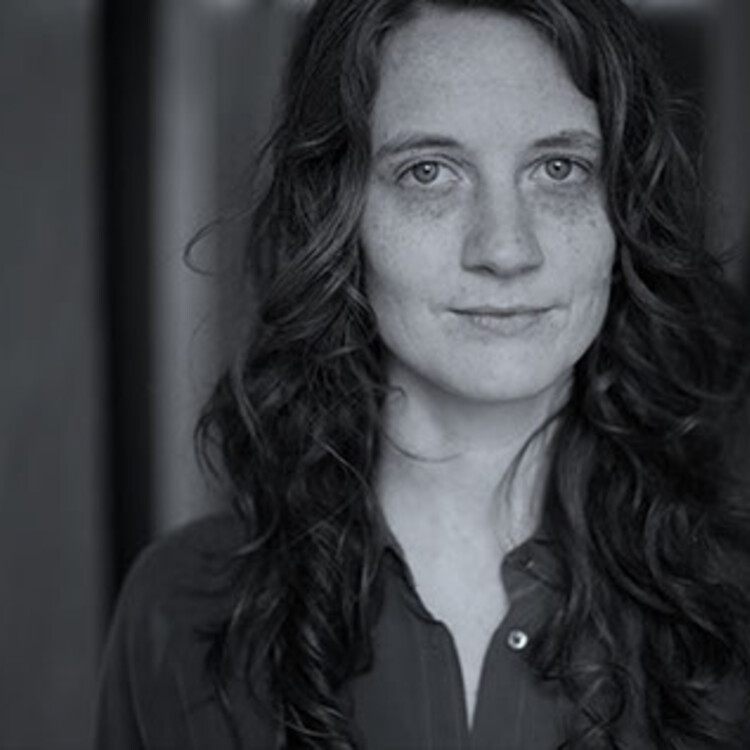 The Power of Transcripts

In July 2019, I sat down with a few people at the Immigrants’ Rights Clinic at Columbia Law School to discuss the possibility of bringing a performance of The Courtroom: a re-enactment of one woman’s deportation proceedings—a production by the New York City–based theatre company Waterwell, where I’m artistic director—to their campus. Fast forward thirty minutes and Elora Mukherjee—the director of the clinic, an immigration lawyer and professor—had our attention focused in a different direction.

Elora was describing her work as a monitor for the Flores Settlement Agreement—a court settlement that sets the time limit and conditions under which children can be held in immigration detention—over the past twelve years; two weeks earlier, she had provided testimony in front of the House Committee on Oversight and Reform about the deplorable conditions she and her colleagues had witnessed in two immigration detention facilities in Clint and Ursula, Texas. Then, Elora politely declined to bring The Courtroom to Columbia Law School—at least for the time being—and asked if Waterwell would consider making a new project using first-person testimonies of the children and young parents she had met at the border.

I’ll start at the beginning of our company’s engagement with immigration and then describe The Flores Exhibits—the project Waterwell created in response to this conversation with Elora Mukherjee. 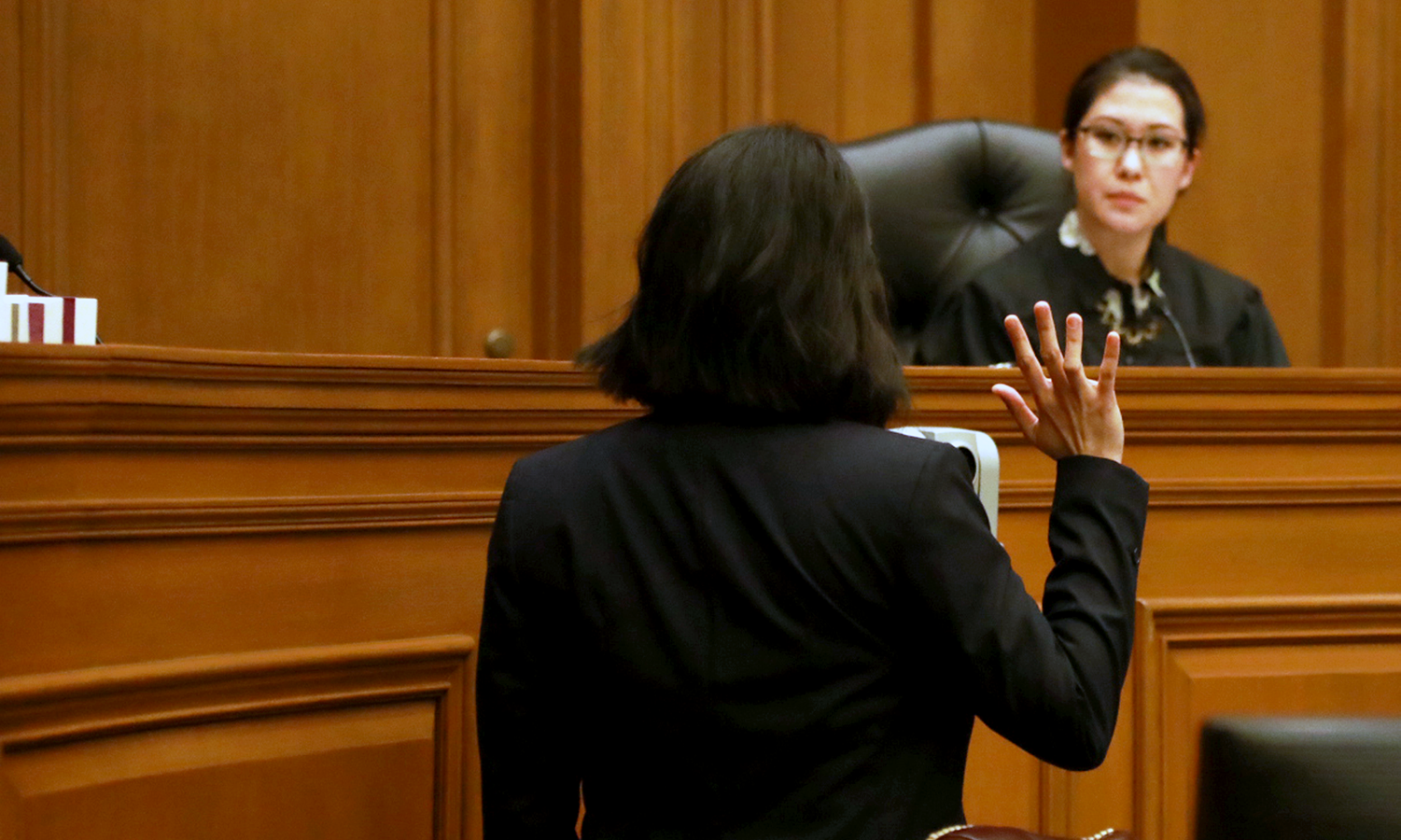 The Courtroom. Photo by Miguel Amortegui

In the summer of 2018, Arian Moayed—an actor, writer, director, and co-founder of Waterwell—was watching, along with the rest of the United States, as an increasingly heated debate about immigration enveloped our country. Family separations at the border and the uproar that followed flooded the news, along with stories about how increasingly rapid deportation proceedings were compromising due process. Arian was born in Iran, immigrated here when he was seven years old, and became a citizen when he was twenty-six. The stories of how the United States was treating immigrants hit him personally.

He thought: How can Waterwell respond? What can we do to add something meaningful to this conversation?

While reaching out to a handful of immigration lawyers and asking them to share transcripts of deportation proceedings, Arian met Richard Hanus, an immigration lawyer in Chicago, who has been practicing for over twenty-five years. Richard shared transcripts of one case he thought might be of interest, and Arian read it right away. The case was powerful.

The transcripts gave the story a certain kind of objectivity, an unvarnished truthfulness about immigration.

A few months later, I started as the newly appointed artistic director of Waterwell. Arian and I dove into these transcripts, did a rough edit of them, then another, then another, then an intense three-day text workshop with incredible actors, and came out with a script that had a three-act structure, with all the dialogue taken entirely from the court transcripts.

We asked Jeffrey S. Chase, a former immigration judge and widely respected leader in the field, to help us understand legal terms in the transcripts and to advise us on how to make most accurate representation of immigration court. He made a terrific recommendation: Go watch some proceedings.

We met at 26 Federal Plaza, went through the metal detectors, and headed up to the floors where proceedings take place. The courtrooms are small, with drop ceilings. There are no witness boxes and there is often no lawyer representing the immigrant—if you are an immigrant required to appear in immigration court, you don’t have automatic access to legal representation. This was not news to Arian, but for me, as a person born in the United States who had never interacted with the immigration system, I found it surprising and unsettling. Immigrants represent themselves, or pay not-unsubstantial sums to hire a lawyer. Non-profits and law school clinics step in to fill this gap, but they do not—and cannot—reach everyone.

Watching court proceedings—the combination of banal procedural details and life-and-death stakes—fundamentally shaped our thinking. What we witnessed was quiet, tense, tedious, disorienting. We knew that, for our performance, we’d have to risk recreating those very dynamics. It wouldn’t be quite a play but a reenactment. As we created The Courtroom, we focused on the small, regular mistakes shown in the transcripts—awkward phrasing of a thought, the quick mistaken use of a word—embracing them as interesting windows into how people function in court when they are prepared but don’t have a script, and set out to find real courtrooms to perform in. We created the original staging in our most hallowed venue: a grand courtroom on the seventeenth floor of the Thurgood Marshall United States Courthouse, the seat of the Second Circuit Court of Appeals. Though this prestigious courtroom was very different from small, plain immigration courts, the architecture taught us a lot about how courtrooms work. 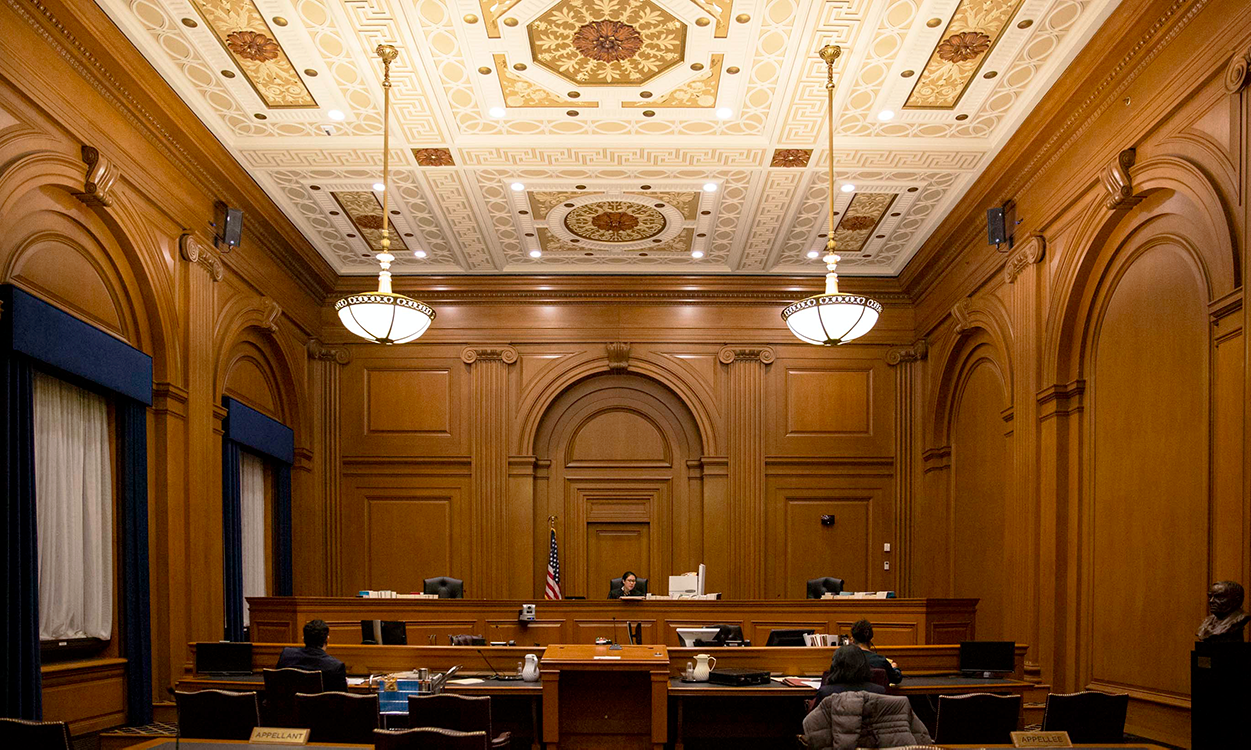 The Courtroom. Photo by Maria Baranova.

The transcripts we used to create the script were from the case of Elizabeth Keathley, an immigrant from the Philippines who came to the United States on a K3 visa after she married her husband, who was a United States citizen. After inadvertently registering to vote at the DMV in Bloomington, Illinois, receiving a voter registration card in the mail, and voting, Elizabeth had to appear in court for deportation hearings. She lost the first case, but her appeal was heard in the Seventh Circuit, where the federal judges ruled in her favor.

The first performances were terrifying. We had no idea if the piece would capture people’s interest and hold their attention. But we put our faith in how this case encapsulated the age-old adage about the personal and the political. Through this story about a married couple in the early stages of building their family, who had made one honest mistake that put the wife in danger of being deported, the audience got to see a portrait of our nation’s legal system that exposed its catastrophic flaws and showed its singular, profound potential.

We were floored by audiences’ responses to the performances and started to understand the real power of the transcripts.

The transcripts gave the story a certain kind of objectivity, an unvarnished truthfulness about immigration—a polarizing issue that seems relentlessly distorted when we encounter it in the media, something that is all the more painful because it is central to our country’s identity. Ali Noorani, director of the National Immigration Forum, put it perfectly in his book, There Goes the Neighborhood: “Immigration gets at the core of who we are, and who we want to be, as a country.”

The Courtroom gave audiences an opportunity to get closer to the immigration legal system’s inner workings. Not to be told what to think, not to be told again how bad things are, but to get closer to something true and real. It was our realization about the power of unaltered transcripts that guided us when we started to think about what to make in response to our conversation with Elora Mukherjee.

We told Elora we would think deeply about how we could make a meaningful project, and she said she’d send us the testimonies. We took the conversation with her very seriously, feeling a sincere responsibility as artists to take up the need she put before us but having very little idea what we could create in response.

I printed out everything Elora sent me and sat down to read the sixty-nine testimonies. I thought: Again, here is that combination of procedural banality alongside life-and-death stakes. It unnerved me. The project needed to capture that specific disorienting, haunting aspect of the testimonies. It wasn’t hard to recognize the power of each individual story, and the patterns revealed when reading two, three, ten testimonies were a disturbing depiction of how the protections outlined in the Flores Settlement Agreement (FSA) were being violated.

Here’s a quick history of the FSA and why it’s important: In 1985, a fifteen-year-old Salvadoran girl named Jenny Flores was held in substandard conditions in immigration detention for a prolonged period of time. Based on her experience, a number of legal organizations filed a lawsuit against the government, which in 1997 resulted in the Flores Settlement Agreement. This set standards for the treatment of unaccompanied children (anyone under the age of eighteen) while they are in detention, including requiring the government to provide reasonable standards of care as well as safe and sanitary living conditions, and to release minors without any unnecessary delay, setting a cap of twenty days.

It is often impossible for people held in detention to socially distance, and there are many reports that there is no access to soap or sanitizer in numerous facilities.

The sixty-nine testimonies that Elora gave us were exhibits filed by the National Youth Law Center in a temporary restraining order requesting emergency relief for minors held in Customs and Border Patrol facilities; the firsthand accounts demonstrated violations of the Flores Settlement. Wrenching news reports about children being held in detention facilities for extended period of times—sometimes in cages—without access to basic hygiene supplies and adequate nutrition or sleep were based on these lawyers’ experiences and these testimonies.

What could we create to respond? We wanted people to experience the testimonies in full. We wanted people outside of New York City, where we’re based, to hear them. We wanted to involve actors but also all the incredible people we’d met during the process of creating The Courtroom who were not actors: lawyers, former judges, immigrant-rights advocates, immigrants who are not in the arts, and playwrights, designers, and other artists invested in this issue.

The testimonies would be read in full, without any textual or cinematic editing. We would ask readers from different sectors of society to participate with the hope that it would demonstrate—in a quiet, un-didactic way—a wide-ranging solidarity and investment in the issue. Each reader would sit at a simple wooden table with a glass of clean water, which is often described in the testimonies as being hard for immigrants to get in detention. 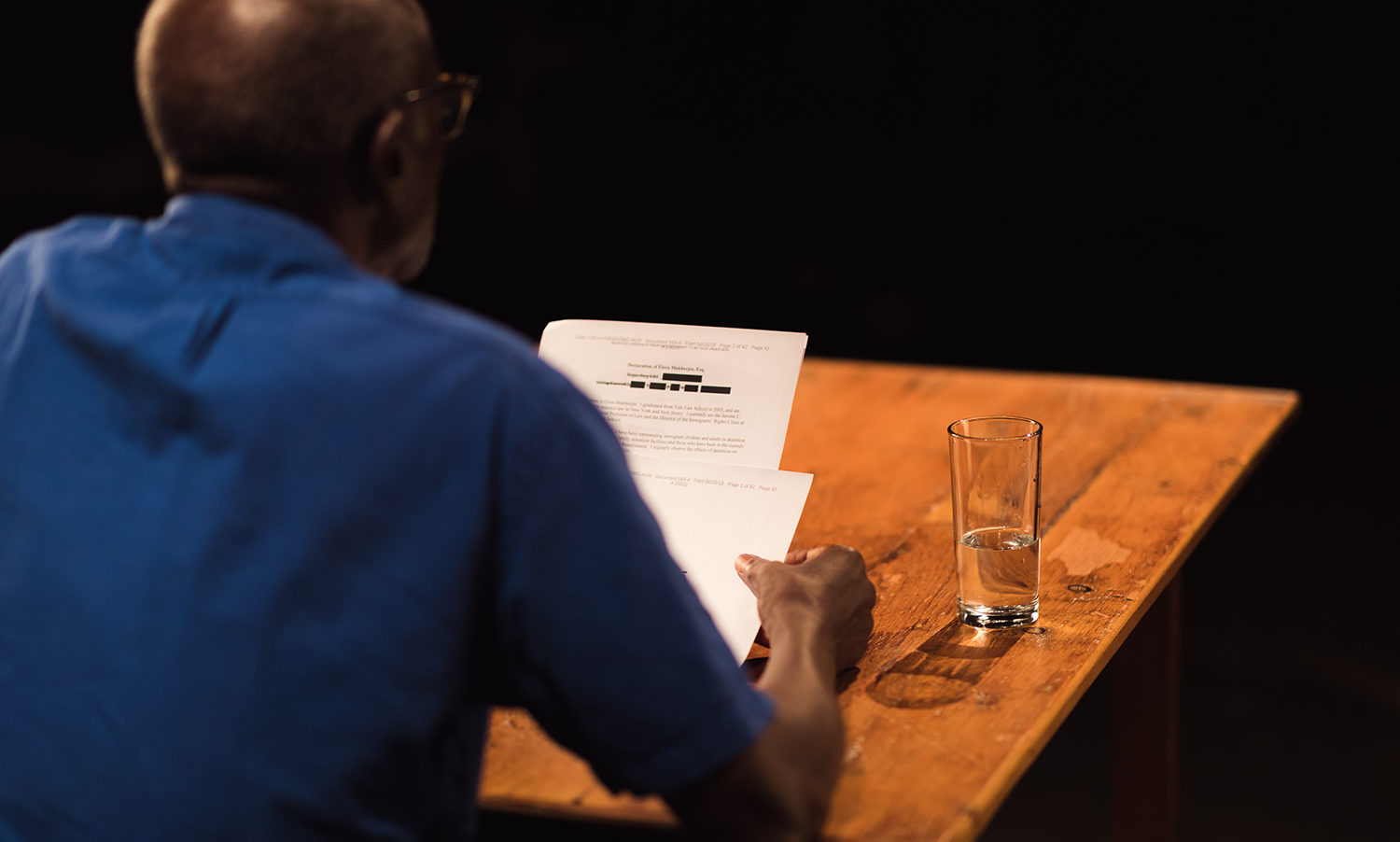 We wanted the readers to be good storytellers but I directed them not to take on any “character” they gleaned from the text or embody the experience described by the person who gave the testimony to the lawyers. We said the goal was for people to hear the words as clearly as possible—without emphasis, without dramatization.

To date, we have filmed forty-three out of the sixty-nine testimonies and are working to complete the filming of the remaining ones. This coming fall, we hope to instigate and facilitate live screenings of The Flores Exhibits around the country as a way to bolster support, organizing, and advocacy for the protections outlined in the Flores Settlement Agreement to be upheld and improved.

Right now, there are efforts around the country to decarcerate as many people held in jails, prisons, and detention facilities as possible due to the amplified dangers posed by COVID-19 to anyone in this kind of environment. It is often impossible for people held in detention to socially distance, and there are many reports that there is no access to soap or sanitizer in numerous facilities.

Using excerpts from videos in The Flores Exhibits, we released this ninety-second video connecting firsthand testimonies of people held in detention in June 2019 to the urgent need to get people out of detention during the COVID-19 pandemic.

If you are interested in getting involved, here are a few ways to start: