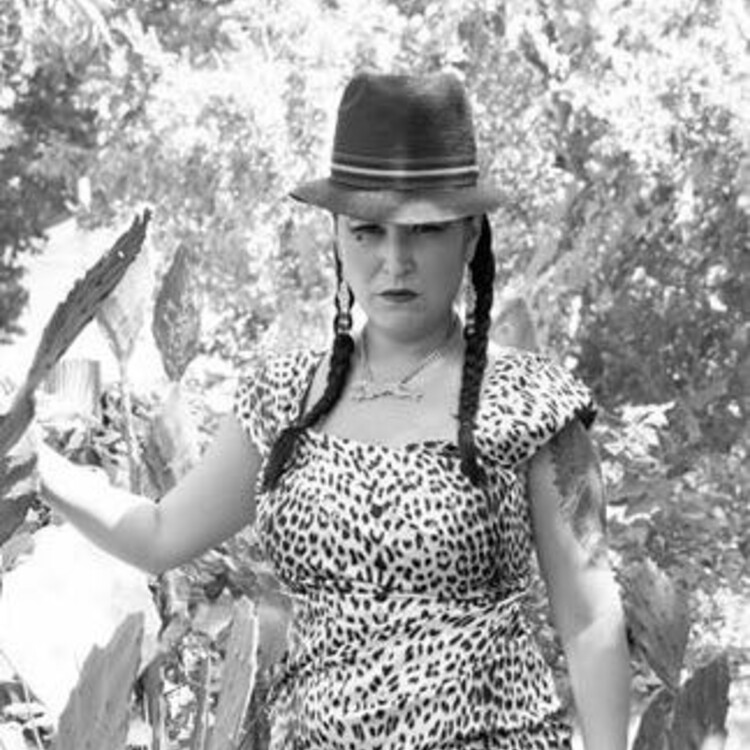 Marisela
Barrera
The State of Latina/o Theatre in Texas

Adriana Garcia is a direct descendant of Carpa Garcia, one of several traveling tent families that performed along the frontera frontier during the Mexican Revolution and thrived in San Antonio and the Southwest through the 1940's. She carries her family's rich teatro history through her current work in scenic design, painting, and writing. Her play, La Carpa Garcia, was given a fresh reading in May 2015 by Teatro Vivo in Austin, Texas. She also just completed the backdrop for my play, Cuero, La Ruby Red, y el Big Bird, at Jump-Start Performance Co. She is one of San Antonio's creative individuals that makes our teatro de aquellas. San Antonio teatristas are like family.

I recently sat at the Guadalupe Cultural Arts Center, the epicenter of contemporary San Antonio teatro history, with Jerry Ruiz, the new Executive Director, and Jorge Pina, former Theatre Director. Ay. I was in the middle of teatro past and teatro future. It was a trippy Chicano Christmas Carol in July.

Here's the evolution of contemporary teatro history at the Guadalupe in a flash: Carlos Morton worked as the first Theatre Director from about 1982 to 1983 while he was completing his graduate studies at the University of Texas at Austin. The commute was tough, and he went the way of many of our teatristas—to California. Thankfully, once you become part of the San Antonio teatro family, you always come back—Dr. Morton paid the San Antonio Latino/a Theatre Alliance (SALTA) a visit this past spring, when we partnered with Northwest Vista College to offer a playwriting workshop for students and community.

Enter Jorge Pina. He was traveling throughout the country performing teatro, and in 1977 he met his fate: Ruby Nelda Perez. They married in Cuba in 1981. Jorge began work as Theatre Director on January 20, 1984 and gave sixteen years and over fifty teatro productions to the Guadalupe. He and Ruby are teatro royalty in San Antonio.

I joined the San Antonio teatro family as Theatre Director at the Guadalupe Cultural Arts Center on April 15, 2002. It's funny how both Jorge and I remember the exact day we started work. I dug into the Guadalupe's script archives and read through production manuscripts: La Victima, Petra's Pecado, Amor de Hija, and Lydia Mendoza, plays that had been produced over Jorge's tenure. My work at the center lasted almost five years before I decided to move on.

There is a new Executive Director at the Chicano Arts Camelot now and he is a teatrista.

We want more plays produced by and about people of color, in theatres across the city. We want a professional theatre training program. We want radical hospitality, so that theatre is accessible to all.

Jerry Ruiz was an intern at the Dallas Theatre Center when we first met. He is from Brownsville, Texas, so coming to work for the Guadalupe is like a homecoming. He has a MFA in Directing from University of California San Diego, but cut his teeth in New York City with the Texicans in Nueva York, theatre folks with Rio Grande Valley connections like Mando Alvarado, Raul Castillo, Tanya Saracho, and Raul Abrego. Jerry is committed to supporting teatro en San Antonio. He wants to focus on living Latino/a playwrights that have a Texas connection and provide resources for local artists.

Already, there is action. The Guadalupe will collaborate with the San Antonio Latino/a Theatre Alliance to produce one of the featured playwrights from the Latina/o Theatre Commons Carnaval of New Latina/o Work. Together, we join over fifteen other professional theatres from across the United States to support new Latina/o works for the stage. We look forward to this production happening over the next two years. Additionally, Joel Settles, co-founder of SALTA, is the new Performing Arts Director at the Guadalupe. Last weekend he produced “Summer Teatro Shorts Showcase” featuring the work of three local playwrights and performance groups.

The Guadalupe is not the only hub of teatro activity in San Antonio. Although our community is small, productions are growing more frequent with the addition of city funding for independent artists. Our cultural organizations are evolving, and teatro is on their radar. Things are looking better, but there is still work to do.

Vicki Grise, an award-winning playwright and theatre-maker from San Antonio, recently hosted a visioning session with local teatristas. When she issued a call for local San Antonio theatre and performance gente to gather for a conversation, she included this description for the event: “Part writing workshop/Part dinner party/Part rehearsal for dialogue.” We met at Galeria E.V.A, a community art space run by Veronica Castillo, a 2013 NEA National Heritage Fellow.

Amid the food and the wine, the dreaming was delicious and documented: San Antonio teatristas dream about building a shared performance and rehearsal space. We dream about more grants for individuals and independent collectives. We want a festival of new works. We want a Latina/o theatre arts incubator funded through public dollars. We want more resources committed to arts education in our public schools. We want to experiment with new technologies in performance. We want more plays produced by and about people of color, in theatres across the city. We want a professional theatre training program. We want radical hospitality, so that theatre is accessible to all.

San Anto is dreaming, and we are putting out teatro dreams to action.

This is inspiring in so many ways - I love the use of "radical hospitality"; this not only makes theater more accessible, but builds empathy among eve

This is inspiring in so many ways - I love the use of "radical hospitality"; this not only makes theater more accessible, but builds empathy among even strangers. Thank you for this.

Thank you for writing this!

Tocaya, exciting to hear what San Antonio teatristas have in the works!

Que bien hecho, Mari! I think this piece pairs well with Joann Farias' "Why Write Chicano?" http://howlround.com/why-wr... and Roxanne Schroeder-Arce's piece on Latin@ TYA http://howlround.com/young-... We need more Latin@ stories on our stages (not to mention actors, directors, dramaturgs, etc.), especially is places like San Antonio with such an underappreciated and storied history of Latin@ performing arts.