No Screaming Matches, No Riot Police

Minutes before going in to teach my first Script Analysis class, with butterflies in my stomach, new to this university, new to this community, I was troubled by the predictable hustle-and-bustle of a new school year—business as usual. I was struck by how easily we move on with our own lives without acknowledging loss and turmoil elsewhere. In this case, though my feet were in Salt Lake City, my mind was in Ferguson, Missouri.

When we teach, how do we discuss something truly important? Specifically, how could I talk about the murder of an unarmed black man the same age as my students?  I asked myself: What is taught in the not teaching? What is not covered in a course? When we omit difficult conversations or troubling current events, what does that teach students about what is important, worthy of attention, urgent? I had to find a way to address Ferguson within the context of my class.

And then I remembered Anna Deveare Smith’s Twilight: Los Angeles 1992—a script to analyze that gives historical perspective to Ferguson through a poly-vocal report on incidents related to Rodney King and police brutality from several years before most of my students were born.

I felt anxious about introducing my students to Twilight as our first play. It contains difficult subject matter and a healthy dose of profanity. The night before class, I dreamed that my conversation about Twilight erupted into a screaming match. My dream was comprised of young students and older adults—I felt way out of my league. We were in an open, public place. Others came to listen and participate. And then riot police arrived, and it all erupted in violence. And I woke up.

I prepared responsibly. I gathered citations about police violence against unarmed people of color. I collected information about the militarization of police, and how many times and in what cases the National Guard has had to subdue US citizens. For inspiration, I reread an article about the Ask Big Questions project.

And I asked myself some big questions: Was forcing a conversation about Ferguson into a Script Analysis class responsible, or self-indulgent?  Is it a mark of privilege to be able to discuss this, as a white woman far away from Ferguson in a two-year, time-limited job? To whom do we listen and, conversely, whom do we dismiss outright due to proximity to an event? By what criteria do we determine “proximity”—geography? Race? Age?

For courage, I recalled favorite professors who speak in strong, political statements about what they believe. Throughout my education, those people opened up my world, challenged me, and offered insights—which were sometimes tough to swallow. In the classroom, I tend to play the middle and not to opine too much, for the sake of keeping dialogue open. But do I just tell myself this in order to mask my insecurity? To mask the fear that I lack the mental dexterity to “back myself up” with citations and facts?

I thought about a pedagogy that acknowledges, “I don’t have all the answers, and I don’t know how to talk about this, but I am curious. I read, I listen, I learn. And this is what I’ve seen.” I made the choice to include this kind of transparency in my class, and to take responsibility for my “agenda” since I did, indeed, have one. I decided not to be sneaky about using Twilight to talk about Ferguson. I do think such conversations are important, and I believe theater functions best when it stirs conversation. 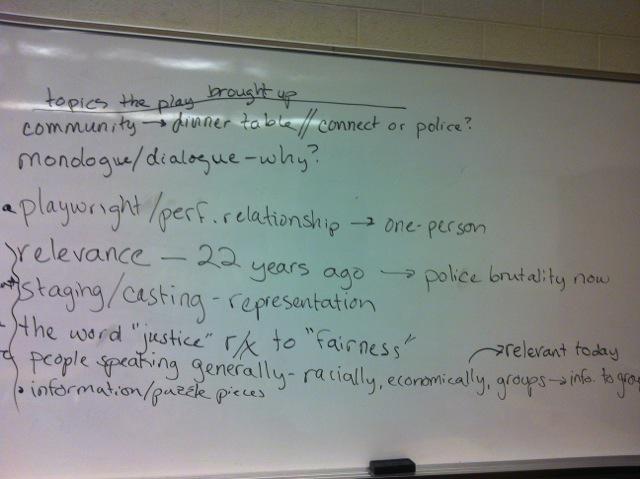 I started the discussion about the play openly, asking if anyone had any questions, scribbling topics on the board as they responded. Many said they had never read or seen a play like Twilight, which inspired a conversation about the possibilities of art to entertain or to educate. Another topic that emerged was “relevance,” referring to police brutality and Ferguson, and the students started making connections across time and geography. One student observed that people in Twilight generalized about race, economics, other demographics, and how we fall into stereotype and misunderstanding today.

I asked what feelings or images surfaced as they read the play. Students felt: confusion, sadness, contention, shock, a ringing in the ears, overwhelmed, connections/ recognition/affection, sympathy, ignorance (about the events in 1992—and about Ferguson), relevance to Ferguson, disturbed, and that the play felt “personal,” as if while they read they felt along with the people in Los Angeles. I was surprised at my students’ engagement and willingness to empathize and personalize Anna Deveare Smith’s docudrama.

Throughout that class period and the next, we spoke thoughtfully and sensitively about both Twilight and Ferguson. The conversation was slow, quiet, and honest. There were no ignorant remarks, no screaming matches, and no riot police.

One person felt surprised to read the words of Charles Lloyd, an African American attorney who defended Korean shopkeeper Soon Ja Du, after she shot LaTasha Harlins, a young black woman. We talked honestly about why those moments are surprising: because the narrative of identity politics is so compelling that we consider it an exception when someone transcends (or transgresses) across racial lines.

I asked why we were talking about this, and one woman confessed that she was sick of talking about it; the news had said enough. She astutely suggested that by continuing to talk about it, hear about it, and keep it in our consciousness, we risk being desensitized to the story. Through incessant news coverage, she felt desensitized to Ferguson and Mike Brown. She had heard enough. She was ready to move on. She threw my own example back at me— when I was young, I had seen the footage of Rodney King’s beating on the news so much that it had almost transformed into a series of detached images—background noise.

I acknowledged her point. In response, I asked how some people feel isolated or safe from this kind of violence even though it could have happened here. Some do not feel so distant from the events. Some don’t feel desensitized. As I spoke, I felt extremely conscious of the only African-American student in the class, sitting next to the woman who had spoken. I wondered at her “proximity” to Ferguson, if she was “desensitized” to the violence in Missouri; and I wondered at my own projections onto her.

At this moment I was grateful I had gathered all my facts. I stated, “A person of color is shot by the police approximately every twenty-eight hours in this country.” I watched the breath leave the body of the woman who thought she was desensitized. The rest of the room mirrored this visceral response, based, it seemed, in genuine empathy. I asked, “How can we do anything about it, if we stop talking about it?” I explained that I didn’t think we needed to have the answers here. But, in asking questions, we are at least engaging in the issue and treating it with significance.

We finished the conversation with the question, “To whom are we responsible?” By drawing conceptual concentric circles out, from the circle of our department, to our university, to our city, to our country, I hoped we would consider our role as global citizens. But we didn’t get to all of that. We were out of time. Fortunately, we have the rest of the semester.

I never anticipated Script Analysis would engender difficult dialogues and provide me with such opportunities for growth in facilitation. I am learning a great deal about transparency, courage, and vulnerability. It’s shaky ground to cede authority and tread into territories of complexity, answerless and unarmed. But I know I can prep thoroughly, research hard, and then let it go.

I step into the classroom, desks arranged in a circle, behold my student collaborators, and trust.

Bravo. Very good read. I admire your courage and think your students are fortunate to have you.

absolutely, as an educator, this is, I believe, part of your role. to both connect the dots between the art and the era in which we live and the history of what different communities have experienced. When you doubt yourself or your intentions, reread your own words about transparency, courage and vulnerability. Your willingness to dwell in the unknown and your faith in leaving the conversation open to a multiplicity of viewpoints and lived experiences offers students the chance to risk stepping into someone else's shoes. This is how we build empathy. This is how we bridge the unknown--by allowing it to exist. And by naming our projections onto others, by owning our own assumptions, by being creatures with blindspots and self-awareness, I think we do the best service of all to our students. We show that it's okay not to have the answers, it's okay to live in a gray area, it's okay to change our minds, and, it's okay to express our convictions, whether popular or not. thanks for your honesty. it's a good reminder for all of us who teach and who strive to be global citizens that we have an obligation to open the dialogue up into uncertain territory and to hold the space in the room for dialogue, disagreement, misunderstanding, connection and disconnection--these are all part of learning.

This is excellent. Thank you, not only for sharing this story, but for doing this work.