From the Stage to the Streets

Chicago Artists and Activists Respond to “We Must Breathe” 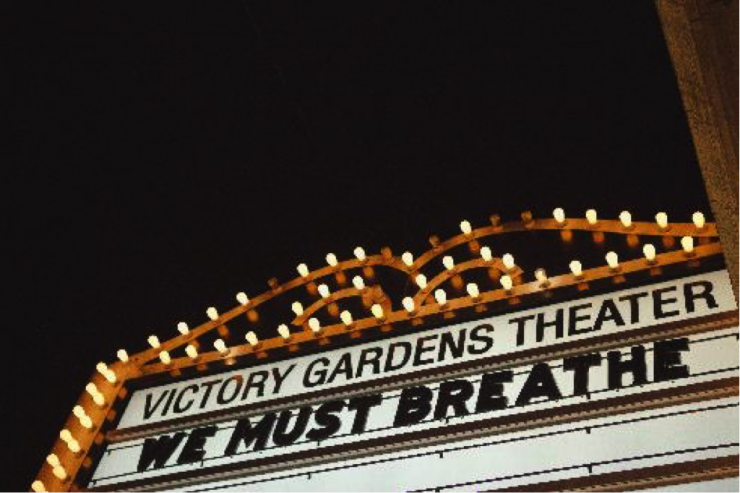 If you search #WeMustBreathe on Twitter, you will be sorting through Tweets for hours. 140 characters for one Tweet may not seem like much, but when compiled under a hashtag that describes an evening of performance and protest in Chicago, 140 characters turns into several thousand:

“Proud to be a Chicago artist. #WeMustBreathe”

“Protesters shut down Lincoln and Halsted after #WeMustBreathe performance.”

“Thank you for #WeMustBreathe; this is theatre at its most socially relevant.”

“The pure definition of art into action #WeMustBreathe”

"Proud to be a Chicago artist. #WeMustBreathe"

And the list goes on and on and on.

On December 18, more than 350 Chicago artists and community members (and another 1,120 Livestreaming from six different countries) gathered at Victory Gardens Theater to bear witness and respond to performance pieces created in the wake of the national outcry stemming from the deaths and verdicts of Michael Brown, Eric Garner, Tamir Rice, and countless others.

Cries of “I can’t breathe” and #BlackLivesMatter have shed harsh light on our country’s ongoing struggle with issues of race, discrimination, inequity, and police brutality. As a theatre that passionately believes in civil discourse and social justice, Victory Gardens wanted to provide a space where Chicago playwrights, poets, actors, and community members could respond to these recent events in the best way they knew how—through their art.

With works presented by playwrights Marcus Gardley, Tanya Saracho, Nambi E. Kelley, Andrew Hinderaker, Calamity West, and Kristiana Colón alongside poets Javon Smith, Nikki Patin, Kevin Coval, and Malcolm London, each individual piece was transformative in its own way. Each of the twelve pieces required a level of courage and resilience from our artists. 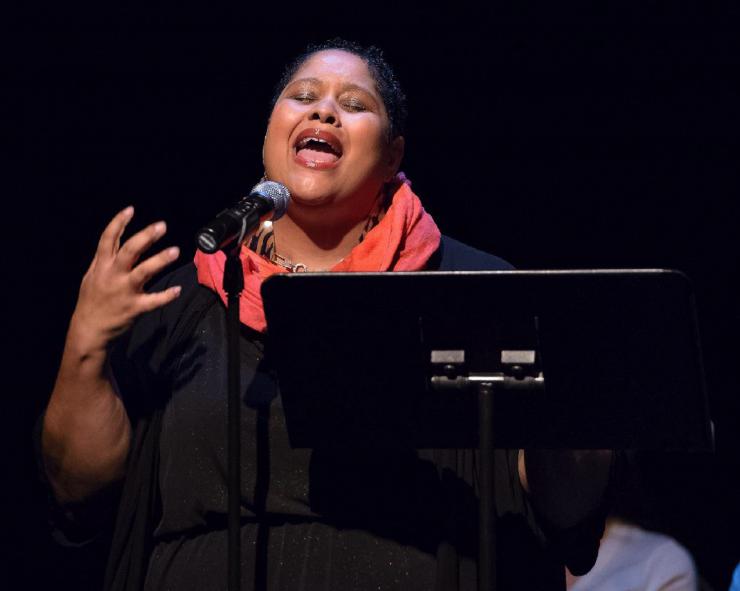 Questions like “What am I supposed to do?” and “Why am I talking about rape when I’m supposed to be talking about how we can't breathe?” represent a handful of moments where it became apparent that each of these writers, poets, and performers were using their art form to process sorrow, anger, and confusion. Many patrons snapped fingers and clapped during moments of understanding. And in moments of harsh truths, several wept and shook their heads in solidarity. The tense eighty-minute performance garnered stillness from the large crowd, and a collective energy was growing in the space. 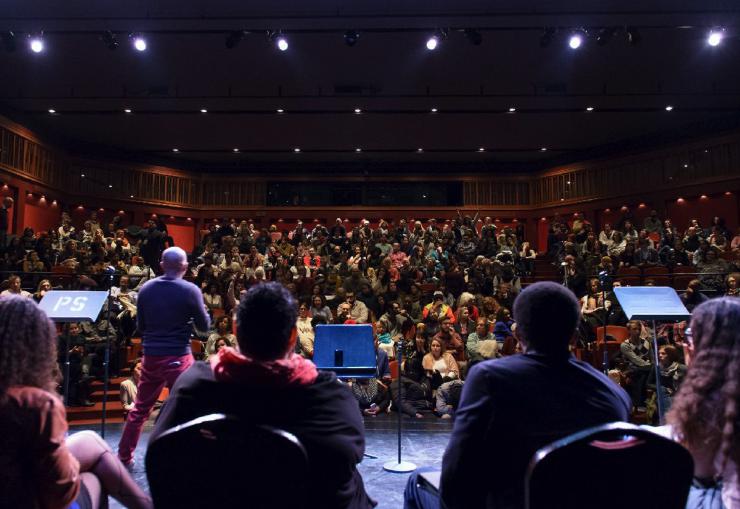 But probably the most important element of the evening was the conversation that followed. Immediately following the performances, Samuel Roberson of the Congo Square Theatre joined the artists on stage and began to delicately moderate a discussion on the work, giving our patrons the ability to engage with each piece and with each other in an open venue where, as a collective, we could ask the same questions as our artists hoping that somehow, perhaps, we could provide a few answers.

With the majority of the conversation centered on the questions “How can we lend our voices as artists?” and “If we haven’t gotten involved yet—how can we?”, several patrons were quick to share stories and testimonies addressing the many complexities surrounding this very issue.

And as the conversation continued, that palpable energy of passion, commitment, and desire for change continued to grow. Audience members began to not only pose questions and thoughts to the artists and the moderator, but to push and challenge each other. The mere fact that every single person stood in the theatre to have this dialogue following the performance is a testament to the space they collectively crafted for solidarity, open-mindedness, and respect that is vacant for several communities. So much so, that towards the end of the dialogue, several members from Chicago Artists Against Injustice stood up from their seats and began to sing:

“I can hear my brother crying, ‘I can’t breathe.’

So now I’m in the struggle singing ‘I can’t leave.’

Calling out the violence of these racist police

And we ain’t gonna stop till our people are free.”

It was in this moment that the artistry transformed into activism. Patrons were handed fliers by several members of the group and were encouraged to sing alongside them. And as a collective, they poured onto the mainstage to create an altar made of toys to honor the black lives lost and to empower the black youth of our communities.

Several members encouraged attendees to join them in an act of civil disobedience. Some stood behind, though many joined them in the streets outside Victory Gardens. From the artistic, to the dialogue, to the die-in that took place in one of the busiest intersections in Chicago, scholars, activists, and artists alike will have many names for what took place at Victory Gardens that night.

Some might call it theatre for social change. Other may phrase it as the art of protest. Whichever way you want to frame it, call it, or archive it—it will live in the space between the people and the stage forever. Chants of “I CAN’T BREATHE” were transformed into declarations of “WE MUST BREATHE.” Patrons seated at the theatre evolved into activists holding hands, blocking the six-way intersection just outside Victory Gardens. 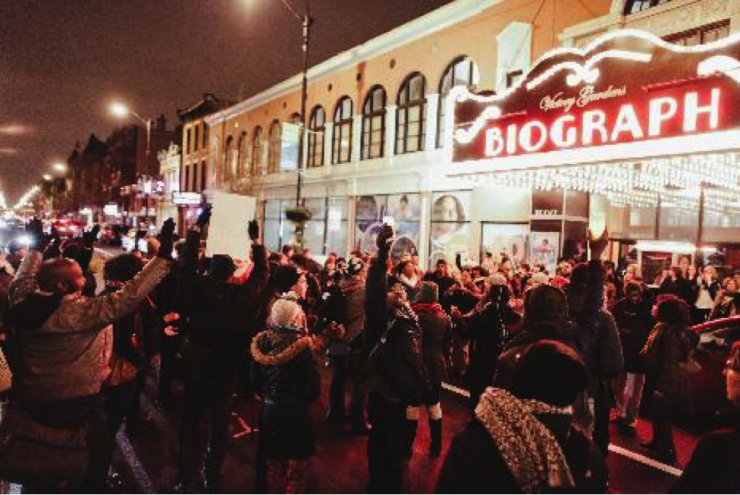 Protesters shouting “We Must Breathe” outside Victory Gardens Theater.

When the staff at Victory Gardens gathered to plan this event, we were very unsure what to title it and even more unsure what might come of it. We wanted this event to be empowering, yet acknowledging that this kind of work stems from the deepest kind of oppression—the kind that’s existed much longer than anyone really cares to admit, and the kind that many of us still face today. We wanted this to be a moment, just one, where Chicago artists could gather, organize, and respond. We wanted this to be the start of something. And it has been.

So we decided to sleep on it, and return to the thought the following morning. Later that night, Chicago protesters shut down Lake Shore Drive, and I found myself sitting in my car, watching the news on my iPhone, reading the Tweets, seeing the pictures—and crying. And then I realized... I couldn’t breathe.

What Eric Garner said during his last moments may have been literal, but the weight of oppression against people of color has been just that: suffocating. And I was reminded of this feeling of someone stepping on your throat with no way to escape—something that I, and many others, have felt far too often in far too many ways. And then it came to me: “We Must Breathe.” Because it’s true. Because not breathing isn’t an option anymore. We must breathe. We must.

As Artistic Director Chay Yew beautifully articulated in his program note, “We hope this gathering will allow our artists and our city to find better ways for a more equitable America. And we hope it doesn’t end tonight. This evening is just the beginning. We must breathe again. And we will.”

So I take this moment. This very moment in the wake of these performances and protests that took place at Victory Gardens, my artistic home, and I inhale. I exhale. And for the first time in a long time, I breathe. 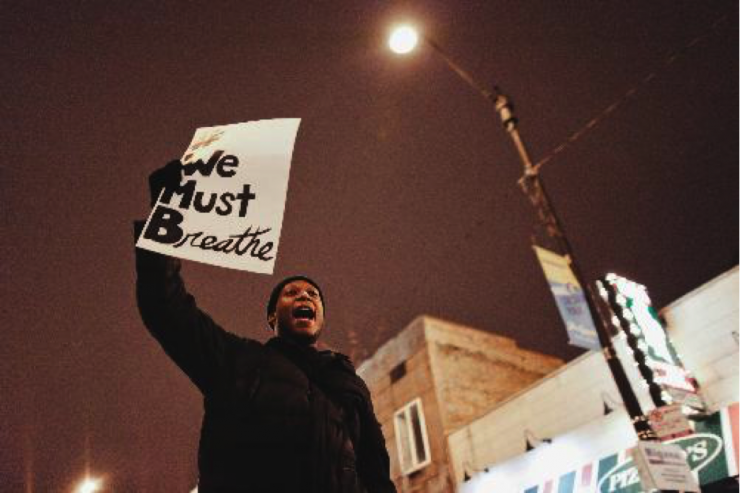 Protester carries a sign and marches down Lincoln Ave.

Photos 4 and 5 by Tyler Core

Finally reading this. So important, Isaac.

There were some great ideas shared on twitter during your event. Will you be sharing them anywhere?

Thank you Isaac and the Victory Gardens team for this inspiring event. We must come together and breathe together towards justice.

So much gratitude for this work, for the summation in this piece, for the inspiration, for the courage, for the power to embrace struggle, each other, art as process, and art as change. Thank you.