This is the ninth installment of the blog series Submitting Like A Man (SLAM), created by writer Mya Kagan. The project examines what happens when Mya resubmits scripts to previously rejected opportunities, this time using a man’s name. For more on SLAM, check out submittinglikeaman.com or follow @theSLAMblog or @Mya_Mya.

Max, like me, is on the cusp of turning 32—but this month, he’ll also celebrate turning one. That’s because it was a year ago, in July 2015, that I first “invented” him. If you’re looking for an excuse to eat a cupcake this week, Max’s first birthday is more than valid.

In my year as a “fake man,” there are many things I’ve observed, experienced, and been asked. So far no jock itch, but maybe that’s still to come. As I’ve said many times before, I feel it’s an important part of this project that Max and I be as identical as possible, except for gender. But what I’ve learned is that despite any of it, being him—actually interacting with others online and by email as a seeming man—is most certainly a different experience than being me.

When I started SLAM, I was interested in examining how a male name might allow otherwise-rejected work to be considered in a different light. But it turns out SLAM has also been about the experience of living in a man’s shoes, even more so than I knew.

The short of it is that I’ve found being Max to be wonderfully freeing. There is a part of it that I think has nothing to do with gender; there’s something inherently freeing about simply being someone that nobody actually knows. But above and beyond the sense of anonymity, I’ve found life as Max to be freeing because as him, I feel like I have more permission to fail—not because of being a faceless pseudonym, but because as a man, my feeling is that Max already has one foot in the door on pretty much everything he does.

At this point, I am going to make an aside to say that I am not criticizing men for having advantages; what I am criticizing is the system and history and bias that has allowed it to stay that way. And I know that not all men experience advantages across the board—there are many cases in which white women (such as myself) have more of the metaphorical foot in the door over men of color, such as equal pay. And even among just white men or straight white men, it’s not like there is a universal rule of advantage; every person is unique in their makeup and experiences. But from resumes to pen names, it’s no secret that we live in a world where there are frequently advantages to being among Max's demographic, and that’s precisely what this project is here to examine and the very reason for the invention of Max.

The reality of how it felt to have these new advantages did not hit me until April, when I did an interview about SLAM and was asked if I felt that Max had taken on a life of his own in any way. And as I thought over all the ways in which I was making sure Max and I were perfectly identical, it occurred to me that the one way in which we’ve become different is that I don’t worry if he shows natural flaws, which is something I try very hard not to do when it comes to myself.

I am very detail-oriented about my own professional writing endeavors, and when I prepare a script submission for myself, I usually check my spelling twice, make sure my handwriting looks nice on the envelope, and am very cautious and aware of the way it’s presented. The same goes for my website and social media presence—I’m exceedingly careful about coming across super-professional, avoiding anything that could be misunderstood or misconstrued, and having good online etiquette. It can be difficult because, as someone who primarily writes comedy, I want my style and tone to come across in everything I submit—not just scripts but also artistic statements and other such documents, but I often find myself censoring the humor for fear of not being taken seriously or looking like I don’t care.

With Max, I feel much more free, and don’t feel the need to do most (or sometimes even any) of the self-censoring or cautious checking. And it didn’t dawn on me until the April interview that the reason for that difference was my feeling and perception that people are harder on women than on men—that as a woman, I am going to be put under a microscope and judged and critiqued (consciously or otherwise) for every little “i” that’s not dotted or hashtag that isn’t hilarious. As a man, I feel less like I have to worry about these things. Again, this isn't something measurable. I can't “prove” that I have reason to feel this way, but when I look back at my year as Max, it’s a feeling I can't deny. And this idea that women are more heavily judged and scrutinized and criticized than men is not something true across the board for all men and all women, but when you look at how we treat women in the public eye, it’s hard to feel otherwise. 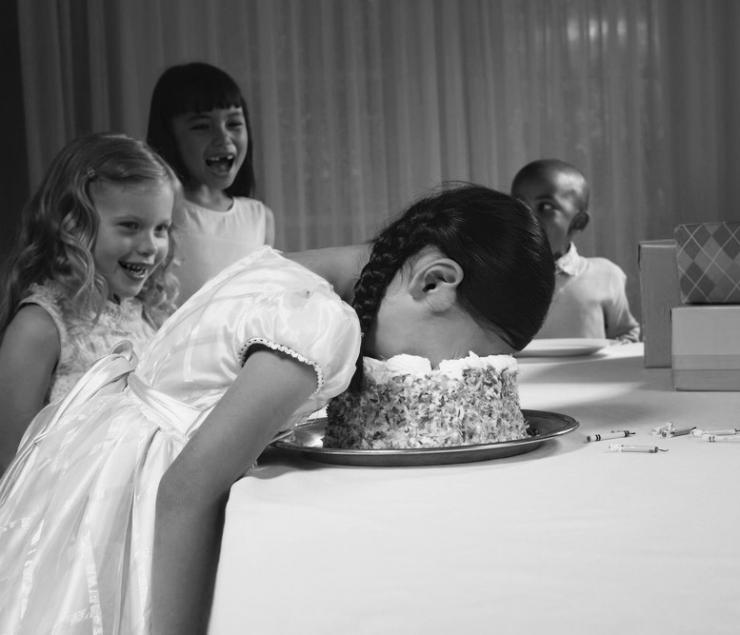 So it’s interesting now, on Max’s one year “manniversary,” to realize that a huge part of this project has been living life as someone who by default gets the benefit of the doubt on almost everything. When I started SLAM, I was interested in examining how a male name might allow otherwise-rejected work to be considered in a different light. But it turns out SLAM has also been about the experience of living in a man’s shoes, even more so than I knew.

And let me tell you: It’s freeing. Not because of some trite joke about how women’s shoes are so uncomfortable, haha high heels suck, LOL emoji. But because as Max, I don’t have to worry—at least not as much—that his leadership skills will be labeled “bossiness,” or his humor will be dismissed as “silly,” or his edgy tweet or blog post (#meta) will be met with responses that he should be bludgeoned and left in a ditch. At every corner, life as Max is easier and less intimidating than the equivalent interactions I have as myself. So for Max's anniversirthday wish, I hope that everyone can have this kind of freedom. And not just for a day or a week or a year, or as part of a pseudonym identity, but forever and as themselves. It really shouldn't be too much to ask.

I've taken that freedom many times, and more than once it has backfired on me. Being a mouthy broad is great now that I'm a crone, but sucked for many years. Go Max!