Teatro de la Luna in Arlington, Virginia, hosts an international theatre festival every year, sometimes bringing works and artists from only one country and sometimes many. The aim of the festival is to give Spanish-speaking audiences in the DC area a view into Latin American and Spanish theatre. Teatro de la Luna produces at the small and intimate Gunston Arts Center, in an area of Arlington with a large Latina/o population. The theatre, founded in 1991, has made solid inroads into the community, holding bilingual workshops, summer camps, a reading series of plays in Spanish, educational performances at schools, and training opportunities for actors and technicians. Teatro de la Luna’s director, Mario Marcel, is from Argentina, and his wife, producer Nucky Walder, is from Paraguay. Teatro de la Luna’s warm, homey atmosphere sets it apart. Homemade empanadas are sold at the concession stand. Numerous theatre staff greet audience members upon their arrival. People who happen to be sitting next to you may turn, introduce themselves, and shake your hand, then after the show, say goodbye as they go out the door—all in all, a very un-Washington experience.

This year’s festival—the theatre’s seventeenth—focuses on Ecuador. One of the festival’s shows is the US premiere of Maria Magdalen, La Mujer Borrada (Mary Magdalen, the Erased Woman), a solo show in Spanish, written and directed by Viviana Cordero. The festival includes a performance for children by world-renowned musician Juan Estrella; a performance of boleros; and another solo show, The Broom, based on excerpts from Anthology of the Broom by Claudio Malo Gonzales.

La Mujer Borrada, which won first prize in the Cupulas Festival of Monologues in Cuenca, Ecuador in 2004, features actress Juana Estrella. She plays Mary Madgelene, the apostle Peter, and a host of other characters—from radio and TV reporters. to gossipy old women—with stunning adeptness.

As the lights go up, Maria crawls out of a boat and slowly removes a net that has covered her for twenty centuries. Painfully she begins trying to speak. She finally articulates her name. Why she emerges at this time, after ages of being buried in dust, is never made explicit. It is enough that she is at last free and able to tell us her story—to correct, that is, all the misconceptions of her as a repentant whore tolerated by Jesus and the apostles, but of no greater importance.

In scenes that are short, lively, and funny, the play shifts back and forth from antiquity to present day and a striking new picture of Mary Magdalene emerges. She was never a prostitute. Jesus was her husband. And she was studying to be a priestess of Isis.

… the play shifts back and forth from antiquity to present day and a striking new picture of Mary Magdalene emerges. She was never a prostitute. Jesus was her husband. And she was studying to be a priestess of Isis.

Peter, an old busybody with a bent back, whom Estrella plays masterfully, tells Maria she should veil her face and keep to women’s work—sewing, ironing, and cleaning. He scolds her for tempting men with her clothing and for wanting to change things. Peter delivers his scolding gently, like a concerned relative, but he is, as we find out, dangerous and cold-blooded, though still, somehow, endearing.

Estrella effectively makes quick shifts in pace and tone, changing seamlessly from one compelling character to the next. In the role of seedy, ridiculous, fast-talking radio host, she speculates about Maria’s possible marriage with Jesus and laments an ongoing work stoppage by sex workers.

The scene shifts and all slows down. Maria becomes reflective. She notes the phrase “you cry like a Magdalene” has found its way into common usage. “I wasn’t crying because I didn’t want to be a prostitute,” she explains. “I was crying from pain, for love, for our destiny.” Both she had Christ had royal blood, she says, and she should have ascended to the throne. 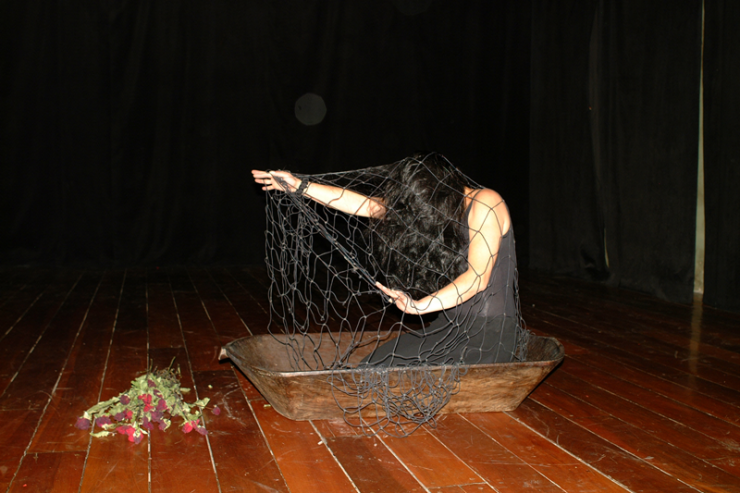 Next, Estrella is a parody of the vapid, fingernail fluttering TV talk show host, interviewing Maria, asking her pointed questions about her sex life and not giving her time to answer. The talk show host even interrupts her to hold up a jar of moisturizer, the one Maria must have used to look so good after all these centuries buried.

Excerpts of “The Song of Songs,” “The Hymn of Isis,” and the poem “Un Rostro” (“A Face”), by Alexandra Pizarnik, find their way into the script, lending  variance to both language and mood. The play, as a result, thoroughly holds our attention. The scenes featuring Peter are the most intense. He drives Maria out of her rightful place in history. “If we do things well,” he explains to her, “in the future we will have our own city, our own bank, and our leader will be more famous than all the emperors.” But to secure this vision, he has to make Jesus a god, and gods are chaste, without the needs of  men. They don’t have girlfriends. He puts Maria in a boat without oars and sends her out to sea.

Maria insists that she will survive, that her Gospel will be found, and she will do as Jesus had asked her to do and proclaim the good news.

The play is thought provoking and entertaining. Estrella’s acting is marvelous. The technical demands of the production are simple—no sound design (I didn’t miss it), and basic lighting cues that are written into the script. The night I attended the house was nearly full, and members of the audience, only a few of whom were using headphones for English translation, seemed to be fully appreciating the play. Teatro de la Luna is an overlooked treasure in the DC area, and a lovely escape from the usual offerings.

Is there somewhere to find or purchase a copy of the script?

A Weekend in the Emerald City

Holly L. Derr on Destiny of Desire by Karen Zacarías, Animal by Claire Lizzimore, Queens Girl in the World by Caleen Sinette Jennings, Women Laughing Alone with Salad by Sheila Callaghan, and Uprising by Gabrielle Fulton, all part of the Women’s Voices Theater Festival in Washington, DC.

Something is Afoot in Washington, DC
Holly L.
Derr
Essay

Something is Afoot in Washington, DC

Holly Derr reports on the Women’s Voices Theater Festival, bringing together more than 50 of the Washington, DC’s professional theaters to feature world premieres of new plays and musicals by women.