Please note that HowlRound does not advertise on the site, but thought this was an interesting way technology and new play development come together that might be useful to our readers.

I'm not an ultra gadget guy—I don't have a smart phone or an iPad, but I've come to appreciate a handy high-tech tool that's proven especially useful for when I'm developing a new play: a LiveScribe Pen. Originally, I bought it because I was organizing an assistive technology fair for kids with special needs. But I've discovered that it's incredibly helpful in meetings with my writers' groups, as well as in workshops and readings. 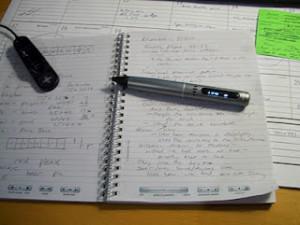 Basically, the LiveScribe pen has both a built-in camera and a microphone. Using special paper, I'm able to write notes on a pad while also recording audio of what's being said. By tying together the special paper (it has a tiny grid printed on it), the camera recording what I write, and the microphone, I can then play back later exactly what was being said while I was writing. In playback mode, I can just tap the tip of my pen to any spot on the page, and it'll give me the audio that was recorded when I was writing that word. In addition, using a USB cable and small docking port, I can upload what I've written on the notebook, along with the audio. The pen can manage up to five three-subject notebooks at once, and I can store all the notes I want on my computer.

For the second and third weeks of July, I was workshopping a new play, Flight, at the Huntington Theatre Company. Using my LiveScribe Pen (with the actors' permission, of course), I could record the audio of the scene we were rehearsing, as we made various tweaks and changes. When I was in my office early the next morning, trying to figure out which changes made sense and how to improve them, I could tap on my notebook and hear the scene, in its various incarnations. I could pay attention to subtle in-the-moment accidental actor adds or cuts. I could listen for tone and rhythm shifts that I might want to enhance with further revisions.

For the final read through, I took minimal notes in my notebook, laying out the scene headings for future navigation and specific points of concern, while being able to really pay attention to what was being said (rather than writing super detailed notes). When I went back a week later, it was easy for me to call up the scene and listen to it, while following along with the script, and see where I wanted to make changes. I could play the same moment five or six times, imagining it with different lines. Or I could speed up a section where the actors seemed half a beat slow, to hear if it worked better faster.

I could pay attention to subtle in-the-moment accidental actor adds or cuts. I could listen for tone and rhythm shifts that I might want to enhance with further revisions.

It's also helpful in recording notes during a meeting or discussion about the scenes or read through. Again, this way, I can really pay attention to the conversation in front of me and can take more minimal notes. (The LiveScribe pen is a boon for college students, especially those with learning disabilities.)

Here's a sample of some notes from my playwrights' group last year (I know my handwriting is embarrassingly bad, but it was written while listening, on my lap) that I downloaded right from my pen to the computer. You can't hear the audio, but it's all on my computer. And it's still on the pen, which can hold up to 200 hours of audio. 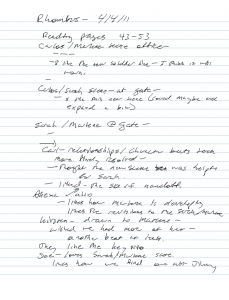 If I tap the pen on the page where it says "Sarah/Marlene @ gate" it plays back the audio for that scene. (For the file on the computer, I just click there with the mouse.) If I tap or click on the part about the discussion, I can hear what was being said.

The issue of legality has been raised. I'm careful to let people know what I'm doing and ask permission to record audio when I'm in a meeting or reading. If you're using Equity actors, there might be union issues. In my case, I'm using the audio only to enhance my own memory, not to broadcast in any way or share with any other person. But I think it would behoove writers to be somewhat cautious.

I could see how this could also be a boon for collaborators on projects. Let's say you have a team writing a musical, but the lyricist can't be at a reading of the piece—with the LiveScribe pen, the file could easily be e-mailed to her after the fact.

It's not magic, but when you see it in action, it sure feels that way. For me, it's been a way to get far more mileage out of each reading or workshop of a play, over a longer stretch of time.

A Dream Deferred: Black, Indigenous, and Women+ of Color Playwright-Activists

Yvette Heyliger reflects on her experience as a Black woman artivist and discusses the racial and gender inequities in the theatre field.

Developing Genuine Malawian Theatre on Stage and on the Radio

Fumbani Innot Phiri Jr. interviews playwright and director Inno Katz about his career and his efforts to redefining Malawian theatre by focusing on local stories in both English and Chichewa.