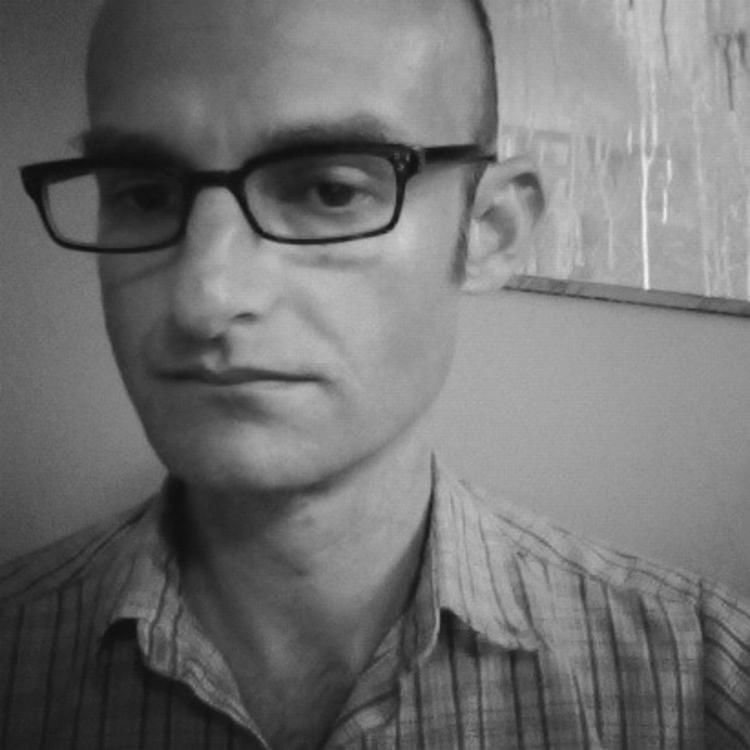 It’s tempting to view technologists and socially engaged artists as being diametrically opposed cultural figures in this, our desperate late capitalist year of 2014. Of course, such social media-driven simplifications are ephemeral and reductive. They’re useful for manipulating pageviews or simplifying a rhetorical turn in a master’s thesis or two, but little else.

In reality, there’s a great and untapped opportunity for civic-minded technologists to collaborate with similarly engaged artists on projects that address pressing needs within their cities and communities. What I envision goes far beyond interactive maps of public art locations. Instead, I would like to see deeper and more fruitful engagements between artists and technologists within the civic sphere. For example, a hypothetical site-specific work on gentrification within a neighborhood could benefit from a technology component. That might be a time-lapse map or visualization of the economic and demographic shifts within the neighborhood, or perhaps a location-aware walking tour guided by a simple smartphone app as well as SMS messages, for community members who do not own smartphones.

Artists engaged in civic practice may consider technologists to be a gentrifying force in their midst, even as they become increasingly reliant on the tools those technologists create. They may be unaware or even dismissive of the efforts of the civic technology movement, which has to date been more effective at engaging city officials, civic-minded geeks, and corporations in its efforts than artists or activists.

Conversely, civic technologists are unlikely to look at artists as social change agents, even though arts practice exists as a mature lever for community engagement and social change. Civic technology is a broad term, encompassing developers who build bus tracking apps, data analysts who work with nonprofits to enhance their advocacy efforts, and increasingly, city-led initiatives to release data sets and embrace open source technologies to increase efficiency and spur economic development.

In practice, civic technologists could learn much from artists engaged in social practice who are developing and experimenting with methodologies for listening, communicating, creating, and considering social justice issues.

Artists engaged in civic practice may consider technologists to be a gentrifying force in their midst, even as they become increasingly reliant on the tools those technologists create. They may be unaware or even dismissive of the efforts of the civic technology movement, which has to date been more effective at engaging city officials, civic-minded geeks, and corporations in its efforts than artists or activists.

We have two disparate groups of creative producers who are approaching similar problems from extremely different directions. Each group is likely to approach the other with some level of doubt, confusion, or even suspicion. As I straddle both circles in my personal and professional life, I’ve seen many opportunities for meaningful collaboration between the two groups.

Though I’m not a theatre artist myself, I’m a writer who has performed, and have worked with social change-focused arts organizations such as HowlRound and HATCH, the civic technology non-for-profit Code for America, and a number of technology companies and web-based social change publications. In conversations with HowlRound’s P. Carl and Vijay Mathew, and my partner Michelle Dahlenburg, the artistic director of Austin’s Conspire Theatre, I’ve been introduced to the projects and essays of Michael Rohd, and drawn to his formulation of arts work as civic practice.

I believe that the civic-minded hackers, data analysts, and visual designers of the civic technology movement could offer much to axis of tools and needs that Michael Rohd details in his essay, “The New Work of Building Civic Practice.” In that essay, Rohd outlines an x axis of “theatre activity that is not limited to the production of plays, but rather is a set of tools, of assets, that theatre artists have access to because of our experience in producing plays,” and a y axis representing the “set of needs, or desired outcomes, that we might encounter at those non arts-based spaces—if we listen.”

Advocacy, dialogue, story-sharing, civic application, and cross-section innovation could all be bolstered by bringing civic technologists to the table in a thoughtful way. The connections that I foresee are deeper and potentially more valuable than merely connecting buzzwords such as “storytelling” or “innovation.” What I foresee is an opportunity to increase the capabilities and capacity of the actors in these disparate groups.

The act of “translation,” as Rohd puts it, is key to facilitating this process—finding a shared language for stakeholders and social change workers to facilitate discussion. Similarly, a collaboration between civic technologists and artists working in the sphere of civic practice will require some degree of translation. For example, in the technology sphere, “Bringing diverse groups into meaningful exchange with each other” often falls under the domain of user experience (UX) design, a process wherein designers and developers engage the end users of a given technology to discover their needs.

A common misreading of the civic tech movement is that it promotes technology as a panacea for all of the issues that face our cities and communities. Few among its members would make such a claim. Still it remains tempting for critics to conflate the corporate-sponsored promises of Orwellian smart cities with the efforts of well-intentioned, if economically privileged, geeks.

The discussions and collaborations that I propose here will no doubt present challenges. Rather than considering the ideological underpinnings of a project, technologists are more likely driven by the “ask for forgiveness, not permission” approach. Projects are launched while still in development and conceptually retrofitted. In many contexts, there are advantages to this approach of rapid development and quick iteration based on user feedback. But in the civic sphere, this attitude can lead to ill-considered projects with problematic implications, such as crime tracking apps that reify existing racial, class, and social divides.

To the credit of the civic technology community, it has grown increasingly self-critical and considerate of the potential implications of its work. But there is much work to be done, and an ongoing need to provide civic technologists with ways to assess and engage with a given community’s needs. What I propose is a mutually beneficial meeting of creative minds who are civically engaged, and have unique skills and perspectives to offer one another:

What can civic technologists take from the principles of art as civic practice?

What can artists and organizations who perform civic practice work gain from technologists?

What I propose remains largely hypothetical—while these dialogues do already happen, they exist primarily on backchannels, with few concrete and successful projects to point to as examples. But at the fringes of a number of projects and organizations I believe you can see connections taking root and collaborations forming.

In the abstract, you have projects like HowlRound, which are modeling a conception of the commons that draws upon both progressive organizing and open source software development. There are events like the Urban Prototyping festival, which bring technologists and artists together to rethink and redefine physical space. Performers such as Mike Daisey and Cory Arcangel critique the ideology of the tech industry while remaining, in part, implicated by their embrace of the industry’s products.

The true opportunities and potential lie in the dialogues and hybrid storytelling forms that can arise from such collaborations. Imagine a site-specific performance that addresses gentrification in conjunction with a location-aware mobile web app that provides additional context and statistical insight. A community-based performance that effectively surveys its intended audience via SMS messages that can be sent and received through any cell phone. New ways to engage and interact with communities on civic projects using the technologies that their members have access to.

As the Internet shrinks the world and precarious labor practices erode the economic stability of a wide swath of creative cultural producers, we’re all becoming hybrid creators. A talented visual artist facing down a mountain of student debt may resort to designing smartphone apps, while the artistic director of a small theatre company picks up Excel and HTML skills to support the company’s work and supplement her own income.

At the core of this is something rotten, a diminishing of the economic, academic, and civic institutions that once supported both a stable economy and a vibrant artistic community. Despite this, there has likely never been a time when so many educated creative producers have been engaged with the issues that affect their cities and community. Nor have their been so many opportunities to connect, discuss, debate, and collaborate on civic projects.

Not every conversation will be fruitful, nor will every collaboration be useful. But if we’re to make it through the next few decades supporting justice and a vibrant arts community, the only thing that’s going to save our asses is conversation, collaboration, and experimentation with the plethora of tools, skills, and types of storytelling forms that are at our disposal.

The SXSW Interactive 2014 panel that I organized with software developer and designer Emily Wright aims to help prompt such conversations. Our panel, Taking it to the Street: Neighborhood as Interface, will review successful cross-disciplinary collaborations between civic technologists and artists, and address some of the challenges and opportunities for collaborations between the two groups. It will be a call for conversation, not answers; I look forward to further discussion and potential collaborations that arise from the panel, and the thoughts of the HowlRound community.

Thanks for this. Our arts organization has started conversations with some civic tech focused folks here in Oakland, CA about how to bring arts and tech orgs together towards civic practice aims. This piece helps inspire and guide. Thanks!

I so appreciate the thinking about and expansion of notions of Civic Practice that you raise here. Linking Creative Producers across fields and disciplines in a shared investigation of listening and community co-design is indeed i think at the core of community health and opportunity these days, not to mention the front line of social justice movement innovation.

One current experience it brings up for me-

Through the Civic Practice Lab I run at Lookingglass Theater in Chicago, I am doing a bunch of work with the City. Including a fairly substantial participatory process with Chicago parks working to connect individual Park Supervisors with neighborhood community stakeholders and collaboratively build strategies for increased participation and neighborhood investment. Over recent weeks, its become clear that the two major issues being identified by Parks staff as challenges are safety (both real security issues, and perception of security issues) and, Brand. Their term. That the Parks brand isn't serving them in regard to visibility or perceived quality. And here is the interesting part- they are hungry for collaboration, on the local park by park level, for design and technology assistance...to be more connected to their immediate surrounding region...but they have no idea who to turn to, nor can/does the city have an apparatus for aiming those needs towards interested and engaged potential partners in the 'civic technology' world.

So already, building those connections has been on the agenda, and your article, both its language and frame, will no doubt help as we work to help build those bridges between a City department, local artists and technologists.