What You, Theatremaker, Can Learn from Theatre for the Very Young

“Where’s the TV?” a five-year-old sitting on a chair with pretzeled legs asked. “There is no TV,” the mother answered, “this is a live show.”

That conversation happened next to me in early May during a production at the Alliance Theatre’s Toddler Takeover in Atlanta, Georgia—an annual festival of international performances designed for audiences aged zero to five and their guardians. The Alliance’s trailblazing commitment to theatre for the very young has been shepherded by their director of theatre for youth and families, Rosemary Newcott, who is retiring at the end of this season.

But back to the five-year-old’s quandary: Where’s the screen? This is not a curiosity distinct to a young, naïve mind, but is at the heart of what defines theatre’s relevance in a digital age where screens are ubiquitous. Theatremaker Jordan Tannahill tackles the existential “where’s the screen?” question head-on in his book Theatre of the Unimpressed. What makes theatre relevant or vital in the age of Peak TV? Theatre for the very young offers unsuspecting answers. 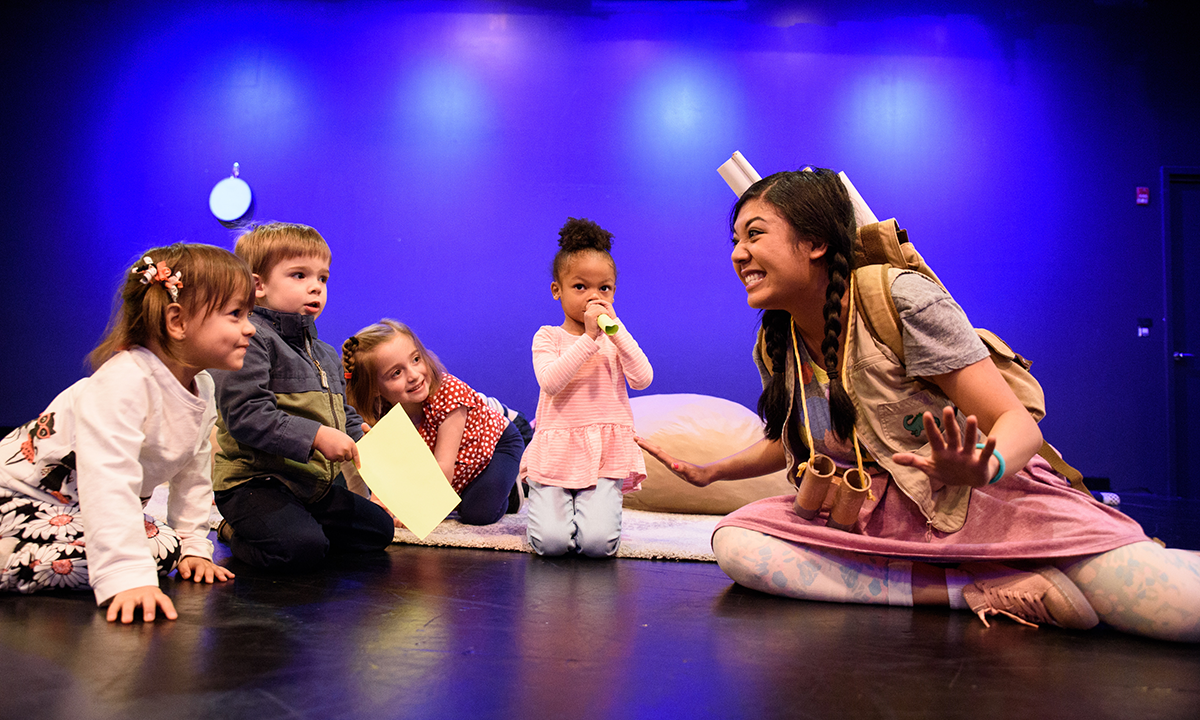 The Alliance's Toddler Takeover. Photo courtesy of The Alliance Theatre.

A director once told me to bring every play to an elementary school for a preview performance because children reveal precisely when a scene loses suspense or clarity, which is true. I worked as an elementary school teacher for four years and I learned two distinct truths about young minds: they absorb the tiniest of nuances and they share honest opinions. Reactions dance on their elastic faces. For example, when I taught five-year-olds, they consistently noticed if I hadn’t shaved that morning. A kindergartener once told me I looked hungover when unshaven. Very young folks not only notice the tiniest detail, but they interpret and share their thoughts uninhibitedly with little tact and abundant innocence. For theatre work, this sort of attention and honesty is invaluable because it offers raw and fresh alertness to the way we communicate in real time, an exchange distinctly beautiful to live performance.

Meet Who’s in the Room with You

Before two shows at the Toddler Takeover—the PaperBoats production of Especially on Birthdays (Australia) and Peut-Être’s Shh...Bang! (United Kingdom)—the actors interacted with the families in the audience. Both productions fed off audience engagement and participation, which inherently requires putting people on the spot, springing the narrative gaze upon them. For some folks, this attention can be empowering. For others, it can be overwhelming. By interacting with the audience, the artists got a sense of who was in the room and to what degree they’d be willing to participate in the storytelling—a practice that welcomes respectful collaboration.

Ditch Preconceived Notions About How Audiences Should Interact with Our Work

As an artistic community, we’re dissonantly formal and conservative in what we deem acceptable audience behavior. Often, the exaggerated sense of ceremony we place on our work silos us. But, like any good forum, the theatre is a democratic soundscape. In Shh...Bang!, the pre-show announcement made it clear that no shushing would be allowed. Despite what the title may imply, everyone was encouraged to react with impulsive noise. In the Alliance’s Gimme Please, audiences were encouraged to go onto the stage to touch, engage, and assist. In one vibrant moment, wooden marbles were poured from a bowl onto the floor and it was up to us, the audience, to use coned birthday hats to collect as many as we could. The loud crash of hundreds of wooden marbles hitting the floor was the sound of glorious, chaotic freedom.

Very young folks not only notice the tiniest detail, but they interpret and share their thoughts uninhibitedly with little tact and abundant innocence.

Whether it was a cold metal ladle that could be used as a drumstick on a plastic bowl in Peppercorn’s bilingual Música, Música, Máximo Música (North Carolina), threads of yarn in Brush Theatre’s Yao Yao (South Korea), fluffy slippers in Shh...Bang!, or crinkled rolls of receipt paper by the yard in Especially on Birthdays and Gimme Please, design elements were tangible and had sensory texture. Theatrical design should not be static or two-dimensional; it should have shape, substance, liveliness, and it should elicit feeling. This is one of the more essential lessons from the Takeover: while quality film and television can represent, entertain, transport, and teach us to think empathetically, theatre can teach us to feel.

Commune with the Audience

At every production in the Takeover, the audience had an opportunity to influence a plot’s trajectory, which aligns with Augusto Boal’s concept of the “spect-actor” where the audience is not simply a passive observer but instead an instigator of dramatic action on the same plane as the actor. Boal insisted this liberty allows audience members to rehearse their own social action outside of the theatre. In the Alliance’s bilingual La Tortuga and The Hare, the audience manipulated the pace of the plot by letting the spect-actors play music, dance, exercise, build a pillow fort, and even eat! When the audience ate carrot slices with the Hare, communion ensued, and the theatre became a sensory place of nourishment.

The wild, whimsical, abstract, and extraordinary experience of childhood is a global unifier. Despite political inclinations, social barriers, and geographic location, there are universal qualities to the childhood experience for us as a global community. Even though Yao Yao was performed in Korean, the themes of a child’s loneliness and isolation, and how the imagination has a resilient way of filling the crater those feelings create, were crystal clear.

Make the Rhythm Visible and Inescapable.

When thinking of dramatic flow, “rhythm” is a better word than “pace.” This is because it’s more authentic to the experience of consuming theatre, which is primarily a linguistic or auditory medium (after all, even silence is sonic). In the Atlanta Symphony Orchestra’s Music of Africa: The Story of Sugar Boy, rhythm is all around—the actors moved to different stations throughout the venue to musicalize chunks of the story. Each station had its own rhythm, which the audience got to contribute to with their own handheld instrument.

Keep It Short: Don’t Hold the Audience in Captivity

New works should be radically short. Are there exceptions? Of course, but they should be thematically deliberate like Taylor Mac’s A 24-Decade History of Popular Music or PearlDamour’s performative installation How to Build a Forest. Brevity demands conciseness, deliberateness, and judiciousness. It also frees the modern audience. Attention spans are shorter because audiences have more entertainment options accessible. This reality is not a tragedy; it democratizes time management because it gives audience members a marketplace for how they can spend their time.

The most dangerous impact of theatre in 2019 is that it can hold an audience captive. A venue’s architecture, seating location, and social codes hold audiences hostage—a sensation that is viscerally and painfully felt when someone is watching a production they dislike. Theatre can seem predatory when audiences feel robbed and trapped. Short shows reduce captivity. And in theatre for the very young, the experience is flexible—there is no shame to moving around the venue or leaving. For busy minds, stories that have an impact are the ones told efficiently.

Let the Audience Own a Piece

At the end of every play at the Takeover, the very young audience was allowed to take the stage and dance, explore, and play. Boal would be pleased with these conclusions because they break down the implied power structure separating the actors and the spectators. Audience members at Shh...Bang! were given bags to collect the feathers that had trickled like snowfall from the lighting grid. The audience was empowered to literally keep the play, taking a piece of it home. 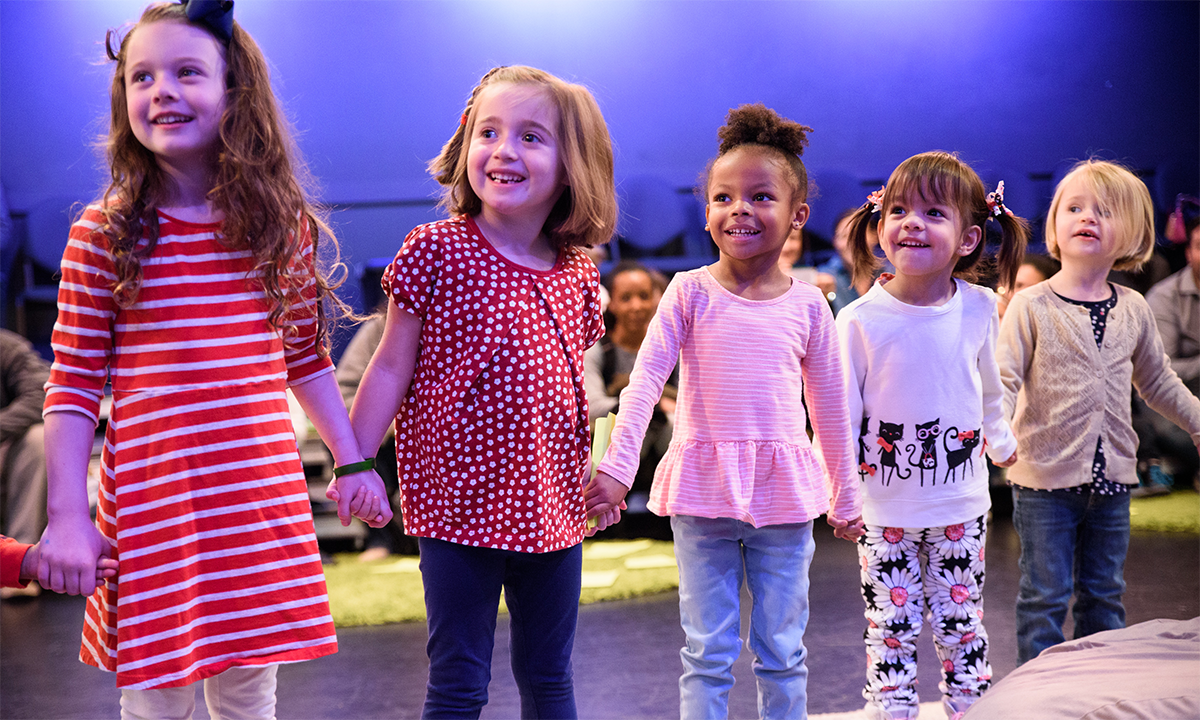 The Alliance's Toddler Takeover. Photo courtesy of The Alliance Theatre.

Here on HowlRound, writers like Elissa Adams, Sarah Coleman, Bethany Lynn Corey (who wrote a thesis on the subject at University of Texas at Austin), Steven Dietz, and Kim Peter Kovac have shared their perceptions of the genre with readers. Organizations like the American Alliance for Theatre and Education (which, full disclosure, I’m a board member of) and TYA/USA (whose biennial convention collaborated with the Takeover this year) have fostered advancements in theatre for the very young. It’s a growing field, and there are many practitioners who have dedicated their craft to this genre and are ready to share their insights on how it’s done.

Theatre for the Very Young Could Save Us from Ourselves

Creating a substantive live performance for zero- to five-year-olds demands that  we artists create with the needs of the audience at the forefront. Inviting very young people to participate in a narrative experience requires radical hospitality and humbleness. In these ways, theatre for the very young could be the most critical exercise our field can engage in 2019—forcing us to express vital experiences with clarity, a lack of ego, openheartedness, and conciseness, tapping into the uninhibited imagination of the child, which every artist attempts to re-attain.

Thanks, Alex - I loved reading this.  I nodded "yes" enthusiastically from beginning to end.  Beautiful articulation of how childhood can intersect with art making and story-sharing.