The 2015 Latinx Theatre Commons (LTC) Carnaval of New Latina/o Work featured breakout sessions on advocacy, artmaking, convening/networking, and scholarship, the four tenets of the LTC on Saturday, July 25. This is a report out on each of the sessions.

Advocacy
Months before Carnaval began in Chicago, a call was made to the organizations who were already involved with the work of the LTC. The ask was bold—who was willing to commit to producing one of the playwrights featured at Carnaval (who at this point had not been selected) within the next three years? Those of us who have worked in programming know that this is a tall order. 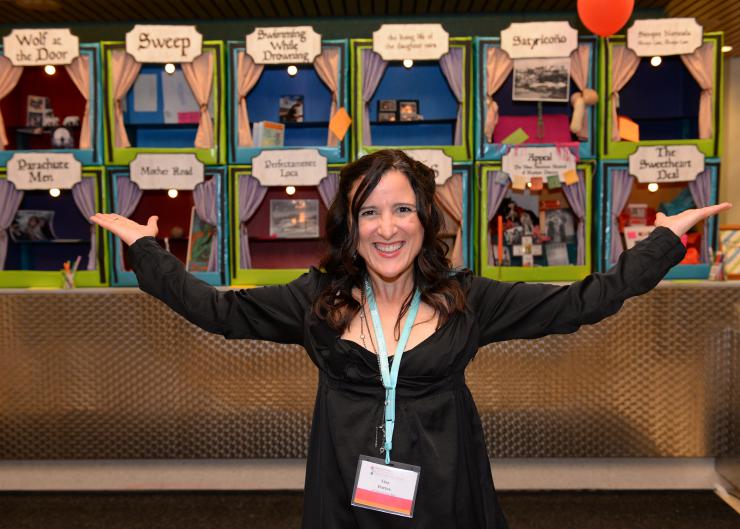 And yet, within twenty-four hours eight theatres had committed, and by the time Carnaval began seventeen had joined the ranks. At the root of advocacy is a willingness to put all you’ve got towards the advancement of a cause. It’s an act of championship that can sometimes look like a blind leap of faith. The advocacy breakout session was a convening of the committed theatres to discuss the immensely diverse group of talent, and how to best move forward. It can’t be overstated what strange and unorthodox territory this is for producers. There isn’t a lot of precedent or best practices to look to as a model of what the next steps are after committing. The meeting was jokingly referred to as “the blood bath” of artistic directors and associates battling it out for their favorite writers.

The meeting was jokingly referred to as ‘the blood bath’ of artistic directors and associates battling it out for their favorite writers.What actually happened was less of a blood bath and more of a love-in.

What actually happened was less of a blood bath and more of a love-in. There was incredible generosity between producers not only towards each other but towards the not-present artists. There was careful consideration of honoring existing relationships and finding opportunities for new ones.

A working group organized by the LTC Steering Committee is already at work exploring the best ways to foster these commitments into new collaborations—a task that once completed will provide a powerful example of how programming and generosity can be used as tools for radical advocacy.

Artmaking: Fornés Writing Workshop
Migdalia Cruz led a playwriting workshop utilizing the methodology of her mentor, María Irene Fornés, award-winning Cuban-American playwright and one of the most influential playwriting teachers of the twentieth century. In preparation, Migdalia specified elements Fornés included in her workshop; the room needed to be set up with all tables connected in a circle and with yellow paper and pens at each seat. Before we began, Migdalia also honored her teacher by putting a photo of Fornés on a board and placing the gift of an apple below. 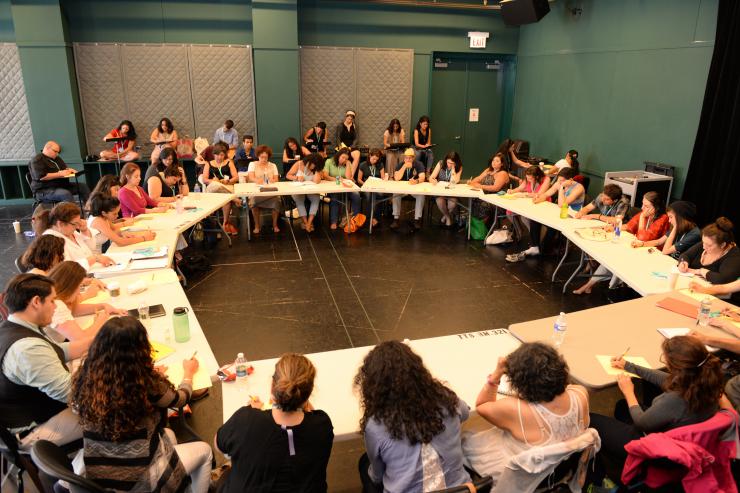 Migdalia first led us through a physical warm up that included taking deep breaths and doing some yoga-like movements in order to release tension and center the mind and body. When back at our tables, Migdalia asked us to close our eyes and guided us through a visualization exercise. She told us to look at water, then to see our ten-year-old selves and then to picture an event with our ten-year-old selves and the water. After we opened our eyes, she instructed us to draw a picture of what we visualized. 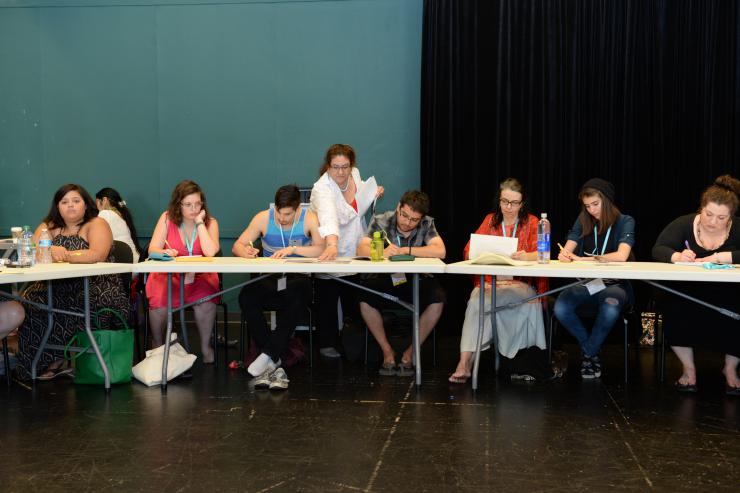 Migdalia next passed around color copies of photos to each table. She asked us to write a scene inspired by one of the photos and to utilize what we visualized as the character’s past memory. Every so often, Migdalia would say a line of dialogue, an action, or the name of an object that we would possibly include in our writing. Some of the lines included, “I doubt that anyone will come,” “I tell myself stories,” He danced with her,” actions included looking for something hidden, and taking off underwear, and objects included a book and a globe. Later, during the writing, she gave us the prompt, “It starts raining hard.”

After we finished the exercise, Migdalia asked each of us to share our name and what brought us to the workshop. The writers included a few who knew Fornes and a few who had studied or worked with Migdalia. Yet the vast majority of the fifty participants had no previous exposure to Fornés’ playwriting methods. Many shared about how the exercise helped them access deeper realities in their writing.

Marisela Treviño Orta, one of the participants, reflects:

A few years ago I took a workshop with Migdalia. I still use the exercises I learned from her whenever I want to delve deeper into a character. That’s why I took her workshop again—to learn more.

We began with our physical bodies—stretching and moving to prepare for the mental marathon of writing. It was a reminder that our bodies—our physical state—impact our minds. Then we went into our minds. Closing our eyes Migdalia asked us to recall a memory, to experience the details of sight, touch and smell. By beginning with a memory a playwright can shake writer’s block. Concentrating on the details of the world she gathers momentum. The pen, the words become objects in motion and they stay in motion. Then comes the turn as Migdalia instructed us to introduce our character. The memory becomes a living, breathing moment. Becomes present tense as our character reacts to the world we’ve crafted on the page.

We ended the workshop with one of the writers sharing a brief selection from her exercise. As a former student of Fornés, I felt very grateful that Migdalia so powerfully evoked the Fornésian spirit as she introduced Fornés’ innovative and transformative playwriting methods to a new generation.

Convening/Networking
A small group of about a dozen artists gathered for the Networking Breakout Session led by LTC Steering Committee members Tiffany Vega and Armando Huipe. It was a very informal discussion guided by questions and conversation. 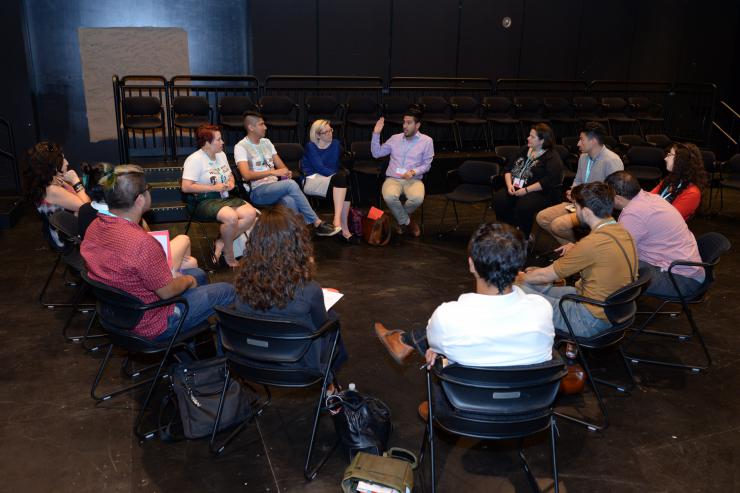 Sitting in a circle (in true commons fashion), the artists first introduced themselves.  Artists in the room came from cities all over the country: Boston, San Francisco, New York, Los Angeles, Washington DC, and even Juneau, Alaska. Tiffany and Armando discussed the trajectory and history of the LTC. They described the role that the Steering Committee and its subcommittees play in the LTC initiatives as well as existing initiatives in the field. In the interest of radical transparency (a value held by the LTC), the group openly discussed some of the questions that the LTC is wrestling with:

Is the LTC a producing body or not? What initiatives can become LTC initiatives and what do those partnerships look like? What’s next for the LTC and how can we build a sustainable and responsible movement and/or organization, while maintaining the LTC’s nimbleness, adaptability, fluidity, and a commons-based approach? How do people get involved?

Participants were encouraged to join the ever-growing LTC Facebook group, and to read Café Onda, the online journal of the LTC, as a few easy ways to connect and contribute to the movement. The group discusses the evolving partnership between the LTC, HowlRound, and Emerson College. Steering Committee members talked about what the LTC has meant for them personally, what they are learning from serving on the Steering Committee, what they are able to provide to the LTC. Interested parties were told to email LTC Producer Abigail Vega for more information on how to get involved in the LTC movement to ensure that Latinas/os are represented both on and off stage in the American Theatre.

Scholarship: The Scholars’ Circle
The discussion was moderated by Jorge Huerta, Tiffany Ana Lopez, and Chantal Rodriguez and focused on how scholars and dramaturges can document and enhance the Latina/o theatre movement. We discussed the various platforms available for us to give a presence to our movement. Since there is no category on Wikipedia for “Latina/o Theatre,” we were encouraged to change this and perhaps assign Wikipedia entries to our students as projects that would allow them to participate in broadening the movement through publicly engaged scholarship. It was also noted that American Theatre online is an important way for us to contribute to the national conversation along with Café Onda and the many peer reviewed journals in our fields. An important question raised was: How can we change what is viewed as valuable by academia? 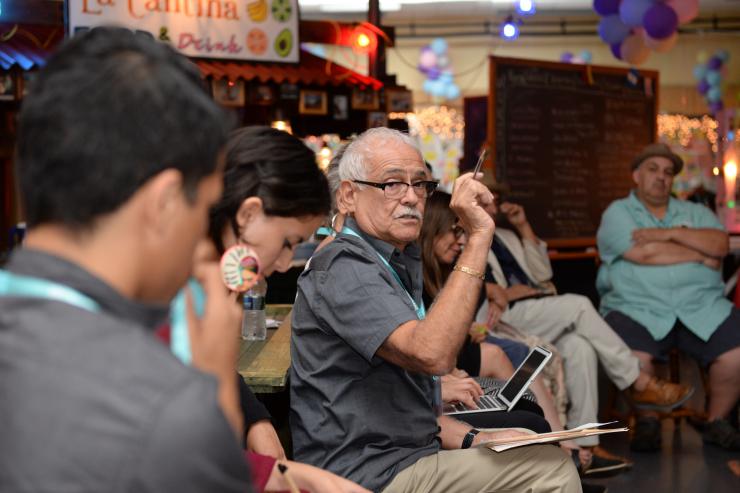 How can we change what is viewed as valuable by academia?

It is important for scholars to be involved in the regional theatres and to have theatres think about what they are doing in their seasons to reflect the faces of the New American Theatre.

We were encouraged to require our students to read Brian Herrera’s excellent account, The Latinx Theatre Commons 2013 National Convening: A Narrative Report and review it on Amazon to improve its presence. Most importantly we should teach the plays in order to get them into the curriculum and onto our departmental stages. 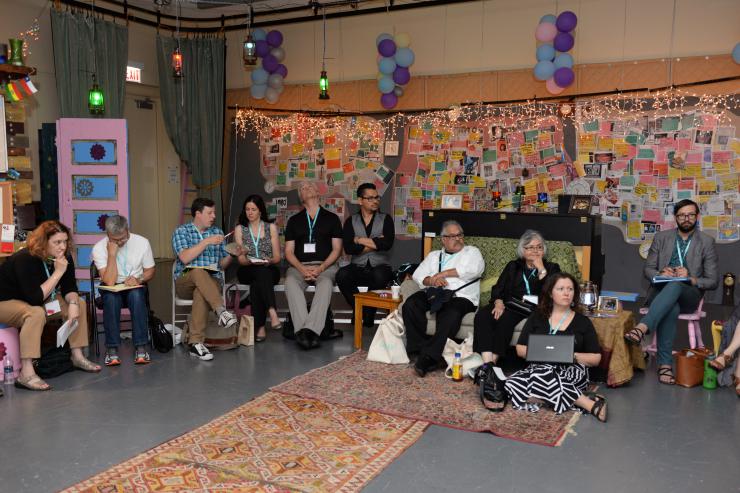 It was affirmed that we must continue defining ourselves as the New American Theatre. Lin-Manuel Miranda’s Hamilton was described as the beginning something new, because it uproots the mythology of American history. All agreed on the need to forge connections with our regional alliances as well as with Latina/o theatre companies.

***
All photos by Michael Courier.

Email this Page
Share this Page on Facebook
Share this Page on Twitter
Print
Print this Page
Most Discussed
Every Production Is a Moonshot: Research on Improving Repertoire Selection
Kristin Patton, Nick Rabkin
Most Watched
International Presenting Now: Collaborative Models, Practices, and Pathways Toward a Sustainable Future
Monday 9 January 2023
Upcoming
Artists and Scholars Consider the Intersection of Puppetry with Other Disciplines and Ideas
Saturday 21 January and Saturday 28 January 2023
Newest First

These are excellent recaps and really capture the community that the Latina/o Theatre Commons is building through HowlRound and Polly Carl's visionary leadership/commons-based approach. This is only the beginning, folks!

The Latinx Theatre Commons Steering Committee invites you to attend Carnaval 2015, July 23-25 at the Theatre School at DePaul University in Chicago.