The 2015 Latina/o Theatre Commons Carnaval of new American work ended on just the right note—a call to action and a commitment to movement.

After two jam-packed days of art and the community that makes it, and the festivities at The Goodman Theatre, featuring the work of the Albany Park Theater Project, a stellar group of youth performers, everyone was richly satisfied. I was wondering if anyone would show up early for the next day’s activities.

Promptly at nine in the morning, director Tlaloc Rivas and playwright Anne García-Romero led a large group in what was billed as a morning “Cafecito” to discuss the forming of The Fornés Institute, an attempt by many to create a space to honor the work, teaching, and spirit of one of the most revered artists in our community, María Irene Fornés. Scholar Brian Herrera from Princeton and one of Irene’s most well-known students, Migdalia Cruz spiritually ushered Maria Irene into the room by placing pictures of this most celebrated artist all over the space, with passion and focus. Not a dry eye in the house.

Something has come of age in the Latina/o theatre community—we have.

Immediately following, we went off to another space at the new and gorgeous Theatre School at DePaul University where we experienced “Los Cuatro,” excerpts from four of the curated works, moderated by dramaturgs Isaac Gomez and Catherine María Rodríguez, featuring the writing of Migdalia Cruz’s Satyricono, a fantastical retelling of the Fellini film, among other inspirations, directed by Daniel Jáquez; Siempre Norteada: Always Late. Always Last, by Virginia Grise, directed by Daniel as well, blissful urban poetry in the journey of the artist as traveler; Austin-based Amparo Garcia-Crow presented Appeal: A New American Musical of Mexican Descent, a portrait of civil rights activist Gus Garcia, directed by Olga Sanchez, who also did double duty on The Sweetheart Deal by Diane Rodriguez, a look at the United Farmworker’s Union in 1970s. The highlight of this session was the acting ensemble featuring many LTC Steering Committee members. 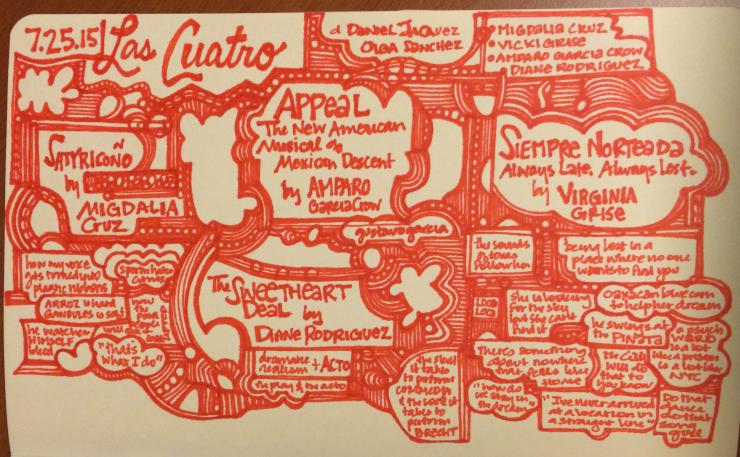 The presentation of the last two plays in this curated three days of new work began with Sweep, a mythic fantasia by Georgina Escobar, directed by Chicago veteran Henry Godinez and featuring exhilarating hometown acting by the much loved Sandra Delgado and a cast including Gabe Ruiz, Cruz Gonzalez-Cadel, and Sofia Tew. This piece could not have been any more different than what we had heard in the last three days and yet its source material—Adam and Eve, among others—took the audience from biblical times to modern day Brooklyn! 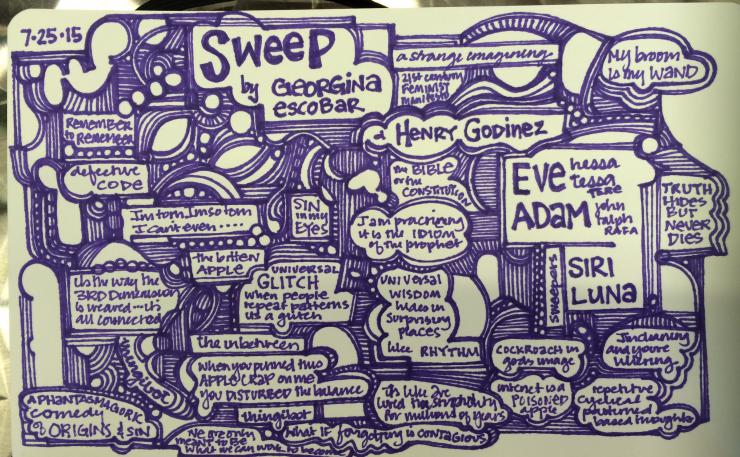 A series of breakout sessions after lunch were all well attended. I chose Scholarship, which brought together a large circle of scholars who have formed a think tank working towards documenting the Latina/o Theatre Movement. Spirited discussion, mentorship, and chisme (gossip); you couldn’t ask for anything more.

There was something very palpable in the air as participants were ushered into the main theatre for the final play of the conference, Mother Road, an epic tale with gorgeous choral work, written by el maestro Octavio Solis and directed by Juliette Carrillo—a heartbreaking major piece by this much loved writer featuring the descendants from The Grapes of Wrath who drive east to Oklahoma in hopes of keeping the family farm. A perfect punctuation to a beautifully curated conference of twelve new American works. 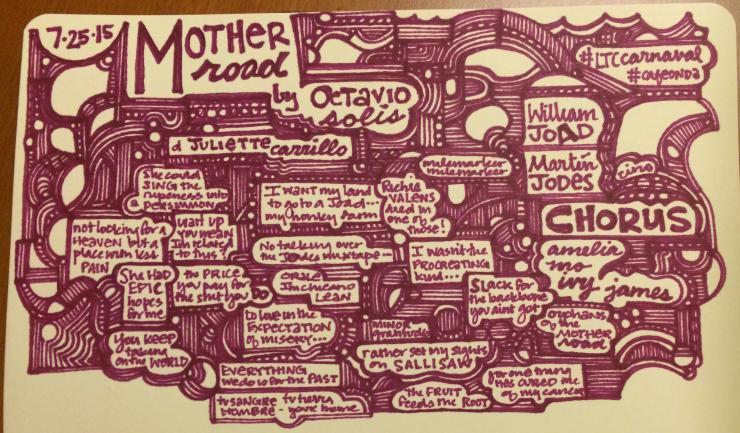 Latina/o theatre is alive and well and very much looking forward as seen through these twelve new American plays. They represent a breadth of craft, theme, and language. They signal our place in the American experience and usher in a new era for our community. Something has come of age in the Latina/o theatre community—we have.

No Latina/o event ends without a party and this one did it one better by presenting awards to five leaders who have championed Latina/o art: Juliette Carrillo through her work as director of the Hispanic Playwrights Project at South Coast Repertory 1997-2004, Henry Godinez as curator of the Latino Theater Festival at the Goodman Theatre 2002 to present, Christopher Acebo as producer of the Latina/o Play Project at the Oregon Shakespeare Festival 2011 to now, and Diane Rodriguez and myself for our work as directors of the Latino Theatre Initiative at the Mark Taper Forum from 1995-2005.

There was food, there was booze, but mostly there was inspiration in the air.

This is just the third stop on a movement that began with a concerned group of artists, started with a conference in Boston, went on to Los Angeles, then filled three full days in Chicago, and now we wait to see what city will host us next.

The community could not be more ready!

Great work that truly captures the spirit of the Carnaval!

Thank you, Luis, Olga and Georgina for assuming the task of writing about each of the 3 day event. A monumental tasks, given the density of the experience. I was very much looking forward to reading these very personal yet sweeping --oops, there it is SWEEP-- perspectives. Terrific idea to accompany each day with Brian's doodles! I feel like a voyeur attempting to peek over his shoulder...

Wonderful recap and doodles! Thank you Luis for filling those of us who could not be at the Carnaval in. Yes, our community is championing this exhilarating and forward moving work. We are oh so ready.

Olga Sanchez reports on Carnaval 2015, Day 2, sharing summaries of conversations and the three readings of the day.