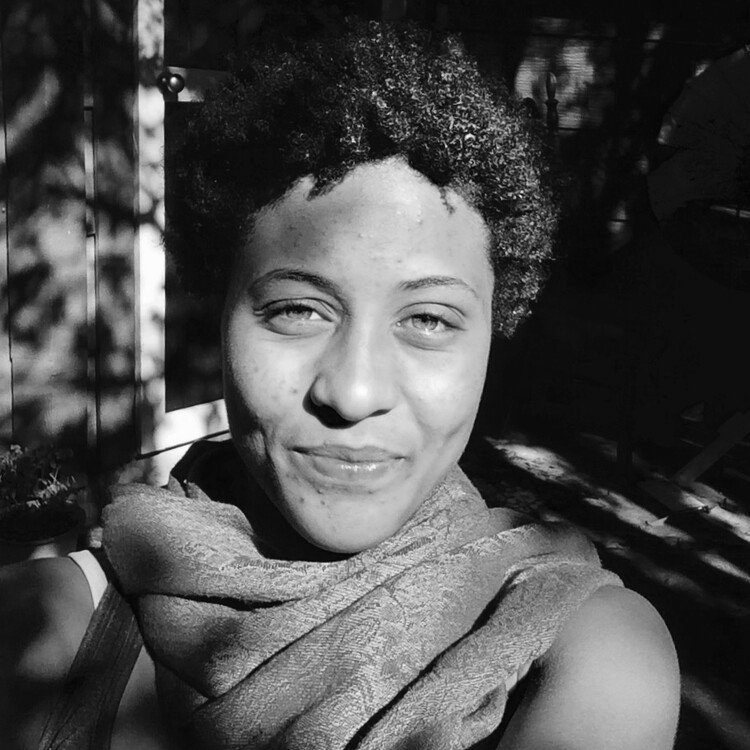 Jelisa Jay Robinson’s Stories of Us

Labels. “Mexicana.” “Afro-Latino.” “Black Enough.” Just to name a few. They’re the first thing you see as you enter the Mexican American Cultural Center (MACC) performance space in Austin, to watch Jelisa Jay Robinson's Stories of US. However, you’re distracted by the music—it pulls you in. Groovy pulses of remixed Cumbias, Hip Hop, and Salsas fill the space. You can't help but sway and smile as you watch others do the same.

The lights shift, bringing a rainbow of colors together to create what could be the interior of a club. The ensemble (Irving Calderon, Tarik Daniels, Si Mon' Emmett, Krysta Gonzales, Stacye Markey, Adam Martinez and Lori Navarrete) enters, reads the magnetic labels and begins fumbling with them—shifting and swapping them before selecting one they feel is most representative of self. Another quick move and then, “click”—their camera phones sing as they snap a selfie with their selected “identity.” Appropriate. Then, the world inverts and the actors begin to make snap judgements to place the labels on audience members. Whether they are right or not isn’t the point; the stereotype is set. And as quickly as they entered—and while the metaphorical mic hits the ground—they are gone.

This introduction forces a moment of self-reflection as the audience is left reckoning with how many times they have done the same thing—assumed someone’s appearance to be indicative of their cultural background, or ethnicity, or race, or—the list goes on.  The truth is that each label lends more definition to our differences. The more differences that are highlighted, the harder it is to find a connection.

This play is all about the connections.

Stories of Us, written by Houston-based educator and alumna of the University of Texas at Austin, Jelisa Jay Robinson, directed by local theatre educator and practitioner Florinda Bryant, and produced by Teatro Vivo, had its world premiere at the MACC from April 28th to May 8th 2016. Robinson's work is a composition of interrelated vignettes that expose the often hidden narratives of people who embody Afrolatinidad—culture and experience sprouting from the intermingling of Africans, African-Americans, and Latinas/os. As this play expresses, there is no “right” or “wrong” way to exist in this cultural space; nothing dictating the bounds of what it could or should be. There is just being.

The trouble is in the moments of disconnect within our communities, when people from a certain ethnic group perpetuate violence and disrespect towards another group. This reaction could be expected when varying groups of minorities find themselves competing for resources, respect, and (especially) romantic partners within a limited socio-geographic space. Add in the existing language barrier and—

This town ain’t big enuf fer the two of us!

Oh but on the contrary, it is.

Stories of Us exposes how these tensions wear on the experiences of those who consider themselves both Black and Latina/o, and also on those who may not identify as both but simply have an affinity for the culture of either or both groups. Stories of Us finds its purpose in reversing existing misconceptions by emphasizing the many beautiful ways that Black and Brown people are inherently tied and thus connected.

The play’s central conflict exists in a high school setting, where a major race riot unfolds between Black and Latina/o students. When Natesha, an Afro-Mexicana student, finds herself caught in the middle and asked to pick a side, she is troubled by the idea of choosing.

This shockwave of action triggers the breath that lingers throughout the entire play—the breath that strings together the personal narratives that follow and invites past into present to aid with self and communal healing.

Stories of Us primarily emphasizes historical connection through music and dance. The show's soundscape, composed by local celebrity DJ Chorizo Funk, works to bridge the gap between Latinas/os and African Americans. Music filled with traditional drum rhythms helps reassert the profound African influence in these otherwise “Latina/o” songs. Further, where music exists, dance exists too. These two elements together create the platform on which both Robinson and Bryant establish the Afro-Latina/o experience.

Robinson's work is a composition of interrelated vignettes that expose the often hidden narrative of people who embody Afrolatinidad—culture and experience sprouting from the intermingling of Africans, African-Americans, and Latinas/os.

Moments central to this concept were in mixed party settings, and featured three pairs coming together to teach the other a dance from their culture. The first pairing was a Latino boy and Black girl; she makes an effort to teach her new partner a dance popular in Black culture, the “Wobble.” She slowly walks him through the step, recommending he loosens up his hips as he completes the “cha-cha-cha” embedded in the dance. Later the scene repeats with two girls, as one teaches the other the "Cumbia.” Finally this scene repeats again with another man and woman, as the Latino male teaches his Black female partner the "Merengue" rock-step. These scenes reinforce the positive aspects of intercultural relations, but also the negative as individuals from opposite crowds stare down the mixed couples as they leave together.

This connection is especially emphasized in moments of purposeful, sustained breathing. This breath fuels the theme of interconnectedness, and finds its way into transitory scenes and impactful moments of self-realization.

When one character attempts to reconnect with her roots, she meets her ancestral spirit guide, Raíces (Roots). Having a hard time cultivating self-love because of her mixed descent, Raíces reveals to her a letter that tells the truth of her father’s disappearance—her Mestiza mother was ashamed to continue a relationship with her Afro-Latino father because of an existing stigma around his Afro-descendency. Reading his loving words of admiration and pride for his daughter, she is able to release the heartache of his absence and finds her self-expression through movement and memory. Each movement propelled by a deep breath, she slowly rolls her head, taking her confusion and letting it drop to the ground. Now grounded in her identity, she scoops from the earth to fill the pit of her soul. Her feet shuffle, leaving her in a new place from where she started. She ends by giving of herself to the audience, her leg lifting behind her while she reaches out to the audience. She begins a slow-waltz, during which her father appears and assumes the counter position. They dance together slowly, until a final exhale sends all of her guiding ancestor spirits away.

Different characters have similar moments in other scenes, where movement and breath serve as their means of dialogue. One distinct action is the light pounding of the chest, recreating a heartbeat, which then unfolds into an outward reach. Another is a drop of the torso towards the ground with an exhale, followed by an inhale and the scooping of arms as they return to standing. The inhale, exhale… It becomes a metaphor: that in order to remain full in the present, one has to channel and confront memory of the past.

The inhale, exhale… It becomes a metaphor: that in order to remain full in the present, one has to channel and confront memory of the past.

On this note I send gratitude to Robinson, as her introducing Stories of Us to the Austin landscape has been an opportunity for audiences who may not have the perspective to see straight into the heart of one living on the border—of culture, and of socio-geographic space. The truth is, this world can be as confusing as it can be beautiful, as people try to create labels and categories; to squeeze a person into a box and tie them to an identity. However, much understanding can be gained from a simple conversation.

In another vignette, a Mexicano tells his brother he proposed to his African American girlfriend. His brother’s first reaction is to reject the idea, going off of personal experience and tapping into ideas perpetuated by his family. By simply being open to his brother’s words and feelings, he comes to see his own close-mindedness and decides to give their relationship a chance.

On a larger level, throughout the run the audience was invited into greater connection and understanding through post show talk-backs. These discussions allowed audience members to respond and hear the opinions of others—much like the characters in Stories of Us. Open-mindedness is key: inhaling personal notions and concepts of the “other,” and exhaling, letting those ideas fade, as we take a fresh inhale of acceptance, and exhaling again, lending love to the space, open to what is.

And this is exactly how the play finds its close; Natesha shares that if she was to pick a side, it would be in favor of love. Hard conversation balanced with a bit of love that together foster understanding. This is the way we can all find commonalities while accepting our differences. This is the way to connection.

Love it! Thank you, Ursula!

Love it! Thank you, Ursula!