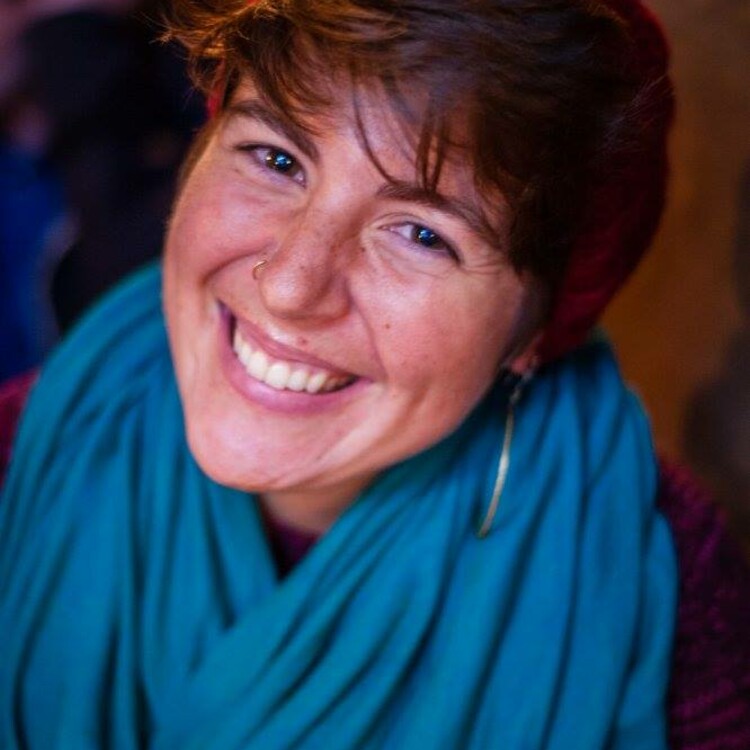 When you hear Princeton, New Jersey, “bastion of French culture” may not be the first thought that comes to mind. (In fact, according to the 2010 US Census, only 618 people were recorded as French speakers in the city, which has a population of 28,572.) However, should you happen to visit the Princeton University campus during a particular week in late September, you may have occasion to revisit that opinion, thanks to the Seuls en Scène French Theater Festival.

Florent Masse, a senior lecturer at the university, originally from Lille, France, decided to create the festival as an opportunity to showcase the works of young, contemporary French theatremakers. With tickets to the festival free of charge, Masse hoped to create an opportunity for his French students to immerse themselves in the language outside of the classroom, saying, “Cultural immersion is extremely important for language studies.” Masse, who is also the festival’s artistic director and producer, likes to imagine that much later in his students’ lives, when they are doctors or lawyers, they will remember their exposure to French theatre, and be more receptive to this form of cultural exchange.

The first edition of the Seuls en Scène festival in 2012 was a four-day stretch of French solo shows by “emerging” artists from the Conservatoire National Supérieur d’Art Dramatique in Paris, from which the festival derived its name. (“Seuls en Scène” translates to “One Person Shows.”) Since then, the festival has blossomed into a nine-day program, this year presenting six projects from renowned artists, several of whom made their American debuts on the Princeton stage. Masse sees the festival as a means of opening the Princeton community towards the world, and vice versa. He is particularly satisfied to have the opportunity to put French artists in dialogue with one another, and with American audiences.

A strong core audience developed over the course of the week, which created a sense of collective journey through the artistic works presented.

Audience members this year were comprised of a healthy mix of Princeton students, faculty and staff, and community members hungry for cultural entertainment—French and English speakers alike. Although most works were performed in French, they were made accessible to Anglophone audiences thanks to English supertitling. A strong core audience developed over the course of the week, which created a sense of collective journey through the artistic works presented, including common reference points and shared expectations of theater etiquette.

Masse makes selections for the festival by keeping up with contemporary French theatre through attending festivals in France, networking, and following the career developments of graduates from the Conservatoire. He also pays attention to work that is being produced by the Institut Français all over the world and the French Institute Alliance Française in New York, particularly during their Crossing the Line Festival. So far, most of the artists presented have come from France rather than Francophone communities around the world, but Masse is interested in expanding the festival’s scope in that direction in years to come. 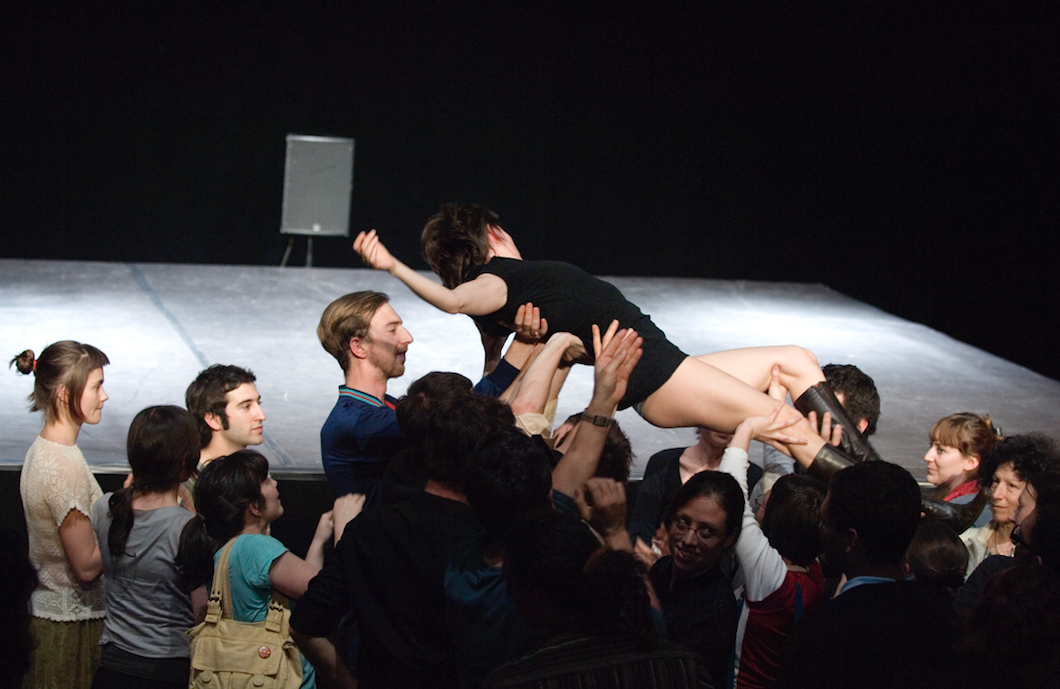 The festival has found increasing cohesiveness as the years have gone by. Masse was particularly proud of the fifth edition of the festival in 2016, where he felt the content really gelled for the first time. There was a symbiosis between the artists who attended, creatively feeding off each other as they got to know one another. Masse says this year’s programming selection had less obvious unifying themes than in previous years, although one throughline was that all the pieces presented were new creations, be they adaptations of pre-existing texts or original storytelling. This year’s lineup included works in a wide range of completion, from a staged reading of a brand new English translation by Chris Campbell of David Lescot’s Dough; to Fanny de Chaillé’s Gonzo Conférence, which premiered eleven years ago in Paris; to David Geselson’s 2016 piece, Doreen, an immersive adaption of André Gorz’s novel Lettre à D. starring Geselson and Laure Mathis. Each piece uniquely interrogates contemporary social issues; in brief, Dough looks at money, Gonzo Conférence at celebrity, and Doreen at intimacy. 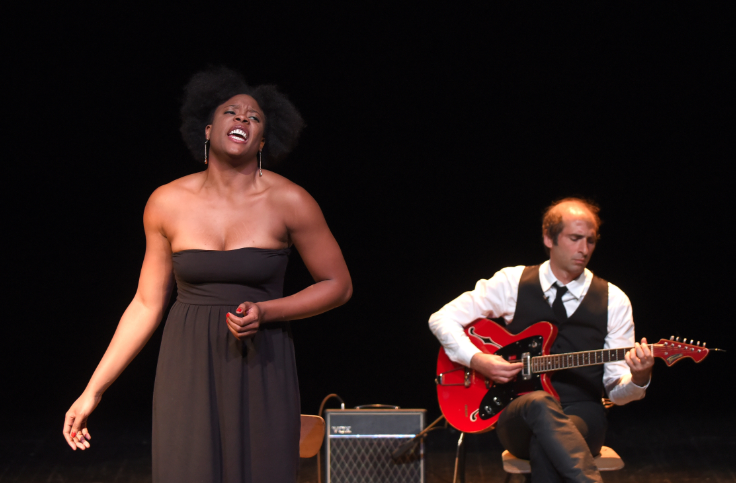 The festival opened with a condensed version of Harlem Quartet, which premiered in France in November 2017. Directed by Elise Vigier, who also adapted the English text with the help of Kevin Keiss, this all-too-timely story takes us back to James Baldwin’s Harlem as depicted in his 1979 novel Just Above My Head. The beauty and singularity of this show, for me, lies in its tenderness, particularly in moments such as the recounting of the younger brother’s first gay sexual experience, narrated in extreme close-up video portraits by the actors, as a celebration of black queer love. The play is rich like a novel, exhausting in its detail and intimacy.

Harlem Quartet was presented in conjunction with Portrait de Ludmilla en Nina Simone by David Lescot, featuring Lescot and Ludmilla Dabo. The show was commissioned by the Comédie de Caen as part of Lescot’s time as artist in residence there. He describes it as a “sung portrait,” and, as such, it is an enjoyable, educational, formal experiment, weaving Nina Simone’s biography with an experience Dabo had, as a student at the French theatre conservatory, confronting racism. 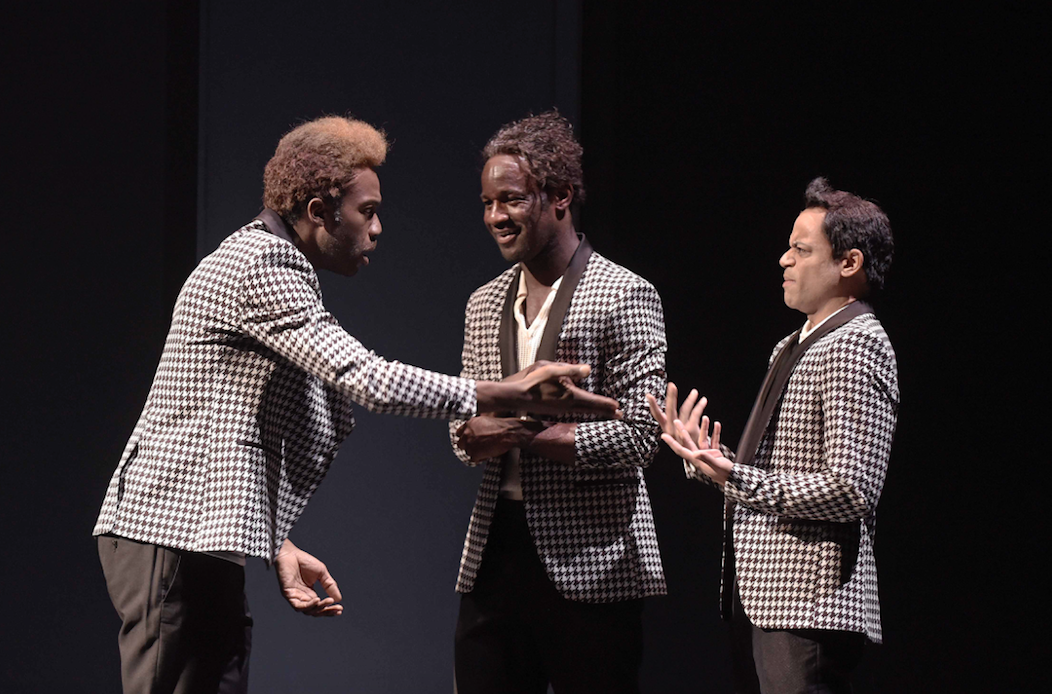 From the Seuls en Scène offering this year (as well as David Geselson’s latest work, Silence and Fear, which had a workshop presentation at Harlem Stage this summer), I have been pondering contemporary white French theatre artists’ attraction to representing black American culture on stage. My best hypothesis is that black American culture is the most easily identifiable and exportable American culture, given its wealth of artistic offerings in music, dance, theatre, visual arts, storytelling, and cuisine, as well as dramatic stories of protest and revolution from the civil rights movement (and throughout the history of the United States, for that matter). Black American artists like Baldwin, Simone, and Josephine Baker found refuge in Paris at the height of their careers, escaping the American brand of racism at home, which perhaps contributes to contemporary French artists’ familiarity with their work. There was a symbiosis between the artists who attended, creatively feeding off each other as they got to know one another.

In certain moments, the presentation of these two pieces as part of Seuls en Scène felt exploitative, or at the very least a display of cultural appropriation, particularly in the tone of Portrait de Ludmilla en Nina Simone. Given Dabo and Lescot’s cultural remove from the history and gravity of Simone’s lived experience, I wonder if it does her story a disservice to present it without more context, namely examining France’s own history of colonization and racial oppression. In Harlem Quartet, Baldwin’s words resonate so poignantly all these decades later, calling out both overt and internalized racism. And yet it felt somewhat tokenizing to have Masse proudly point out in his curtain speech the rarity of this all-black cast for a French theatrical work, with fewer than a dozen people of color in the audience to engage with it. This is not to say that France isn’t (finally) engaging in its own racial dialogue, but I am left with questions about the place of white French artists telling black American stories, and the particular resonances that cultural distance benefits from and potentially abuses. While Masse made no mention of the programming significance or intentionality of opening this year’s festival with these two performances, the effect was notable. 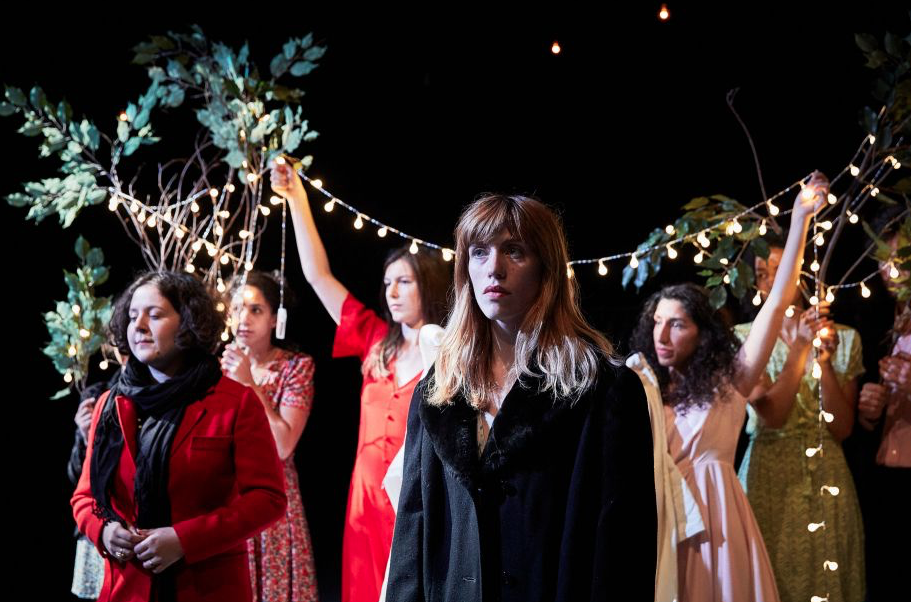 Given Masse’s longstanding relationship with the Conservatoire in Paris, it was a natural choice to invite François Cervantes’ Claire, Anton et eux to perform in this year’s edition. In this youthful and deeply personal piece, fourteen recent Conservatoire grads told stories from their lives (akin to Ping Chong’s Undesirable Elements series), peppering the audience with facts and family lore in a highly choreographed manner. In Princeton’s university context, these vignettes performed by the next generation of French actors felt particularly pertinent to the festival’s objective of cultural exchange.

Masse’s current goal for Seuls en Scène is to arrive at its ten-year anniversary in 2021. While he doesn’t anticipate the size of the festival growing substantially from its current format, given the constraints of its setting at Princeton, he hopes to grow in other directions—both in terms of audience and artists. Most of all, Masse is tremendously grateful for the opportunity to share his culture, through theatre and language, with American audiences, and provide a hub for Francophone and Francophile audience members to hear a familiar tongue onstage.

In France, Masse says, “We have tools of cultural diplomacy, which is why we see so many French shows touring abroad.” Here in the United States, where less government money is invested in the arts overall, not to mention in cultural diplomacy, perhaps the exposure to French theatre on a local stage at Seuls en Scène may prompt audience members to see more clearly the value of their taxpayer dollars being allocated to the National Endowment for the Arts.

Regardless of any political or ideological agenda, Seuls en Scène is providing a unique opportunity for North American theatregoers to take in contemporary offerings from French and Francophone stages. As the conduit bringing French theatre to North American audiences, I believe Masse deserves a good old fashioned, “Bravo!” 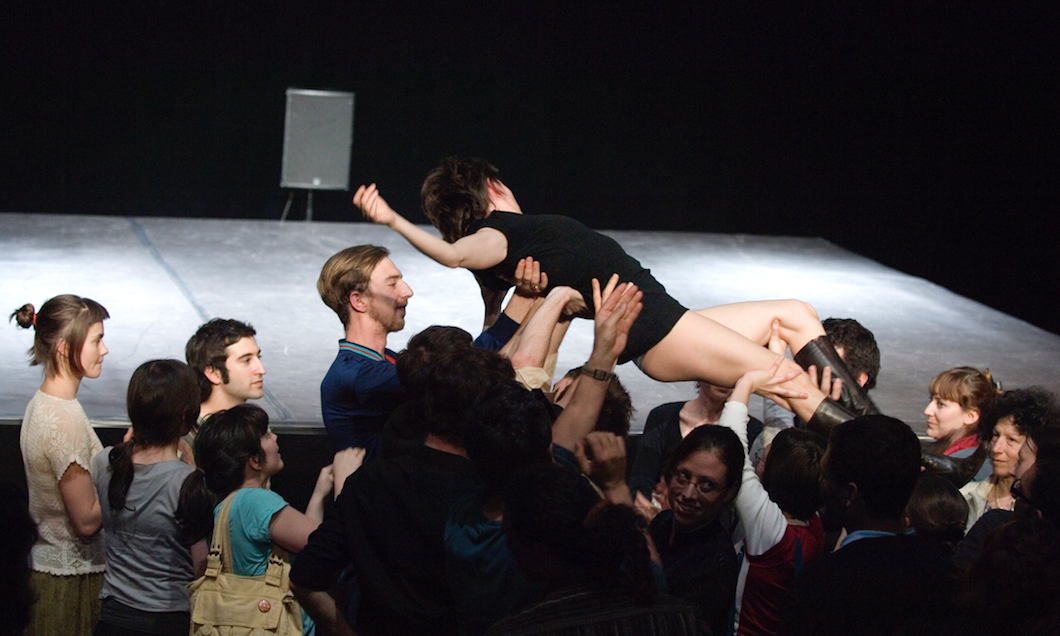