The Words of the New American Theatre: Check.

I went to Catholic school. Not because my family is particularly religious but because I was raised under the idea that “you can break the rules as long as you know the rules.” To my family, rules were meant to be broken, thoughts challenged, and ideas restructured. According to my family, people yearn to have a purpose larger than themselves, and that impulse leads to an always-going attempt to explain the universe and make humanity significant within it. That impulse and yearning to understand purpose has been behind the two branches that interest me most as a playwright—the advancement of science methodologies and the creation of modern stories. Telling stories about where we come from and why we are where we are is a moral imperative of humanism. At the launch of the LTC Carnaval 2015 that yearning—not uniquely Latina/o, not primarily artistic, but human— was once again satisfied. The LTC has once again proven the importance and vitality of its commons-based approach and the cultural footprint made by walking down that common path. In short, this historic event hosted at DePaul University is, as Enrique Iglesias popularized in the 1990s hit song, an “Experiencia Religiosa” (a religious experience).

This year, I am honored to be one of the playwrights that is presenting new work to a community that has been relentless in its generation, cultivation, and sustainable models of recourse sharing. In the midst of an information-era driven awareness of the reality of our divided country and of everyday injustices, the necessity for people to work together is real. We are obliged by a deep drive, as people, to make ourselves more than animated matter. And this festival is the expression of that literate attempt to explain, to ascertain, and to validate a group of voices and thoughts that is more and more reflective of the society we live in today. As it was repeated to attendees, Carnaval 2015 has a genesis. Once upon a time, the group known as the “8” descended upon a Washington DC room to discuss the state of Latina/o theatre in the country. The takeaway from that meeting was the list of goals generated in that room. The takeaway from hearing the story echo today was in seeing the last of those goals realized with this historic festival of new American plays in the city of Chicago. As it was said time and again today: “Check.” Or as we also say in México when reporting for duty: Presente.

It is a reminder of the in-betweeness of it all. Cultures, voices, people, stories brought together by one main unifying theme that rests on the fact that ‘between cultures’ makes a culture.

The festival, in Latino Theatre Commons style, started with an evocative and elegant welcome by the champion and head of this endeavor: Lisa Portes. That was enough to get the people in the room buzzing with effervescent energy and bubbling with questions and a drive for action. I found it particularly beautiful to hear the voices of the previous champions of the movement, José Luis Valenzuela and Chantal Rodriguez, as they “passed the torch” from DC to Boston, then to Los Angeles, and now to Chicago. The reoccurring theme of the day was that all the goals jotted down that historic day in DC could now have a “check” next to them: Mission Accomplished. Carnaval 2015, like other LTC convenings and events marks a liminal space in our emotional maps. For most of us, it is a reminder of the in-betweeness of it all. Cultures, voices, people, stories brought together by one main unifying theme that rests on the fact that “between cultures” makes a culture.

The festival opened with ritualistic ceremony, where we took a walk together, as a group, to a nearby park, perhaps signifying the same journey the LTC has taken in taking one step at a time—or the idea that in order to get somewhere you have to be willing to take the first step! We each had a balloon and the colors of the rainbow were aptly represented in them. The moment came to release them (they are biodegradable—I was very concerned) and we all witnessed their dance as they colored the big blue sky before disappearing into it. 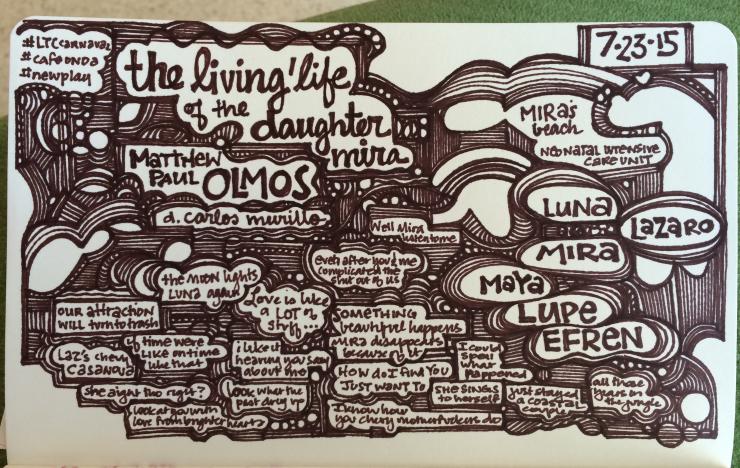 Following the release of the balloons was New York based playwright Matthew Paul Olmos’ play The Living Life of the Daughter Mira. This imaginative story captured the essence of time—or more aptly timelessness—and anchored it to a relationship between a yet-to-be-born/newborn daughter and the father that would be missing from her future life. 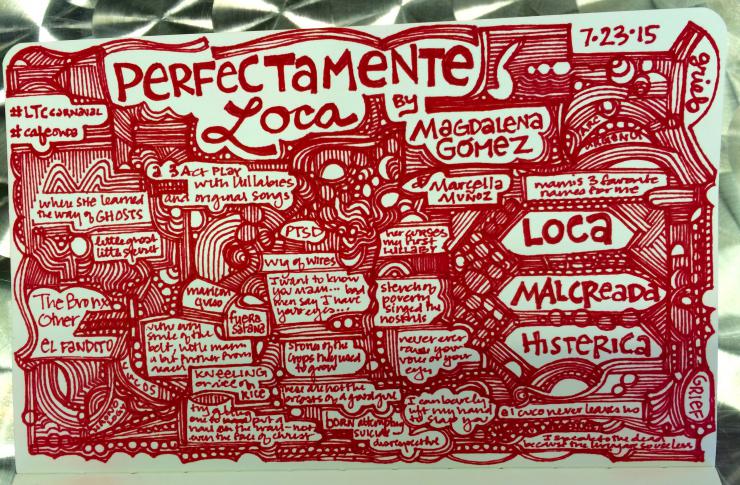 The piece was accompanied in billing by Magdalena Gomez’s Perfectamente Loca, a heart-wrenching autobiographical piece, told through song and broken moments from a broken mind. 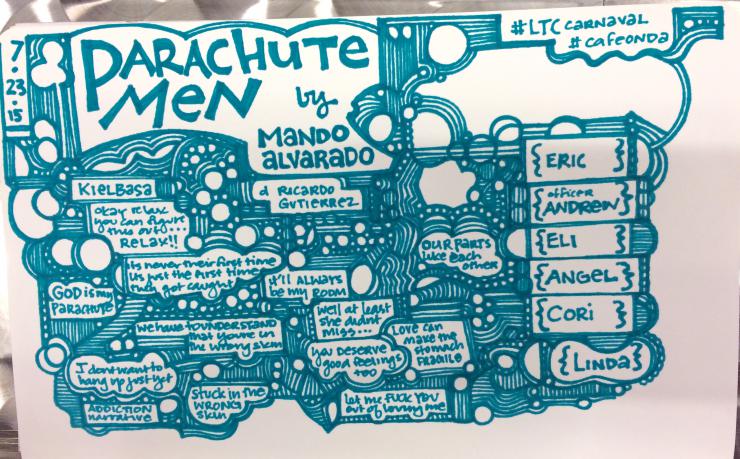 This bilingual piece started the rumbling laughter—only experienced in a shared space and in the magic that is the theatre— that would carry us into the last piece, Parachute Men by Mando Alvarado. The high-energy story about three brothers reconnecting after their mother’s suicide served as the perfect “nightcap” for the launch of the Festival.

We then made our way to Victory Gardens for Noche Victoria!, an evening of performance and song from artists from the host city, where the contribution aspect of Chicago towards the new American theatre became more than obvious.

The coming together of the “8” in DC gave way and permission for creative and radical thinking. Radical, in this context, borrowed by a definition by Henry T. Moore, described as “the attitude capable of sweeping changes in social institutions.” The convening in Boston 2013, the launch of this very platform, the Encuentro 2014, and the LTC Carnaval 2015 have all been the proof that sweeping changes are at hand. The future is now unknown. We stand before a tabula rasa and at the end of this festival, we as a commons can only hope to generate a new list, a new set of goals that we can confidently check off, moving ahead and passing forward.

Thank you, Luis, Olga and Georgina for assuming the task of writing about each of the 3 day event. A monumental task, given the density of the experience. I was very much looking forward to reading these very personal yet sweeping --oops, there it is SWEEP-- perspectives. Terrific idea to accompany each day with Brian's doodles! I feel like a voyeur attempting to peek over his shoulders. G., you have been on the Ed board of Café Onda for a long time, and it was a pleasure to work with you in this capacity. Now, however, it is thrilling to witness another side of you, that of an original and talented playwright! A huge hug.

Ay! Teresa you are so very kind. Me hiciste llorar! I just now read these comments. The Café Onda platform would be nothing without you, mujer. Thank YOU.

Great recap, Georgina! It truly was a landmark event that will propel this movement into the future!

Olga Sanchez reports on Carnaval 2015, Day 2, sharing summaries of conversations and the three readings of the day.