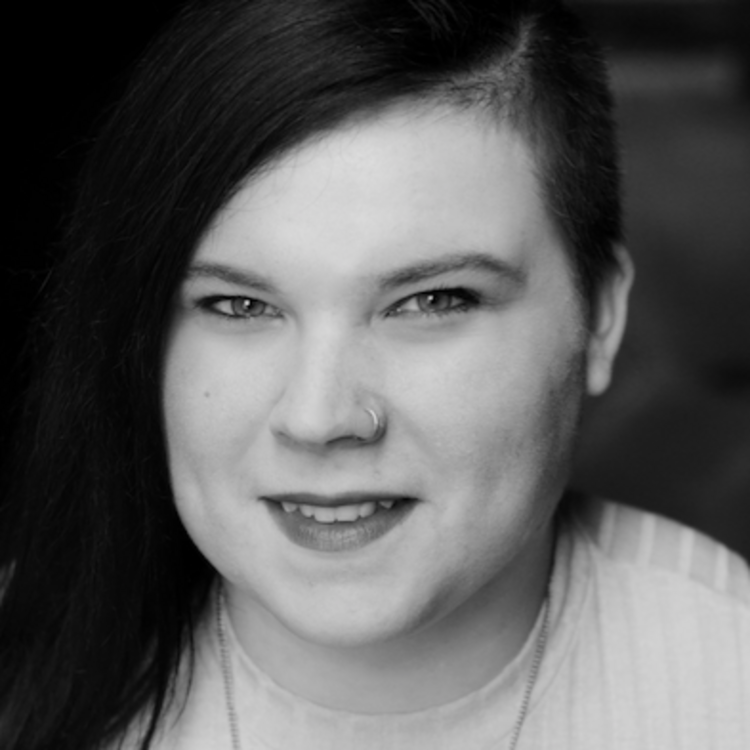 It is about two-thirds of the way through the show. Actor Noah LaPook looks to me, the stage manager, with a look of panic in his eyes. The inherent question passing from actor to stage manager is “what do we do?” Not a single child in the audience is paying attention to the story being told. Some of them are even running around the space. Some of them are drawing on the set with chalk. I sit back and send a silent answer back to the questioning actor: “have fun!”

On paper, it’s a train wreck in the middle of the show.

But this is Seesaw Theatre. And this is exactly what is supposed to be happening.

Welcome to Seesaw
Seesaw Theatre is a company devoted to producing original, multi-sensory theatre for those with autism spectrum condition and other developmental differences. It started on the campus of Northwestern University in 2012, originally under the name Theater Stands With Autism. A few years later, the company formally changed their name to Seesaw Theatre, to be more inclusive of audience members with other developmental disorders. That year, the show was called In The Game, and I had the honor of being that production’s stage manager. It wasn’t my first time as an immersive/interactive theatre practitioner or working with the special needs community, but it was the first time both of those aspects of my life merged.

Flash forward to 2017, and Seesaw has only expanded. It has become much more than just a theatre group. “I like to think of Seesaw as more of an education and outreach group, rather than just a theatre company,” says Maddie Rostami, rising Northwestern senior and current Executive Director of Seesaw Theatre.

In the same way that relaxed performances of theatre tailor their design and performance by dimming lights, cutting loud sound effects, and allowing their audience to be ambulatory, Seesaw takes these elements and integrates them into the devising experience.

For the first year since the company’s inception, events were held at multiple points during the year, creating year-round programming. In the fall, Seesaw hosted their first Inclusive Theater Festival aimed at educating the general Northwestern population about the work they’ve been doing for the past half-decade. “One of my biggest goals,” Rostami remarked, “is to create a network across campus” and this theatre festival was the first step. Instead of pulling festival participants from just the Northwestern community, this festival ended up attracting guests from all over North America to talk about the intersection of science and art through theatre. In the winter, Seesaw hosted a day-long creative drama workshop called Lunchbox, with specific programming for children with disabilities, their parents, and their siblings. As the sibling of a brother with disabilities myself, opportunities like Lunchbox are few and far between.

“This year, we’ve been able to make sure that people get both art and resources,” Rostami said. After a year of special events for the community at large, Seesaw mounted their full, original, devised performance, Under The Big Top, in May.

Before the Performance
Everything about Seesaw is devised with the target audience population in mind. Over the course of five years, Seesaw has compiled research on developmental disorders to transform that information into an experience. In the same way that relaxed performances of theatre tailor their design and performance by dimming lights, cutting loud sound effects, and allowing their audience to be ambulatory, Seesaw takes these elements and integrates them into the devising experience. What results is a performance created specifically for children with autism and other disabilities that neurotypical audience members can, and do, enjoy.

The company of actors and designers spend the year working in schools in special needs classrooms to get firsthand experience and also get to know their audience. Designers pay specific attention to the feel and color of materials, with the knowledge that these design elements will be up-close and often handled by audience members. Instead of just lowering the levels of traditional lights, Seesaw often incorporates colorful lanterns, string lights, and shadow puppetry into the lighting design.

When I asked Rostami what the cornerstone of these full-length performances was built from, she said, “the Seesaw vocabulary has two important words: assimilation room and adventure guide.”

The “assimilation room” is the first space the audience enters and for Seesaw, it always matches the theme of the show. It serves the function of easing the audience into the world, setting them up for the kinds of things they may encounter in the playing space.

These itineraries went hand in hand with the Social Stories. The National Autistic Society in the United Kingdom defines Social Stories as “short descriptions of a particular situation, event, or activity, which include specific information about what to expect in that situation and why.” Social stories were originated and trademarked by Carol Gray in the early nineties but remain a tool for people of all ages with autism. Seesaw creates Social Stories for their audience members in a multitude of media, available before the experience in both film and print versions, and as of late, on these itineraries that audience members carry with them throughout the performance.

Seesaw is built differently than relaxed performances of traditional theatre. The audience member is at the center of their experience with their consent being key.

So much care is given to the pre-show experience, with the aim of easing the anxiety that may occur in theatrical settings from not knowing what may happen next or from being in an unfamiliar space.

Under the Big Top
When playtime in the assimilation room ended, Adventure Guides gave their children a warning and the cast came in to sing an original welcome song. From there, they established the three rules that have remained consistent over five years of Seesaw shows. First, everyone has to stick with their buddy. Second, everyone says “yes, please” or “no, thank you.” Third, the goal is to have fun.

In the past, it has been the adults rather than the children who take a longer time to adjust to these rules. The worries of children being “too disruptive” or otherwise “ill-behaved” are pervasive, but Seesaw is built differently than relaxed performances of traditional theatre. The audience member is at the center of their experience with their consent being key. For example, if they want to spend the whole time on their back, gazing up at soft, dim stage lights, they are guaranteed to have an adventure guide that will gaze with them the whole time. If they want to run around the space and touch the walls of the set, they’ll have a buddy for that, too.

With the goal of a multi-sensory experience always at the forefront of the devising process, the final product had a multitude of opportunity for the audience to interact with the show. Audience members got to set up the tent, wrapping ribbons around the set like a maypole and having shimmery fabric floated above their heads. For audience members in wheelchairs, there was fabric so that adventure guides could decorate the wheelchairs in the same way the space was being decorated. When it came time to help set up the concessions, there was pink tulle for cotton candy, beanbags to feel unpopped popcorn, and yellow stress balls to help squeeze lemonade. Audience members got to encourage the Loodle—a half-lion, half-poodle—to jump through a felt-lined hoop. While going through the circus menagerie, there were shadow puppet animals to provide a different kind of visual experience. They also got to help an acrobat cross a chalk tightrope drawn on the ground, and then cross the tightrope themselves. All the while, original songs were being sung and Molly the Mime was using her many instruments to communicate.

To bring it all to a close, they unstrung the maypoles and sang their goodbye song, returning to the assimilation room.

Life After the Big Top
Seesaw Theater shows no signs of slowing. They’ve added new positions to the executive board, including the Internal Education Director, who will help make those connections within Northwestern to create an internal network. This year, Seesaw worked with the Northwestern chapter of AMASE (the Academy of Music and Arts for Special Education) during the Inclusive Theater Festival and to find new audience members for the full-length show.

Connections are being forged with the Northwestern Neurodevelopmental Disabilities Lab, where there is ongoing research about the language and related abilities that define autism, fragile X, and related neurodevelopmental disabilities. “We are part of a major research university,” Rostami said, “there’s no reason we can’t connect the arts world and the science world.” Eventually the Inclusive Theater Festival will become a weekend-long symposium.

The original founders of Seesaw have created a New York-based company, Bluelaces Theater Company. Bluelaces creates original productions for children and adults with developmental differences and offers creative drama workshops in schools in and around New York City.

One of the best things about Seesaw is that they have built up a dedicated fan base. Seesaw often has returning audience members and teachers who bring their classrooms of new students every year. Having a return audience member in the audience is like having a celebrity in the house.

Seesaw has been under the ocean, in a video game, in a made-up world created completely from string, and explored planet Earth. Now, it’s also been to the circus and back. It’s safe to say that the original, full-length productions will continue, with Rostami leading the thirteen-person, all-female, 2017–2018 executive board. While no one knows exactly where the show will take its audience members next year, it’s guaranteed to be quite the adventure.

This sounds like a great theatre company, but I have to ask, having Asperger's myself, are there people on the autism spectrum and ability spectrum on staff?

Great question! Our staff is constantly rotating, and we are limited in our potential staff members by Northwestern University's student population (which leaves much to be desired in terms of neurodiversity). That said, I believe we had two students on this year's leadership team who identify as neurodivergent, one specifically on the autism spectrum. We can always do better!