This post is the tenth column of a regular series on Parenting & Playwriting. Find the previous columns here. Here’s what my advice column will offer you: a place to ask questions and share grievances about juggling life as theatre artists and as parents. Here’s what my advice column will not offer you: much actual advice you can use. For those of you masochists longing for some truly crappy advice, email me at dctrieschmann@gmail.com or tweet me @ctrieschmann. 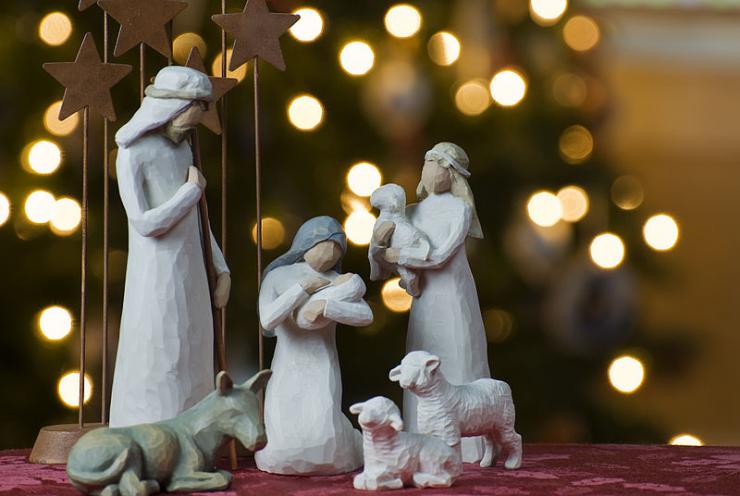 This month I need your advice.

I've never particularly cottoned to directing. The first time I directed a play, I was a senior in college, the script was my own, an actor got a concussion, the leading lady ran away with my boyfriend, and I lost ten pounds.

Truthfully, around the third week of rehearsal, I'm ready to caboose back to my writer's cave and let the director deal with everyone's sudden realization that they're going to have to say this utter crap in front of total strangers any minute now.

Except once a year, near winter solstice, I get this itch. It starts in my left eye then slowly takes over my entire body. My unease in the director's chair melts away and suddenly all I want to do in life is get my hands on that baby—and by baby, yes, I mean the baby Jesus.

I admit it's a little strange that I should want to direct the Christmas pageant so badly, when I have such little interest in directing otherwise. Part of it is that I, indeed, love the Christmas story and carols and fresh evergreen festooned around a nice neo-Gothic arch; but mostly, it's because ninety-nine percent of all Christmas pageants ever put on suck ass, and I just know I could do it better. I just know it!

The mistake most Christmas pageants make is that they either go for realism or glitz. The problem with realism is that no manner of live donkeys and hand-made tunics can obscure the fact that you're a) shivering your ass off in a churchyard beside Popeye's Fried Chicken; b) you aren't Middle Eastern; and c) you in no way, shape or form look post-partum. The problem with glitz should be self-evident, but in case it's not, let me just say, for the record: Baby Jesus does not appreciate being depicted by a white, blue-eyed American Girl Bitty Baby wearing a sequined tunic.

What a good Christmas pageant needs to do, as any theatre artist worth her salt can explain, is embrace the symbolic. Let's get rid of the tunics and headpieces, and please for the love of Jesus, keep the live camel far from me. Throw away the contemporary Christmas songs, jazz hands, and confetti and bring out the old hymns. Children singing the Coventry carol a capella in their jeans will knock your socks off, I promise. Just put Mary in a simple blue dress, and instead of re-writing Luke to "make it more accessible" just say the words as written, please. Haven't you people learned anything from A Charlie Brown Christmas at all?

The problem with realism is that no manner of live donkeys and hand-made tunics can obscure the fact that you're a) shivering your ass off in a churchyard beside Popeye's Fried Chicken; b) you aren't Middle Eastern; and c) you in no way, shape or form look post-partum.

But the Episcopalians at St. Gabriel's Church of the Bloody Sacred Heart Divine refuse to take my vision seriously. They don't even give me a proper chance. It's all secret phone calls and back room deals. No formal interview process. No resumes collected. And so I'm left having to persuade whoever appears to be in charge (not the pastor, God no, more likely, the music director) that I am the gal for the job. And for some reason, explaining to the Episcopalians of St. Gabriel's Church of the Bloody Sacred Heart Divine how completely awesome I am at the art of theatre is very, very challenging. Last year, I had to explain that while no, I am not, by trade, a director, I am a playwright, like, you know, for realz. No, I haven't had a play on Broadway, but you know, I've worked with some of the best directors in the country—I assisted Lloyd Richards twenty years ago! You don't know who he is? He ran Yale. You've heard of Yale, right? And he directed all of August Wilson's work on Broadway. You don't know who August Wilson is? Well, Lloyd also discovered Sydney Poitier. He discovered Sydney Poitier and ran Yale. No, I've never met Sydney Poitier. But I assisted Lloyd, so basically, it's like I went to Yale. You know, Yale, the best drama school in the country, I kinda sorta went there is one way of looking at it. Needless to say, I didn't get the gig. Name-dropping Yale apparently loses its power somewhere between the Rockies and the Mississippi. Especially if you didn't actually go there.

So the question this month, dear readers, is this: do I put my heart on the line and volunteer to direct the Christmas pageant again, sure to face either a) rejection plus the torture of sitting through someone else's vision; or b) the hell of actually directing the thing? Tell me what to do.

Use this wonderful column as the basis for a play about directing your dream pageant. It's hilarious. Present your play in a theater.

Use this wonderful column as the basis for a play about directing your dream pageant. It's hilarious. Present your play in a theater. Direct it yourself. Use the King James version of the Christmas story, if that's what you want. Do everything exactly the way you want. Invite the Episcopalians but don't offer them your heart or your talent. Or your royalties. (Just in case it becomes a classic. Put a lot of kids in it. Think high-quality community theater.) It could work.

I say go forth and do good work.And it will be good. Amen.

Awesome. As I open A Christmas Carol this week...in my own adaption...I entirely get the desire to express what only I see is the true meaning of a christmas fable. Also, I played the baby Jesus when I was nine months old. Do it, Catherine! - Mark Cuddy

Oh Mark, that little tidbit definitely belongs at the top of your resume. How can you top Baby Jesus?

I want you to put yourself out there again. Perhaps I could write you a letter of reference convincing the Episcopalians that you have a real sense of your audience as a playwright and advice columnist and that I have no doubt you could bring new vitality to an old story. If you do direct, I would like to come out and review the production for HowlRound.

I second this motion, and would also happily lend whatever support to your vision I could. Perhaps an entire letter writing campaign?

I agree with Taylor...I think there's a caveat here in "be careful what you wish for" especially when it comes to church. The second anyone at my church knew I did theater, I was conveniently "volunteered" for everything that involved anything dramatic, including helping people dance in the light for advent. Dancing. I in zero ways am a dancer. But that's church for you. It runs on volunteers and good will, so anyone who has any skills they're willing to volunteer will be scooped up somehow.

So, if you're really angling to get in on the pageant but it seems like too big a hill to get up, try volunteering for something else at the church involving dramatic anything...I helped kids and adults enact the scripture readings during Lent and it was hit. And then I came to a few Wednesday night dinners and discussed/did games about the relationship between church and theater.

Once they see how amazing you are, they'll never let you go.

I’m sorry, but I absolutely MUST dance in the light for advent now. I have no idea what that actually means, but I am all for it.

Taylor-- It’s a very seductive limelight, indeed. Might take a stronger woman than I to walk away. Judy--I think the solution is clear: YOU should come to Kansas and direct the pageant.

Love that you have this urge, Catherine! Must say I couldn't have imagined the result, when "invited" 25 years ago to direct "the pageant." At PHUMC, I got to work through a comprehensive children's program at the church. Other mother-artists involved were terrific and trusted the children to make their props and sing the familiar carols to their hearts' content. The children read both nativity stories and talked about the differences. I let them conceive and write the script, also a mix of the Biblical and improvised dialogue for characters. We mixed actors with narrators. A girl played Herod. They agreed, "We should have a star, and it should MOVE." A tall girl carried a pole with a stunning handmade star, and she moved. By the way, we did have boys, who loved being the scared shepherds, innkeeper, etc. Five year-old God thought he needed a beard, so we let him have one. Yes, we had bits and pieces of costumes and brought lights into the sanctuary; they embraced the theatrical. I'll never forget how much they and I loved the storytelling that night. I hope you have a surprising experience with "the pageant," one day. Good luck!

Timing is everything: a task for parents, not grandparents! Carry on.

From what I've seen, is that if you actually rock it out, they'll expect you to do it every year. Once you achieve the level of fame that can come from a glorious production of the Christmas pageant at St. Gabe's, can you walk away from under the lime light?