Stories of Race and Education in New Orleans

See these children are like clay in our hands
we be the masters of this ceremony
the crafters and creators
and every time we step in that classroom you best believe Their Eyes are Watching God
so pardon me if you will
I take a bit of an issue with a God that doesn't look like me dictating the discourse
—Michael "Quess" Moore, Lockdown

Studies suggest that children develop racial stereotypes by the time they reach the age of five. Racism is learned before our formal education begins, before one sets foot in to the classroom. However, our education system largely remains silent on the subject of racism and in doing so denies its very existence and offers no solutions for challenging it.

So it’s no wonder we grow up confused about what racism is, and why it exists. As children we feel it, we see it, we know it exists, but we can't comprehend it. Hate crimes are clear manifestations of racism but we struggle to recognize its damaging effect in its more pervasive subtleties. We sense its power in fragments of jokes, the six o'clock news, stories passed down in our families, ads, images, words—words like racial slurs we know we're not supposed to use, but also in words sanctioned by textbooks with loaded meaning and assumptions like "minority", "welfare", and "terrorist."

So it’s no wonder we grow up confused about what racism is, and why it exists.  As children we feel it, we see it, we know it exists, but we can't comprehend it.

You'd be hard pressed to find a history textbook used in a public school that includes the word racism, and even harder pressed to find one that defines it. In our confusion we drag this dirty little secret around with us. Some of us carry our weightless and invisible knapsack of white privilege while others feel the heavy weight of racial oppression. And though we can't understand it fully, we internalize our racial inferiority and superiority. As we grow older, we see how racism divides us, degrades us, and in some cases kills us. Some of us understand, all too well, the consequences of living in a racist society and yet, our classrooms are silent on the subject. Defenders of the status quo will have us believe that we live in a colorblind society. It is this belief that allows racism to operate successfully.

Post-Katrina, New Orleans has gone through one of the most extreme overhauls of public education in the country in record time. Thousands of public school teachers, the majority of whom were members of one of the country's strongest teachers unions, United Teachers of New Orleans, were fired overnight and public schools became privatized as charters schools. Mostly, black, middle class teachers, born and raised in New Orleans were replaced with predominantly white, middle class Teach for America teachers who came down to New Orleans, eager to help, but ill equipped. As a result, our children are paying the price.

Such is the subject of Lockdown, a multi-disciplinary theatre piece that incorporates poetry, traditional theatre, music, and movement. Lockdown was developed over the last three years by Voices Organized in Creative Dissent (VOIC'D), a multi-racial, multi-generational ensemble of students, organizers, teachers, artists, and lawyers that merge experiences in organizing with artistic aspirations. We came together in the fall of 2009 through Junebug Productions' Free Southern Theater Institute’s workshop, “From Community to Stage,” co-facilitated by founding artistic director John O'Neal and myself. The Free Southern Theater Institute (FSTI) is a cultural laboratory for artists and activists seeking to advance progressive social change through the arts. It is centered around the story-based ensemble theatre practices of the Free Southern Theater and Junebug Productions, whose mission is to produce and present performing arts that supports and encourages African Americans in the Black Belt South who are working to improve the quality of life available to themselves and others who are similarly situated. 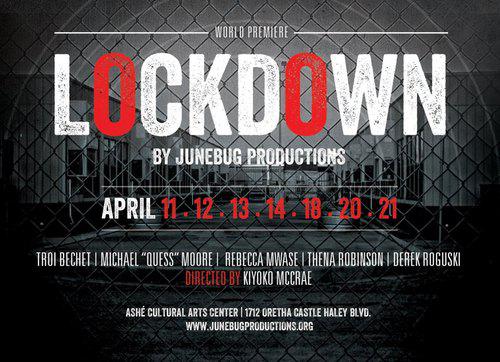 Junebug Productions' Story Circle process was used as a basis for generating performance material. James Lowewen's, Lies My Teacher Told Me: Everything Your American History Textbook Got Wrong, served as reading material to deepen our intersectional analysis of race, class, and gender and how it plays out in education. Using these methods and other dialogical tools we created the original piece, Voices from the Back of the Class, which became the seed for Lockdown. We honor the students who sit at the back of the class—who struggle to reconcile the difference between the reality of their lives and the history that is taught to them—who feel they have no voice—who have been forgotten and left behind. Through Lockdown we hope to help create a vision for another kind of education reform, one that strives to acknowledge racism’s dehumanizing effect and works to undo it. Lockdown, produced by Junebug Productions, will premiere in April 2013 at Ashé Cultural Arts Center in New Orleans.

What happened to New Orleans schools was a brazen annihilation of public education by private industries. I was sad to learn about it. This work sounds very productive. Thanks for sharing it.

The Teach for America corps in the New Orleans/Louisiana Delta region has 375 members this year. An additional 400 or so TFA alumni work in education in that region, some of whom have been there since the 1990s. TFA is actually not responsible for any teachers being fired, and certainly not thousands overnight.

If we're going to fix anything in this extremely troubled educational system, let's try to recognize who's on our side, OK?

Gracias, thanks, for being poetically candid and exploring the development of racial baggage in those early years of childhood development. It inspires my curiosity for "Lockdown." Very important to note how the largest Teachers' Union in this country of African American teachers was dissolved overnight, and it was done intentionally to disempower the Black middle class because New Orleans has been a bastion of Democratic Black power since the Civil Rights movement. Their firings were strategic and tragic. If you ever have a chance speak to Kalamu ya Saalam about this, and he is the only person I have heard note that the Teach for America youngsters that were brought in post-Katrina were the "white immigrants," who were mostly unprepared and disposable but served their purpose as Union busters. José T.T.

Thank you Kiyoko for this reflection. Lockdown is a production that's sorely needed in New Orleans. I can't wait to come and to bring my students!