Recommended
Devising Our Future
HowlRound Theatre Commons
Most Discussed
Designing Collaboration: In Search of a Taxonomy of Collaborative Methods
Emily McConnell
Most Watched
The Gathering from the CrossCurrents Festival
Wednesday 4 May to Saturday 7 May 2022
Upcoming
Livestreaming: International Exchange in a World Turned Upside Down
Sunday 22 May 2022
Essay by
Talya
Kingston
Dispatch from the Edinburgh Fringe

Dispatch from the Edinburgh Fringe, Part One

This summer I have returned to Edinburgh after a fifteen-year hiatus, to spend two weeks immersed in the theater performances of the fringe festival. I plan to use these dispatches to share some of my theatrical observations and experiences at this year’s festival. Please feel free to chime in.

The city greeted me five days ago in all its craggy splendor, fifteen years being nothing to a town that refers to the neighborhood built in the late Eighteenth Century as New Town. Many things don’t change: the magnificent architecture, the pipers on Princes Street, groups of teenage thespians cramming their props into taxis outside Waverly Station. Hell, even some of the performers are the same (though I hope their acts have changed). 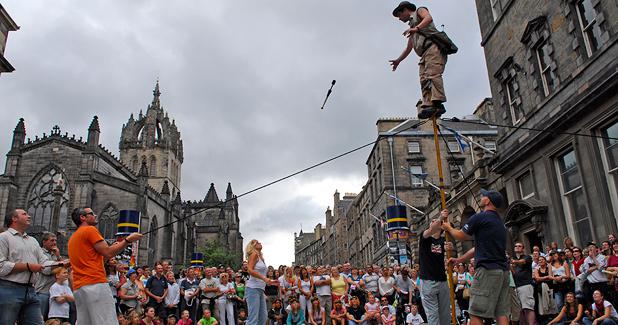 However, as I look around for the familiar performance venues, I find that many of them have moved and expanded to such an extent that I don’t recognize them. This is part of the commercialism of the festival that was famously bemoaned last year by comedian Stewart Lee. It’s a familiar story: the producers are making the money on higher ticket prices and cramming shows tightly together at the expense of performing groups. While older artists may cast nostalgic glances back at the good old days of a smaller, scrappier Fringe, Edinburgh residents also have a love/hate relationship with the Festival crowds. My own Scottish friends refer to me as a “Culture Vulture.” I smile at their sarcastic texts and claims to hate the festival—that too is part of the Edinburgh Fringe experience for me. But it’s true that I am a vulture, and I approach the fringe with a familiar feeling of mounting excitement and anxiety: with a reported 2,871 separate shows, even with two weeks, I could hope to see 2% of them at best. How can I ensure that I get the tastiest morsels?

With a reported 2,871 separate shows, even with two weeks, I could hope to see 2% of them at best. How can I ensure that I get the tastiest morsels?

Being a good dramaturg, I had done some research. I consulted friends and scoured both the fringe website and program (which is the size of a telephone directory). The key here though is to research just enough to pique your interest, but not so much that you get drawn into long video clips or reviews that eliminate any element of surprise when you are actually in the theater.

My hope is to concentrate my time on new work and innovative theater pieces. On my list are new works by Philip Ridley, Owen McCafferty, Yael Farber, and David Harrower, (many performed at the Traverse Theatre, Scotland’s year-round premiere theater for new plays). I’m also attracted to international companies such as South Africa’s Magnet Theatre (here performing Voices Made Night) and pieces that move between forms, or feature elements of audience interaction (you gotta have a gimmick). I want to approach each piece on its own terms, though I know that seeing four or five performances a day makes it too easy for one to become tired and cynical.

Since its conception in 1947, the Edinburgh Fringe Festival has maintained an open door policy for performers—anyone can perform here. For audience members this democratic principle means that it has the potential to be “a festival of discovery.” I try to embrace this theory and not limit myself to playwrights, performers, and venues that are already known to me. It’s overwhelming. After all, while strolling down the cobbled streets of the Royal Mile, you can easily collect twenty different promotional postcards from theater companies, each promising a unique, exciting experience and proudly touting their five star review. (It seems that everyone has a five stars from somewhere). Many actors hand out postcards in costume outside their venue, offering two-for-one tickets up to the last second before curtain.

If I decide to take the chance, I am whisked from the bustling streets, up stone steps into a temporary black-box space, the adorned walls of the building peeping from behind scaffolding and masking. I suddenly realize that I know nothing about what I am going to see. Publicity materials are meant to entice not explain, and unlike a regular evening theater experience, my head is often still spinning with the previous show. I look into the darkness and hope that the performers have heeded the inspirational words of playwright Mark Ravenhill, who opened this year’s festival with a hard hitting call for artists to stay away from safe choices, dream big, and speak the truth. I hope to learn something and make a new discovery; something to brag about having seen when talking to friends at the pub that evening. I saw it first.  I was there. I’ve come to this beautiful city to feast.

If you are reading this from the Edinburgh Fringe, what do you recommend? My current favorites include: Track Three by LA-based physical theater company Theatre Movement Bazaar, Quietly by Owen McCafferty which is being performed by Ireland’s Abbey Theatre, and Slapdash Galaxy: 3D by Canadian puppeteer Jeff Achtem. If I were in the business of handing out stars, they would all get five.

Dispatch from the Edinburgh Fringe

Audience Engagement
Cross-cultural Exchange and Cultural Mobility
Festivals
United Kingdom
Most Discussed
Designing Collaboration: In Search of a Taxonomy of Collaborative Methods
Emily McConnell
Most Watched
The Gathering from the CrossCurrents Festival
Wednesday 4 May to Saturday 7 May 2022
Upcoming
Livestreaming: International Exchange in a World Turned Upside Down
Sunday 22 May 2022

Having just returned from my five day 'fix' at the Fringe, reading this took me back there - and I can't wait to return. My current favorite (tho hard to chose having seen so many great shows) was No Holds Barred - Downstairs, Assembly Roxy 12.20.